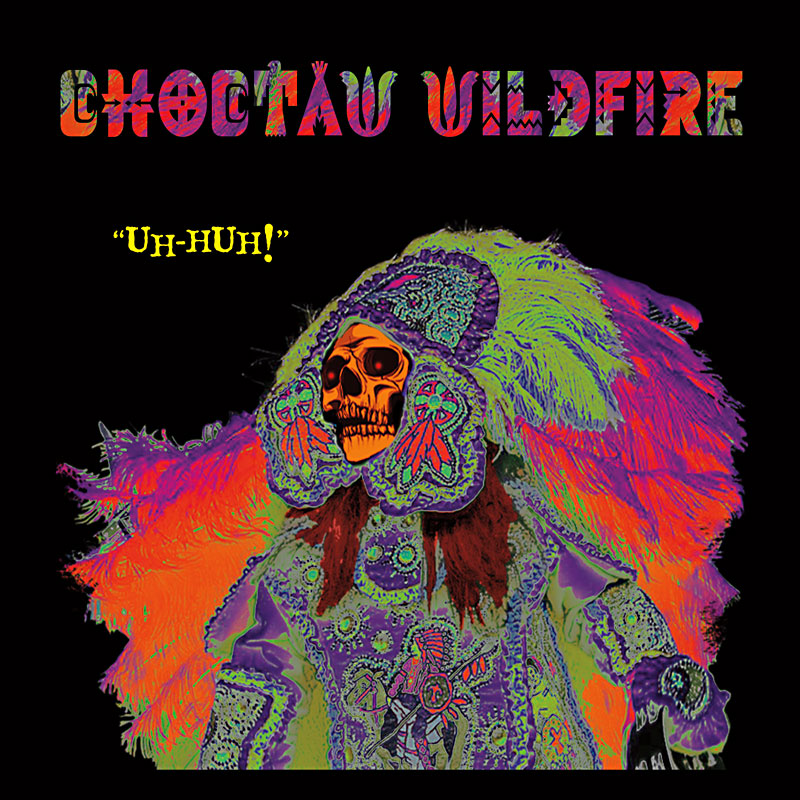 "Omnipresence," bigass word: "the presence of God everywhere at the same time." Charlie Pierce possesses such an Old Testament voice on Uh-Huh, that of the One Above or He That Dwells Down Below. No in-between here for Omniscient, the narrator. Think Orson Welles.

From the count-in on the first of eight tracks, "Say No to Drugs," Hawkeye – er, Pierce – resounds right up front in the mix: left channel, right channel, mid channel, chest cavity. "I tried saying no to drugs, but the drugs don't take 'no' for an answer/ I took a turn at falling in love with a sweet little dancer." Like Charley Crockett, the vocal fingerprints of Choctaw Wildfire's alter-ego hook the ear at every point, here his "-er" on "answer" and "dancer" taking a hard R, like "-errr."

And the substance in question spills literally, but also ingests Bryan Ferry's favorite opiate as well as most musicians' ultimate life narcotic: "I paid my dues eating up road/ Lord, it's the only life I'll ever know."

Feel Pierce hammering down on piano, too, the ambience of the room big, bold, and brassy, like they cut Uh-Huh live at the Preservation Hall in New Orleans, only with a booming drum sound off the Secret Machines. Looks like Gibby Haynes, sounds like Leon Russell, wrote one geezer, and on "Say No to Drugs," the bandleader manages the command of the former without the aid of a bullhorn, yet with the anthemic magnetism of the latter's late musical realism. Meanwhile, the rhymes pump forth as if from a hospital IV:

"I've been up for days and days that I still can't remember/ And I spent a year or so, just trying to forget her/ Wouldn't let go when she wanted to run/ Sometimes a needle is a smoking gun."

Deep, heavy, and melancholic, "Say No to Drugs" still soars, chopping white-line fever by utilizing a troubadour's credit card. "I put down a fifth today, but I only did a little bit of cocaine," intones Pierce, blowing up the last word. "And I've been driving through the pouring rain/ It's been so very hard to maintain/ I feel the devil burning my brain/ Pour me a shot to keep me sane."

At the opposite end of the album, "Dingleberry Pie" bookends an equally up-in-arms rouser, about which the Chronicle wrote last October: "The return of Choctaw Wildfire stages a raid on the white man's bathroom, pantry, and presidency, brass promenade 'Dingleberry Pie' advancing the locals' first LP since 2015's Mad Dogs & Englishmen runoff Nowhere by ticking off some 80 pie types in just over three minutes." Its profane video summarized the 2016-2020 shit show most succinctly.

"I was fortunate to catch quite a few Dr. John shows," emails Pierce about the NOLA lean of Uh-Huh. "Saw him open for the Stones once at the Aragon Ballroom in Chicago. Caught him at the Chicago Theatre as well; snuck backstage after to meet him. He nodded out mid-sentence when we spoke, which definitely wasn't out of the realm of expectation. Such an amazing performer and so much chutzpah."

Latin/rock/psych/cumbia/world-beat Austin conglomerate Grupo Fantasma put out its American Music Vol. VII in 2019, but the tour dates fell to the following year. Audiences thus missed the joys of the big band's most wide-ranging album yet, not to mention all the pent-up voltage musicians have begun unleashing. Grupo shows pulse high energy anyway, and with the opportunity to show off a strong album, this one should leave cracks in the floor from the dancing. An equally catholic rock & soul act who parlayed a sold-out residency at Stay Gold into opening gigs for the likes of Black Pumas, Nané opens, Grupo drummer John Speice IV having produced last year's self-titled debut. – Michael Toland 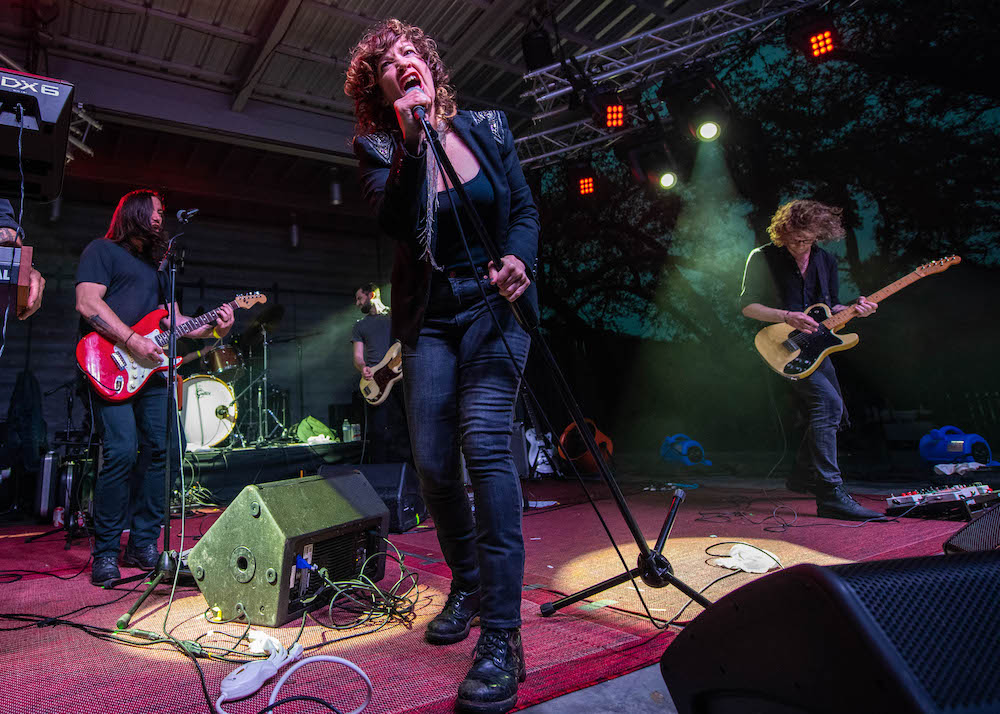 As Red River reopens, Mohawk returns with a stacked June schedule showcasing Austin's best indie acts. As Darkbird, headliners Kelly Barnes and Brian Cole dabble in both rollicking swagger and sentimental atmospherics, two ends of the alt-rock spectrum that find common ground in intensity. This duality explains the band's support: Shoegazers Blushing revel in the ethereal, while rock & rollers Otis the Destroyer nail Nineties-style organized chaos with melodic fuzz. Blow out your ears in the front or hang back from the club's top level and let this lineup remind you of all that can be done with a guitar. – Carys Anderson

Eastside rapper OTM Thraxx released nearly 15 tracks after deciding to pursue music full-time only last year. A new 90-second track premiered on YouTube last month before its June 1 upload to Spotify, "Time Is Money" acts as an introductory course to most things OTM Thraxx. A dirty guitar loop and 808s make up most of the beat for the 22-year-old to alternate various emotional states. A new YouTube video loosely centered around his recent birthday, "Chosen 1" showcases the burgeoning rapper in his preferred element of Auto-Tune-assisted rhymes as he explains hopes of overcoming various trap-related obstacles. "My name is Thraxx and I aim to make my whole city proud/ I can't let 'em make a strain off me/ Remain the same in my lane/ Imma stay a G," he declares as an elevator pitch. – Derek Udensi

True to its name, Good Morning feels like a reawakening. The soft wails and lo-fi guitar of 2020 full-length Mood Killer sink into Reece Myers' new EP, buoyed this time by a twinge of hopefulness. The Aledo native sprouts "Phase" in quick strums that dance with a replenishing atmosphere. Even the few sharp plucks of "Through That Door" uplift the dense downbeat and hint at understanding: "I had to see a different side of it." Electric buzz backs a bout of moving on in "C'est la Vie," where a stumbling beat and sickly-sweet synths meet in harmony. Relief doesn't come easy, though. "Don't want to wake up and feel this burn again," he drones on closer "Any Day Now," with a tedious, mocking mantra close behind: "Any day now, it gets better." Flowing synths erupt into a bright, glittering wave; the repetition might work. In four tracks, Myers evokes a postapocalyptic optimism: still battered, unhealed, but marveling at possibility nonetheless. – Laiken Neumann

Behind last year's Giving Up on Quitting, Rett Smith turned a more introspective ear, shifting from the heavy riffs of his band Saents and more rocking territory of 2015 solo debut Tularosa. The Lone Star native also returned to Austin after stints in Nashville and L.A., and What the Walls Cannot See, due out later this year, further hones his brooding singer-songwriter direction. Lead single from third LP The Hook, the title track plods darkly behind his understated growl and recruits Jessica Lea Mayfied to shade vocally with her Midwest twang, resulting in a richly dark ballad that imagines Nick Cave as Texan. Smith writes with a somber intensity, yet remains compellingly melodic from the sunken, gasping chasms. – Doug Freeman 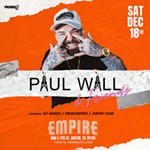