Faster Than Sound: KindKeith Has What You Need

A dreamy alternative R&B debut and a few major venue reopenings, too When a young Keith Galloway Jr. couldn't sit still in church, his mother suggested he take up a seat next to the pianist. That sage advice eventually led the Ft. Worth native to UT-Austin's jazz program, where the keyboard maven finishes his sophomore year. His own solo musical outlet, KindKeith, a dreamy alternative R&B guise, debuted full-length bow Take What You Need last Friday in collaboration with longtime friend and co-producer Ian Salazar, who Galloway calls "Skinny."

"With gospel music, you're taught jazz theory from the jump," says 20-year-old Galloway. "It felt like a job as a little kid. You have to wake up early, put on a nice suit, and then sit at the organ. So when I met Skinny, it was perfect. I was 15 and wanted to start playing in a band."

"Back in Dallas, I posted on Instagram, 'Hey, does anyone know how to play jazz keys for this indie rock band?'" recalls Salazar, formerly of Acid Carousel, who joins the call. "Within the hour, Keith had hit me up."

After moving to Austin in 2019, the multi-instrumental buddies backed indie-pop locals like Kitty Coen and Susannah Joffe. Away from home, Galloway began lovelorn experiments in pop, jazz, and neo-soul from his dorm room. The extraterrestrial production of 2020 EP Phone suited the singer's sweet, searching vocals, making way for the genre-bending Take What You Need.

"We've been trying to lean super hard into that indie, R&B-type sound," explains Galloway. "Living in DFW, I knew no one would be receptive, and Austin also lacks diversity in that sphere. But the most life-changing, important albums to me have been those indie R&B records made by spectacular Black artists, and I was always so shocked there weren't spaces fostering that energy where I live. So, I want to help make something that's nonexistent."

"Guitars are overused," says Salazar. "I'd made enough Beach Fossils-esque indie records at the time to be like, 'I want to do almost no guitar, all keyboards.'"

"'Alive' is about a fire at a high school party, when I saw the side of a house go up in flames," reveals Galloway. "It comes from my own fears, but it also comes from a place of wanting to go to parties again. Phone was straight up the experiences I was having at the time, but in writing Take What You Need during the pandemic, I wasn't experiencing anything at all."

"I was grasping for inspiration literally anywhere I could get it," says Galloway. "This record is me longing to feel stuff – getting ready to go on a date and nostalgic, pre-pandemic type shit. Like, 'Man, would I kill to go outside right now.'" 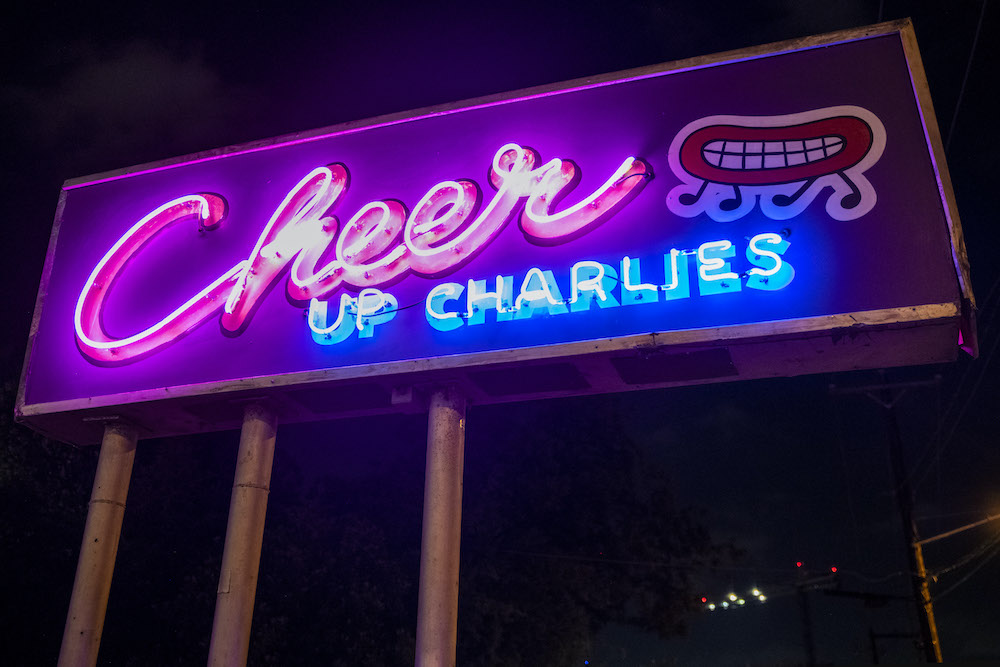 Three major Austin venues, all diligently shuttered for over a year due to the pandemic, recently rolled out reopening plans. Four hundred and twenty-seven days after closing, Cheer Up Charlies' Rebirthday Weekend proceeds this Saturday and Sunday with go-to DJs Winona Grindr, Mouthfeel, Dylan Reece, Suxxy Puxxy, and Lilith. The venue plans for limited hours and capacity during the first few months.

On Instagram, Cheer Ups shared: "We are so surprised by the way we've been remembered during the year we've been closed. We honestly got so lost ourselves, we weren't really sure if we were going to make it through the winter months as we pretty much ran out of funding ... In light of that, a huge-hearted Thank You to every one of you for the life support."

Next door, Mohawk resumes with two nights of Heartless Bastards, May 27-28, the first of which quickly sold out during a week that Stubb's kicks off full capacity with five sold-out nights of the Black Pumas. Mohawk will operate at half-capacity until August, specifying that its "once infamous bathrooms" will be thoroughly sanitized. "I couldn't think of a better place to return and play a show after a five-year hiatus, on top of what was one of the most challenging years of our collective lives," Heartless Bastards bandleader Erika Wennerstrom announced via press release.

On South Congress, the legendary Continental Club picks up May 28, announced with a marquee reading "Boom! Been Way Too Long." Owner Steve Wertheimer confirmed that sister space C-Boy's Heart & Soul is coming back, too. According to Facebook, expect the Blues Specialists during the first happy hour, Earl Poole Ball on May 29, and Casper Rawls on June 3. To track the avalanche of reemergences beyond these, visit austinchronicle.com/events.

Unveiling to the public for the first time, Downtown's Waterloo Park accompanied an August opening date with news of the first show at the new Moody Amphitheater. Brit group Glass Animals stops in on Sept. 12. Waterloo called it "the first of many concerts announced by partners at Live Nation and C3 Presents."

The Frank Erwin Center's replacement, the Moody Center, also listed first concerts, but not until next year. The $338 million arena is set to open in April 2022. Also in partnership with Live Nation and C3, plan next year for the Weeknd (April 18) and Justin Bieber (April 27). The SIMS Foundation celebrates Mental Health Awareness Month. Saturday, May 15, noon, at the Far Out Lounge, locals the Deer, Moving Panoramas, and Como Las Movies play a daytime benefit for the nonprofit, which provides mental health and substance recovery services for musicians, music workers, and family. Also in collaboration with SIMS, Ley Line and Nané perform and premiere short films May 21 at the Paramount Theatre.

Austin Music Commission proposed on May 3 an additional step for Live Music Venue Preservation Fund recipients, aiming for greater racial equity at venues. Chair Jonathan "Chaka" Mahone suggested clubs turn in drafts of their Equity Strategic Plans, a requirement of the relief program, to a group of musicians within the commission's Systemic Racism group to provide feedback "because we're going to be the ones performing in these venues." City staff said venue names would likely be redacted in this process. Equity proposals must be approved by consultant Joyce James for ongoing grants.