Faster Than Sound: KUT/KUTX in Discussion With UT Over the Future of the Cactus Cafe In 2010, UT announced plans to close the Cactus Cafe, a 150-capacity listening room located in the Texas Union building since 1979. The university cited budget concerns and limited use by students. In a tidal wave of public outcry, the student body, faculty, and music fans fought to save the space through rallies and benefits.

The widespread opposition led to a partnership with the school's public radio station. KUT booked it, while the University Unions divison managed daytime operations and the bar. Last fall, the 10-year agreement between the two parties expired.

Negotiations over management of the club are currently ongoing between the radio station, which now includes music frequency KUTX, and university leaders. The previous agreement, a "Memorandum of Understanding," has temporarily extended as discussions continue. Like 11 years ago, discussions pivot on funding, this time during a pandemic incurring losses on all sides.

Unlike before, UT-Austin understands the room's cultural significance.

"The Cactus Cafe is beloved by alumni, students, and musicians, and it is a cherished part of the campus and Austin community," said school spokesperson J.B. Bird in a statement to the Chronicle. "While discussions are continuing internally on future bookings and operations, the university is committed to continuing musical programming at the Cactus Cafe for years to come, in keeping with the venue's rich history." 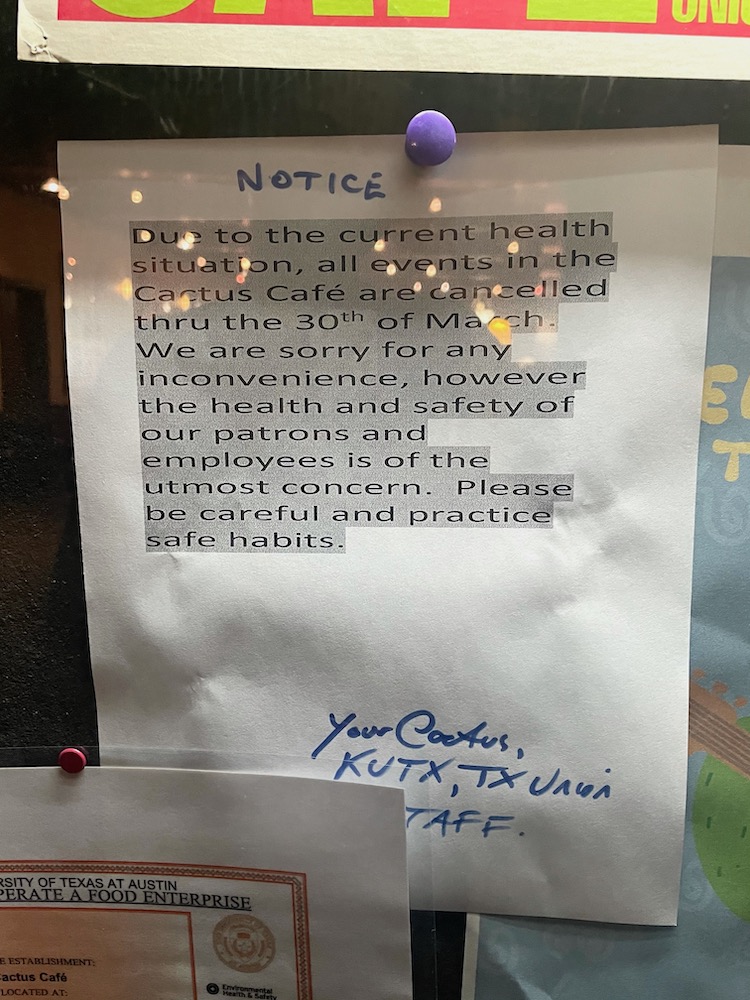 An initial shut down notice posted outside the door of the Cactus Café, which has been closed since March 2020. (Photo by Rachel Rascoe)

If a new accord isn't reached with KUT, the Unions would likely regain management of the bar. This proved the case prior to 2010, when longtime Cactus manager Griff Luneburg developed the stage into holy ground for musicians such as Townes Van Zandt, Lucinda Williams, and Lyle Lovett. Under that regime, the speculative nature of concert promotions ultimately led to the current situation.

KUTX Program Director Matt Reilly says the campus' ongoing closure delayed discussions. The 42-year-old Cactus closed last March because of COVID-19, but due to its unique status within the collegiate system, where it operates as a nonprofit, the venue couldn't apply for local or federal relief. Despite UT's announcement that students will return to campus in the fall, plans for spaces like the Cactus remain murky.

"We put forward our proposal and no decision was made," revealed Reilly. "So, we're just waiting on the next steps. We just don't have much information right now."

He declined to comment on the specifics of KUT's proposal. According to sources close to the issue, the proposal laid out plans to make up for the station's annual subsidy of $120,000 to support the Cactus. Ideas include increased bookings in larger university spaces such as the Union Ballroom and Hogg Auditorium. KUT also requested revenues from bar concessions during shows.

"Unfortunately," explained the station in a fundraising announcement last July, "the way operations were negotiated in the 2010 set-up, bar sales from all shows go to the university – which is largely how most music venues are able to break even or make a modest profit."

The station invited fans to donate directly at CactusCafe.org. The charitable appeal included testimonials from local artists including Aaron Behrens of Ghostland Observatory: "It's every songwriter's dream to sit there and have the audience actually listen and not talk. That's what I always loved about the Cactus."

Eleven years ago, UT said the venue "was underused by students and had been losing money for several years." The resulting partnership aimed to develop a sustainable business model for the room, with costs shared between KUT and the Texas Unions. Reilly now confirms that goal was never reached and notes that the main cost incurred by KUT is employment of Cactus Manager Matt Muñoz and Assistant Manager Amy Chambless, both longtime station employees still furloughed with reduced salaries.

Asked if he expects to come out of negotiations still involved with the Cactus, Reilly said he's "50-50 on it."

"Honestly, after our meeting last week, I have no more clarity on that than I did before," he adds. "This is the nature of large institutions with a lot of stakeholders: The wheels turn slowly. COVID and the University of Texas are giant things, neither of which will give you quick answers."

KUT's proposal was discussed by the University Unions Board of Directors on April 23, its final meeting of the semester. The body, composed of six students, three faculty members, and two non-voting administrators, did not decide on a recommendation. Board Chairman and UT junior Nicholas Senktas says separate proposals from both KUT and the Unions were heard.

He prefers the term discussion over negotiation between the two parties.

"KUT and the Unions have had a great working relationship – it's not really one versus the other," he says. "We intend to continue music programming, because we both realize the Cactus Cafe is an important cultural landmark for the city of Austin."

According to board policy, a smaller executive committee can act for the board during the coming summer months. In 2010, the decision to "repurpose" the Cactus occurred during a closed-door meeting of the executive committee – a move later criticized by the community for lack of transparency. All board actions must ultimately be approved by the vice president for Student Affairs.

It's unclear what Unions management of the Cactus would look like and who the board could hire to book the storied venue. Student group Campus Events + Entertainment organizes most other Unions events, with oversight from the board. E+E President Katherine Byers says her organization only collaborates with the Cactus once annually, advertising the Kerrville Folk Festival's songwriting contest.

If history repeats itself, the Cactus could use some more eyes on it right about now. On Tuesday, local author and cultural critic emeritus Joe Nick Patoski posted to social media that music historian Ed Ward had been found dead in his South Austin abode a day previously. He was 72. Amongst the first generation of "rock critics," Ward helped pioneer a scholarship of popular music in a manner previously reserved for classical and jazz, contributing to ground zero periodicals including Crawdaddy, Creem, and Rolling Stone, and later establishing long-term relationships with the Austin American-Statesman and the Chronicle, which profiled him two years ago (revisit "Ed Ward Unleashes His Second Volume on The History of Rock & Roll," Music, Nov. 22, 2019). For more on Ward, see our Daily blog for a long-form remembrance by Tim Stegall, who wrote said feature, at austinchronicle.com/daily/music.