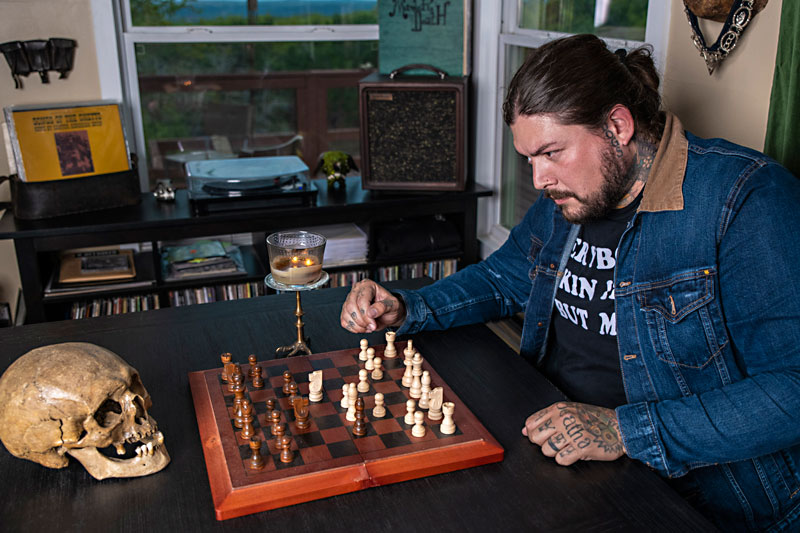 How often do you think about death?

Call it what it is, a psychologically terroristic question with which to commence an interview, but Danny Kiranos, aka Amigo the Devil, appears completely unfazed. Mur­der and mortality remain foundational muses to the emotionally visceral folksinger.

"I relate it to everything," he concedes, sinking into a patio chair on the second story deck of his house overlooking a cedar forest in outer Travis County. "I think about my youth and say, 'How did we not die that night?' When I'm unhappy, I ask myself, 'If I were to die right now, would I be unfulfilled and what does that mean?' Honestly, death's always there.

“I’m terrified of death and I would love to not be, but because it’s such a confusing and terrifying concept to me, it’s the easiest thing to write about.”

"And I'm not one of those people who immerses themselves in death and thrives on it. I'm terrified of death and I would love to not be, but because it's such a confusing and terrifying concept to me, it's the easiest thing to write about."

Kiranos' lyrical approach sometimes sounds like an open-casket serenade at his own funeral. Other times, he broaches the constant and deadly violence humans enact upon each other. Both prove a rewarding medium for the singer-songwriter, who sells out clubs nationally with an audience that sings every word and gets fan tattoos.

The Florida native began releasing music as Amigo the Devil in 2010, initially leaning on the literary excavation of serial killers and, over time, developed nuanced narratives for his clever reflections on living and dying.

"Life is a lot like a sewer, we get out of it what we put in... and that's when doubt kicks in," he sings on "Another Man's Grave" from this month's sophomore LP, Born Against. Meanwhile, the deeply affecting "Letter From Death Row" conveys love's magnitudes against a backdrop of capital punishment.

Inside the Hill Country home Kiranos shares with his partner and tour manager Alicia Simmons, death surrounds. At least 14.5 real human skulls watch over the living room, which populates with unusual taxidermied critters, several skeleton hands, and an old book bound in human skin. The 33-year-old counts himself a collector of oddities, remains, and "murderabilia."

Holdings in the latter category include four John Wayne Gacy paintings, a handprint from cannibal Issei Sagawa, prison letters by Ted Kaczynski and Richard Ramirez, autographs of Jack Kevorkian and O.J. Simpson, and final correspondences of death row inmates. Living amongst bones and killer artifacts informs Amigo the Devil's adept ability at conveying the feral side of the human condition.

Even so, the alias owner makes it clear that, while he's still interested in writing about dark things, he now adamantly wants to avoid being gratuitous. Looking back at his early EPs, he blames himself for relying too much on the shock value of exploring taboo subject matter – like singing from the perspective of Jeffrey Dahmer.

"I'm not saying the world is more violent now than it has been, because we've had eras of humanity that are way more violent than we are now," he explains. "The difference is we have complete and immediate access to that violence."

When broaching the topic of serial killers, he's resolved to focus more on the emotional investigation: documenting the lowest standard of humanity, identifying the missing link – often mental health – and bringing the conversation toward understanding and empathy. Like many of us, Kiranos felt his walls closing in during the pandemic.

"I don't like being home," reveals an artist who spent most of the past five years he's lived locally out on the road, touring. "Not because I don't like home, but because I've never liked being in one place. This was the first time since I was 15 that I had to stay home. I spiraled into gnarly depression."

Pre-pandemic, he assembled an album's worth of new ATD material, but suddenly it "didn't make sense anymore," so he wrote an entirely new set of songs that became Born Against. Admittedly, part of his decision to record pivoted on lifting himself out of that funk.

"I knew recording was going to throw off my shitty routine of sitting here playing chess for nine hours a day and crying in between matches," he laughs.

At Modern Electric Studio in Dallas with Beau Bedford, original nucleus of A-list backing band Texas Gentlemen, Kiranos expanded the dynamic possibilities of Amigo's sound. At its core, Born Against could easily pass for top shelf coffee shop material from a song crafter with a beautiful voice and notebook full of swing-for-the-fences lyrics. Yet the songs also contain distinct production touches: soaring backing vocals on "Different Anymore," a carnie brass section behind the agnostic "Quiet as a Rat," and a percussion track consisting of only rhythmic heavy breathing on "Drop for Every Hour."

The latter cut, plus song-suite companion "Better Ways to Fry a Fish," details a blood-soaked scene of calculated torture and murder. Wait, what happened to not delving into gratuitous violence?

"I've always wanted to do a song about [early 20th century serial killer] Albert Fish, but I didn't want to write from the perspective of someone who harmed children," reasons the author. "So I flipped it: what if the father of his victim Grace Budd snags Albert Fish before the cops do and he gets revenge for his daughter?"

Like Quentin Tarantino rewriting the Manson Family script in Once Upon a Time ... in Hollywood, Kiranos finds moral ground in the darkest side of humanity.