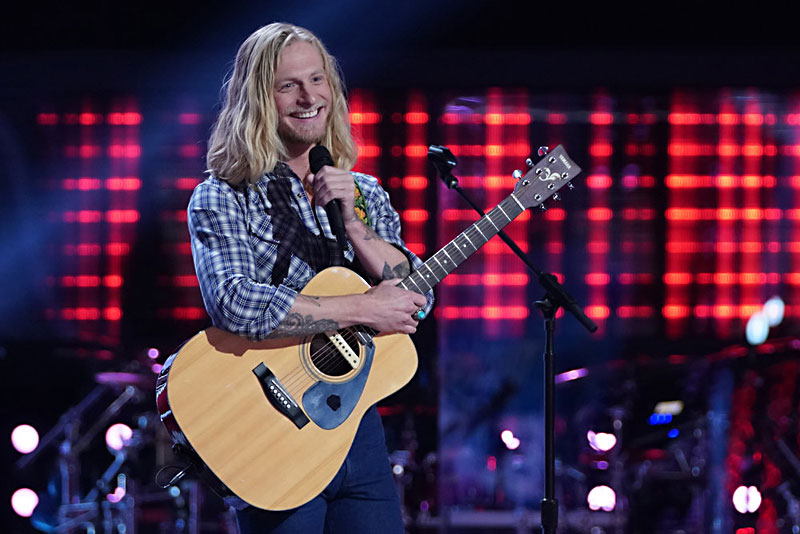 Jordan Matthew Young on The Voice (Courtesy of The Voice)

National competition television couldn't have come calling at a better time for Jordan Matthew Young. The bright blond blues rocker received an email from recruiters for NBC franchise The Voice a year ago, as the state capital entered lockdown. One of the myriad honky-tonk locals muted by the gig fallout, the 35-year-old bandleader and side player returned home to Utah to work for his family's construction business for the remainder of 2020.

When the invitation finally arrived for the program's new season – 20 – Young quarantined upon arrival in California.

"I was swinging a hammer, busting ass all day," says Young, formerly of Utah trio Candy's River House. "I was staying at my dad's house with my step-mother, two half sisters, a cousin, and her boyfriend – like seven of us. Staying in the hotel room alone was kind of incredible. It was just total silence, my own bed, my own bathroom."

On his debut episode, he played Keith Whitley's "I'm No Stranger to the Rain" before a surreal wall of virtual audience members. Young says producers sent him a "pretty rough list" of Top 40 options, on the bottom of which he wrote in the track as an upbeat alternative to other Whitley ballads on the sheet. In the tryout, Young received offers from coaches Nick Jonas, Blake Shelton, and Kelly Clarkson, who labeled him old-school country. 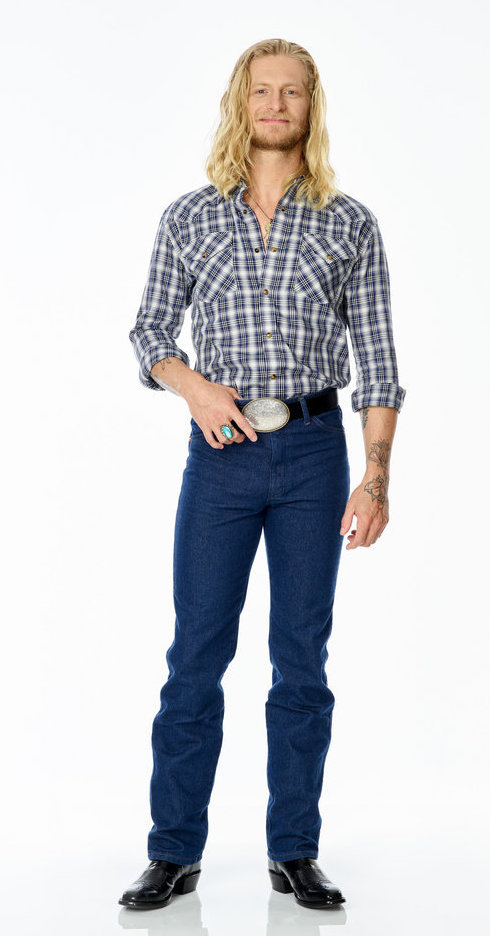 Courtesy of The Voice

Shelton, who Young chose as his coach, described him: "Like Eric Church ... with a deeper, baritone-sounding voice."

Celebrity judges likely weren't aware that boots and belt buckles can indicate any number of genres in the Austin scene, especially among long-haired guys who punctuate sentences with an earnest, "You know what I mean?" Alongside their own Southern rock originals, Young's troupe of Bryan McGrath, Sam Powell, Drew Scherger, and Adam Johnson cover the gamut, from ZZ Top's electric blues to Al Green's slick R&B. The gravel-voiced bandleader says he met most everyone he knows at Tate Mayeux's former Hard Luck Lounge Tuesday song swaps after moving to Austin five years ago.

"I can sing country, but I'm not a traditional country guy at all," says Young, featured on February's Mayeux & Broussard track "Leavin' and Losin'." "It's been cool to show the coaches that, because I love Patsy Cline, but I also play the Stones and Van Morrison. If I'm going to be anything, it would be a blues and soul guy."

Monday's episode proved Young's range on Train's "Calling All Angels" in a battle against Keegan Ferrell. The local's win upped his standing in the ongoing season. The judges complimented Young's white bell-bottoms, as well as his onstage ease.

"You're just cool, man," surmised Jonas. "You've got that grit I could never pull off. Blake, I would say Jordan has a shot to make it all the way to the end of this."

While his TV self progresses, Young is back in Austin, working on a new album with Band of Heathens mainstay Gordy Quist. During our interview, he enthused over purchasing an unopened copy of the Doors' L.A. Woman in the 99 Ranch parking lot, in preparation for vinyl hosting at Long Play Lounge East. He's rebuilt residencies at the White Horse every Sunday and South Congress' Sagebrush every other Friday (including tomorrow, April 9).

Ever since a Lyft driver suggested he and his girlfriend check out the Horse during a preliminary local visit, he's never looked back.

"Places like the Sagebrush and White Horse have kept me able to buy groceries this year, and supported me so much since I moved here," he says. "Austin [offered] everything Nashville had without the caustic, competitive mentality. It's just a huge sharing community of, 'If one of us makes it, we all make it.'"

While his supporters watch along, Young refuses to tune in.

"Straight up, I'll never see it," he says. "When I saw the first YouTube video had, like, 700 comments, I did not want to know what they're saying. So I just go about my job, playing music every day, and hopefully what I did on TV turns out good. I showed up, sang as best I could, and tried not to look like an idiot." 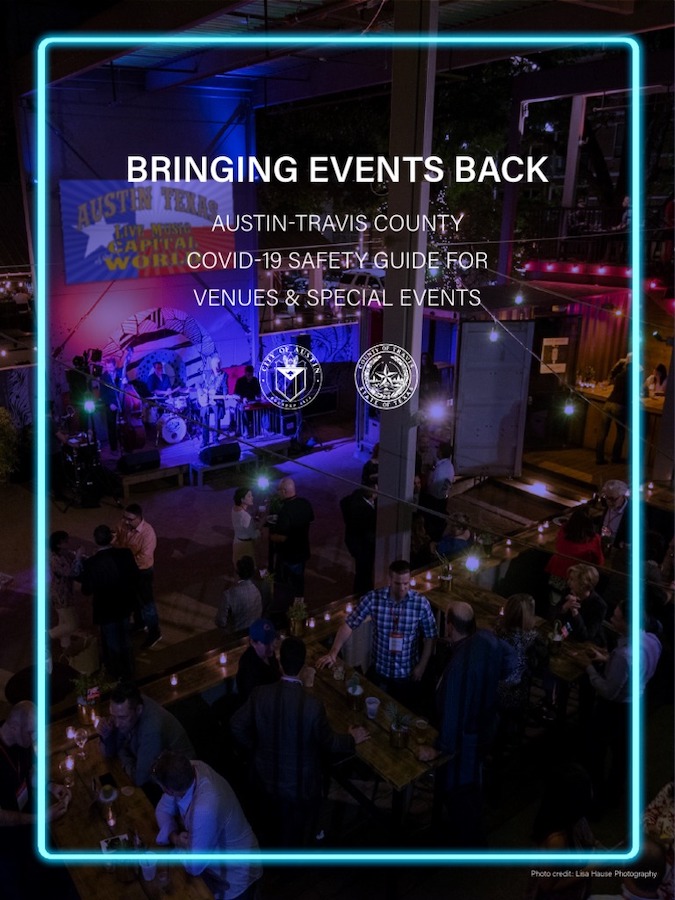 Courtesy of City of Austin

Following last month's virtual festival, South by Southwest announced plans for an in-person event March 11-20, 2022. With input from Austin Public Health, the press release included a statement from Interim Health Authority Dr. Mark Escott: "I'm very confident South by Southwest will look normal, or near-normal next year." On March 19, APH also chimed in with their own reopening strategy in a packet called "Bringing Events Back."

The guide recommends all events and venues assign a safety coordinator to oversee enforcement of protocols, report positive cases of COVID-19, and, most interestingly, provide an "isolation room" to remove people exhibiting symptoms during an event. The memo also announced that the Austin Convention Center and Palmer Events Center can now operate at 25% capacity.

Oblivion Access announced new dates for May 12-15, 2022, teasing expansion "across 8 iconic music venues in Austin." Local co- runners Dusty Brooks and Dorian Domi said they reconfirmed the majority of the 2020 lineup, previously announced to feature Swans, Carcass, Youth of Today, Converge, and others. UtopiaFest also announced plans to move forward with its 12th year, this October 14-16, with a reduced 1,000-person capacity at Reveille Peak Ranch.

One World Theatre is in talks with new investment partners, but there's no deal just yet. Last week, local outlet Austonia reported famed podcaster Joe Rogan purchased the West Austin music venue, with plans to turn it into a comedy club. Multiple sources have confirmed to the Chronicle that no agreement or sale has been settled.

Hartt and Nada Stearns opened OWT in 1999. Sources say the owners, who did not respond to requests for comment, are still considering options following financial difficulties due to COVID-19. Sale speculation follows the recent opening of formerly NYC-based Creek & the Cave comedy club in the vacant Barracuda space at 611 E. Seventh. Lana Del Rey joined Nikki Lane onstage last Sunday night at Sam's Town Point. The duo, backed by Charlie Sexton, performed "Breaking Up Slowly," featuring local Lane on Del Rey's new album Chemtrails Over the Country Club. In a recent interview with Rolling Stone, Lane teased an upcoming project with Del Rey: "She wants to lean into country and I love that. We've been writing songs driving around in an F-150 in Texas."

Mayor Steve Adler, City Council members, and venue representatives joined forces Monday to oppose House Bill 3813. During a press conference at 3ten ACL Live, the group said the bill would take away residential communities' ability to broker agreements with music venues regarding noise levels. Read more about the bill in our News section.