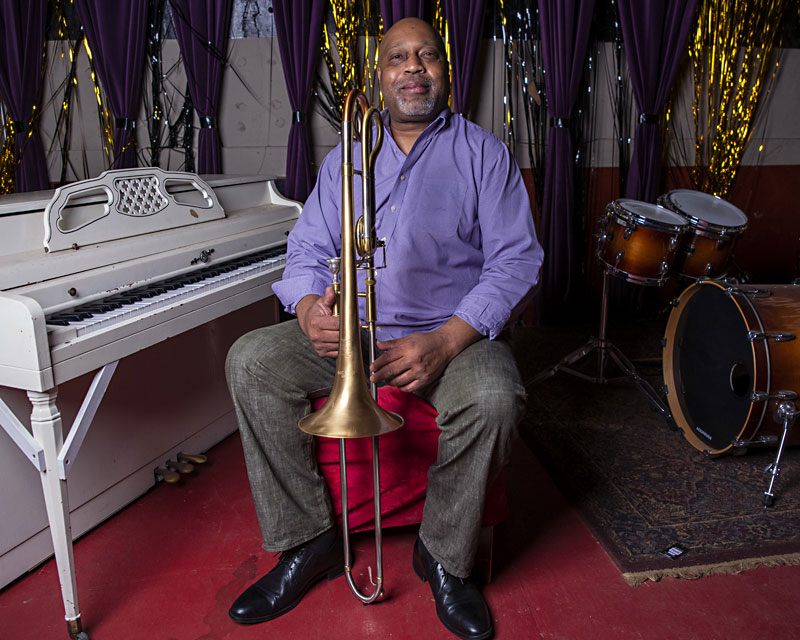 Standing onstage with saxophonist Elias Haslanger's local quintet, Andre Hayward preps for his moment. As the two men finish a harmonized riff on the bandleader's "Smiley's Stairs," Hayward lifts his bell to the microphone to take the first solo. The trombonist sticks close to the melody at first, adding slight variations, before scattering flurries of notes that belie their creator's relaxed state.

At the point it all threatens to veer too far outside, Hayward brings it back home, gracefully recasting the melody and setting up Haslanger's own break. Though there's no live audience, Hayward earns enthusiastic applause from his bandmates.

"His nickname is Big Butter," says Haslanger about his longtime friend. "He's got this incredible buttery sound, big and warm and fat, but it's not at the expense of crisp articulation. His approach is just wonderful. There's nobody that hasn't listened to him without saying, 'Man, this guy is just great!'"

“He’s got this incredible buttery sound, big and warm and fat, but it’s not at the expense of crisp articulation.” – Elias Haslanger

"He's got so much melody and history and the language within him," says Monks Jazz proprietor Collin Shook, whose trio backs Hayward often. "At the same time, he's got so much mastery over it that it's almost new. With that effortlessness and versatility, he can hit anybody's gig and fit the vibe."

"Before the pandemic, he's getting calls from Josh Redman and Esperanza Spalding, and still touring with Ellington, and [doing] spot sit-ins with Wynton [Marsalis]," Haslanger notes. "He's one of the individuals in town that isn't just making an impact locally, but across the world."

The future Big Butter arrived in Houston 48 years ago. His father sang as a music minister at his uncle's church, and he joined his siblings in the gospel group the Hayward Singers, who released a couple of singles in the Sixties and Seventies.

"Gospel music was my foundation," affirms Hayward on the upstairs couch at East Austin Piano Shop, adding that his mother's brother turned him toward jazz. "Uncle Don would pick up the guitar and play tunes. He was a big fan of Wes Montgomery. He would also talk about music theory, so I was hearing about seventh chords, ninths, suspended chords – all these little fancy terms that gravitated me toward the music."


Thanks to his family, Hayward grew up loving music. Even so, he didn't consider becoming a musician himself until his mom convinced him to join the Holland Middle School Band. All the sax spots were spoken for, so he chose the trombone.

"My mom bought me my first horn," he nods. "We went to a pawn shop. It was a Conn Director, a used marching trombone with a copper bell. I played on that for many years."

At the band director's request, Hayward also picked up the tuba and euphonium, but the trombone held a special attraction.

"It's one of the instruments that's closest to the human voice," he says. "It all ties into growing up hearing my family sing. I was never interested in the pyrotechnical aspects. I've always tried to approach it like a voice and tried to sing through it. It's an instrument of the ear, so it really challenges you and keeps you humble."

“[Trombone’s] one of the instruments that’s closest to the human voice,” says Hayward. “I’ve always tried to approach it like a voice and tried to sing through it. It’s an instrument of the ear, so it really challenges you and keeps you humble.”

Hayward went on to Houston's Kinder High School for the Performing and Visual Arts, alma mater of his parents, aunts and uncles, and home to the beloved Kashmere Stage Band (revisit "Kismet in Kashmere," Screens, Mar. 12, 2010). Although he played in both the jazz and wind ensembles, he stayed only a year-and-a-half. During his stay, he managed to study with the school's famed band director and Kashmere founder Conrad Johnson.

"I was cuttin' up in class [laughs], not getting my academics together, because I was spending so much time in the music area," admits Hayward. "So I had to leave and go to Furr High School, but that short time was enough to keep me motivated and inspired to practice. [Johnson] gave me a solid footing on jazz vocabulary. We would have to write a 12-bar blues for a homework assignment and bring it in to the next class.

"That was when I really started to get serious about improvisation." Hayward attended Texas Southern University next, intent on getting a music education degree. Fate intervened. Following a performance at a Dallas high school for a collegiate jazz festival, the trombonist found himself in a jam session in the hotel lobby. Another invited player, one of the hottest names in Nineties jazz, joined in.

"I normally play with my eyes closed, but as I get down with a solo, there's Roy Hargrove standing to my left giving all kinds of compliments and praise," recalls the Austinite. "He says, 'Give me your number. I'm gonna pass it on to my manager and I'm gonna call you.' I'm like, 'Man, this is not gonna happen.'"

Hayward laughs, but he didn't back then when two months later he received a summons to join the Waco-born, Dallas-reared Hargrove in Madrid. That vaulted the 19-year-old from local gigs to his first European tour. He also recorded his first album with the late trumpeter, who died from complications of kidney failure in 2018 at the age of 49. 1993's Of Kindred Souls maintains their initial summit.

"I credit Roy with starting my career. I truly miss him," laments Hayward.

Lured to Boston after his stint with Hargrove by the offer of a scholarship at Berklee College of Music, Hayward instead joined Illinois Jacquet's big band until the saxophonist's death. Likewise, fellow Houstonian and trumpeter Barrie Lee Hall Jr. brought him into the Duke Ellington Orchestra under the direction of the legendary bandleader's son Mercer.

Then came the phone call of which many musicians dream: Jazz at Lincoln Center. Recruited by trombone section leader and former Austin resident Ronald Westray in 1999, Hayward joined as third chair in New York's most prestigious standing jazz gig. Challenging doesn't begin to describe the experience.

"You're basically thrown into the fire," says Hayward. "I've got Ron Westray in my ear, and Wynton pulling me to the side, saying, 'Stop bullshitting' [laughs heartily]. I knew he meant business, so I said, 'I'm gonna take this music to the hotel room and get these parts together.'

"I liken it to grad school. You're getting your reading together, you learn how to play in a section, how to improvise, how to conduct yourself on the bandstand. I just learned so much." 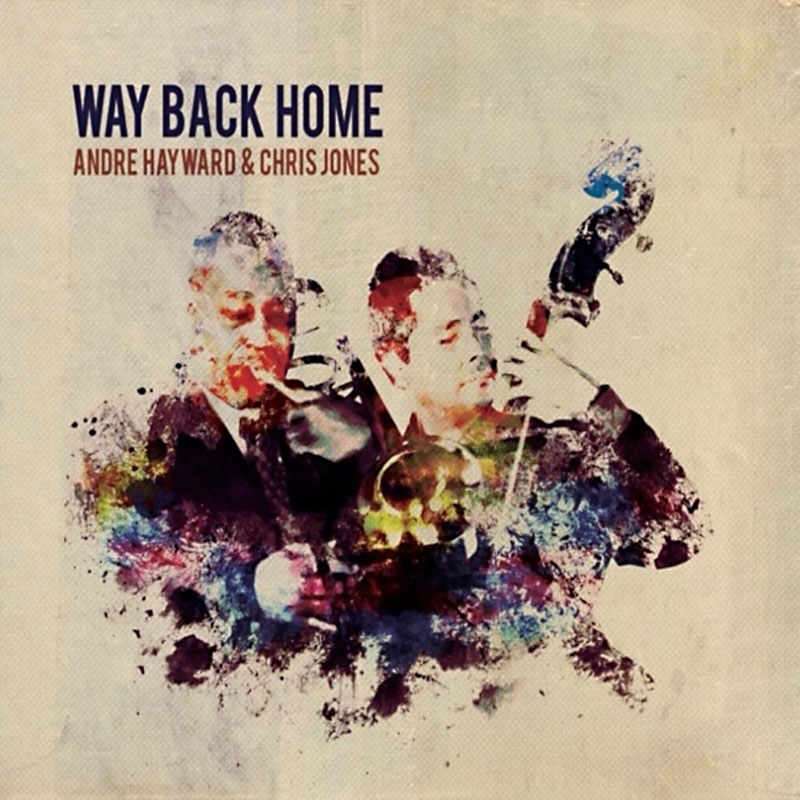 Hayward appeared on five albums with the LCJO, including the group's expansion on John Coltrane's A Love Supreme and the ambitious 12-movement piece All Rise with the L.A. Philharmonic. After seven years on the East Coast and ready for a change of environment, he joined the San Francisco Jazz Collective for two seasons. Hayward contributed two originals to the ensemble's repertoire, "Serene Intentions" and "Peace Offering" (see sidebar).

Career firmly established, he moved back to his home state the following year, first to Houston to be closer to his family, then to Austin in 2011 with his girlfriend. Here he found an exciting scene and plenty of top-flight players. Haslanger, Owens, Young, and Brannen Temple made up his first core collaborators on the local scene. From the state capital, he also rejoined the Ellington Orchestra as lead trombonist two years after landing here, traveling Europe, Israel, and Japan regularly – his last touring before COVID shutdown.

Hayward also founded a residency with bassist Chris Jones at the Japanese restaurant Takara in Cedar Park and recorded the swinging 2018 album Way Back Home, the trombonist's first album as a co-leader.

"I said, 'Man, it'd be great to tour Japan again,'" he recalls. "[Chris] said, 'Well, I've got family there. Maybe we could work that out.' Next thing you know we're making this record with Gene Centeno, a wonderful saxophonist, Damian Garcia, who's one of the great ones here, and Tom Brechtlein on drums."

No further recordings on the horizon, Hayward continues performing regularly.

Back in the Northeast, Hayward taught at New York University, the New England Conservatory, and New York's New School of Jazz and Contemporary Music. Michigan State's renowned jazz program also counted him an educator. Not surprisingly, he joined UT's Butler School of Music for three years upon moving to Austin.

After that, he became an adjunct professor at the University of North Texas, and currently teaches at Austin's nonprofit New School of Music. While Hayward won't land on a tenured track anytime soon ("I've never really fit in that mold of university politics"), he continues teaching clinics and putting in live residencies, including an upcoming pair in April in Houston and Plano. He accepts private students and remains an advocate of online music teaching, giving Skype and Zoom lessons since 2005.

"Andre is a big reason why I felt the confidence to make records," declares Austin trombonist Altin Sencalar, who studied with Hayward at UT for two years and is prepping his third album Reconnected for release in August. "I probably talk to him twice a week, and he probably comes over twice a month. I still study with him. He's definitely a mentor in my life."

Local singer/pianist Chloe Youtsey, who first met Hayward in 2017 at the Elephant Room and whose debut EP Memoir came out last October, also benefited from his experience.

"He's just one of those powerful presences," she says. "The best way you learn is by playing, and he isn't unwilling to bring people of all experience levels with him to a bandstand. By virtue of getting to play next to him, you're learning personability within the music. He has a natural dynamic that makes him an instructor as much as a co-player when you're with him."

"He's big on spreading his knowledge to youngsters and professionals alike," says Haslanger. "He has no airs about him even though he's highly accomplished. He's a very down to earth guy who's more than willing to play with high school kids as well as with Chick Corea."

Passing on musical insight remains crucial to Hayward. He's quick to mention his own teachers, including his cousin Frank Lacy, who played with Art Blakey, Houston teachers Steve Baxter and Carl Adams, TSU professor Marvin Sparks, and the mighty Slide Hampton, with whom Hayward studied privately in New York.

"I always felt it was an obligation for me to give back," acknowledges Hayward, who calls jazz a spiritual journey. "It's a means of healing. This whole mission – why we practice and why we get up in the morning excited – is so we can touch the lives of other people. Hopefully we're saying something that's logical and meaningful, and a person can walk away feeling better than when they came."