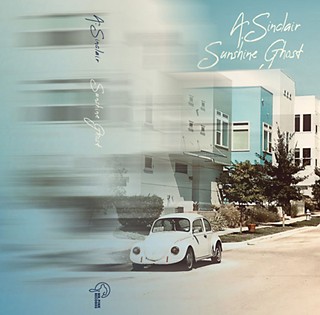 Quarantine didn't stop Aaron Sinclair from songwriting, but it did change his output. Three past albums from his namesake band rollick and writhe, many moving parts congealing into intricate but polished alternative rock. His latest release pares down this exuberance in favor of smooth-sailing Zen.

Such folksy positivity flooded alt-rock in the last decade or so; Fleet Foxes and Grizzly Bear come to mind here. Yet while Sunshine Ghost often reflects the first half of its title, Sinclair proves more interesting when he strays toward the dark. A foreboding, back-and-forth riff haunts "Hey How Are You," while the sinister "Tell Me, Tell Me, Tell Me" erupts from a skeletal bassline and bent-note grimace into a fuzz pedal chorus.

Later, tense centerpiece "There's a Man in My Garage" restores classic A. Sinclair freneticism and epitomizes its leader's penchant for lyrical detail. Pairing a smooth-sung refrain with a spoken call and response, the auteur recounts a run-in with a trespasser with disturbing specificity. "The first time he looked at me it was hatred and contempt/ His clothes were filthy but nice," the story goes, its quick, muted strums becoming scratchy leads. Like the brief numbers before it, the track ends without resolution, a curious flash of minute storytelling.

Contemplative closer "Twenty Second Hugs and Fall Down Fights" ends the homegrown Mr. Pink Records release with its best foot forward, a midtempo haze unafraid of ambiguity. "If you say you will, I will say I will too," Sinclair promises, misty guitar and dinging piano circling each other. "I'm not jealous, I'm just joking," he sings later. Right.

Despite the tease of a grand finale, a fadeout ends the daydream. The friendly ghost didn't need to say goodbye. He's gone searching for another sunny place. – Carys Anderson

The seventh circle of automated phone hell that is the Texas Workforce Commission hold line, with its cycling loop of tinny electric guitar, makes you long for the physical "unemployment line." In the last year, many had to endure listening to it for hours ... if not days. Composer and benefits applicant Justin Sherburn created an eight-part score based on the TWC claims experience with his chamber ensemble Montopolis. "Exceptionally High Call Volume" suspends time via pensive violin meditation, "Not Busy Signal" builds a warm, serene arrangement over the beep-beep of a jammed line, and "The Office Is Closed" evokes the disconnect between applicants and state employees on their day off. Cleverly, Montopolis set up an automated hotline previewing the work: 512/559-4739. – Kevin Curtin

The full return of live music dwells on the other side of vaccination critical mass, but Luck Presents and the Long Center give the local scene a shot in the arm with four limited-capacity, socially distanced shows on the lawn. The powerhouse lineups burst with a year's worth of pent up demand as two of Austin's premier songwriters, Patty Griffin and Carrie Rodriguez, lead off the series on Saturday, followed by Michigan breakout Billy Strings' Grammy-winning bluegrass on Sunday. The following weekend launches a constellation of rising stars behind Nikki Lane's raw and raucous country, Sir Woman's soulful send-up, and new Austinite Jade Bird's pop-inflected songwriting from the young UK native's upcoming, Dave Cobb-produced sophomore album. The Blind Boys of Alabama bring it all home Easter Sunday, sure to uplift with the promise of joining together in song sooner rather than later. – Doug Freeman

Townes Van Zandt's annual birthday salute snuck in one of the final shows before the Cactus Cafe shut its doors for the year last March, and although Austin's premier listening room remains COVID closed, they kept the tradition going online. Hosted by Butch Hancock from his home in West Texas and BettySoo in ATX, the 2.5-hour show that aired live earlier this month is preserved on the venue's Facebook page. The virtual format allowed for an expanded roster, from tribute regulars Beaver Nelson, Graham Weber, and Michael Fracasso to Chris Buhalis in Michigan, Hank Woji in Florida, and David Garza highlight "(Quicksilver Daydreams of) Maria" from Los Angeles. Shinyribber Kevin Russsell makes his TVZ birthday debut, and Amy Annelle stirs with "Buckskin Stallion Blues," but the real joy of the show remains the between-song banter and stories spooled by songwriters like Jimmie Dale Gilmore and Mickey White. – Doug Freeman

"We like piranhas, all we know is go!" This bar functions as an appropriate banner for all things Cameron Allen. His first single of 2021 packs enough heat to maintain the flame lit by the ascending North Austin rapper's previous singles. Babygrande Records' newest signee attacks instrumentals with a voracious appetite, stopping only to shout scratchy-throated ad-libs. "Valero" employs the gas station chain as a symbol for Dubbo's ability to hustle. Breakout single "Ben10" utilized a popular Cartoon Network character as a remarkable metaphor for transformation when under the influence of adult substances. "What you mean?/ I can remix the pot/ Just stir it a lot/ It's gonna come out fuego," declares the CEO of Double O Records. Right-hand man the Birdhouse (Zack Ingraham) conjures up a beat mixing samples with heavy 808s and snares. The sounds create a fresh backdrop for a hungry duo making noise with furious energy and ironclad synergy. – Derek Udensi

Deft mix of cool jazz, blue-eyed soul, and Brill Building pop, the debut EP from jazz-trained Austin singer-songwriter Chloe Youtsey seems given to understatement. Repeated spins of Memoir reveal subtle craftspersonship and a deep engagement with the material. Opener "1960" puts an infectious Latin rhythm from drummer Matt Carr under smart lyrics and a killer melody. Ballad "All a Memory" advises the singer's daughter, who contributes a baby scat solo alongside Sarah Milligan's sax. The devotional "You Are Enough" makes good use of jaunty block piano chords, and "(Mozart's) Black Coffee," its title paying tribute to her weekly residency at the self-same coffee shop, draws deep wells of emotion out of its metaphor. Tied together with Youtsey's husky singing and sensitive piano accompaniment, Memoir introduces a local singer and songwriter of exceptional craft and promise. – Michael Toland

In the presence of someone who values you, everything changes. Mariclaire Glaeser explores those vast feelings as Lady Heartwing on her second synth-pop solo release, wielding expansive electronic waves of tranquility. The former Shy Beast frontwoman's wispy vocals rival the lower melodies used in her previous project, and together they glow as bright as the moon. The new style fits her like stars in the sky, effortlessly captivating. Backing tracks accentuated with twinkling progressions and shimmering beats mix with inspiration from anime, St. Vincent, and Aladdin Sane, so the soloist's radiant crescendos and rhythms pop. Echoing stanzas dance delicately between each grooving chorus, so when the song sets, its light lingers and we're left to bask in its "Afterglow." – Alyssa Quiles

Abandoning the grounded percussion, misty synth play, and distant harmonies found on 2020's Great Satan Mass Appeal, Day Joy's Michael Serrin opts for lo-fi simplicity on "Jesus H." thanks to its iPhone recording in a shed. This isolated process feeds the pensive solitude baked into the folk lament. Backed by unadorned acoustic strums, Serrin's unkempt wail reaches a settled assurance in the face of uncertainty: "One blink of an eye and your son's sailing into mine." Whether through clarity, exhaustion, or God, varied repetition reinforces his revelation. Unapologetic, resounding embraces sound best in a shed anyway. – Laiken Neumann

Austin's self-proclaimed premier hip-hop artist keeps his yearlong hot streak ablaze with "Activated." The Teeta sounds rejuvenated throughout multiple COVID-19 pandemic releases, and his latest single sees a return to his braggart ways. The Seventh Seal, a stellar collaborative mixtape dropped last year alongside Dallas rapper Willo, featured a welcome change of pace due to its reflective lyricism. Producer Mogonye Got the Juice whips up vibrant melodies on production, while the founder of "pretty boy trap" finds several ways to unabashedly show off. "That's my little bae so she flexin' like me," gloats the 29-year-old East Austin MC. The 2020-21 Austin Music Awards Hip-Hop/Rap Artist of the Year runner-up employs his signature rapid, whispery flow across the sub-two-minute track containing quotables such as, "I'm famous, pretty, and Black/ I just played your new shit, I decided it's wack/ I just played my new shit, I decided it's crack." – Derek Udensi

Fresh off winning this year's Austin Music Award for Best Hip-Hop/Rap Artist of the Year, their fourth AMA in the last five years, potent hip-hop duo Magna Carda previews a full-length project scheduled for sometime this year. "Propaganda" sees Megz Kelli run rampant over stirring co-production from tag-team partner Dougie Do and budding No I.D. signee Malik. The delightful track fuses an ominous yet inviting melody to the odd tap of keys before giving way to a riveting guitar solo. Black-and-white cover art with the words "Justice 4 Black Lives" continues important social justice advocacy established last year by a tandem always game to use its platform for change. "They can feel it when I write/ I ain't rich inside a bank, but I'm rich inside a mic," offers Kelli about her proficient rhyming. On this track, she gloriously struts for nearly three minutes. – Derek Udensi