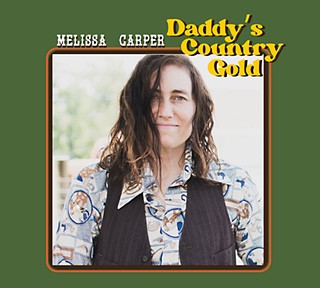 Melissa "Daddy" Carper's six-year stint in Austin last decade produced the formidable Carper Family, a string trio alongside Beth Chrisman and Jenn Miori. Their combo of Western swing and jazz, cut with Appalachian grass and folk, captured the jubilant spirit of old Austin's beloved Uncle Walt's Band. Sadly, the band laid down only one LP before Carper packed out to Arkansas and eventually Nashville.

Last summer brought her back around, though – taking root on an organic farm in Bastrop and planting her best album yet. Half of the dozen tracks on Daddy's Country Gold rework Carper's older material from numerous projects, taking advantage of an ace Nashville band assembled by producer Dennis Crouch of the Time Jumpers. He milks the anachronistic pull of Carper's vocals – a nasal clip and twang throwing back to Kitty Wells, Patsy Montana, and Hazel Dickens – with a jazzy Fifties country sound Daddy always flirted with but never realized as fully as she does here. A patina of LP hiss even accentuates the feel.

Opener "Makin' Memories" playfully shuffles a sobriety send-up into the swoon of "I Almost Forgot About You," before Chris Scruggs' steel guitar and Billy Contreras' fiddle cut country on "Back When." Like-vocaled hillbilly twanger Sierra Ferrell accents on harmonies, as does former Austinite Brennen Leigh, but Carper's distinct whine brands the songs fresh.

Carper Family favorite "Old Fashioned Gal" receives a Western swing rejuvenation, as does weeping ode "My Old Chevy Van." Likewise, "Arkansas Hills" chugs hard in reworking the lead track from 2020 Buffalo Gals Band debut Where the Heart Wants to Go, Carper's project with partner Rebecca Patek. "Would You Like to Get Some Goats?" harvests a country anthem complete with bleating backing, and Ranger Doug joins in to duet on "Many Moons Ago."

Through two previous solo albums and three side bands, Melissa Carper's worked a number of styles to find the fit for her voice, and it finally comes together spectacularly with Daddy's Country Gold. – Doug Freeman

Never a choirboy, this month's Songwriter of the Year at the Austin Music Awards opens the hymnal on a surprise collection of praise songs. David Ramirez's 30-minute service consecrates life through liturgical material, reinterpreted as soaring compositions where his contemplative voice falls over acoustic guitar, piano, and Simon Page's effected pedal steel. The ancient language of Backslider opener "Be Thou My Vision," a text dating back 10 centuries, strives for oneness with God, while modern church staple "How Deep the Father's Love for Us" reflects on sacrifice and sin. God songs equal love songs, so all comers welcome.  – Kevin Curtin

Megan Lacy's effortlessly clear vocals backbone her debut EP, with Justin Douglas at King Electric keeping the arrangements sparse and the songwriter the central focus. Salvation plays intimately, Lacy both sharp and soothing as she unfolds searching narratives of leaving the past behind and creating oneself. A song arc that begins with forgiveness, the collection's title track lets go of home as it travels into the wandering heart of "Don't Rest" and rearview reflection of "Carolina." The California native wrings all the doubts and discovery from establishing a new life, from the letting go of "No Better" to the closing determination of "Watch This." As a first offering, Salvation grants promise, talent, and an exceptional new voice.  – Doug Freeman

As robust, nylon-strung guitars swell and accordions unfurl, "Crazy Border Madness" spreads south of the border into ranchera as the stringed instrumentation dances to German polka and waltz. Unlike the traditional stories of Mexican love and pride, the song morphs into one of sadness wrought by the U.S. immigration crisis: "What kind of justice sends a child back to countries filled with danger." Yet while Borderland speaks to political issues, it transcends the moment by opting for plainspoken and compassionate storytelling over social commentary. The local's candid lyricism breathes life and cuts to the bone of humanity as on the title song, when she sings, "On the borderland today, where the people all are gathering with their families and their hopes without much but just a prayer." Like Leti Garza's previous album El Unico Para Mi (2017), the Houston native's EP still references a global suite of Brazilian samba and South American cumbia and merengue. Where Para Mi exercised a vocal playfulness and range, Borderland measures its author's depth of emotion as her voice transforms from tender croons like a swaying candle wick on "La Esperanza" and heartfelt, imploring intonation of "Te Invito" to the soaring resonance in "Derecho De Nacimiento." – Alejandra Ramirez

"If I'm so healthy, then why does it feel like I'm dying?" So wonders Emily Whetstone on her latest single, a sprightly soundtrack to psychological torment. While December's folk ballad "Hug" yearned for pre-pandemic affection, its fuzz-pop follow-up fends off a barrage of knotty questions. "I wanna know what happened to Connie Converse/ Why they have people locked up for weed?" sings the guitarist as soft reverb explodes into buzz saw power chords. Disappearing songwriters and mass incarceration aside, the track's karaoke chorus ultimately chronicles grief: "They're driving you down the road in a hearse/ While I'm stuck 1,180 miles away." Keyboards from producer Walker Lukens soften Katelynn Garza's chugging bass, and dynamic harmonies liven the frontwoman's full-throated warble, offering the band's most fully formed release yet. They've done indie rock and country twang, but macabre pop suits this Austin fourpiece. – Carys Anderson

Betty Benedeadly Returns From the Mesa

Spurred by the malaise of city life during the poisoned well of 2020, Austin axe slinger Betty Benedeadly hopped in a van and departed west to Taos, N.M., with no plans other than escape. Inspired by desert landscapes and a renewed closeness to corporeal nature, the Sheverb co-founder forges From the Mesa, a 12-minute debut instrumental EP in three acts. Influences lasso spaghetti Western maestro Morricone, with a flare of regional impact from the Southwestern Gothic sprawl of Albuquerque's Handsome Family. Benedeadly works repetition to her favor, foot-stomping rhythmic backgrounds while meandering twangs trot at their own speed and center the release with a determined midtempo gait. Limited-run CD available from Desert Records.  – Greg Stitt

Teenage East Austin menace Will Liardon cuts a striking image landing somewhere between Atlanta trap star 21 Savage's matter-of-fact tone and the ghoulish exuberance of horror film character Chucky. His first release of 2021, Locked In fills in more of its leading man's story. The rapper/producer's pinpoint beat selection mixes booming and mellow backdrops where his preceding tapes contained one or the other as soundscapes ranged from rambunctious trap to soul samples. Opposing forces receive heaps of admonishments throughout the 13-song tape, but the burgeoning MC remains most incisive when he chips into his exterior. "Seen my first body at 15 and lost my heart in the streets," he reflects on "Paranoid." His previous full-length revealed he completed his first "lick" at the age of 14 and even now Wiardon is still just 18. "I'm on house arrest, but I'm still running up bands," he boasts on "Money Back," for which there's even pictures of the ankle monitor to validate his claims. There's little known about this proud 78702 native, yet his coping for pain – rap – presents a discography of polarizing truths on the grow with sonically impressive evolution.  – Derek Udensi

New York native Jahmale Johnson taps the Big Apple essence with a new release titled for late Wu-Tang Clan member Ol' Dirty Bastard. Now based in Austin, the MC links with Bronx producer Yadnus for a song previously utilized for a Thrasher Magazine skateboarding comp. "ODB" showcases Norman Base's ability to dish out potent bars over a gritty beat reminiscent of 1990s NYC rap. The matching visualizer flashes scenes from 1975 live action/animated satire crime film Coonskin. Opening couplet, "So much rage that it's hard to speak/ So I stay with the Booker T on me like it's Harlem Heat" establishes an aggressive attitude while carrying on the song's East Coast aura (Booker T hails from Houston, but Coonskin is set in Harlem). Rhymes turn enjoyably comical when bragging about his significant other dancing to TikTok and taking aim at adversaries. "ODB" serves as the lead single for an upcoming EP between Norman Base and Yadnus.  – Derek Udensi

"100% of the proceeds from these records go to the Eastside Kings Foundation," announces Dialtone Records majordomo Eddie Stout of a clutch of new 45rpm singles. A 501(c)(3) nonprofit named for the loose session crew that plays on virtually every Dialtone release, the EKF mission remains simple: "To preserve and promote the cultural heritage of African American blues, jazz, and gospel music." Lately, it's provided funds curtailed by the pandemic-paused live circuit to needy regional musicians.

The Moeller Brothers, T-birds/Barfield guitarist Johnny (whose tone lacerates like broken glass) and Jason ("the best shuffle drummer in the world" in Stout's parlance) rock hard enough for Third Man Records on "20% Alcohol" and "Need Somebody," while Eve (Monsees) & (Mike) Buck slash garage blues only slightly more refined than Hound Dog Taylor on "Driftin" and "Where You Been."

Stout says sessions occurred in a large disused aircraft hanger, allowing for social distancing. All play like vintage Chess or Sun singles: the ambiance of a room being recorded as a live band plays, which is how the good Lord intended blues sides to sound.  – Tim Stegall