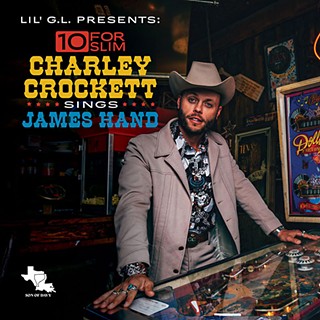 Charley Crockett paints James "Slim" Hand as he was: equal parts elusive Western legend and down-to-earth working-class man. "If you spoke his name above a whisper/ He'd just disappear into the hot Texas night," Crockett laments on the introductory track to his first of two planned albums in 2021, a tribute to the late Texas country icon. While Crockett previously played bluesman, honky-tonk caller, and folk singer-songwriter, 2020's Welcome to Hard Times asserted him as a shapeshifter – always bending to the sounds of human experience.

On 10 for Slim, that versatility enlightens his grief.

Crockett waltzes through compositions by "the real deal," as Willie Nelson described Hand, not only with the confidence of an artist who released nine albums in the last six years, but with the intimacy of their friendship seeping through his rounded syllables. The San Benito native abandons his once biting, lisped voice for a smoother, South Texas-meets-New Orleans drawl. It's still no quivering Slim croak, but the Austinite's unique vocals color the pared-down, selective instrumentation.

Steeped in an everyman's familiarity, Hand's faithful writing ensures he's always lingering in the foreground ("In the Corner," "Over There That's Frank"). Even so, Crockett spins the music into something more subtle. "So Did I" sidesteps bouncy strums for elongated pedal steel haze; deep, intermittent bass; and a slowed tempo. Wandering keys and light plucks on "Just a Heart" smooth out a once coarse track with a newfound solitude.

And when Crockett sings Hand, the melancholy rings a little louder.

Despite the interpreter's incomparable croon and sonic sprinkles, he stays true to Hand's originals ("Midnight Run," "Lesson in Depression"), a testament to the emotionally blue narratives their author built under the guise of easy grooves. A week before Hand died last June, he sent Crockett an unreleased song recorded on his phone. For one final time, album closer "Slim's Lament" – rife with fiddle and solemn desperation, e.g., "With each new tear/ The same old pain is here/ Oh death, you'll have so little left to claim" – emits its namesake's ethos: shameless vulnerability.

That doesn't mean that Slim will disappear into the hot Texas night forever. 10 for Slim delivers Crockett's assurance that James Hand doesn't fade into an oral and audio myth. He was real. – Laiken Neumann

Following the subterranean "Harpoon," gifted multihyphenate Kydd Jones comes up for air on dry land for the concurrently organic and polymerized "James Baldwin," featuring Bomani Ray Barton adding atmospheric guitar. Solemn and sobering, Jones channels the author and so many Black men who've had to steel themselves when forced to reckon with the fact that help would never arrive. Artist and engineer, Barton was brutalized by Austin police as he protested the deaths of unarmed Black people on May 30, 2020, struck with a "less than lethal" round to the face that required significant medical assistance. The track also arrived with a short-run T-shirt line designed in collaboration with artist Will Bryant, benefiting the local Eastside charity Austin Learning Academy. – Kahron Spearman

Returning for year 21 after narrowly eking by amid last year's shutdown, Anne Heller's burgeoning experimental and then some festival remains a mid-March staple for those seeking a pastiche of live music experience. Roughly 35 performances spread over three days and as many venues, YXSB launches night one at Sahara Lounge, 7pm, headlined by cumbia locals Onda Cosmica, with support from Pleb, Aurora Plastics Company, and six others. Day two kick-starts at noon in a Rosedale backyard and closes at 10:15pm with Dallas industrial synthesists ManifestiV, support from Caribbean-styled Executive Steel Band, and additional appearances by Abigail und Hansel, Heavy Stars, plus 10 more. Day three brings the event back indoors at Come & Take It Live, where NYC's U.S. Americans close out a nearly nine-hour day after sets from Cyclop Toad, Nøkken & the Grim, Aunt's Analog, Christopher Petkus, and eight others. The limited-capacity, mask-required event runs $5 per day, with the whole shindig also livestreamed across TBA platforms. See YXSB Facebook for more details and final artist announcements. – Greg Stitt

Lizard? Land dragon? Prehistoric Japanese monster? Fish head, of course, but it stares down the return of the Gary with an offhand intensity befitting both the EP's six sulfuric cuts and its 12-inch-loving album art on Windsor Park imprint Act Your Age Records. Dormant since 2014, the Austin hydroelectric trio flips on a hard, flat, Eighties post-punk sound, a tangle and tumble of singer/bassist Dave Norwood, axeman Trey Pool, and new beater Anthony Castaneda on opener "Ordinary People." The frontman's four strings pluck the work of six, giving the overall clang a Southwestern humidity, or perhaps Midwestern warmth, against any UK frigidity, a storm front always building toward an extreme weather warning ("Fallow Fields"). Norwood's deep, halting voice sounds like no less than Bill Callahan on the thick, chugging, balladic "Info," his extemporaneous, extended haiku stream of lyricism matching the band's musical triangulation. A stark beachfront video of the song, intercut with the band fading into the shadows, maybe gave up the vinyl art. Taut, crackling, bending and bent instrumental "Radical Prostate" outdoes its own title on the flipside, throbbing to life a red glow of anxiety and release – "Life itself," to quote Springsteen. Turns out to be setup for "The Season Consumed Me," a languorous possession of tempo and string'n'drums tsunami that extends this extended play into full-length satisfaction. – Raoul Hernandez

Polishing a batch of compositions from the past five years, Graham Wilkinson commences aptly enough, asking "How's It Going to End?" It's a question that lingers across the album, working down from the existential to find a balance in the celebration of simple moments despite the tentativeness of it all. The songwriter's gruff vocals spark a weary but uplifting joy, hearkening Bahamas' Afie Jurvanen in the earwormed melodies. "Aching Head" and "Lucky" offer affirmations – part prayer from the road and part search for meaning. Likewise, the title track calls home in a blast of guitar to the harmonica-bleeding boogie of "Which Way to Go." The closing couplet of "This Town" and "Balcony" beautifully caps a full-length torn between the struggle and epiphanies of art. The former faces off with the realities of Austin, leaning into an enduring chorus of "Here's to sorrow, here's to love, here's to rock & roll," while the finale calls for "one more night" in a soft, swelling piano and strings. – Doug Freeman

Teased as a five-song EP of the same name last April, Israel Nash gives Topaz a full-length rejuvenation. The LP now doubles the tracklist, echoing with Hill Country meditations crafted in Nash's Dripping Springs studio. Full and soaring from the outset, with "Dividing Lines" bursting frustration and hope akin to a Seventies anthem, the collection hooks at every turn, as on the tender high call of "Closer," aching like Neil Young crossed with Kurt Vile. While the wide-open arrangements roll like wind over the expanding vistas, this is an album to sink into, restorative and inviting. The lazy swirl of "Southern Coasts" and chill flow of "Canyonheart" pull against the slinky, dirty Southern soul riffs and horns of "Down in the Country" and pumping surge of "Indiana." The immaculately suave groove of "Stay" serves as centerpiece, while closer "Pressure" stonewalls with heavy defiance. Nash works best allowing his songs time to evolve, layering psychedelic touches as the tunes expand in deep breaths, and Topaz exhales with full power. – Doug Freeman

Jean-Claude Meama's latest full-length album, New Motive, feels like a warranted celebration of finding his way after battling various trials and tribulations. He says that as recently as last year, "he was broke as [expletive]." Introspective singles such as "Pray to God" and the LP's title track blend into nine new songs mixing reflection and self-congratulation. Jay$ee's melodic sing-rap style remains prevalent on his first project since 2019, while receiving updates with the use of new flows, notably "Right Call" and "Foreal." Powerful opener "Hardway" juggles emotions. An admission to hustling during grade school ("I went through so much to get it/ I was selling weed in the hallway") precedes humble gratitude to God for making his self-proclaimed greatest invention. Most importantly, the Austin MC demonstrates versatility across the 12 worthy songs of New Motive. – Derek Udensi

Olson St. Clair, a free jazz quintet led by trombonist Michael St. Clair and drummer Jeffrey Olson (one of many local jazzers who've served time in White Denim), avoids cacophony on Western Free. Along with bassist Sam Pankey, saxophonist Dave Sayers, and synth player Wiley Greene, St. Clair and Olson follow an exploratory route on the five songs here, setting up frameworks that allow the musicians to dig into nooks and crannies. The horn players don't so much kick the melodies around as knead them like bread dough, pushing and pulling "Bodies in Motian" (a tribute to like-minded drum god Paul Motian) and "He Lurches Across the Room" out of shape without obscuring their essential nature. Olson keeps the rhythmic sands shifting with his elastic kit work, letting Pankey shoulder most of the responsibility of maintaining order. Whether waxing atmospheric as on "Motian" or buzzing and burbling as with "Entropy Peak," Greene acts as the wild card, contributing elements not usually found in jazz this unhampered. With just enough structure to be recognizable and a sonic blend that eschews noise for noise's sake, Western Free upholds the standards of free jazz in a most accessible manner. – Michael Toland

The Most Memorable Moments of Levitation’s Saturday and Sunday
Die Spitz, L7, and the Pinky Rings as Fembots