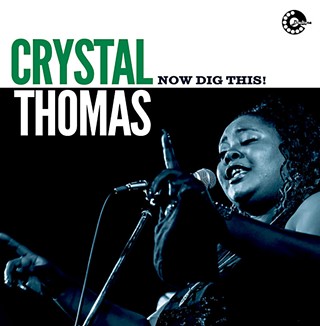 To, in fact, Now Dig This, you just might need to pop into Antone's Records to purchase the 180-gram vinyl. Platform? Yes, it's the store's front display bin.

In the olden days, a sort of chitlins (and grits) circuit of record stores carried releases by mom-and-pop labels such as Austin's Dialtone, documenting artists rooted deep in regional scenes where "authenticity" proved no more difficult than plugging in and playing. Louisianan out of Mansfield, Crystal Thomas grooves a modern day Southern soul circuit between Dallas and Shreveport, "but she tells me her real love is playing the blues," reveals the imprint's patriarch Eddie Stout. Now Dig This tunnels beneath all these signposts.

Cut in Dallas and produced by the Dialtone true heart (revisit Sept. 8, 2017, cover story "Eddie Stout Is a One-Man Historical Blues Society"), the album burrows into sessions of seasoned backing by cap city journeymen Jay and Johnny Moeller – both siblings past and present Fabulous Thunderbirds on drums and guitar, respectively – plus bassist to the stars Chuck Rainey (Fats Domino, Aretha Franklin), and a nearly session-stealing wringer. Thomas, meantime, never over emotes like so many lesser singers, laying and even lazing back in key spots, which lends all 10 tracks a sensuality. The opening cover of Toussaint McCall's "I'm a Fool for You Baby" eases into Now Dig This slowly, subtly.

Except for Dallas soulman Lucky Peterson, that is, dripping kerosene on the organ and throughout the full-length.

Peterson died of a brain hemorrhage on May 17, 2020, and Stout believes Now Dig This logs his final studio commitment. "I'm a Fool for You Baby" teams rhythm licks with tambourine hi-hat as Peterson's organ crisps the low-end while dueling with Moeller's stinging guitar. All the while, Thomas' broad, yet trebly blear owns the road. The label head's instrumental jam "Blues Funk" slurps up and down Peterson's keys into which the frontlady inserts a trombone solo!

On a straight, drain pipe blues like "I Don't Worry Myself," she doesn't need to peel paint since she's already slathered the barn in 12 shades of red. Brandishing Janis Joplin's "One Good Man," Thomas takes the song down rather than up, her position in the mix transporting her into the same room as the listener. Uptempo works too, because when "No Cure for the Blues" starts rolling downhill, get ... out ... the way.

Back-to-back soul stirrers "Take Yo' Praise" and "Ghost of Myself" illustrate an LP arc a Spotify playlist can't algorithm, but side two doubles down the stone blues. Johnny Moeller and Peterson groove a grand old time in Albert King visitation "Can't You See What You're Doing to Me," then save their best for last. "The Blues Ain't Nothing but Some Pain" siphons off nearly five minutes bordering on Nina Simone, with Thomas' broadband bleed and Peterson's empathic accompaniment brightening until their vocal trade-off on closer "Let's Go Get Stoned," sanger and pianer man getting juke joint bent for the ultimate mic drop.

I Am Bearwood: Born

Chris Brecht's main gig leading the Project ATX6 artists to festivals around the globe halted last year, so he focused on his own music. Following the charmed alt-folk debut LP of his band with partner Megan LaPrelle last year, the Eastern Leaves' Light of the Lantern, he teams here with hot-hand producer Jonas Wilson in I Am Bearwood on the Born EP, which allows him to explore more adventurous turns. "Hummingbird" commences with a wistful beauty floating in Brecht's distinctly sleepy, reedy vocals, while "Running Scared" twists with a dark edge. He's at his best lingering between weary and dreamy, as with the organ-lifted "I Love You Still" and marvelous Tweedy-eque piano build of closer "Kingdom Come."  – Doug Freeman

Gentlemen Rogues, "Do the Resurrection"

This Austin power-pop quartet's new 7-inch single on Denver indie Snappy Little Numbers snapped Little Steven Van Zandt to attention when the nationally syndicated radio host declared Gentlemen Rogues' "Do the Resurrection" as that week's "Coolest Song in the World." Seemingly about love during a zombie apocalypse, its lyric collides with the naggingly insistent hook, "I want you, but I don't want to/ I love you, now will you stop trying to kill me." Pummeling drums, guitars that simultaneously chime and crunch, and a three-part harmony six-string break do the rest. The video looks like The Walking Dead outtakes, featuring the band performing beneath a pair of abandoned overpasses – drummer Josh Power pounding out the beat on his thighs with his hands – inside a living room, and within a cramped rec room, complete with crates of records. It's a hilarious clip for an infectious 45.  – Tim Stegall

Lauren Riggins uses a single verse to prove she's got plenty of sauce. The Austin MC dropped Valentine-themed EP Lover's Lane last year but didn't follow it up til now. Employing R&B singer-songwriter Lakrea Clark on the hook of "In My Bag" to hate on a go-getter for accumulating money over love, she leaves little for imagination when detailing this unmitigated hustle: "I'm a dawg, yeah, check my pedigree/ Ain't no hoe from my city can fuck with me." The assertive nature of "In My Bag" represents a change of pace from the successfully sultry "Pull Up" of 2020. Riggins' new single is succinct, fast-paced, and a warning shot to any person still casting doubt on her pen.  – Derek Udensi

From taking a stab at vlogging on YouTube to rapping, Kenneth Jackson exudes swagger with every move. As Whookilledkenny (fka Kenny Gee), the Austin MC now based in Los Angeles ends a 13-month music drought by imploring potential investors in his stock to #PayTheFee. "Finna Charge" turns his frequently uttered catchphrase into a vindicated demand over a silky smooth flow and vibrant instrumental. "Eastside, them niggas love it/ Westside, them niggas love it/ Northside, posted with my cousin/ On the Southside, just sold a dozen," boasts the 23-year-old of his widespread influence. A live performance of "Finna Charge" showcases Kenny's stage presence despite being recorded on a rooftop. He matches the studio recording bar-for-bar, cadence-for-cadence, while backed by a deft band. With nearly 50,000 Spotify streams in less than three weeks, invoices may soon need filing.  – Derek Udensi

The truth is out there, but Wildfires won't try to convince you. Inspired by its own UFO encounters, "the least shoegaze band of all the shoegaze bands" returns from a four-year hiatus with this zippy full-length, where lightness reigns supreme over the genre's classic wall-of-sound intensity. Crisp melodies by Gabriel Baldwin and Johanna Heilman dance through reverb haze, and snappy rhythms from Chris Heckendorn and Aneil Naik keep a brisk pace. No time now for conspiracy crusades. Even the seven-minute instrumental centerpiece "It Stopped Over Us" manages to find comfort in the unknown, a faraway sample of one flying saucer spotting matched by an insistent airy guitar. Baldwin's nasally drawl lends the LP a human edge, and scratchy riffs in garage rock numbers "Cousins" and "Puppy Love" fill the space in which the band normally revels. Do Mulder and Scully know about these guys?  – Carys Anderson

"Tell me, if what makes you someone is something, then why can't I have mine?" ponders Dayglow's Sloan Struble over punchy beats and sharp guitar strides in "Something," the second single released ahead of his sophomore album, Harmony House. Following lead single "Close to You" taking cues from Eighties synth-pop, "Something" returns with a little more bite. Wrestling his patience, Struble meditates on finding something to feel whole after achieving success with 2018 debut Fuzzybrain. Here, the 21-year-old's syncopated vocals and whistling synths usher in playful dynamics. While his commitment to danceability was never in question, both singles foreshadow a step away from indie fuzz and a surrender to that bright Dayglow sheen.  – Laiken Neumann

Inspired by an endearing moment of sweetness caught on a cliff side, Sarah Dossey shares a tale of ethereal passion. A founder of Austin's Pop Union, the songwriter arranges a bouquet of classic electro grooves with New Age synthwave. Fourth single from her upcoming EP Animal, "Jump" proffers celestial harmonies enamored by charismatic synthesis. Unlike darker releases "Black Magic" and "Animal," the alt-pop queen wraps the lyrics of her latest single in warm tenderness but maintains her enrapturing vocalisations and melodies. Opening solo, flowing beats soon join the songwriter in a heavenly crescendo. As the couple in her story drift through their valley of ardor, tinkling keys float alongside them with chords fading into one another. Love is a daunting thing, and the track invites listeners to contemplate a single question. Are you ready to make that leap?  – Alyssa Quiles

The Mellows: Need You

With the ease of a Sunday morning, the Mellows' sophomore LP nestles into the listener's ears with shocking dexterity upon the opening notes. Rock & roll classicist of the "if it ain't broke, don't fix it" variety, frontman and silk-voiced songsmith Colton Turner resonates the Crickets, Everlys, Chet Atkins, and Ricky Nelson across the November platter's 12 tracks. Joined by brother Zane picking on lead, Yari Bolaños' upright bass and Jack Christy's kit round out the rhythm section and complete an airtight quartet. Compositions lean wistful ("That's How the Story Goes"), barroom romantic ("Yes I Do"), and archetypal garage ("Need Lovin' Baby"), Turner's croon imbuing love songs "Kiss and Make Up," "I Know I Don't Know," and the title track into Muscle Shoals time capsules. Released by Spain's Sleazy Records, get your copy locally from Antone's Records.  – Greg Stitt