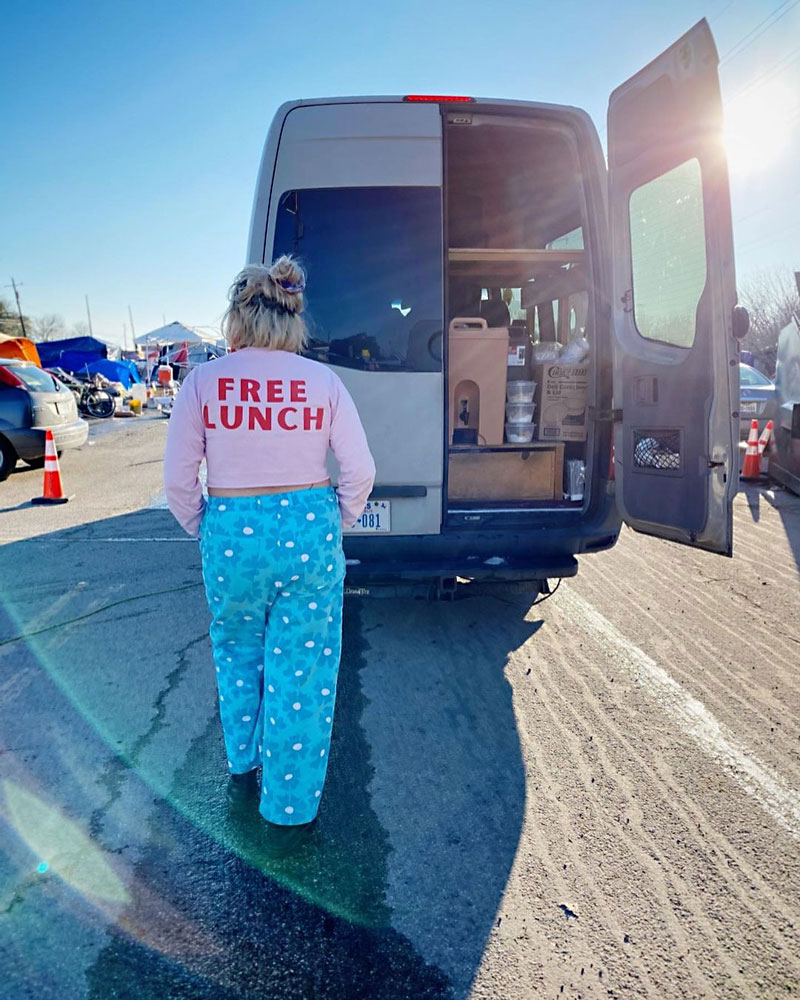 Like many homegrown tag teams, Carrie Fussell Bickley met Jazz Mills at South by Southwest. As leader of local psych-folk enthusiasts Calliope Musicals, the former played the show while the latter musician oversaw the hospitality area. Fussell Bickley says it's no surprise Mills now oversees a program providing nourishment to Austinites without homes. 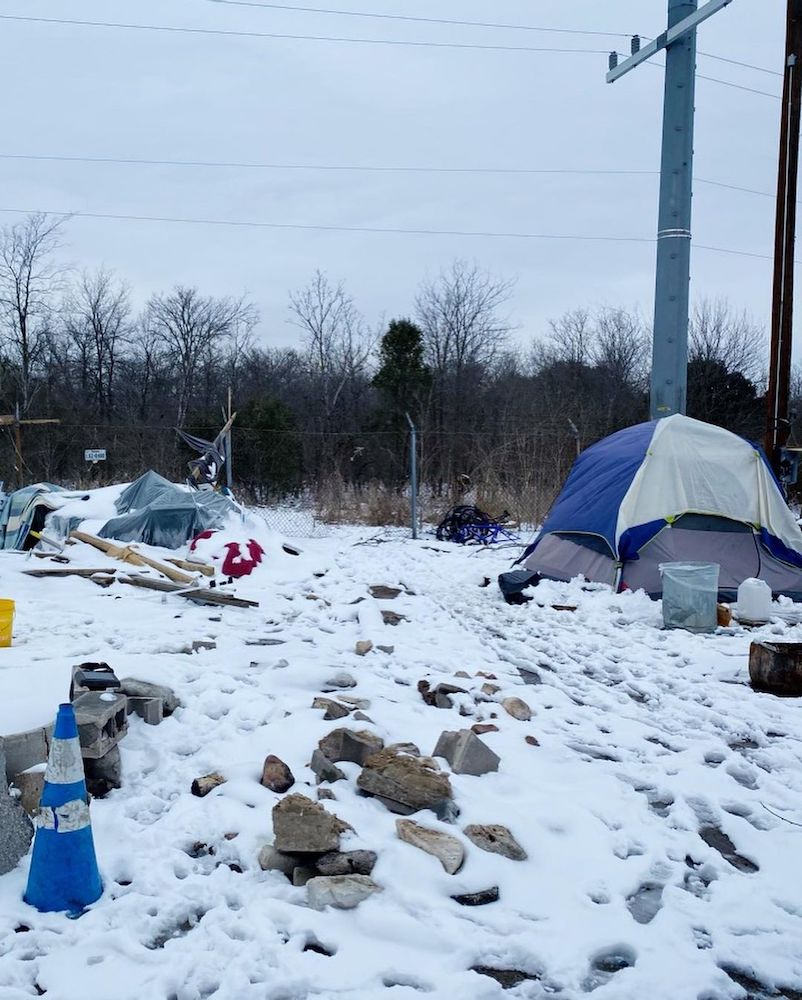 "I'm used to coordinating volunteers and backstage logistics at music festivals," says Mills. "So, instead of a festival VIP area, I need to rally resources to this homeless camp. It doesn't feel that different to me, but of course, I am wildly more passionate about it."

When last week's deep freeze halted deliveries from some larger aid organizations, the group increased dinner service from four times a week to daily, which Mills says they plan to maintain going forward. Unlike their typical setup, the crew mobilized out of the back of currently unused tour vans from Calliope Musicals and team member Caroline Rose. Alongside hot dinners, Free Lunch left reheatable eats at the Camp's office, which Fussell Bickley estimates totals some 2,000 meals over the week.

"We were driving around hollering like, 'Give us a wave, and we'll come to your tent,'" explains the frontwoman. "With all the snow, a lot of people couldn't even really leave their tents. It's inspiring to see the community rise, but it makes me so much more annoyed at our city and state infrastructure for not helping. Like, 'Why are you even here? Who are you saving?'"

Mills says a resident of Camp Esperanza died during the storm. A Feb. 21 memorial at Auditorium Shores honored the unknown number of unhoused lives lost during the calamitous cold. As state infrastructure collapsed, Austin's mutual aid and service organizations plastered their info across the internet.

"The sad thing is, people are always hungry," adds Fussell Bickley. "When it's freezing cold, it becomes more urgent, but we've been feeling this sense of urgency for a while. When it's 70 and sunny, it's just easier to forget about people in need."

On Instagram @f_r_e_e_lunch, the group found mentions from the Obama Foundation and actress Hilary Duff, who called them "a little bit more grassroots than the food banks." While accepting Venmo ( @FreeLunch-ATX) donations, Mills encourages monthly $10 donations as a "Lunch Monitor" at FreeLunchATX.com. Subscription includes a quarterly magazine designed by art director Hammer with updates.

For now, the team waits to see how the recent swell of support sustains before expanding.

"Our program isn't trying to solve homelessness in Austin – that's not realistic for us," explains Mills. "We just want to tackle food insecurity at Camp Esperanza, and then at another camp and another. What really matters is that when we tell people we're going to bring them food, we don't bail." 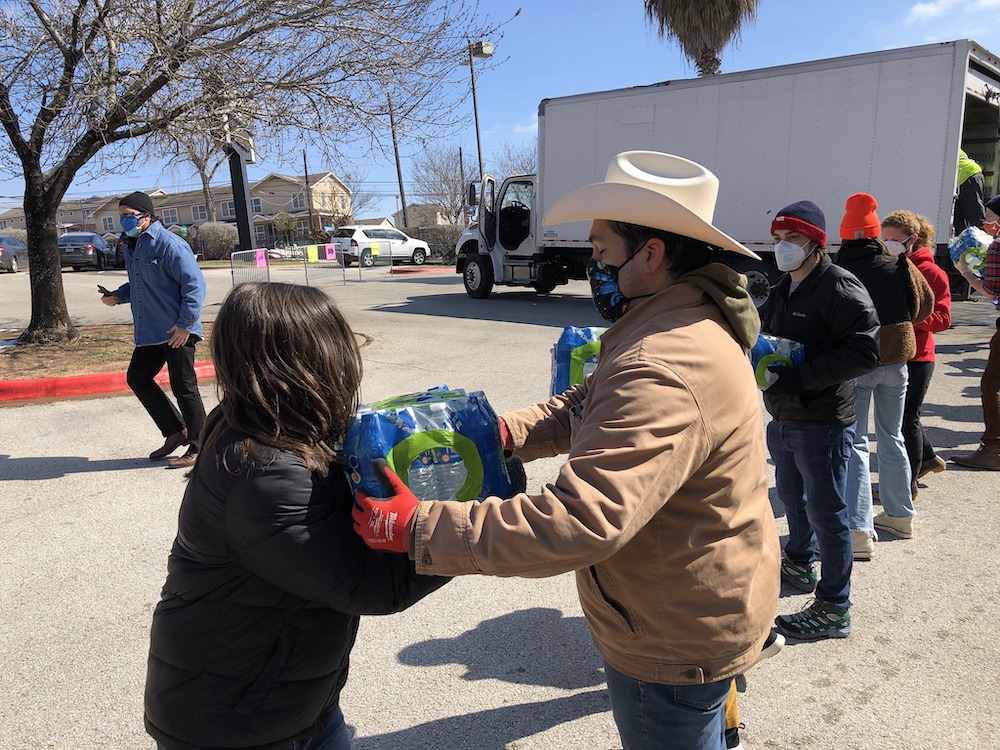 In less than a week, Diversity Awareness & Wellness in Action (DAWA) distributed $32,000 in direct assistance to Texans impacted by the storms, according to an update on Tuesday from founder Jonathan "Chaka" Mahone. The Music Commission chair crowd-sourced funds over Facebook Live, divvying $50 emergency grants via Google Form to those in need. Mahone and wife Ghislaine "Qi Dada" Jean, celebrating the release of new Riders Against the Storm album Flowers for the Living this week, also enlivened a Sims Elementary distribution center with music. DAWA accepts donations on their website, Venmo (@DawaHeals), or paypal.me/dawaheals. 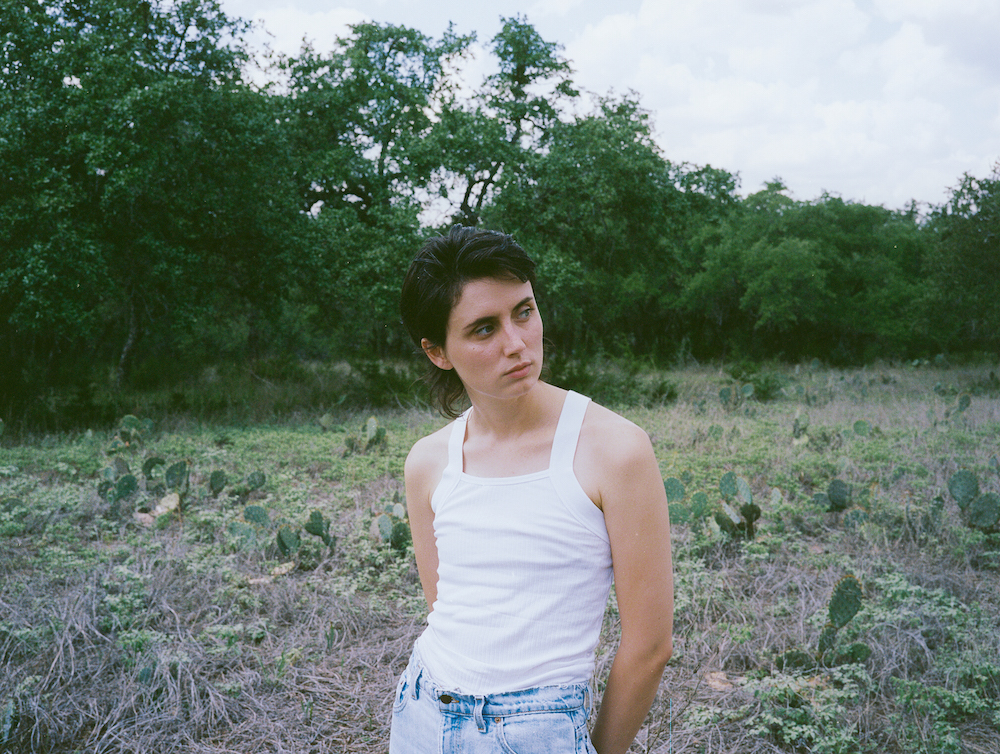 Driving through the South with her little dog, Katy Kirby is on a nostalgic journey. She's staying at her old house in Nashville, which she vacated after the pandemic sent her home to Texas last summer. She's en route from Alabama, where work on a childhood friend's album placed Kirby in the company of the same crew who produced her own debut album, Cool Dry Place, on the eve of its Feb. 19 release.

Her buddies picked up a kiddie fire truck cake in a nod to Kirby's bendy, frank folk number "Fireman." Alluding to her recent acclaim, the icing read, "Who did you have to kill to get in The New York Times?"

"I've wanted to put out an album forever, and now it just is," says the 25-year-old. "Suddenly I'm on the second paragraph of my hypothetical Wikipedia entry."

The celebratory crew included album producers Alberto Sewald and Logan Chung, who helped Kirby craft a warm indie rock ambience to match her sharp lyricism. In 2018, earlier versions of songs like "Juniper" debuted on cassette for Keeled Scales. Support encouraged the onetime Old Settler's Music Festival youth talent winner to re-record the material for a proper debut on the local imprint – highly regarded for new LPs from both Kirby and Sun June this month.

"I wasn't sure I actually wanted to make a life out of music," she admits. "I dropped out of Belmont's songwriting program after the first semester, and went for English because I figured I'd make a reasonably cool English teacher. Maybe early 2018, I decided, 'Okay, I'll try music for a year.'"

Mostly recorded in Nashville, Kirby's troupe of collaborators made a trek last fall to her parents' house outside of Austin in Spicewood to wrap up Cool Dry Place.

"Alberto was enchanted by how stereotypically Texan it was," she says. "We took him to my high school, Faith Academy [in Marble Falls], and he was like, 'Whoa, y'all like, made it out.'

For all its unexpected shapes and imaginative narratives, Cool Dry Place carries a cathartic, spiritual throughline. Songs like "Secret Language," which riffs Leonard Cohen's "Hallelujah," endeavor her own distancing from Christianity, which Kirby shared with her parents while living at home for the first time in years.

"I'd always told them, 'Oh yeah, I totally still believe, my expression of faith is just looser,'" says the artist. "But my mom and I were in a weirdly similar emotional place, and it was really nice to get to know her again and become a little bit more honest about my faith.

"Which is great, because I would have blown my cover in literally every single interview." 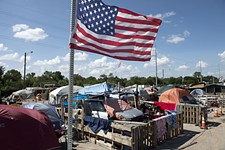 A DIY Approach to Helping the Unhoused Pays Off at Camp Esperanza
No funding? No resources? No problem. 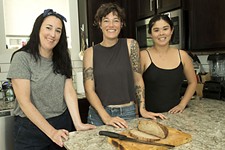 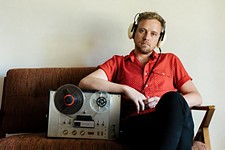 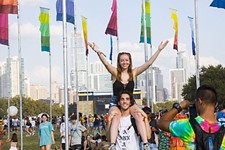