Faster Than Sound: Mobley vs. the Occident Supreme 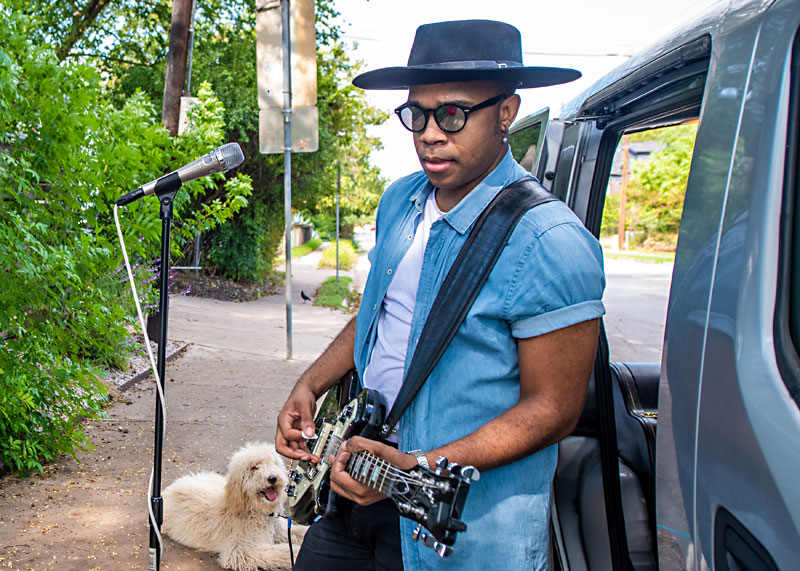 In a teaser trailer for Mobley's upcoming virtual tour, the local one-man band exists everywhere at once: Mobley peers up from tropical foliage, Mobley hits drums atop a Downtown hotel, Mobley strolls through an empty field, acoustic guitar strapped to his chest.

An alternative, intellectual reinterpretation of the action movie star, the indie-pop artist's take on John Wayne involves skinny jeans and a wide-brimmed hat. The ticketed online tour celebrate new conceptual EP Young & Dying in the Occident Supreme, out Feb. 19. Beyond his own cinematic making, Mobley's participation in Austin music over the past year felt equally omnipresent.

Back in July, his roundup of over 30 musical and visual artists for album/movie A Home Unfamiliar exemplified ingenious collaboration in the pandemic era. Soon after, hitmakers Foster the People endorsed his new EP with a post-disco rework of single "Nobody's Favourite." In September, he played outside fans' homes on a "curbside tour" of next single "James Crow" – a relentlessly catchy pop-rock track poised to jolt energy into any mainstream soundtrack. He's previously contributed songs to shows like True Blood and been commissioned to cover Bill Withers' "Lovely Day" by ESPN.

In "James Crow," a festival-ready chorus examines American systems of oppression. That kind of conceptual sandwiching is central to Mobley's artistic practice, where playful hooks and heavy symbolism collide.

"A lot of times, I'm trying to make an abstract and often prickly idea more accessible," says the singer. "My art takes complex ideas that are hard to talk about in a thousand words, and finds a way to talk about them in a hundred words. And hopefully, in the best case scenario, creates a jumping off point for a more fulsome discussion of the matter."

"The Occident" is formalized by Merriam-Webster as "the western areas of the world, especially Europe and America." In the EP's reigning metaphor, the villainous "Occident Supreme" abbreviate real-life forces of Western cultural supremacy and capitalism. A fantastical spoken-word poem introduces the work, focused on the family separation crisis at the Southern border.


"Archetypes can be really useful for boiling an idea down to its essence," explains the songwriter. "Like [on the song] 'Lost Boys,' vampires are a metaphor for people who draw political power literally through the spilling of blood. The song also addressed the less-powerful foot soldiers for those forces, in particular ICE law enforcement."

Growing up around the world in a military family, he didn't see a lot of movies, going without a TV until age 16. Interested in animators like Looney Tunes wiz Chuck Jones, the artist studied film at the University of North Carolina, during which he also began performing as Mobley. His studies came in handy while directing Young & Dying's treasure trove of surreal, crime caper music videos before the onset of the pandemic.

Pushed back from a May 2020 release date, Young & Dying emerged during the electronically inclined soloist's vacation to Thailand in 2018. Intending to take time off from songwriting, he spotted a knockoff Telecaster through the window of a Bangkok music shop. Composed without his typical surrounding synths, Mobley calls the collection "a walk through the history of my favorite guitar music."

Beyond the sleek alternative fuzz of the EP's singles, funk and psychedelic influences garner an anti-gravity swoon in songs like "Mate." Back in his Austin home studio, Mobley recorded the song in just a few hours as a romantic surprise for his wife. Love songs aren't his typical format.

"Because I spend so much of my time thinking about the problems with the world and the way things could be – and in my view should be – I find it more natural to write about that stuff," he says. "But it was important to give this record a little oxygen by writing about what all of the fighting is for. Any kind of struggle for social justice is ultimately about love."

Mobley moved discussion over inequality in the local scene by helping form the Black Austin Musicians' Collective last year. A carefully measured speaker unafraid to go grand in vision, he's a great fit for the civic legwork, including placement on the Austin Music Commission's systemic racism-focused group. He partnered with the commission and data-gathering nonprofit Measure to launch the Austin Live Musicians Survey, which is open to replies from all local musicians online until Feb. 28.

He aims to holistically improve the experience of Austin's Black artists, reaching across industry opportunities and music venue practices.

"In an ideal world, we would like to see not only equity but also people making up for the past," he says. "But that ideal world isn't arriving as fast as we would like. In the interim, we're going to redirect as many resources as we can to those historically shut out of them."

With collective goals in the works, Mobley unveils a new video for "Mate" Friday with Young & Dying. Tickets for the virtual tour, kicking off Feb. 25, are available at www.mobleywho.com/tour. And beyond, a short film will later debut to accompany the EP.

"We made a video last weekend at the under-construction Austin FC stadium," says Mobley. "Looking at the footage, I'm like, 'What the heck am I going to do next? How am I going to keep upping the ante on this?' Making films just feels like part of my artistic life now."

Rupert Neve, pioneering audio engineer, died Feb. 12 due to pneumonia and heart failure unrelated to COVID-19. He was 94. Based in Wimberley for the past 27 years with wife Evelyn, the British-born, self-taught inventor worked on audio projects up until his death.

In 2001, former Chronicle writer Andy Langer asked the Grammy Award-winning designer what the biggest misconception was about him.

"That I'm dead or retired," he said. "I'm not retiring. I'm still working and designing as a consultant. I design innovative stuff and other people do the donkey work – the production. I'm in the wonderful position of being paid for my hobby." 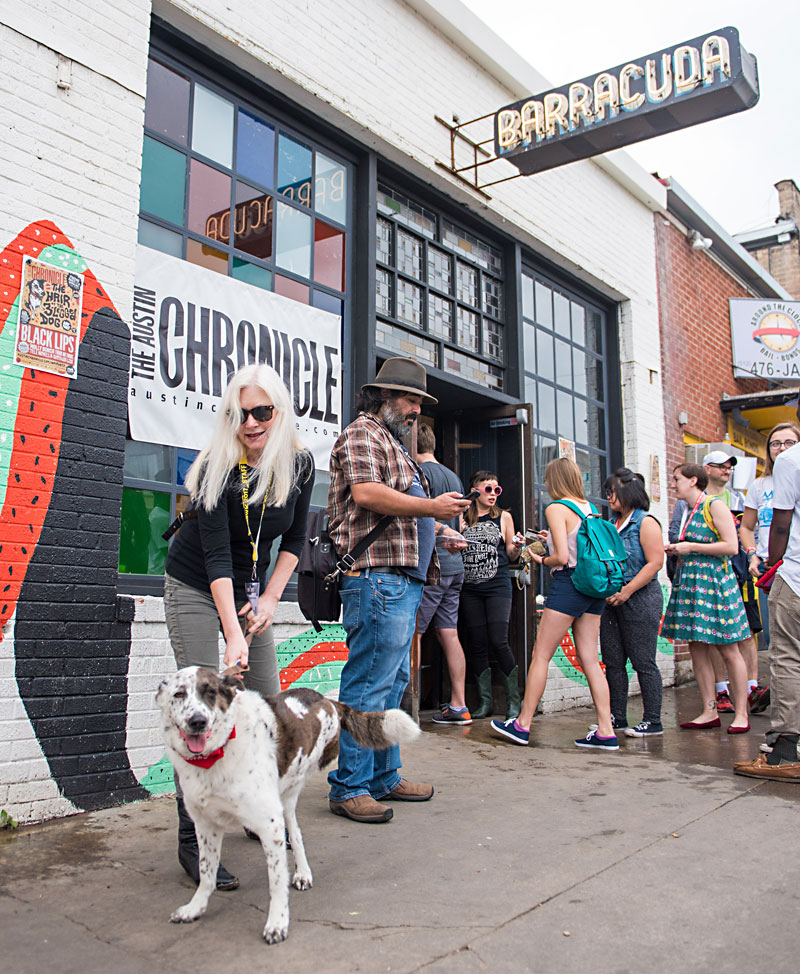 The line for The Austin Chronicle's Hair of the 3-Legged Dog Day Party at Barracuda in 2017. (Photo by David Brendan Hall)

Barracuda's former music hall at 611 E. Seventh will now house The Creek & the Cave comedy club. After operating in New York City for 14 years, the club announced plans to reopen locally April 1 with both an indoor and outdoor stage.