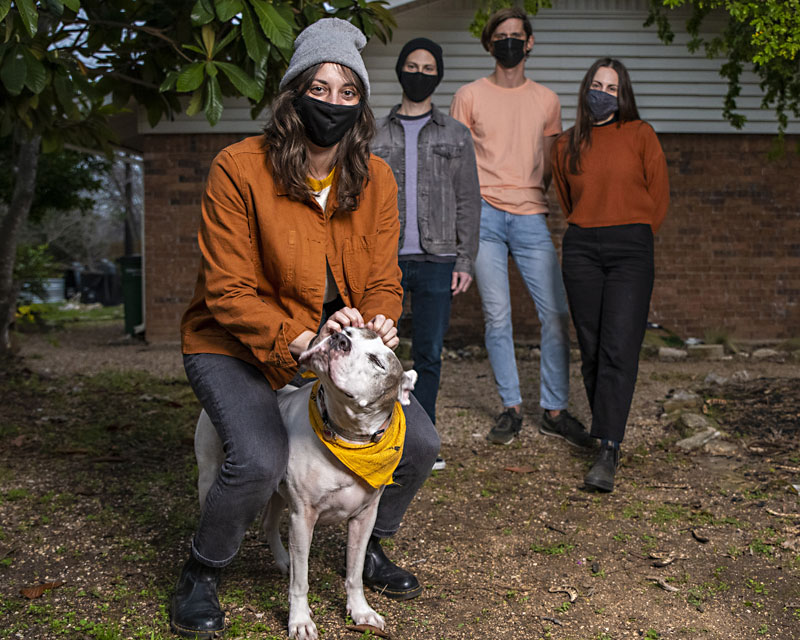 Sun June with Sam (in the bandanna), who stands in for Stephen Salisbury (Photo by David Brendan Hall)

"Living in a fantasy world sometimes is what we were doing," says the singer. "There's people that we really look up to and admire, so I can only imagine if you were seeing someone you really love – the way it would impact you. Especially if you were having a bad night.

"It's about letting the grief swallow you up and spit you out."

Pretend worlds brought together primary Sun June songwriters Colwell and Salisbury, who began dating following 2018 debut Years. The two got cast as crushing roommates for a friend's mumblecore movie, which never came out, but filming necessitated their first kiss. Written while living together, Somewhere delicately plunders the simultaneous vulnerability and joy of a new partnership with sweeping, country-influenced warmth at an ambling pace.

"Being in a relationship presents these moments where you're not really aware that you're processing – trying to understand one another, your past trauma, and all that," explains Colwell. "I write a lot about grief and losing people that were close to me at a young age, which is just inherently connected to that time in my life. You gotta mourn for different parts of yourself. 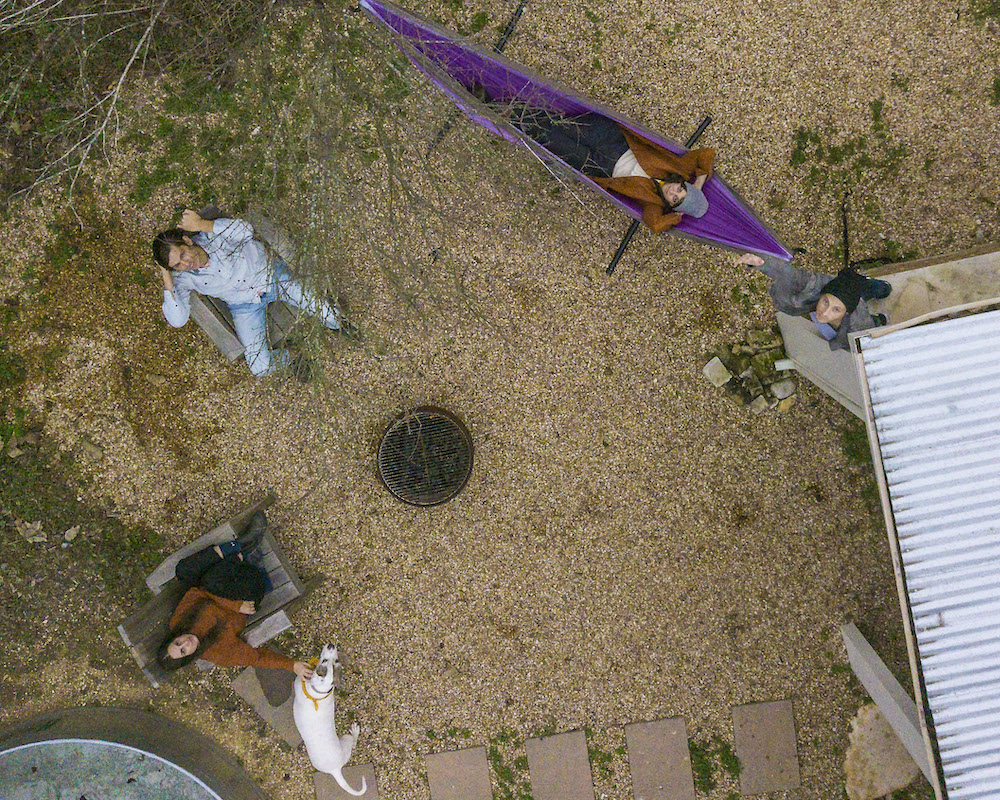 "At the same time, we're working together to make each other's dreams happen, so there's also a lot of love and happiness to get across. Figuring out that feeling is sometimes a surprise."

The two met working in the film industry, which attracted Colwell to Texas in 2012 for an internship at Austin Film Society. The native of New York's Hudson Valley says the city's musical prospects hid "way far in the back" of her mind. Child of divorce, she taught herself to play piano during weekends at her father's house and sang for bands throughout college.

In the editing suite for Terrence Malick film Song to Song, she and Salisbury, on guitar, began co-writing songs half-jokingly.

"Before, I would write songs on piano, but I would toss things away pretty quickly because I felt like they weren't anything," Colwell admits. "When I started writing with Stephen, he was like, 'Dude, what are you talking about? Just do it. You have to finish the song, call it a song, and make it real.'"

Colwell, who used to make self-deprecating remarks onstage about her guitar prowess, recorded on six strings for the first time for Somewhere, alongside her typical yearning piano lines. Elegant lead guitar by Bain coaxes just enough instrumentation throughout the album, eased on a bed of synth. Santiago Dietche of Daphne Tunes will join the band as second guitarist on upcoming live sessions, as Salisbury is currently pursuing graduate studies in microbiology in North Carolina.

Before he moved, the band wrapped a series of music videos demonstrating Colwell and Salisbury's keen ability to capture Central Texas environments on film. Like its lyrically longing scenes, "Singing" tracks overgrown drainage ditches and cement beams to nowhere under the eternal development of Highway 183. "Karen O" visits a Hill Country ranch overnight, and "Bad Girl" choreographs barren fields around Lockhart, where the band recorded with producer Danny Reisch.

"The landscape of everything around us offers so much, even though it feels so dry and bare-bones," says Colwell. "Space is the biggest force of nature. You can put anything in it."

To open the monthly meeting on Feb. 1, Austin Music Commission Chair Jonathan "Chaka" Mahone recited a poem to honor Black History Month. The new leader's "Fourth of No Lies" began, "If you think even for a split second that because I was born with melanin and you were not, that you are somehow entitled to rule over my breath, my comings and goings, my choice of love, my self-worth, my story, my freedom to be who I was chosen to be, I will correct it."

Sound disputes at Eastside dance studio Esquina Tango dominated debate, with 15 locals chiming in on the issue. Alongside online classes, the business built an outdoor stage and raised platforms last year to host distanced classes, but faced noise violations for outdoor music. Some residents of the surrounding neighborhood, including nearby Santa Rita Courts, complained of disruptive noise levels during daytime classes and nighttime events stretching as late as 4am.

Other supporters defended the 14-year-old nonprofit's value to the neighborhood and urged support of Esquina's efforts to adapt to COVID-19 with outdoor events – all of which are currently on hold. Brian Block, the city's entertainment services manager, explained why a permit allowing outdoor amplified sound is off the table for the business.

"City code does not allow us to issue a permit for outdoor music or sound that is within 100 feet of property that's zoned for residential uses," he said. "That's the situation that Esquina Tango is in."

Esquina Director Monica Caivano supports an online petition "[imploring] city leaders to assist in finding the temporary crisis-time mechanisms of flexibility" and says she's considering options like a silent disco and unamplified live music. She says any music will end before 10pm. The commission did not make a recommendation on the issue.

In other announcements, the Art in Public Places program, which contracts artists to install work throughout the city, is now open to musicians alongside visual artists. Deadline to apply for the "2021-2023 Pre-Qualified Artist Pool" extended to Feb. 22, 5pm, and won't open again for three years. And starting March 1 with D-Madness Project, commission meetings will include performances by local acts, paid out by the Music Office. 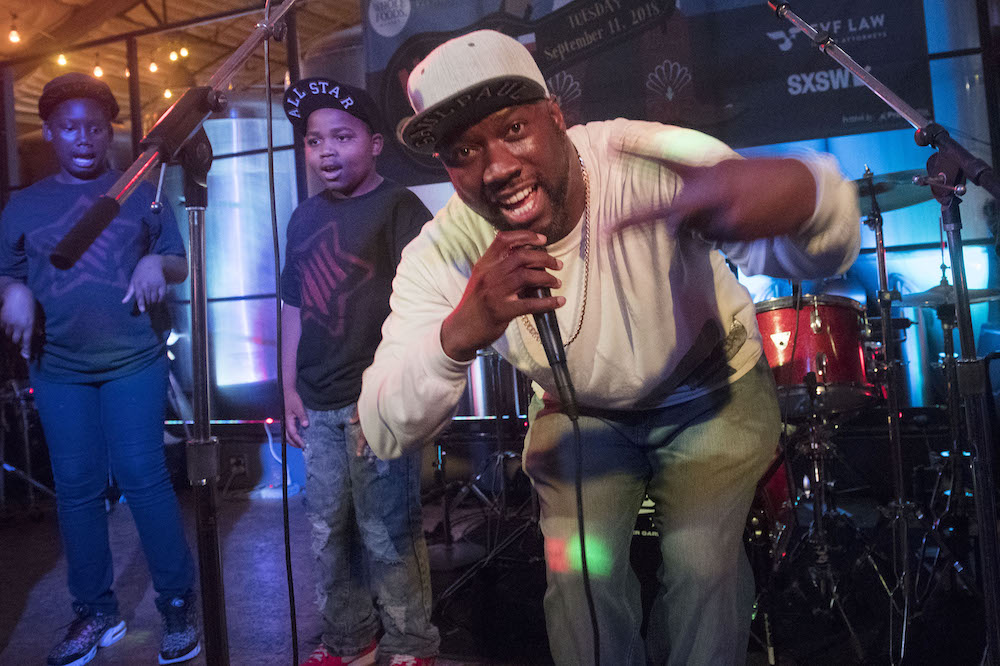 SaulPaul in 2018 (Photo by John Anderson)

Austin Music Foundation announced new leadership with Grammy-nominated SaulPaul as president of the board of directors. The humanitarian discovered the artist-assisting nonprofit at the beginning of his career in 2003 and says, "Because of it, I found success as an independent artist in the Live Music Capitol." He succeeds C3 Presents talent buyer Kristyn Ciani, who remains on the advisory board. Alejandro "Alex" Vallejo steps up as vice president.

Austin Live Musicians Survey, conducted online by the Austin Music Commission, opened this week to assess "the current state of the live music industry in Austin for the musicians working in it." Mobley, who helped launch the Black Austin Musicians' Collective last year, presented the survey to the commission in partnership with data-gathering local nonprofit Measure.