Life Is Terrible ... and Triumphant for Portrayal of Guilt "It's more of a frustration from seeing so much unjust things happen throughout humanity," he says of his band's fatalistic rage. "Obviously, for mental health's sake, it's not good to dwell in that negativity and, yeah, I should smile and go outside in the sun and be more positive, but it's hard when you see so many things that are just terrible."

Screamo, black metal, hardcore, power violence, punk, death metal, noise, ambient, and even a moment of funeral doom resound on the new album. Portrayal of Guilt integrates variant styles not as a patchwork, but a potent synthesis.

Portrayal of Guilt's sophomore full-length, the instrumentally scorching, emotionally intense We Are Always Alone, made its way onto tape as the plague waylaid America. Mid-tour, the Austin trio was forced to cancel all shows and haul it home. With society – and their practice space – locking down, the 30-year-old singer/guitarist, drummer James Beveridge, and bassist Alex Stanfield squeezed into a slot at Cacophony Recorders opened up by the pandemic.

King wrote much of the lyrical load in the studio, including the roaring "They Want Us All to Suffer," which now feels prophetic.

"There were a lot of questions being asked at that time that got answered after that," he says of that track. "People aren't given any money, we can't work, and we're all getting evicted. That's just one piece of it – it's about the system we live in. There are so many things that are so unfair and wrong being controlled by the government or corporations who want us to suffer."

No Gods, No Managers

Frustration can cause people to take control of their destiny.

When King moved to Austin in 2013, the San Antonio native brought Illustrations, a hardcore outfit he served as a prototypical frontman. The group put out four increasingly diverse releases, got a manager, and toured nationally with mathcore favorites Fall of Troy. By the time they released their epic 2017 swan song Acts of God, the band had become a drain on its founder.

"It all didn't go to plan," he sighs. "It blew up in our faces. And there were personal differences that led to me getting tired of it."

In 2017, a frustrated King began working on his own compositions, free from the context of his established band, and enlisted the preternaturally talented Beveridge, who joined a late-model lineup of Illustrations. The new unit's first three tracks, a set of blackened metallic punk redolent with morose tones and atypical musical structures, came to life as Portrayal of Guilt's debut single. When they hit the road, they drew an audience straightaway.

Even before the 7-inch sold out, musicians they all respected reached out to compliment the release. One communiqué arrived from Matt Michel of cult screamo act Majority Rule, King's all-time favorite band, who invited the locals to open their reunion tour. Michel then produced Portrayal of Guilt's breakout full-length Let Pain Be Your Guide, which catapulted them to 2018 rookie-of-the-year in heavy music circles and prompted performances around America and Europe – twice.

Finding himself as a vocalist on the debut, King employed a higher pitched black metal scream that's uniquely forceful and contoured, emotional yet evil. The successful album cycle and the ensuing spate of singles and splits confirmed the bandleader's efficacy at self-managing his own art.

"I'm going with any idea I have, doing literally whatever comes to mind," he says. "And it's been fun."

When spinning We Are Always Alone, expect to get tongue tied listing all of the genres it touches. Screamo, black metal, hardcore, power violence, punk, death metal, noise, ambient, and even a moment of funeral doom resound on the new album. Portrayal of Guilt integrates variant styles not as a patchwork, but a potent synthesis.

"When people ask me what I think we are genrewise, I just say punk," explains King. "To me, punk is just complete freedom. With what we're doing, there are no boundaries. Who's to say we're not going to release a song that sounds like Lady Gaga?"

Meanwhile, if there's a thematic doctrine to Portrayal of Guilt's latest, it's the three E's: extreme, evil, and emotive. The latter's comparatively subtle, but King decries humanity with palpable passion. As such, We Are Always Alone connects more dramatically than Let Pain Be Your Guide.

Credit also the soundscapes bookending each track. Crafted by Los Angeles harsh noise-ist Mack Chami, the atmospheric interludes imbue suspenseful stillness between the band's two-to-three-minute blasts. Those ambient breaths factored significantly into a recent collaboration with director Craig Murray, where "It's Already Over" and "Masochistic Oath" soundtracked a superb horror short about a woman in a scrapyard who tortures stranded motorists.

King wants Portrayal of Guilt's albums to feel scorelike, but it's equally important they remain – within their evil sensibility – digestible. That idea resonates on We Are Always Alone. "My Immolation" is informed by Interpol, one of King's youthful favorites, and the belief that heavy, extreme music can be approachable acts as a lodestar for the trio.

"The big vision is to do what we do and have it be as accessible as any pop artist," reveals King. "Maybe it'll help people realize it isn't scary to cover, that there's no age range, and that it's for anybody and everybody. It's hard to do that with any heavy music, especially us being outside the box, but we're trying to figure that out while creating music we enjoy." 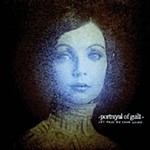 Portrayal of Guilt
Let Pain Be Your Guide (Record Review)