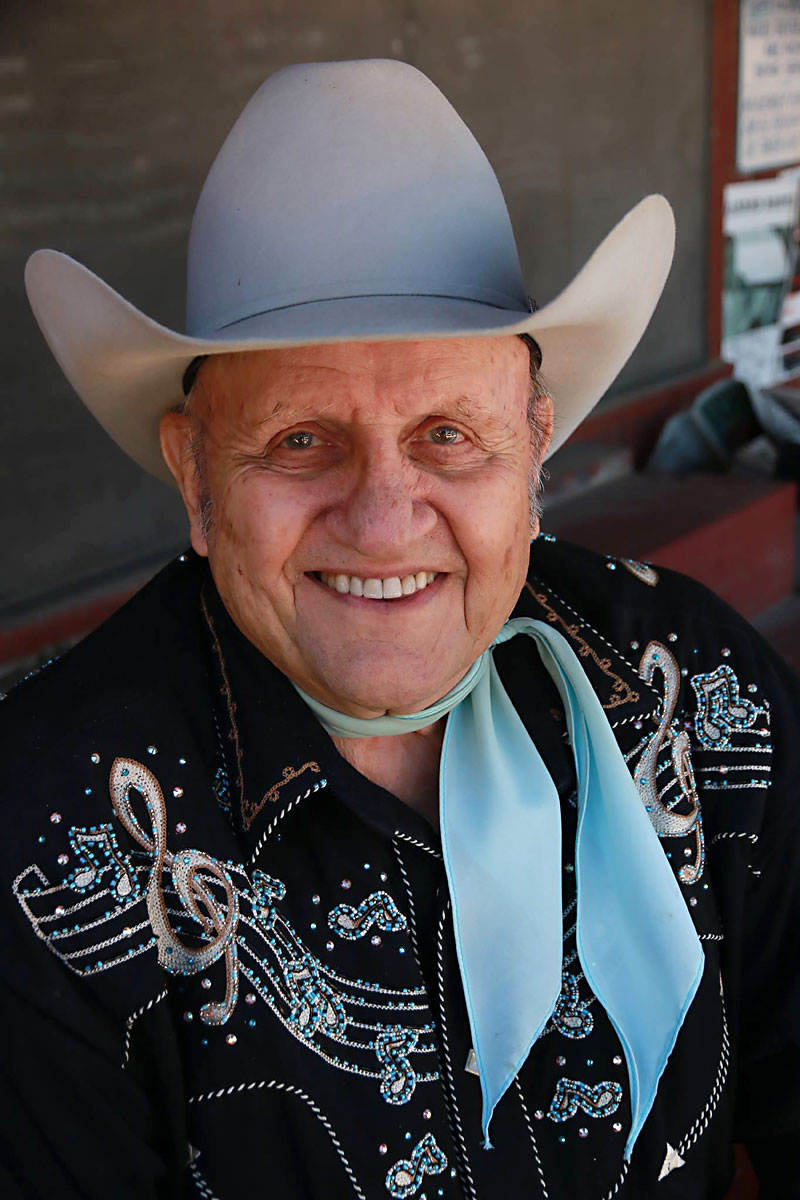 The institution now lives through the loss of its figurehead.

White died last Sunday, Jan. 24, due to congestive heart failure. The unwavering supporter of country music locally, nationally, and internationally was 81. According to daughter and venue general manager Ginny White-Peacock, the honky-tonk icon was diagnosed with congestive heart failure 20 years ago, and had been in and out of the hospital with complications after having a new defibrillator put in two months ago.

He passed at home with his family.

"My dad used to always say, 'I wanted to build a place like no other, where people could come and listen to country music and have a good time. And when I built it, I named it the Broken Spoke.'

"I always liked that quote." 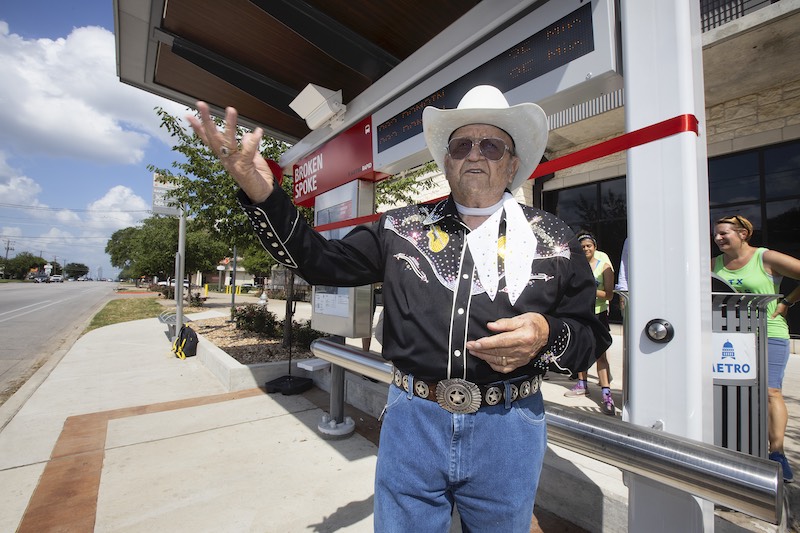 White at the ribbon cutting for a new bus stop in front of the Broken Spoke on May 23, 2019 (Photo by Jana Birchum)

"Hopefully people will come out and think about my dad, and have a Lone Star for him," adds White-Peacock. "That's the best thing people can do right now – help us keep the Broken Spoke alive and keep having a good time. That's what made him happy."

An Austin native, White returned home to begin work on his dance hall dream after leaving the military. Fellow Travis High School graduate Annetta White, who he married at the venue in 1966, threw in with her chicken- fried steak and much more. Late Chronicle writer Margaret Moser broke down the family dynamic in a profile (revisit "Waltz Across Texas," Music, Aug. 2, 2013), while also recognizing the venue as an ATX music incubator:

"The Spoke played a crucial role in the development of progressive country in the early Seventies, booking nontraditional bands alongside traditional idols. The opposite was true at such [local] clubs as Soap Creek, Antone's, and the Armadillo, which were counterculture venues catering to hip youth by booking elderly bluesmen, aging folkies, and country legends. The Broken Spoke stood for traditional country values, and the twain didn't always meet."

In a statement to the Chronicle, the U.S. Representative (D-Austin) recalled, "The event was a hit. Folks were saying, 'Something's going on at the Broken Spoke.' And it still is. The poster hangs in my office. With tickets of $1.50 each, long hairs joined rednecks over long-neck beers and great music – a blueprint for decades to come in our town.

"Before SXSW, before Austin City Limits, there was the Broken Spoke, which James and Annetta White have maintained as an iconic part of what has made Austin the Live Music Capital of the World."

"The Broken Spoke is really the last of a honky-tonk breed, especially in Austin," explains Texas Music Office Director Brendon Anthony. "In many ways, places like the Broken Spoke are glimpses back into a very idealized age. On any given night, you'll find tourists [alongside] seasoned players and singers, and those who aspire to the same. Mr. White and his family created an environment suited to all of these pursuits."

In his uniform of a rhinestone pearl snap, cowboy hat, and scarf, White represented Texas culture for visitors from around the world. He provided grand introductions nightly at the Spoke, which can pack some 600 visitors. Monte Warden has played the last Friday of every month for almost five years with the Wagoneers.

"Before we start, Mr. White would go get his family's 48-star American flag and lead the crowd in the Pledge of Allegiance like the most natural thing in the world," says Warden, booked there this Friday. "You could tell from peoples' faces, especially out of towners, they hadn't said the Pledge since elementary school. He was certainly conscious of the fact that it was a lot of people's first time in a Texas honky-tonk. He looked the part, and he lived the part.

"The Whites are ambassadors for what country music is supposed to be."

"[It's] the real deal country music dancehall," she emails. "When you're booked at the Spoke, you play ALL night and every great country dance song you can think of! He was always there with a big smile on his face.

The last time I spoke with White, July 2020, he was out checking on his ranch west of Austin. "I've had it for 50 years. It's where I like to come and get away from anything," he shared. He called it a big mistake to bring his dachshund Willie, who always barks at the cows.

I called about a recent burglary after thieves slammed a truck into the venue's facade to steal an outdoor ATM machine. With typical flair, White told me they "handed police the case on a silver platter" due to their "spy camera" catching the incident. Fans fundraised over $6,000 to cover repairs, which White said he wouldn't typically accept but making rent during a pandemic had proved challenging.

Temperatures near 101, White offered some final wisdom before hanging up.

"We've been there a long time," he said. "I don't want to leave. I don't want this damn virus to kill live music, whether it's country or rock or blues or whatever. It's just a damn shame.

"You can listen on TV or radio, but nothing beats being there with live music, and letting the music take you where it takes you. You can't be the live music capital if you ain't got music. Makes sense to me!" 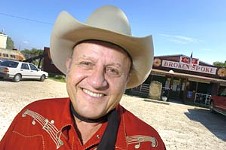 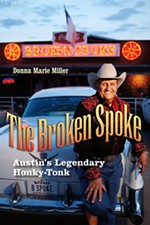