Checking in With Area Musicians Yielded 80,000 Words of Pandemic Realness 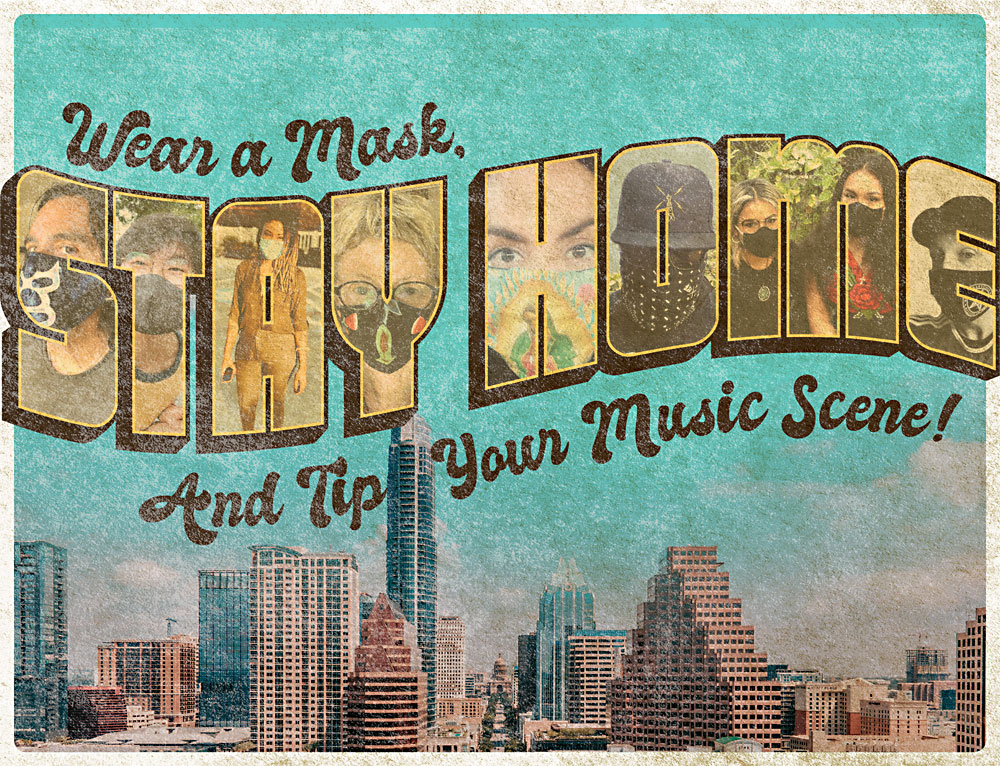 On Wednesday, March 25, 2020, 10:10am – all area schools having shut down suddenly March 13 due to the spread of the coronavirus – I emailed an Austin Music Awards multiple Band(leader) of the Year winner and media progressive:

"Hey man, how are you? I wanted to start checking in with some musicians – get a window into individual situations through short Q&A's. Mind if I send you a few questions?"

Four minutes is all it took for Shinyribs major-domo Kevin Russell to respond affirmatively, so I jotted them down right there and then. Five queries obviously covered more ground than three, but seven felt intrusive. Voilà, a COVID-19 questionnaire in 122 words.

"Hey Raoul, nice to hear from you," Russell wrote back. "Me and my fam and band are fine for the time being, and sure, send some questions. Mayor Adler shared a song of mine I did during this shut down. I wrote it as a kind of PSA after seeing clearly that a third of the people didn't seem to be understanding the message to stay the fuck home!" 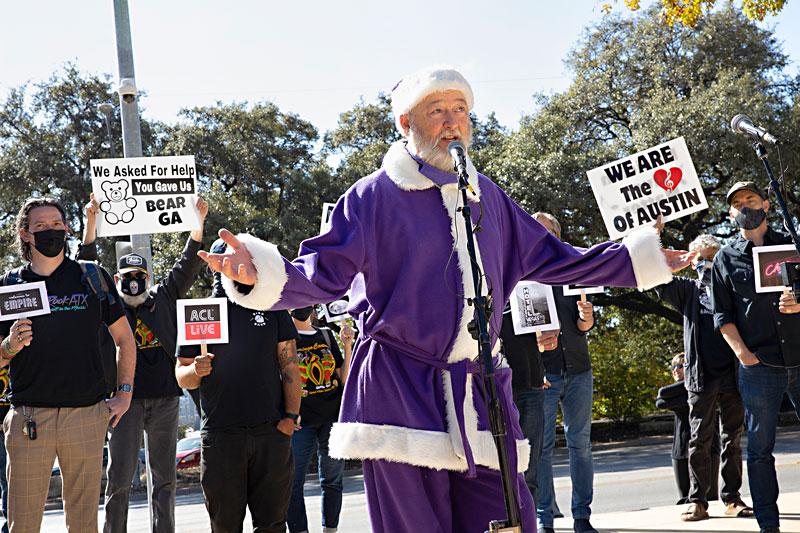 Kevin Russell during a Come & Save It rally at City Hall on Nov. 19 (Photo by Jana Birchum)

Sample this composite Checking In.

Austin Chronicle: Where are you sheltering and under what circumstances? Who else is there and how's that going?

Tameca Jones: I am chilling in da Braunf, known as New Braunfels to common folk, with my mom and daughter. It's going well. Libras and Geminis get along swimmingly.

AC: At what point did COVID-19 shut down operations for you, and what went down with the ship, so to speak, both personally and professionally?

Charley Crockett: Our last show was at the Lonesome Rose in San Antonio on March 2 with Garrett T. Capps and Augie Meyers. Texas Public Radio filmed that night. We had a 10-day break after that where I headed up to Colorado and New Mexico to get ready for what would've been the heaviest tour schedule of my career so far.

Hell, we had four festival dates with Willie Nelson.

I got asked to play Jazz Fest after one of the organizers saw us at Hi-Ho Lounge on St. Claude in New Orleans in January. The promoter that night reminded me that I came up to him outside the club one night and told him I'd play that festival one day. That was eight years ago!

It's been hard not to think about where we'd be playing right now if not for these hard times. I remember we were sitting at a diner in Cloudcroft, N.M., when they called off [South by Southwest]. I knew right then, deep down in my belly, that this year was going out the tour bus window.

You can't stop what's comin' though, and I've made a career out of the most unlikely circumstances. I can take this and whatever's behind it. 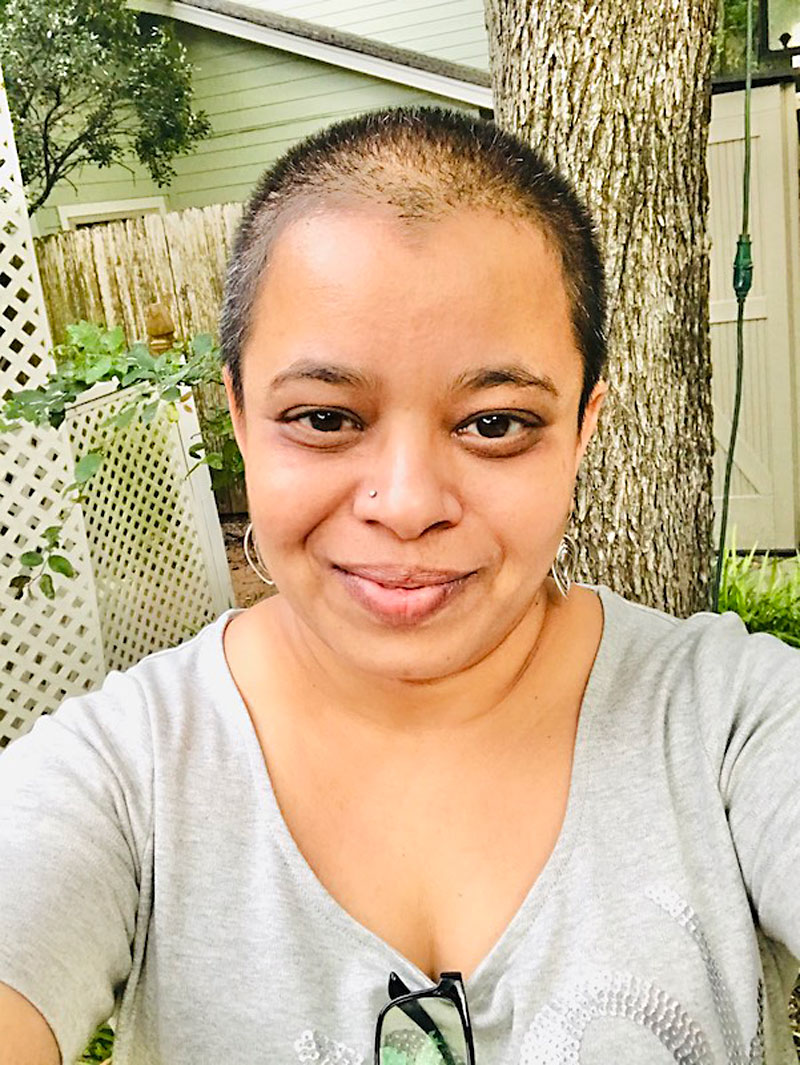 Erika Wennerstrom: I think we just adapt as we have in humanity always. These online shows allow some way to connect. It's certainly not ideal, but that's just the reality we're in.

Music is medicine and it can be very helpful in comforting people through these challenges. Where there's a will, there's a way. I have concerns for the future of our music community, though.

My tour was moved to next year, but then I wonder if the venues will still be around. I really hope our government does something to help these businesses survive. It's hard to imagine Austin without music venues. We will find a way to rebuild regardless, but help from the government would help how quickly we can rebuild.

I'm just hoping for the best for us all.

AC: Everyone's had to shift or drastically alter their work situation. What does that look like for you?

Kydd Jones: Nowadays, I'm working early in the mornings and late at night. It's similar to my old schedule, but now there is less or no contact. I'm talking through chat or DMs, and sending files through email. I've always had a home studio, so my family is used to seeing me nerd out for hours mixing or just working on ideas.

AC: What's your soundtrack for the apocalypse and what role does music play for you as a fan and scholar of it in times of hardship?

DJ Chicken George: During this time of action, I'm listening to lots of new protest music like Third Root and Run the Jewels, as well as revisiting classics such as Gil Scott-Heron and the Last Poets. For me, this music has always served as a vital space for reflection, information, and documentation, while also providing the inspiration we need to make the healing process a bit more bearable. 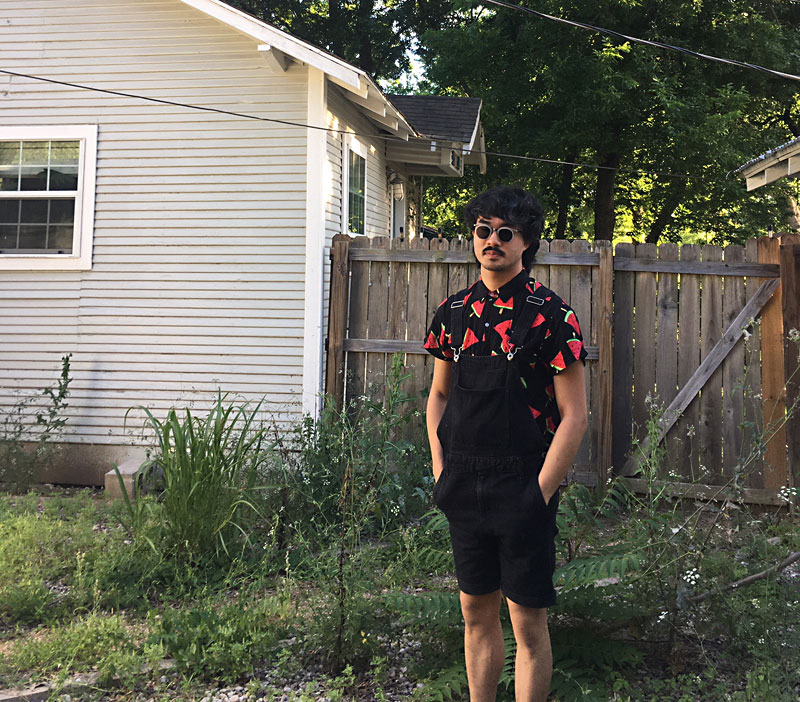 Longest entry: 2,500 words. Shortest: 210. And never a length specified for answers to these same five questions.

Though 100 sent back their survey – more, actually, as several entries host multiple respondents – double that number received an invitation to participate. In a disaster area, as a journalist, document as many stories as possible. Diverse by design given the pandemic's prey on communities of color and economic disadvantage, Checking In managed to breach even language (Peelander-Z) and sight (D-Madness) barriers. 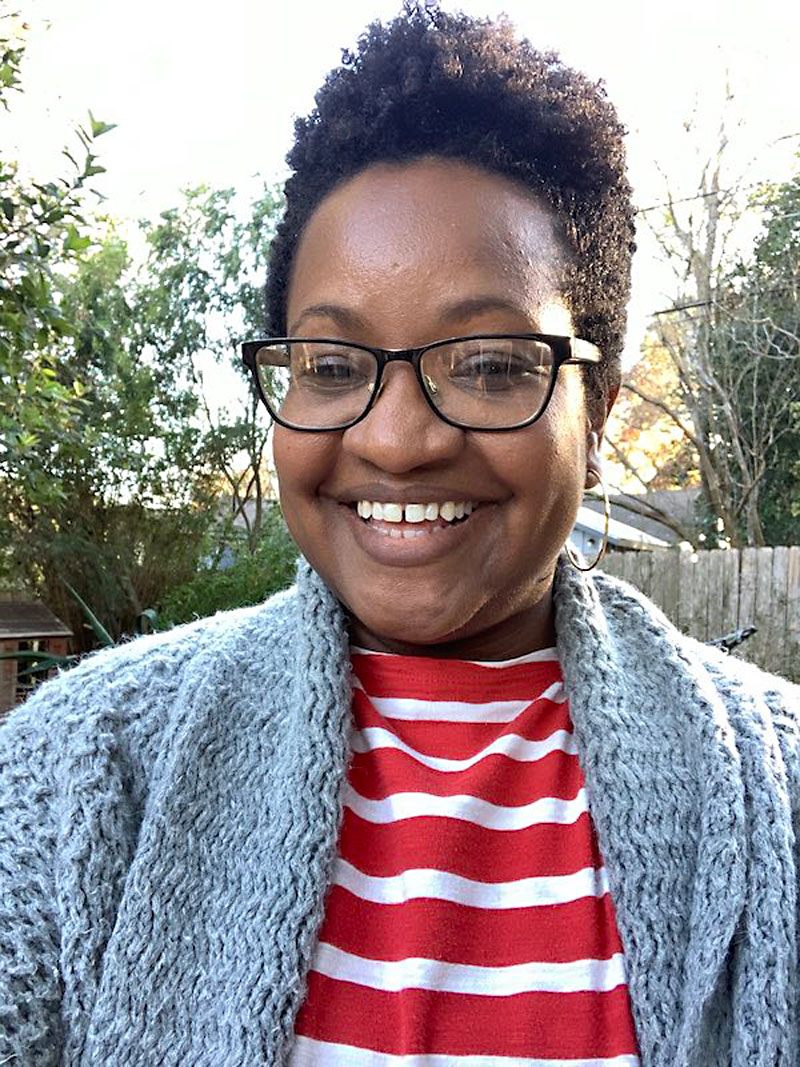 Grand conclusions? Everyone felt the same: isolated and creatively combating it since March 13. They mourned their live craft and, equally so, the disconnect a community endures when it can't gather culturally. Like everyone else, they adapted as possible, and music and silence saturated that pivot as necessary for simple survival.

Their words will, because these musicians don't merely soundtrack our lives in Austin. Music isn't outer, external. If the soul exists, it sings.

Like, say, entry No. 25, Austin Music Awards Hall of Famer Ruthie Foster, and No. 71, legitimate legend Marcia Ball. "Legend" lies atop the music cliche heap, but her 10 fingers, 88 keys, and a Gulf Coast-gator hunger for country, blues, and roots built Austin's musical oasis as sure as LBJ stood 6-foot-4. Commander Cody & the Lost Planet Airmen axe-wielder Bill Kirchen (No. 57) fits much of that description as well.

In fact, sway to the musical yin and yang of women sowing innate feminism – the Deer's Grace Rowland, Little Mazarn's Lindsey Verrill – and bluesmen knuckling into masculinity (Johnny Nicolas, Eric Tessmer), then the meeting of the two: Sue Foley, Rochelle & the Sidewinders.

Check out what Austin music sounded like in 2020: austinchronicle.com/checking-in. 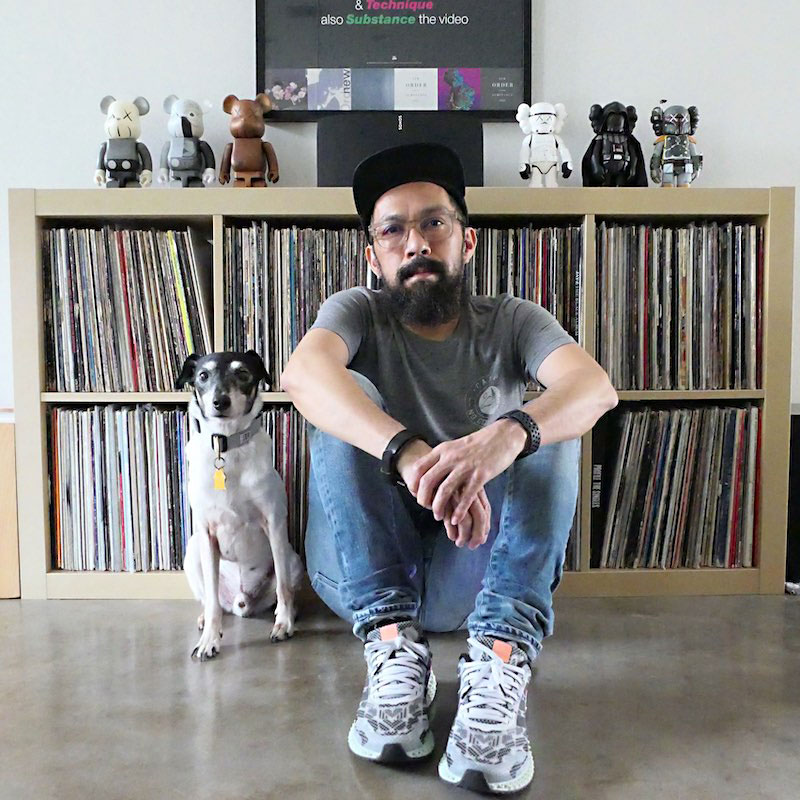 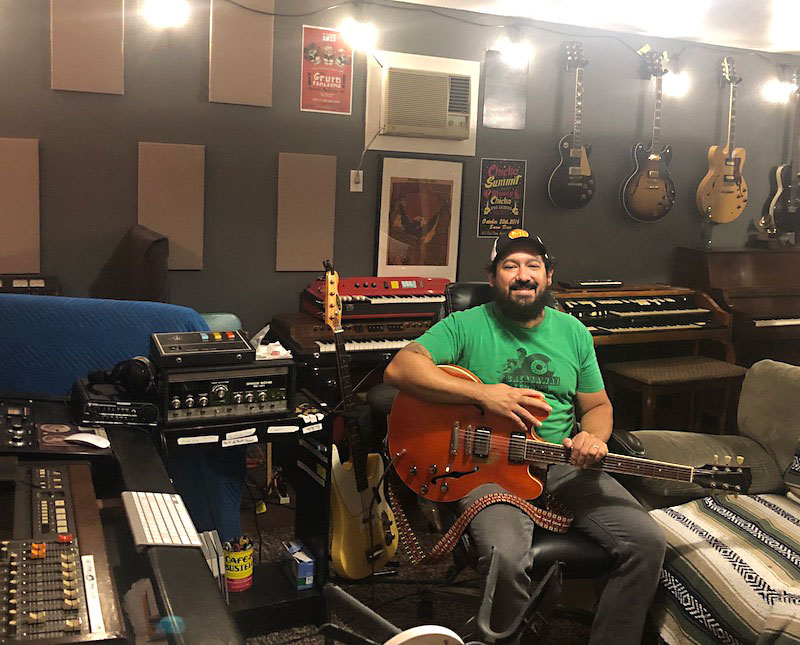