Faster Than Sound: Don’t DM Me, Vote in the Austin Music Poll! Last year's Austin Music Awards, held at the Moody Theater on March 11, turned out to be the final show I attended in 2020. That also proved the last time I dressed up with a tiny purse, saw those friends you only run into at shows, and went out on the patio to talk shit about Austin music. While the 40th annual Austin Music Poll can't account for such nuances, it addresses the ongoing pandemic head-on.

Detailed last week in "The Austin Music Poll Got COVID-19," (Music, Jan. 8), the ballot winnowed down to 20 categories and the Hall of Fame as spearheaded by the coronavirus-specific new categories including Best Livestreaming Artist, Best 2020-Themed Song, and Musician Who Went Above & Beyond. As evidenced by passionate emails for broadening the Best Online Series category, the Poll and the Austin Music Awards they bestow still mean a lot locally after four long decades. A body of 600 homegrown music professionals helped determine the multiple-choice nominees, now online at vote.austinchronicle.com or by mail-in ballot until Feb. 1.

Peep my picks here, and if you vehemently disagree, don't DM me – go vote!

Band of the Year

O ... And You Will Know Us by the Trail of Dead


Musician of the Year


Songwriter of the Year


Hip-Hop Artist of the Year

Album of the Year

O David Ramirez, My Love Is a Hurricane

O The Teeta, The Quarantine


Song of the Year

Ø "Walk With Me Austin," Adrian Quesada and various artists


Video of the Year

Ø End of an Ear

O A Night for Austin

Ø Blues on the Screen

O HOME Cookin' for the Holidays

O ... And You Will Know Us by the Trail of Dead

Ø "Death to the DNC," Big Bill


Musician Who Went Above & Beyond

What did you miss the most this year?

Hanging out on the patio at Cheer Up Charlies. 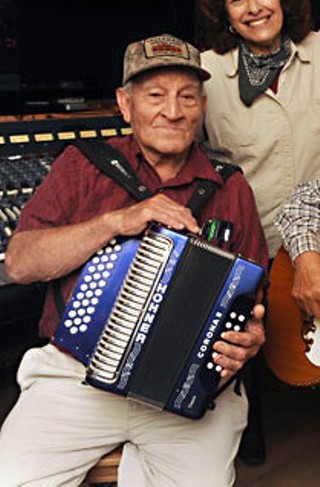 Chencho Flores, elder statesman of local conjunto, has died at age 91 from the coronavirus. The local accordionist, who played his first show on Sixth Street in 1947, spent decades with Austin Music Awards Hall of Famers Conjunto Los Pinkys. Of the Eastsiders' Sunday residency at the White Horse, which attracted a diverse, multigenerational crowd of regulars, he told the Chronicle in 2013: "There's a lot of old people there too. They still remember me in my prime." Sadly, 2020 claimed Vicente "Chente" Alonzo, a member of Chencho Flores y Su Conjunto, and early Flores collaborator Manuel "Cowboy" Donley.

Kinseli Baricuatro, busy session bassist seen with Austin acts including Nayome, Jay Wile, Socha, and Springful, debuted her instrumental expertise on She Shreds last month. The 23-year-old's guide for the online mag, "Back to Bassics: A Guide to the Low End," covers strings, amps, and everything else to get started. Hear her play over on Instagram @kinseli.