The Austin Music Poll Got COVID-19 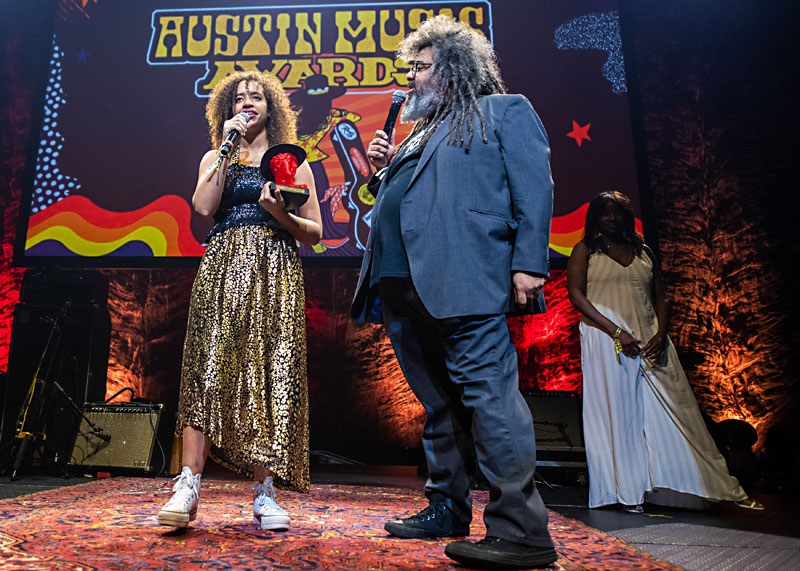 For hundreds of locals, the 2019/2020 Austin Music Awards transpired as the last big show they attended before life turned upside down.

Wednesday, March 11, 2020, ACL Live at the Moody Theater: We were so naive, passing joints backstage on the "Willie's Place" balcony while getting and giving all the hugs and handshakes you could ever desire and living in utter denial of how bad the COVID-19 pandemic would soon become. City officials canceled South by Southwest the Friday previously, but venues worked to host unofficial shows and bands planned on playing them.

Five days later – 120 hours – Best Music Venue the Continental Club closed down in the interest of public safety and hasn't reopened. That added to an industry chorus all too familiar by now, one hammered home six months later when Best Festival honoree ACL Music Fest didn't hold a physical event. In 2020, no Austin festival did.

In fact, basically every musician who walked offstage at the Moody that night eyeballing a psychedelic cowboy statuette soon saw every gig on their planner scratched.

The devastation endures, naturally. Where Best Booker Trish Connelly counted no rooms or patios to fill in the ensuing 42 weeks, that honor's 2016/2017 prizewinner, Margin Walker, went out of business only last month. Their co-founder Graham Williams inducted Austin punk kings the Big Boys into the AMA Hall of Fame that same year, 2017.

Now, Austin music finds itself in completely uncharted territory. Never has our scene experienced the fiscal devastation of the last calendar year. The coronavirus didn't just drastically alter the lives of homegrown musicians and fans. It destabilized Austin's entire ecosystem.

If society learned anything in the global gap year, it's that our species doesn't always get to dictate the situation. Sometimes, the situation dictates you.

Today marks the launch of the 40th annual Austin Music Poll. Four decades feels like an improbable life span for any independent endeavor relating to local music. Driving that history is a strong sense of tradition ... a tradition we set aside, in part.

The Music Poll you're seeing today contains drastic alterations. The ballot consists of 20 categories and the Hall of Fame, instead of over 50. Nearly half are brand-new awards: Musician Who Went Above and Beyond, Best 2020-Themed Song, Best Innovation/Business Pivot, Best Livestreaming Artist, Best Virtual Event, Best Fundraising Effort, Best Online Series, and Best Music Video.

As the Poll administrators going back to the founding year of The Austin Chronicle, 1981, we crafted a multiple-choice checklist reflecting what's happened to Austin music over the last 10 months, rather than a ballot upholding currently less-relevant categories for the sheer sake of continuity or, worse, obligation. As such, Best Performing Bands awards and almost all genre categories are sitting out for at least a cycle. Since the majority of artists aren't performing live out of safety concerns for themselves and their audience, it didn't seem right that bands willing to tempt fate by gigging received undue advantage.

Long term, the absent categories aren't canceled. To borrow a parlance currently employed by concert promoters who don't want to issue ticket refunds, they're "postponed." And because worldwide vaccination schedules remain uncertain at best, next year's Poll cull will likely reflect the unknowns of the next 12 months.

We did keep one genre category: Hip-Hop Artist of the Year. Given the state of race relations in a nation divided, reasons for such a spotlight appear obvious. Yet, if you've followed our weekly "PL-ATX List" since last spring, beat rhyming might be the single biggest growth industry in local soundscaping.

Once again, we used a voting body composed of over 600 Austin music professionals to assemble the nominations. In their selections, both consensus and variety emerged. Ultimately, that totaled a list of nominees we're honored to present, and we hope the artists, businesses, and bands featured are proud to be included.

Public voting opens now on the Chronicle website and runs until February 1.

Expression births artistry. When humans gather, communion occurs. Feeling purposeful in that singularly central regard proved the greatest challenge of 2020.

Encouragement, acknowledgment, and gratitude thus fuel our belief that community-voted awards are more important than ever.

Granted, actually delivering those awards poses particular challenges when there's an airborne virus still threatening people's lives. That job now falls to us. We think we've hit on a novel idea, too – again, one suited to the circumstances.

For starters, former Chronicle Editor Louis Black quietly retired from producing the Austin Music Awards themselves. In recent years, the SXSW co-founder operated the AMAs independently from the paper, first via Louis Black Productions and later through the Society for the Preservation of Texas Music. In that time, we administered the Poll as we have since shortly after the paper hit print on Sept. 1, 1981.

Now, additionally, we're running the show as well, and going forward, we plan to do that in our trademark scrappy, independent, and unfancy way. Except, of course, there won't be an awards show this year. At least not one with lots of hugs and backstage partying.

While many of us held out hope we'd be able to safely congregate by March, that's become increasingly unlikely. Still, it's extremely important that we honor the winners who'll arise over the next month of citywide voting. We're working on something that's more crafty, unusual, and exciting than a mere virtual version of the normal awards ceremony, but we can't give it away just yet, so stay tuned, as they say.