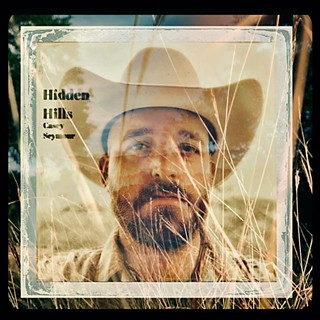 "I wasn't planning on releasing a couple positive, inspirational songs," admits Casey Seymour, whose solo debut contains the unabashedly slinky pop gem "Come Together 2021" and the emotional "We Persevere.""It's weird to put those out with all my years of partying."

A local equivalent to the Dude, the style-to-burn drummer known for his white Stetson and kit work with Croy & the Boys and Chris Catalena remains a compellingly carefree party mystic at Austin honky-tonks and bars. Now one year sober, he's strictly quarantined, dedicated to self-help, and releasing his first music as a singer. That ascendant lifestyle transformation manifests into a lush and lovable six-song set where his breathy vocals fall over shades of tropicália, psychedelia, and layered soundscape grooves.

Tracked in deep isolation at his homespun Dripping Springs studio, the sturdy rhythms and airy melodies of Hidden Hills incarnate on "Casio Clouds" and standout "Instillations" imitates urbanite pretentiousness with the hilarious quatrain, "White walls, illumination, chords of string... art show" over nylon guitar and piano. Seymour says the 2019 death of his Living Grateful bandmate Greg Enlow catalyzed the creative transformation from which the EP arose.

"After that, I kinda lost my shit," reveals Seymour. "I was drinking way too much and using that to self-medicate. I could see myself going toward the same darkness that Greg went down, being suicidal almost. I had to reach out to [musician mental health/addiction service] the SIMS Foundation to get my shit together. Luckily, they put me in touch with a counselor who's been so awesome and knows a lot about music.

"That's really helped me have the energy to be creative." – Kevin Curtin

"Da 04" welcomes Big 4x on Quin NFN's anticipated new single "Right Now." The East Austin rapper's latest release, which features brashly explicit DaBaby signee Stunna 4 Vegas (Khalick Caldwell), received an early release last month after an initial target date of Jan. 8. Frequent collaborator CioMadeTheTrack provides a simple, yet intimidating piano melody while the soon-to-be 20-year-old local and 25-year-old North Carolina native each deliver a verse of trademark content. The 10K Projects rapper merrily brags about having relations with women "in more rooms than the White House," going from tax-free living to writing off taxes, and the ability to "spray" dirty-playing oppressors like Lysol. Stunna, who happily gets hype alongside the NFN Entertainment collective in the music video viewed by 500,000-plus, matches Quin's energy by affirming he, too, will get active at any moment if necessary. – Derek Udensi

Cameron Allen quickly racked up buzz within the Austin hip-hop scene thanks to scratchy-voiced, high-octane rhyming about gritty environments. The young MC used this momentum to strike a deal with Babygrande Records last month. Dubbo's Double O Records imprint also receives backing from the NYC indie as part of the deal. "Ben 10," re-released by Babygrande in December after previously amassing steam on Spotify, receives a crystal clear visual courtesy of Pflugerville native Kade Fresco and his Fresco Filmz production company. The video primarily features the ascending Austinite blowing up his set while backed by eager comrades. Cartoon Network superhero Ben 10 serves as a metaphor for Allen's transformation: "I had to make a decision/ Go get a bag/ Gotta get out the trenches," he offers in reference to his hustling and pursuit of music after getting expelled from school. – Derek Udensi

Since 2009, Bloody Knives' high-propensity pairing of punk energy and user-friendly industrial with shoegaze sensibilities nestled the group among the alumni of DFW dream-pop specialists Saint Marie Records. Fifth studio full-length self-released digitally in early December, 70 Years of Static gallops through its 10-course meal of precision beat-keeping from percussionist/programmer Jake McCown, while Preston Maddox's vocals glide in unison to the rhythm à la Swervedriver's Adam Franklin. Highlights "Eclipse," "Extinction," and "Parasomnia" slot in among the eight remixes included with the release, sharpened up and made club-ready by Dean Garcia of Curve, Portland's We Are Parasols, and more. – Greg Stitt

Released on CD last year via Detroit's Small Stone Records and recently pressed on quickly dwindling colored wax by Germany's Kozmik Artifactz, local improvisational psych rock trio Tia Carrera's fifth studio album revels in cathartic riffology. On their first long-player since Cosmic Priestess a decade ago now, guitarist Jason Morales and drummer Erik Conn initiate ex-Dixie Witch thrumster Curt Christenson on the low end, and his rumbling presence gives the locals a heavier anchor than before. Between the solid ground on which Christenson puts his bandmates and the polish playing together since 1999 inevitably applies, the five tracks come across as less the barely controlled anarchy of the early years and more telepathic songcraft. "Layback" kicks open the blast doors with joyful abandon, "Swingin' Wing" lights a blistering fire under the trio's blues-rock roots, and the epic title cut melts down like a stone on the surface of Venus, with Christenson just holding Conn and Morales back from the abyss. Heavy psych and spontaneous composition can be a match made in hell, but Tia Carrera blasts off heavenward, just as they've done from the get-go. Small Stone's CD pressing also contains "Visitors" and "Early Purple," originally released as a 2019 12-inch. – Michael Toland

"Did this shit with three whammys/ To make it up I need three Grammys/ 'Cause I'm Black, female, and gay/ And somehow still found a way!" So celebrates Kori Roy with these words on "Found a Way." The Afro-Latina from the tiny Gulf Coast locale of Palacios moves on down the road from the smooth R&B sounds of recent mixtapes on her debut album, Ballsy. Bass-riddled "I Feel a Way" boasts about her cold flow and laughs at lowlife males whose mothers regret raising a "sucker." She worships a lover on "Mad" because her beliefs land "opposite of conservative." Tracks such as "Never Coming Down" maintain elements of Duke's previous form, but songs like "Over My Head" display a glorious penchant for unadulterated trash talk. Then there's the ironically titled "Get Off My Dick," where claims include a self-appointed award for Ghostwriter of the ATX. Above all, Ballsy represents an artist prepared to simply snatch her just due if it's not served up soon. – Derek Udensi

David Garza acts as a musical reagent, creating a unique alchemy in every project he touches, most recently co-producing last year's stunning return for Fiona Apple, Fetch the Bolt Cutters. Now holed up in L.A., the longtime Austinite continues his own prolific output with the beautifully evocative Nightwalker, a world of lo-fi rhythms full of the Texan's trademark lyrical quirk and beatlike poetry. The LP runs late-night dreams through lonely lockdown streets but bursts with life, "Sing Me a Sweet Dream" echoing Cohen and Waits leaning against the piano. John C. Reilly guests harmonies for the gentle "Rosa," while "Chablis" sips hypnotic. The album strikes playful and full of curiosity in the marvel of slight everyday dramas, sonically restless but settled in a calm solitary haze. – Doug Freeman

The debut offering from Hoyt Van Tanner, aka Chris Hoyt of Lockhart's indie pizza hub Loop & Lil's, plucks an immediate chord tuned to John Prine and Blaze Foley with EP opener "EOTW." The track spins the end of the world as gentle lullaby, with Jess Williamson shading the apocalypse in backing vocals. Likewise, "Jericho Is for Lovers" echoes the melody of Wilco and Billy Bragg's "Way Over Yonder in a Minor Key," as the songwriter's dusky, Colter Wall-ish voice patiently toils through loves and losses ("Toki Doki"). Shane Renfro of RF Shannon fills out the largely sparse sound as producer, especially on the four-track's closing ballad "Hey, Billy." – Doug Freeman

Previewing her first recordings since 2016, the upcoming Salvation and Soul Restoration EP, Cari Hutson showcases powerful and emotionally gripping single "The Rescue." The local songwriter penned the tune shortly after her mother's death this past September, and confronts their tough relationship and her parent's long struggle with alcoholism. Hutson delves into the hard frustration and failures, but with an extreme empathy that gives the song a depth and understanding of addiction. Her sharp but subtle vocals ring with the confluence of grief and relief, turning on unanswerable questions in the soft strings and Wurlitzer backing, haunting and redemptive. – Doug Freeman