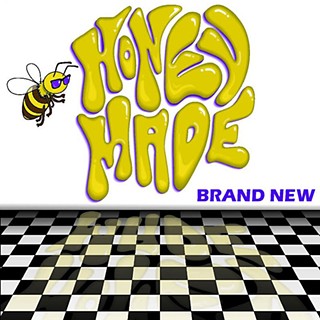 One deep sleeper of 2020: November's Brand New by Honey Made. Chances are the eight-foot scrim in the front window of Waterloo Records didn't register thanks to the graham cracker album art – and maybe just maybe a global pandemic. Inside the CD, producer (Steve Berlin of Los Lobos), engineer (Jim Vollentine), and studio (Texas Treefort) all make the credits roll, yet zero mention appears of the actual group turning soul-infused retro nectar into viscous ear candy.

Opening with Tamara Mack's guest sass, sauce, and lip, low-down bump-n-grind "Chicken Sweats" delivers as promised, dewy and humid as spring break down on Rainey Street. The succeeding title track, an R&B epidural of pure vocal spirit riding a call and response of guitar and keys, then lays o-u-t. Stone step-off moments such as "Brand New" transcend time as both midnight mover and midday interlude.

Ms. Mack circles back on the horn-braised tell-it-like-it-is "Be True," a testament to everyday perseverance and the vocal throes of deep American roots manifestation. One drop riddem "Smoove" struts the perfect rejoinder, and loping Seventies urbanity "Can You Feel It" cements an LP midsection prompting reflexive replays. Late-game instrumental throwdown "Southern Fried Funk" platforms a breakdance battle between trombone/trumpet/sax and axe.

Echoing funk guitar from Andres Villegas and the dense synth pulse of Félix Pacheco cast a mystic rhythm over which guest singer Kalu James enters with a hands-in-the-air refrain sung in Igbo, a native language in Southeastern Nigeria. Consider it another stone-cold global groove from Cilantro Boombox, the capital's Latin and pan-African dance floor specialists and longtime Sahara Lounge residency, and a poignant moment for James. "It's also ironic that it took a Venezuelan for this Nigerian to sing an Afrobeat tune, a genre that originated in Nigeria," James wrote of "Master Plan." "[It] speaks to the connective power of music and the strength of the idea and notion of America: a nation of immigrants." – Kevin Curtin


Wiardon: Kame Up Off A Lick

East Austin bandit Will Liardon completes his 2020 rap hat trick of solid projects with last month's Kame Up Off a Lick. The 32-minute project continues the "02" native's mold of blending together brash admonishments, hustler braggadocio, and sprinkles of grim autobiographical anecdotes across its 14 songs. "I was 14 when I hit my first lick," the recently turned 18-year-old reveals over the eerie, made for true-crime television backdrop of "Fox 5." "Overst02d" features the ghastly line "Walk down on an opp, I lift the mask so he can see my face." He briefly shakes off doubters of his story on "Off the Muscle." "All facts, I ain't rap it if I ain't live it," he affirms. The producer now primarily operating behind the mic consistently switches his beat selection from tape-to-tape. Instrumentals on Kame Up Off a Lick range from mirroring prime Roc-A-Fella's high-pitched soul sampling ("Outro") to barren and bass-heavy ("Shoebox Money"). – Derek Udensi

WIARDON · KAME UP OFF A LICK

Double bassist Tarik Hassan boasts an impressive résumé encompassing work with local and national jazz greats including James Polk, Ephraim Owens, Andre Hayward, and a couple Marsalis brothers. As good a player as he's become, with a near-perfect balance of melody and groove, his finger and arco work is outshined by his abilities as a composer and arranger on Yalla. Hassan folds multicultural influences into a post-bop core, wherein a close ear reveals Latin and Middle Eastern strains woven so skillfully into the arrangements that tracks like "Dance of the Grackles" and "Twice at Once" never become as obvious as fusion. Shapeshifting beauty on "Dublin" and "Arab Spring" point to an ability to create future standards, bringing out the best of both band and tune. Joined by superb local players including pianist Ben Irom, guitarist Brian Pardo, and most significantly violinist Kimberly Zielnicki, the bandleader blends disparate elements into a keenly crafted whole. – Michael Toland

Inspired by a recording from her trailblazing aunt, Mexican American singer Eva Garza, Austin's Leti Garza recorded "La Empaliza" on her previous long-player, 2017's El Unico Para Mi (The Only One for Me). Now, local Grammy-winning producer Michael Ramos remixes the track with a techno, four-on-the-floor fervor. The original bursts with trumpet struts, clavinet splashes, and timbales, but Ramos' version speeds up the song's bright merengue jolt with electronic flourishes of playful synths and boogie breakdowns. In 2020's tumultuous times, Garza reminds her listeners to "Breathe. Move. Dance," as the song "sends out the call to action to embrace life no matter what the hell is beating down the door." The remix also comes with an announcement of the forthcoming Border Land, set for release March 24, 2021. The EP steers into her personal experiences with the U.S./Mexico immigration crisis. – Alejandra Ramirez

Little Mazarn, "Story of an Artist"

While there's no shortage of Daniel Johnston covers, including Built to Spill Plays the Songs of Daniel Johnston and tribute LP Honey I Sure Miss You (both 2020), Little Mazarn taps something essential with their rendition of "Story of an Artist." Lindsey Verrill's sparse banjo pulls at the slow drawl of her vocals, the singer's connection to the song coming through with feeling, a beautiful sadness. Likewise, Jeff Johnston's saw adds an ethereal haunt to the lo-fi track, accentuated by his telephoned vocals that echo otherworldly, sounding like the late songwriter himself duetting from beyond. – Doug Freeman

A burst of gnarled guitar, some freeform rhythm, and a gleeful shout kick off "Meds," the first cut on the second album from drummer Daniel Dufour, bassist Sam Pankey, keyboardist Sean Giddings, and guitarist Carter Arrington. Like the locals' Distance in 2018, Convergence masterfully executes a variety of jazz sidebars with psychic interplay. The collectively composed fusion of "Meds" contrasts the gentle swing of Giddings' "Venice," while the third stream simmer of Pankey's "Figure It Out" complements the unorthodox blues of Dufour's "Bones." Interestingly, despite the improvisatory nature of the musicians' chosen field, there's little extended soloing here. Whether it's Arrington's lyrical snarl, Giddings' grounded melodics, Dufour's steady swing, or Pankey's bluesy thrum, each player expresses himself with what needs to be said and no more, leading to a concise 33 minutes – just like A Love Supreme. There may not be many escalating climaxes, but tasteful, tuneful, and consistent pleasures abound. – Michael Toland

For his second solo LP, Hammond B-3 ace Mike Flanigin entered Fire Station Studios in San Marcos with fellow Austin blues specialists (and squeeze) Sue Foley on guitar and Stevie Ray Vaughan's own drummer Chris "Whipper" Layton. Ten Texas blues standards live from the floor, bleeding mics and all, emerged. Layton and Flanigin's left hand sync as deftly as the tub-smasher did with Double Trouble bassist Tommy Shannon. That fat, articulate bottom end provides a perfect cushion for the warm harmonic buzz issuing from the organist's right hand. That sets up Foley's cutting six-string bursts and the leader's beautiful rasp of a voice. All of which grace choice material from the great Lightnin' Hopkins (the title track) to Lazy Lester ("If You Think I've Lost You," on whose original Foley played). Tip back a potent, handmade antidote to a dangerous year. – Tim Stegall

Mark Willenborg's debut LP comes as advertised, classic barstool country just looking for a honky-tonk to serenade. The local singer showcases a honed dance floor instinct to keep bodies moving, with songs of leaving, being left, and then going round again swinging between a modern day Ernest Tubb and Ray Price. Produced by the great Marty Muse, who contributes trademark steel guitar and wrangles a host of A-list backers, the title track tinkles behind Floyd Domino's keys and "Tear in My Eye" struts with Brian Beken's fiddle. The bandleader's ballads balance the album with the smooth low croon of "Interesting Old Man," which broods like Jamey Johnson, and the sharp, poignant "Someday" offering a potential hit in the arsenal of the right superstar. – Doug Freeman