As the title brands, Wilson mucks around in the South's grittiest genre, emphasizing his harmonica skillz and silver lining slide guitar. Opener "Ruling the World" begins with a spike, a cacophony note that quickly settles into an electro-analog groove of disembodied, isolationist blues. JW's vacuum-lock vocal intonation hovers botlike, vulnerable in its monotone stoicism, "happy hanging around" and thinking about rolling a joint, because "I never really cared about ruling the world."

Stepping off into another dimension – a sample, a loop, Ibiza horns (Mike St. Clair), and the studio sorcerer's piano – ensuing instrumental "It's Always Taken From the Blues" reiterates your upload into zero gravity. Here, pandemic woes soften to a tube-amp glow, the light drizzle of "The Streets Were Alive" sprinkling Southwestern horn blear, Spanish guitar, rippling keys, and digital percussion. Says Deluxe Wilson: "Remember when the streets were alive?/ It's been strange watching them die," soon giving way to, "Waiting on the world to come back to life."

Midpoint "Milk & Honey," a dreamy, blood-splattered John Lennon specter in title alone ("Bang, bang, there's blood on the wall/ Bang, bang, there's blood on us all") simmers a dread urbanity down to its mouth harp rising up from piano-soaked streets like steam: "This ain't no time of joy and wonder/ It's just a time filled with hate and fear." Wilson slo-mos blood in the gutters better than Westworld.

Initial single "Be Like the Water" pulses over you with Jacuzzi fuzz: "Try and tell yourself everything's cool, everything's fine."

Landing spacecraft "The Long Surrender" cuts through the dreamscape penultimately with a phosphorescent, Frusciante-esque guitar line and resignation: "Time, he takes what he wants to, whenever he wants to/ ... But Time, he don't care if you're lonely/ He don't care if you're high/ You're just a moment to him/ 'Cause the beat, it keeps on pounding on." – Raoul Hernandez

Among the merch on Aaron LaCombe's website is a shirt declaring the songwriter "Ain't Shit in Austin," but not for much longer. The Hill Country troubadour's fourth LP and second this year lays out simple, back-porch epiphanies with stellar polish. Lyrically, he's straightforward and earnest, with an ear for exceptional melodies. Opener "A Little Bit Broken" could sit among Brent Cobb's best as Patrick Lyons' mandolin and banjo licks easy, and the nostalgia-tipped "All Wrong" lingers between tight-rhymed classic country verses. Yet there's enough grit and regret to keep LaCombe's glass full, from the growling "Hell Ain't Ready for Me" to the hard strum of "I Just Miss Her Is All," while the title track turns up the electric guitar. The Detroit native's work ranks among the best of Red Dirt balladeers, with touches of Jason Boland and Randy Rogers, but also a keen sense of the new Nashville sound behind superstars like Chris Stapleton. Aaron LaCombe isn't widely known in Austin, but he'll soon rise to notice beyond it. – Doug Freeman

On the Sadtles' three-song debut, Michael Agresta doesn't seek to define love directly, but rather represents it through relative concepts. On "Heaven," the understated vocalist artfully equates being in another's arms to the purity needed to get to the promised land, adding, "If we can't get to heaven, we could get a motel." Agresta's a journalist with recent bylines in The Atlantic and Texas Monthly, but here he's documenting matters of the soul over gentle compositions helmed by Diego and Tomas Garcia-Olano, and gracefully completed by the harmony vocals of Caroline Wright. Putting his own imperfections under the knife, the excellent "Sick Heart" builds confidence in being broken, yet devoted. – Kevin Curtin

Following the breakout success of 1996's A Few Small Repairs, Shawn Colvin recorded a hauntingly beautiful and tender LP of seasonal and traditional tunes. Adapted from 1965 book Lullabies and Night Songs by composer Alec Wilder and beloved children's author Maurice Sendak, Holiday Songs and Lullabies retains a magical and weary tone, captured in the sparse piano and strings of songs like "In the Bleak Mid-Winter" and "Christmas Time Is Here." Colvin wields these gorgeously wrought tunes alongside some of her own, with full-band backing for a special holiday livestream. Virtual meet-and-greet also available. – Doug Freeman

Wrestling underbrush to catalog Austin's Trees of the Year certainly constituted one pandemic family project, but in new Como Las Movies video single "La Inconforme," ATX's half-shuttered urban jungle reveals a cinematic expanse of local muralism. Over the local electro traditionalist's frying cumbia, a DayGlo tour through the capital's Eastside uncovers a beating heart of street art. Like the wicked surf-synth riff at the heart of the song, the visuals bristle. Writes in group leader Nelson Aguilar: "The music video is a collaboration between ATX Barrio Archive (Brown & Black archival content from Austin's historic Eastside) and Como Las Movies, which pays homage to the Eastside's rich cultural history and muralists and visual artists who contributed to that legacy." Dozens of their names scroll at clip's end, so now find their handiwork. – Raoul Hernandez

Black Fret's mission is formally stated as "enabling the creation and performance of new music," but to put it plainly, it's finding ways to put money in musicians' pockets. That's become imperative amid the stageless struggle of 2020, so the patronage-model nonprofit adapted accordingly by slashing annual membership dues in half, quickening artists' access to grant money, and creating a Happy Hour Concert where Austin musicians are well-compensated to perform to business staff on virtual platforms. The organization's banner event, the Black Fret Ball, streams to the public Saturday. Some $160,000 in 20 $8,000 grants will be issued to nominees including Altamesa, Cilantro Boombox, Croy & the Boys, Sam Houston & Blk Odyssy, Alesia Lani, Carrie Rodriguez, and Sir Woman. Free to watch, but consider becoming a member. – Kevin Curtin

Austin jazz/soul quintet Nori stayed quiet following excellent second LP Bruise Blood, but that doesn't mean they haven't been busy. Recorded live in the studio as documented by the video and augmented by a string trio, new single "I See You" lenses grief and isolation. Dedicated to a deceased friend who struggled with addiction and mental illness, the song not only processes bereavement, it also reminds us to reach out to our own loved ones, especially now in the midst of what seems to be an endless pandemic. Wrapped in a light (but not breezy) rhythm and highlighted by a sterling trumpet solo from Erik Telford and perfect vocal from singer Akina Adderley (most recently seen on Austin City Limits backing up Jackie Venson), "I See You" empathizes with anyone who's suffering, and that's exactly the kind of song we need right now. – Michael Toland

As we close out this horrific year, it's simple gestures prompting special joy. Growing out of a spontaneous series of weekly driveway performances for their neighbors, saxophone/flutist Alex Coke and harpist Elaine Barber collaborate on a musical Advent calendar that delivers a daily musical treat to its subscribers via email through Dec. 24. "It was Elaine's idea," boasts Coke about his musical partner. "She came up with it right before Thanksgiving." Principal harpist with the Austin Symphony Orchestra, Barber stays busy seasonally with The Nutcracker, but not this year. Redirecting her creative juices to kick-start this project allowed the pair to collaborate on a variety of musical vignettes, resulting in a various styles thus far, including medieval folk, Duke Ellington, Debussy, Appalachian mountain music, and Stevie Wonder, with a special shout-out to harpist Dorothy Ashby, who played on the Wonder original "If It's Magic." "There are so many possibilities, and the format is very simple," says Coke. "We keep it short so you can download and listen on your phone." – Jay Trachtenberg 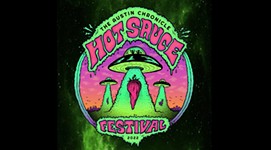