Ley Line Soaks in the Healing Wash of We Saw Blue 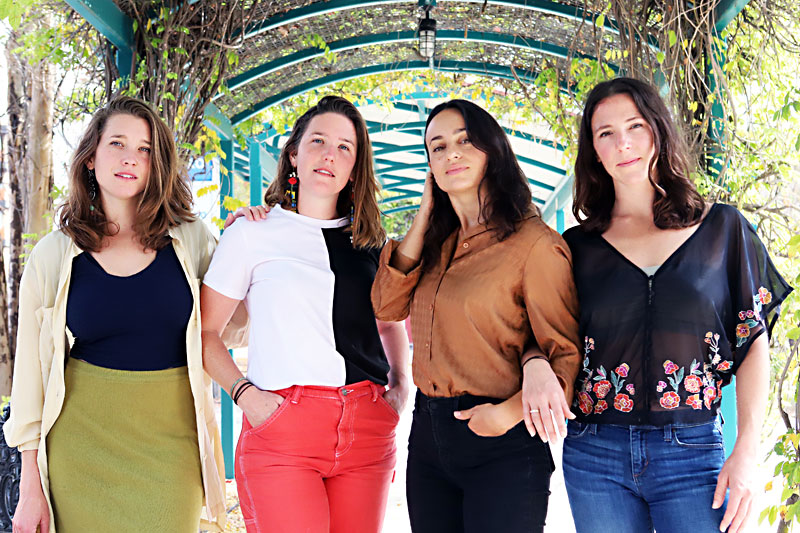 Before each performance, the four women of Ley Line huddle together onstage momentarily to catch their breath, calm down, and reconnect. The group invites audiences into this same circle, opening a space of meditative togetherness with expansive global rhythms and twining harmonies. In fact, the ritual proves essential to the Austin quartet of Kate Robberson, Emilie Basez, and twins Madeleine and Lydia Froncek.

The band, like its music, dances in a play of spontaneity and control, riding waves of serendipity while harnessing the power of four distinct voices. It's an ethos evident in their name, which evokes a spiritual connection to the natural world's deeper pulse.

In a time of isolation and turmoil, Ley Line’s sound soothes with a promise of deeper connection.

"All of us have an individual and a collective story that connects music to spirituality," reflects Madeleine. "So going to natural places and singing to the water, and doing all these things we've done, when we play, I think people can feel that – that deep spiritual connection each of us is having. That's why we're choosing to play music in general, and the songs that we do, because they all hold that depth.

"I think that comes across to a lot of folks. They feel that."

As the masked women posted up at a picnic table outside Texas Coffee Traders on East Fourth a week before Austin reentered COVID-19 lockdown in November, those moments felt distant. Yet Ley Line's sophomore album, We Saw Blue, offers a spiritual reminder, drawing upon their global journeys and finding a collective voice in myriad influences from West Africa, Latin America, American folk, and, most directly, the band's 2017 trek through Brazil.

"In the spirit of collaboration, our songwriting is so much part of our conversations with each other and what we're all going through," offers Robberson. "Instead of shying away from ego, we're all unique because of our egos, but we're all connected because of our spirit, so we find the balance of that within the song, within the harmony and our voices. Not only our voices in speaking, but voice as the manifestation of our being. The fact that we're all so sensitive and tuned in to finding that balance, and continuing the conversation to find that balance, has been integral in our songwriting process."

"Not only just as humans, but as four women together," adds Basez. "There is a lot of competitive nature that's been taught, especially in the United States. We really want our work to be a symbol of what it takes to let your guard down and why you want to write and own your emotions and work. So the art of writing together and playing together was kind of figuring out how to listen to Music, with a capital 'M.' We all have this relationship with Music, but then collectively, how can we all come together and really listen to what She is creating?"

That collaborative impulse distinguishes We Saw Blue from Ley Line's 2016 debut, Field Notes, which essentially formed the band in the studio. Recorded by the late Seth Gibbs, native Austinites Basez and Robberson invited Madeleine to play upright bass and sing harmonies, and she in turn recruited her sister fresh from Senegal to provide percussion. The bond in their harmonies and rhythms struck immediate and obvious.

The quartet allowed for similar serendipities with the new album, taking advantage of a slew of producers enthralled by their sound. In addition to Gibbs, they shared studio time with Michael Ramos, Claudio Ramirez, Paul Price, Michael McLeod, Grant Johnson, and Moses Elias. Coherence in the results proves Ley Line's ability to synthesize influences and allow material to coalesce organically.

"Water is the theme of this album, how it moves around obstacles and with flow, and there is nothing that can stop that," offers Basez. "It hasn't always been easy in the process of this album, but we realized that we actually have what we need in this team to build what we want, and so then with that perspective, the people that really resonated with us have come rather than us seeking them out."

"I think there have been times when we've been resistant to how long it's taken to finish the album, or the changes because everything has been so stretched out," admits Lydia. "But it doesn't matter. The music is going to come out when it needs to come out, and it's been healing for us this entire time, and healing for our audiences, so we trust it's going to reach listeners when they need it. Our songs say that over and over: We are our own medicine and have everything we need to move forward.

"Each song is a mantra of that message."

In a time of isolation and turmoil, Ley Line's sound soothes with a promise of deeper connection. The cross-cultural currents flow with an impulse of our shared humanity and the spiritual necessity of the world around us, music as a communal language and healing balm. The band likewise recognizes the responsibility of respecting the traditions in their influences, seeking to raise appreciation of the shared rhythms rather than appropriation of cultural sounds.

"I think we're all starting to see that American music is world music," proffers Robberson. "We're starting to erase those lines. When you say 'world music,' it's othering, so recognize that American music is a melting pot of influences. We're becoming more aware of our history and having conversations around that, so hopefully that will permeate not only in Americana music, but all kinds of music as people are able to collaborate all over the world."

"It's looking deeply into the roots of music and not taking it for granted as something that's mine or yours," adds Lydia. "It's always been something that's shared and evolved, and bounced back and forth even across oceans. The amazing thing about music is that it really can't be stopped. Like water."

We Saw Blue is available now at www.leylinesound.com. 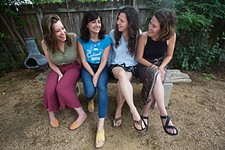