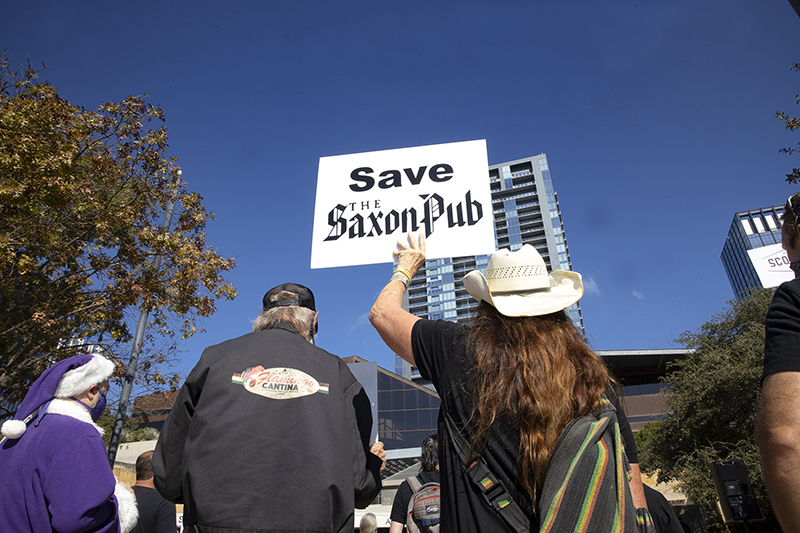 Come and Save It Rally at City Hall on Nov. 19 (Photo by Jana Birchum)

Following rallying by music advocates, city music offices say they're on track to begin rolling out venue relief by the new year. Although applications haven't opened for grants totaling $10 million under the SAVES Resolution, Music & Entertainment Division Manager Erica Shamaly said Monday at the Music Commission meeting that their staff is connecting with third parties to deliver the first round of Live Music Venue Preservation funds.

"We should be making an announcement in the next few days," she said. "[We] will try to get out emergency aid as fast as we possibly can. We're shooting for before the end of the year."

To unlock further funds, music venues must work with racial equity consultant Joyce James on long-term plans for diverse booking, hiring, and outreach. Regarding requirements, Economic Development Director Sylnovia Holt-Rabb added, "What we're doing, period, is unprecedented. The way we have structured this program has not been done in the U.S."

Taking a separate whack at resources, the new Iconic Venue Fund will pull $15 million from hotel occupancy taxes for venues and restaurants. Antone's, Continental Club, Stubb's, Mohawk, Hole in the Wall, and Victory Grill were named eligible in the resolution. A current total of $861,000 spread among some 30 clubs hopes to grow.

"These shows are very high demand with a limited number of tickets, magnified by the decreased capacity for social distancing," Stubb's posted. 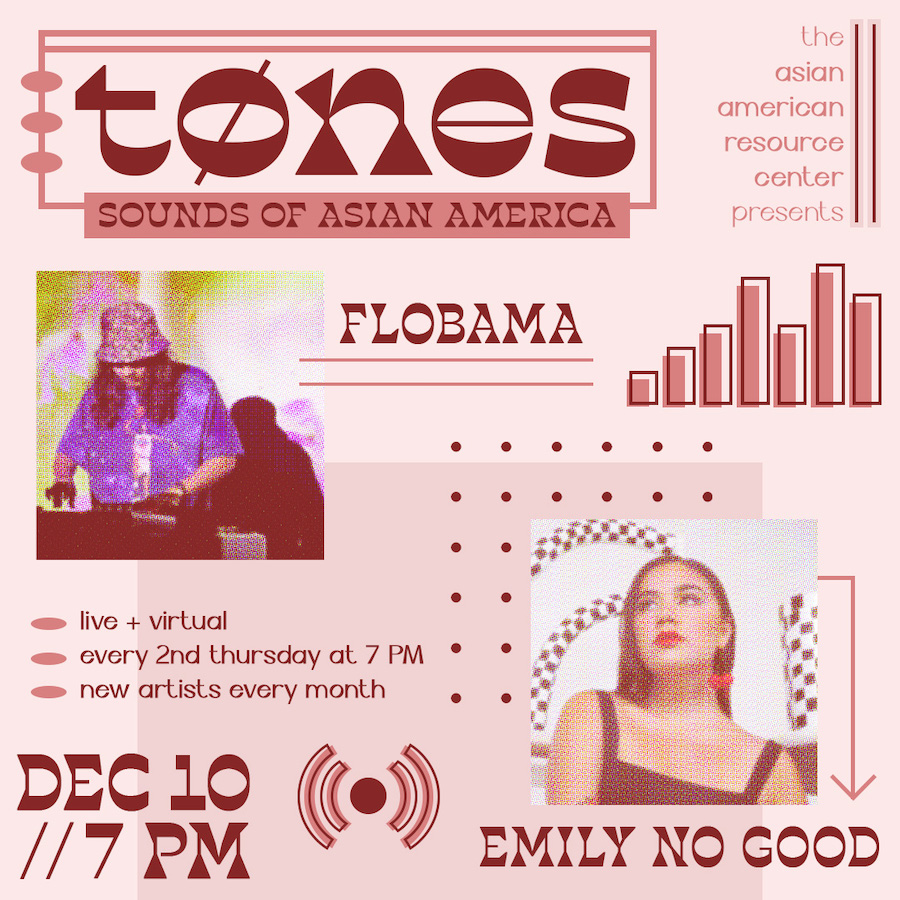 Perfect for 2020, local hip-hop producer Florian Habito oversees a universe of virtual beatmaking under the pseudonym Flobama. Alongside finger drumming and dreamy blends of boom bap, soul, and jazz samples, his YouTube presence remains recognizable for its potted greenery and an IKEA Kallax shelf with LP recommendations.

"People usually comment on my hair, if it's not the plant," admits the long-tressed member of local collective Hermit Kingdom.

The electronic creator livestreams tonight, Dec. 10, on new city-supported series Tones via the Asian American Resource Center's Facebook and the Parks and Recreation Department's YouTube. Emily No Good, the new solo outlet of Nevil lead Emily Ng, joins with ethereal indie rock like latest "Faster." Asian artistry continues the second Thursday of each month with BettySoo and Sho Humphries, and Fared Shafinury and Marlon Hedrick, aka rapper Tåsi, who helped curate the lineup.

Raised in Dallas by a Filipino father and German mother, Habito moved to Austin for film school at UT. His latest upload is Seventies-styled infomercial "Flobama Presents: The Power of Sampling" for Austin's Ruido/Noise sound art gallery.

"I was inspired by the ability to sample any sound and turn it into a beat," he says.

"In high school, I was into old-school guys like A Tribe Called Quest and J Dilla," he explains. "That's where the interest in sample-based beat music comes from. It's a Nineties throwback thing. Tapes are just another part of the nostalgia." 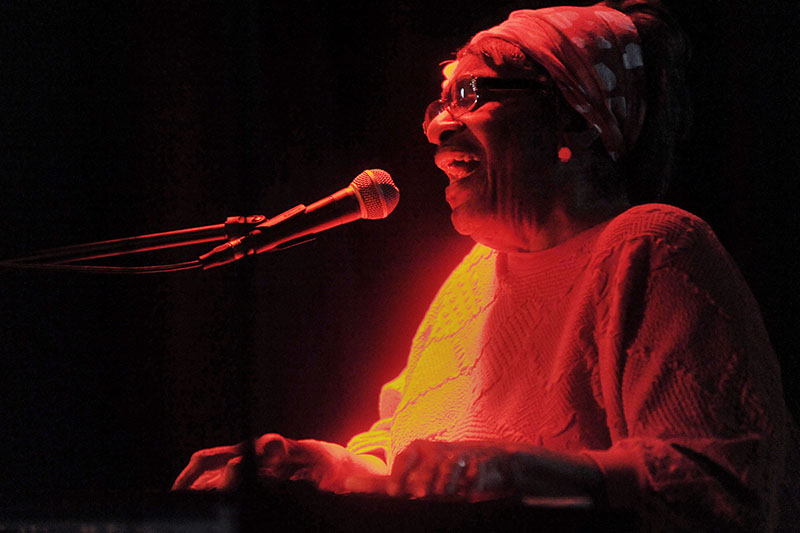 Beloved singer/pianist and resolute East Austinite Margaret Wright died Dec. 6 at age 78. Daughter Joely Wright told the Chronicle her mother went to the hospital with a stomachache Saturday and did not suffer from any prolonged illness or COVID-19. The Austin Music Hall of Fame member became a fixture at the Skylark Lounge beginning in 2013, alongside decades of residencies around town. Read about the extraordinary performer on our Music blog.

Country bard Hal Ketchum died Nov. 23 in his Hill Country home in Fischer near Wimberley. The Grand Ole Opry member, 67, suffered complications from dementia. Born in upstate New York, he settled in New Braunfels during the Eighties, where he became both a performer and carpenter at Gruene Hall. After honing his folk style around Austin, the emotive tenor moved to Nashville to release Nineties country hits like "Small Town Saturday Night" before returning to Texas in 2008.

Health Alliance for Austin Musicians urges locals to sign up for health care as the Dec. 15 deadline approaches. For the first time, the nonprofit enrolls online. Austin's Economic Development Department announced a $500,000 contribution last week, joined by $640,000 from Travis County's Central Health, following a call earlier this year for help with funding gaps.

Jonathan "Chaka" Mahone, half of local hip-hop duo Riders Against the Storm, was unanimously voted Austin Music Commission chair on Monday. The former vice chair steps up after leading efforts like a systemic-racism focused group and Black Live Music Fund. "We have come through a lot in the last year as a group," he said. "I'm seeing more connections and willingness to work on very difficult topics. I'm excited to continue that work, and I hope to dig in a little deeper."

The Moody Center, the under-construction Frank Erwin Center replacement due 2022, Oak View Group principles Jeff Nickler and Casey Sparks as leads. The incoming Austin residents opened similar arena the BOK Center in Tulsa. According to Pollstar, "Live Nation has an equity stake in the Austin project, but Nickler stressed that Moody Center is available to all promoters." 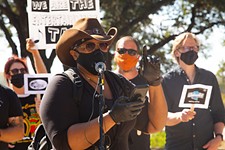