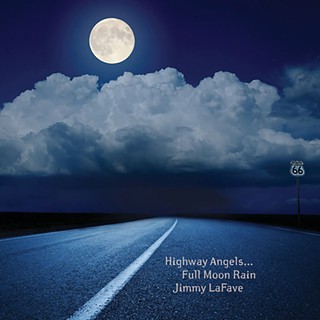 Ever have a dream where one of the dearly departed is alive and well, and maybe even pretending the two of you aren't meeting up on a different plane than the one you're sleeping in?

Recorded locally in 1987/88, according to album materials, the original cassette won Best Tape in the latter year's Austin Music Poll. This many moons later on CD, it sounds better than winter rehydration. Opener "Deep South 61 Delta Highway Blues" peels out onto the blacktop as if Jimmy LaFave's death in 2017 from sarcoma had only been a sweat-soaked nightmare, the song's hard, raw, early-Dylan acoustic clip rambling up the road apiece to a place where the mythic earthbound thoroughfare leads straight into the Promised Land.

Before you can catch your breath, "Minstrel Boy Howling at the Moon" gets slightly Tangled Up in Blue, Beth Galiger's flute swaddling the singer's tender tenor in even more cushion. That vocal flashback exerts a powerful gut reaction to a posthumous dust-off worth its weight in master tapes. Big, beautiful, blue raindrops from "The Price of Love" splash down on those same steel strings, glistening with a crystal-clear vocal and matching recording akin to the clouds parting to reveal our planet's celestial satellite.

The roots randy "Red Dirt Roads at Night" bristles and strums, while Carey Kemper's rich mandolin whirl gives flight to "One Angel Is You." Circling back to the beginning, "Thru the Neon Night" chugs down the same midnight interstate, and the low, gritty soul of "Rt. 66 One More Time" keeps its steel-point boots on the gas and eyes on the horizon. At a point in time when the right to roam interstates and back hollers weighs heavily against public safety, this Highway Angel rides like the wind.

Closing prayer "The Loneliness of America" speaks to 2020 with a salve many have grown unaccustomed to: hope and universality. – Raoul Hernandez

"When you're the best, you do things with style." So intones the voiceover opening a trailer to Lone Wolf McQuade, a 1983 B-movie starring Chuck Norris as a Texas Ranger who, in one memorable scene, gets buried alive in his SUV, then pours a beer on his own head and drives out from under a mountain of dirt. Austin's connoisseur dub producer Carson Hoovestol, aka McPullish, frequently splices his original riddims with vocalists including General Smiley and Tippa Irie or musical collaborators like Twilight Circus, but the eight-track Lone Wolf McDub focuses solo. Superior drum sound and enchanting leads like the cinematic melodica on "High and Lonesome" and exotic lute riff from "Hero Rides Again" abound. Meanwhile, the Charlie Records slinger mines exceptional variety by focusing on a single channel – the shaker in "Eastern Passage" or wah-wah sound on "Where's Slim?" – and letting his bold mixing moves fill out the sonic trip. – Kevin Curtin

Second cassette release of the year, this week's Sanctified propels Tommy Jammer into the ether of multipartite electronic bliss, brushing off minimalist tags in favor of lush synth work and a breadth of genre experimentation at once modern and recalling mercurial works of early explorers like Laurie Spiegel. Opener "Sleep" surrounds its creator's dulcet vocals with a gently flowing bass rhythm and twinkling effervescence. Harnessing the "Strength of the Sun," spoken-word lyricism permeates a full-bodied beat loop, modulating hypnotically into "Wicked," which employs its two-and-a-half minutes of wordless dark ambience as a segue into lead single "Crush" (revisit "PL-ATX," Nov. 6). "Connected" flexes club influences in an unabated four-on-the-floor house bop, the longest composition on the release at over six minutes, yet still deserving of an extended mix. The beatific "Moon in Cancer" brings the EP full circle to a close, softly imbuing R&B-laced electro-pop in union with tempered vox. Copies of the limited-edition tape available through the local Growth in Decay imprint. – Greg Stitt

"The Monday night is unusual," says Conspirare's Ann McNair, "but it's become a tradition we decided to keep in this year of so many changes." Changes, indeed – but, here, not necessarily for the worse. Instead of one guest artist for the annual holiday concert this year, there'll be a plurality of talents joining Craig Hella Johnson for "songs that go deep with love, courage, and hope," featuring a choir of Gitanjali Mathur, Shari Alise Wilson, Mela Sarajane Dailey, Laura Mercado-Wright, Rick Gabrillo, Tim O'Brien, and Robert Harlan. This virtual showcase, an uplifting soundtrack for putting 2020 in your rearview, includes archival footage from San Antonio's Tobin Center and a carol sing-along with members of the Dallas Street Choir, African Children's Choir, and Conspirare Symphonic Choir. It'll be available for 30 days after the premiere, but – bonus! – the debut boasts a live chat with the performing artists. – Wayne Alan Brenner

Whether chugging crumbs from the bottom of a bag of Cool Ranch Doritos or crunching some elegant kettle-cooked crisps, a heightened state of snacking prevails these days. Latest LP from Flint-raised, Dallas-based beatmaker Nameless, Chips captures the zeitgeist of processed potatoes over 18 fast-moving tracks. Throughout, the anonymous producer dusts a sour cream-n-onion combo of classic boom-bap and inventive rhythms epitomized by the flamin'-hot bass pad work of "Aisle 5." The House Shoes affiliate's appetite for spoken samples yields both levity and surprising wisdom, with the "Pringle's" soliloquy equating snacks to stacking wealth. Via Austin's Insect Records, Chips arrives on a mouthwatering picture disk, accompanied by one-of-a-kind swag: a custom chip clip to keep your stash freshly sealed. – Kevin Curtin

Micah Wagner sets the scene for his sophomore album at the outset with "Dobro on the Front Porch in the Rain," a gorgeous strum against the backdrop of a thunderstorm and howling hounds that rolls into the gentle hum of "Wolves & Dogs." Core to the native Austinite's sound is his mellow high tenor, pitching with ache on "Tonight (I'll Come Clean)" and the title cut. The producer sets his yearning against a bed of South/Western atmospherics, grasping for strength as he ponders the fallout from addiction. Touches of English indie folkers like Ben Howard and Benjamin Francis Leftwich shade his soft reckonings that build into the explosive surge of LP closer "What's Next." – Doug Freeman

If you've grown numb to the two-dimensional universe of livestreams, Toxic Water's Sunday Service will shake your brain. The most imaginative online performance emerging from ATX 2020, last week's afternoon broadcast plugged viewers into the warped world of the industrial post-punk duo. Richard Smith (Crust, Miracle Room) and Jessica Sopolis (Bipolar Gentlemen) appeared pantsless and performed for 40 minutes amid overlaid visuals, with each song existing as an individual trip. In one, they played their doom groove over surgery footage, then held each other as they seemingly traveled through a quarantined hospital wing. In others, the experimental instrument hammerer and malevolent chanteuse had dance parties and killed each other. The series scratches the itch for live music ... and a haunted house. – Kevin Curtin

Sour Bridges: Roll Us Up Something Good

Sour Bridges cut their strings wildly eclectic, making the Austin quartet's live energy difficult to translate on an album. The band's three-shot Roll Us Up Something Good leans back easy, though, finding a perfect rolling rhythm that allows their ballads to shine. "Merita's Tune (Riverboat Man)" churns a weary working man's tune, plugging away behind fiddle and pedal steel, and "Evelyn's" bounces a sing-along chorus worthy of the Band. Meanwhile, the title track swirls with a touch of Texas Tornados. By easing off the gas and letting the songs flow naturally, Sour Bridges hits a sweet spot. – Doug Freeman

Townes Van Zandt: Somebody Had to Write It

Austin's natural springs produce life-giving song founts: Willie Nelson, Roky Erickson, Daniel Johnston, Britt Daniel. Even so, consider it no mere tissue-paper hyperbole to muse that perhaps Townes Van Zandt (1944-1997) remains the greatest. Lean, razor-sharp, full of deadeye wisdom and gorgeous poetry – Lightnin' Hopkins' folk-blues pulsing through like crimson – describes both the songs and their native Texan composer. He didn't need a band to underline them either. All either required was an acoustic guitar and that weathered, lived-in voice. A pair of Nineties CD post-mortems (Documentary and Last Rights) finally vinylized, the newly waxed Somebody Had to Write It collates prime TVZ solo before either a small audience or alone at Terra Nova Mastering. Orange vinyl scans like a "Best Of": "Waitin' Around to Die," "Tecumseh Valley," and everyone's favorite, "Pancho & Lefty." It's a knife to the heart you welcome, because the pain still feels so exquisite. Digital bonus: Interview excerpts with friend Larry Monroe talking songwriting philosophy. It approximates an intimate audio autobiography, and you're the audience. – Tim Stegall