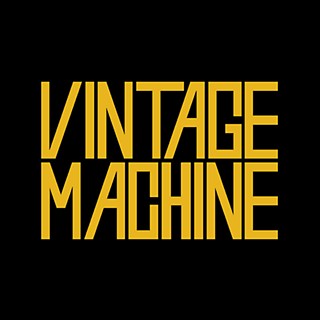 Jackie Venson's 2020 solidifies her stake within the upper echelon of the Texas capital's storied music scene. The Northeast Austin native impactfully employed her voice to curate an all-Black bill for Blues on the Screen in July and followed that up last month by making her international television debut on Austin City Limits.

Vintage Machine follows two popular volumes of "Jackie the Robot," a studio pivot that found the former blues ensemble leader splicing 'n' dicing her material into a distinctly digital and digitized format. This 33-minute drop employs a more concrete structure, but its circuitry springs from the same paradigm: Venson's need to cut tour costs in 2019, a streamlining that changed her approach to live performance to that of a DJ rearranging songs and sound. Her third studio album features the classically trained Berklee alum on keyboards and a sampler in addition to trademark offerings of electric guitar and microphone.

Vintage Machine thus represents her most futuristic, vibe-filled effort to date. Each song carries its own message of self-possession during a time of isolation ("Make Me Feel," "Go My Way," "Surrender"). That stands in contrast to last year's comprehensive and full-on breakout blues/pop/rock guide to achieving Joy. Though songcraft here erodes somewhat from that early high-water mark, these eight tracks carry palpable sentiment.

Dedicated to her locally gigging musician father, "Awake" opens the album plaintively: "Papa don't worry, I will make it/ Papa, I was born with your dreams/ All I remember is a star shining and how much I needed to shine too." Autobiographically plain, sure, but hearing Rodney Hyder, formerly a bandmate of Andrew Venson's in Blue Mist, methodically work drums in tandem with stellar riff work from Jackie paints a picture of generational cycles intersecting. Hyder, a frequent concert collaborator of the younger Venson, keeps an Austin-poppin' beat throughout the long-player.

Upbeat, Joy-esque "Home" pays tribute to where she lays her curls, while certified bop "Lofi" dispels stress with hypnotizing synths and jiving tambourines. Joy served up a full helping of delight last year, but its successor marks a welcome shift. Rather than the lark of the Jackie the Robot project, Vintage Machine feels like the future. – Derek Udensi

HOME Cookin' for the Holidays

Jimmie Vaughan: The Pleasure's All Mine – The Complete Blues, Ballads & Favorites Sessions

In 2010, Austin's prime Stratoblaster Jimmie Vaughan recorded the Great American Blues Songbook, his idea of the genre encompassing both Jimmy Reed and Jimmie Rodgers. Upon corralling his local cast and crew, including the sublime Lou Ann Barton, into Top Hat and Wire Studios to track two volumes of Blues, Ballads and Favorites, everything from Dale and Grace's "I'm Leaving It Up to You" and Kay Starr's "Wheel of Fortune" to Charlie Rich's "Lonely Weekends" got transformed into a proper Texas shuffle. Both volumes finally combine into either a 2-CD or triple-LP set. As tasty as Vaughan's juicy fret-busting is the vintage production. Soup to nuts, it all sounds like a vintage Chess or Specialty mono 45, the sound of a smokin' live band in one room, caught by tube microphones on a single-track tape deck. – Tim Stegall

Like his brother Ben, Galen Ballinger spent the past few years splitting time between Austin and the Northwest, but enough locally to record his debut LP with Jonas Wilson for the Bastrop kingpin's Mr. Pink Records. At times brutally dark and dire, Ballinger's songs spew with hard, honed catharsis in a quaking voice and sparse, searing guitar. The balladeer broods with a Nick Cave intensity across eight cuts, "Rabbit in the Moon" and "Naked in the City" burning with provocative cryptic images and haunting tones. Yet there's a soft beauty underlying the dark currents, searching and wantful. The Ballinger boys continue to carve their own unique songwriting mythos. – Doug Freeman

Samoan American Moana Tela has no desire to silo ascending talent into any particular genre, an idea furthered in her latest single, the RJ Maine-produced "Searching 4 Me." As she explains, "Sometimes I feel the beat, and I start rapping; other times I go off singing." The loose track lives unsettled, teetering genres, beginning as a breezy pop/R&B number reminiscent of feel-good early Aughts glories of a Baby Bash or Ashanti, that flips into her competent talents as an MC. The song's principal feature is its sly, chameleonic ability to spotlight Moana as a rising everywoman. – Kahron Spearman

JT Whitfield wields a dab hand at industrial electronics for the better part of a decade now, committing to tape his own formulation of mechanized beats awash with rhythmic noise walls and unpolished ambience for labels around the world. Owsley Sheet, released on Halloween through Houston's Black Porno Cassette, captures the Austinite composing slow, throbbing cyberpunk techno recalling the iconic Tetsuo soundtrack through a haze of codeine. Running under 20 minutes, the four-track EP processes intermittent vocal distortion and gnarled effects over a continuous groove throughout, begging for maximum-volume headphone playback. In June, Whitfield collaborated with local underground industrial contemporary Shane English on a project called Closed City, churning out a vinyl-only bow conceptualized around the secret Russian postwar city of Krasnoyarsk-26. – Greg Stitt

Grassy Knoll composer Nolan Green allows so much time to elapse between projects that it's easy to forget his instrumental eclecticism still thrives locally. Surprise pandemic drop EP01 arrives a lifetime after 2014's Electric Verdeland Vol. 1. Green's tracks have a hermetic feel, like music created in a void free of outside influence. Featuring My Jerusalem's Jeff Klein on vocals, "There's a Place in Hell Where My Nightmares Dwell" mixes psychedelic washes of guitar with throbbing drums and flugelhorn improv. An instrumental mix of "Into Your Mind" from Electric Verdeland allows free-skronking sax to interrupt its growling groove, while "Dead Rivers and Smokey Skies" evokes a rain-soaked urban midnight. KUTX's Laurie Gallardo graces the obsessive "Reading My Furious Mind" with a sensual but menacing croon. Given four perfectly executed songs, we hope the title fulfills its promise of more to come. – Michael Toland

Producer Don Falcone's long-running Spirits Burning plays Red Rover with diverse musicians drawn from space rock, progressive rock, folk rock, and psychedelia. The band's 15th album, The Hollow Lands, is also the second collaboration with British science-fiction legend and Bastrop resident Michael Moorcock, following 2018's An Alien Heat. Like its predecessor, The Hollow Lands adapts a book from the author's celebrated trilogy, The Dancers at the End of Time. Given Moorcock's direct participation, including narration and, on the funky "Dance Through Time," singing, the songs follow the book closely, though only those who've read it will get the nuances. Behind an eye-opening roundup of guests, including members of Hawkwind, Nektar, Camper Van Beethoven, the Dictators, and Blue Öyster Cult, The Hollow Lands rides a wave of tasteful, melodic prog just spacey enough to qualify as a pleasant trip. – Michael Toland

Seventh LP since 2004, The Golden Age of Black Magick casts another classic metal whammy from the Austin fivepiece: veteran Dangerous Toys/Watchtower shriek Jason McMaster, guitarists Stuart Lawrence (Agony Column) and Robert Williams, then Billy Dansfiell and Pat Doyle (Offenders) in the engine room. McMaster's sac-shriveling vocal edge continues to sand down smoothly into a lower register, which, when he pauses into an almost spoken word passage on initial highlight "Countess Apollyon," chills pleasingly. Here, here – more. Lou Reed's The Raven practically dive-bombed metal anyway. McMaster's inner Bruce Dickinson emerges in that moment and Priest/Maiden romp "Hell Shall Be Your Home" rips British heavy metal in all its Seventies/Eighties glory. "Tonight We Ride" could be a vintage cover, its compositional twists and hooks sticking like a pike, while "Steel Flesh Bone" obliges next at an even sleeker tempo and six-string sync. Closer "Stoned at the Acropolis" slays on title alone. – Raoul Hernandez

Although the Weary Boys officially disbanded well over a decade ago, their not-infrequent reunion shows keep the raucous spirit of the high stringers alive. Likewise, the Austin quintet's virtual gatherings on Zoom during the shutdown remain a rare positive of 2020. The powerhouse players restart their Holy Ghost Power Hour for December, strumming some old favorites, ribald covers, and fresh new tunes through all the laughs from Darren Hoff, Mario Matteoli, Cary Ozanian, Darren Sluyter, and Brian Salvi. Expect unexpected like-minded country punks like Jeff Pinkus to pop in for plug, too. – Doug Freeman