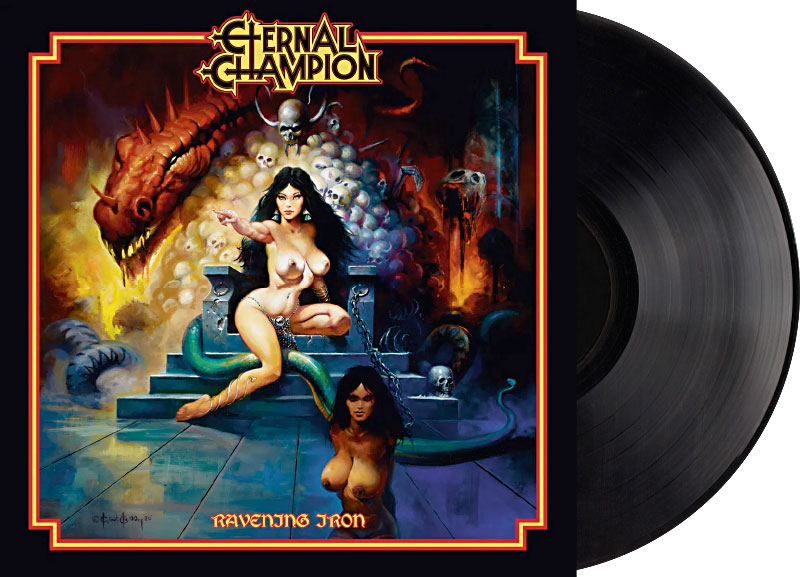 Grand but rough, the realm bustles with strapping warriors, malevolent sorcerers, strange cults, dangerous women, and elder gods of fragile sanity. Created by Wimberley singer/blacksmith Jason Tarpey essentially as tribute to Robert E. Howard/Michael Moorcock's sword and sorcery and H.P. Lovecraft's existential horror oeuvre, tales of Arginor have been told in print and through music thanks to Tarpey's bands Iron Age, whose seminal 2009 album The Sleeping Eye first shone a light on this dark world, and Eternal Champion.

Ravening Iron continues a narrative begun on debut LP The Armor of Ire, this time with its creator's accompanying novel The Godblade, which picks up from his story "Vengeance of the Insane God" in the anthology Swords of Steel. Within that outlandish conceptual framework, its galloping rhythms and sweeping melodies could tip into kitsch, but they never whiff of it. Thank the group's restraint, a term not usually associated with epic power metal.

Guitarists Blake Ibanez (Power Trip) and John Powers stick close to the riffs and melodies, adding filigree only when necessary, and drummer/producer Arthur Rizk keeps the beat like a metronome, regardless of time signature. Tarpey's midrange rasp avoids excess of any kind, giving his most fantastical flights of lyrical fancy an earthy tone that grounds them. An expertise in Arginorian mythology or even a basic grounding in warrior fantasy isn't required for the axe-waving "Worms of the Earth" and doom-laden "Skullseeker" to get the blood pumping, or for "Banners of Arhai" to close the album on a triumphant note.

Eternal Champion's ambitious multimedia reach remains rewarding, but Ravening Iron nevertheless boils down to the central question for any concept album: Does it hold up without the central conceit? As surely as a map of Arginor hangs in Jason Tarpey's man cave, yes. – Michael Toland

Last October, Austin artists Christelle Bofale, Vonne, and Kendra Sells (BluMoon) convened at Mohawk for a sold-out enchantment, exactly the kind it hurts to look back on now. The three vocalists shared the indoor stage for Roberta Flack's "Feel Like Makin' Love" to close. On virtual platform Baby TV, the trio realigns with Illinois poet and songwriter Kara Jackson. Get ready with Bofale's follow-up to debut Swim Team, the longing "Miles," and Vonne's new piano meditation "Elders?" on Bandcamp. A newly solo Sells experiments with "All in Your Head" on Quiet Year Records. Show proceeds split among artists, Baby's All Right staff, and local director Funmi Ogunro. – Rachel Rascoe

Chris Bosh, 36, enjoyed heaps of success during his basketball career. The towering former power forward's Hall of Fame-worthy résumé includes two NBA championships and an astonishing 11 consecutive All-Star selections, but he's decided to pick up his pivot. The Dallas native moved to Austin in 2018 after retiring and has since pursued making an imprint in music. The former Miami Heat superstar throws a well-weighted alley-oop to Deezie Brown during the aspiring beatmaker's first dealings. Snare-heavy debut "I Want It All," released on Oct. 2, pays homage to the late Kobe Bryant: "We ain't playing 21 no more, we playing 24/ Twenty-four hours round the shot clock, fade away/ Still yelling Kobe on the day-to-day," rhymes Brown in reference to Bryant's jersey number and signature move. Oct. 30 follow-up single "Imitate" takes aim at racial inequality: "Freedom's calling, it's about time you call me back/ Matter of fact, I've been expecting your parade because, they're flaunting your charisma while the rest of us enslaved," the young Bastrop spitter offers. – Derek Udensi


Njune: I Hope You're Happy

Omaha-born multidisciplinary Austinite Adrian Armstrong (Njune) remains hopeful in his pursuit of happiness. While technically a "rap" album, I Hope You're Happy blends influences, textures, and lyrical imagery in a reconstructive and jazzy extended play that's movable, even fluid. "The record is about the ups and downs of the pursuit of happiness, and also wishing happiness on others," writes Armstrong. "It was meaningful to express myself, as well as get testimonies from others on what makes them happy." Self-produced, with a mixing assist by Kollin Reynolds on three of the tracks, Armstrong cuts right to the point, admitting he doesn't know the answers. In a punchy reimagination of Sade classic "Cherish the Day," he says he wants to "create with no limits... love with no limits." – Kahron Spearman

Premiering the weekend before Election Day, "Private Hell" descends into romantic drama with the immediacy of a red velvet curtain pulled forcefully across a stage. Founder of the political advocacy group Austin Texas Musicians, its tenor sets a digital noir beat against his heated, analog larynx. Voice hanging in the recording as thickly as the video's barroom scenes, Nakia Reynoso materializes to the point you can feel the breath and emotion swell through his upper torso, its melodrama rich with roots authenticity and Southern depth. "I self-produced and released both the song and the video in less than 48 hours," announced The Voice alum. "Since COVID-19 makes directing videos hard, I created it entirely out of licensed stock footage to tell the dark story of a tortured soul slowly going mad." – Raoul Hernandez

Having signed to historic indie label Kill Rock Stars, home to breakout records by Elliott Smith, the Decemberists, and Sleater-Kinney, you can't help feel that Lockhart duo Natalie Ribbons and Jason Chronis have built toward this moment despite not issuing an album since 2016's enchanting House of Souls. Anchored by a brisk nylon-string guitar waltz, second prerelease single "Words That Stay" positions Ribbons' eerily dignified vocals into a missive to a socially transient friend that's vanished out of her life, singing, "You can't be strong when there's no gravity/ Floating like pollen, you'll land where you will." The video showcases the couple's affinity for the vintage – 17th century – as they play hide-and-seek in powdered wigs. – Kevin Curtin


Trashdog: Sittin on My Head

Recovered from the failed presidential plan laid out with "Trash/Dog 2020" on last December's Dipshitticus, lo-fi punk Andrew Jackson issues tertiary Trashdog bow Sittin on My Head as his DIY label Digital Hotdogs crests into year seven of home-dubbed cassettes and web singles. At 16 tracks, the EP's 26 minutes boil down to an essence the tongue-in-cheek antics that make his output such an entertaining cornucopia of styles. "Lost My Skunk" shreds with all the excess of the Sunset Strip, "Worm Out" wriggles with noise-punk and vocal effects, "Court of Roy" embraces glam rock power chords, "My Dog Lickin His Nutsack" goes full-bore cowpunk, and "Devil's Lettuce" riffs and spliffs from Eagles to noise rock on a dime. The label's Bandcamp features a permanent pay-what-you-want option for their digital discography, currently sitting at 72 multigenre offerings of hyperlocal binary meatstuffs. – Greg Stitt


Al Shire, "Nothing but Love in Brewster County"

Brewster County, where the rugged Chihuahuan Desert meets the monolithic Big Bend and colorful ghost town of Terlingua, either terrifies you or feels like home. The latter's true for Al Shire, the heavily tatted Austin singer/guitarist known for fronting a namesake punk band as well as ska outfit the Inverters, pulling listeners into a West Texas orbit with new single "Nothing but Love in Brewster County." Spiked with fiddle and piano, its country turn finds Shire sounding like a streetwise rocker finding peace in a slow place on a track that wouldn't feel out of place on Mike Ness' Cheating at Solitaire. Sunbaked Terlingua dwellers will raise a glass for local references: drinking beer at the High Sierra and crashing at the El Dorado. – Kevin Curtin


The Songs I Left Behind: A Tribute to Billy Joe Shaver

Lawn at the Long Center, Sunday 22

Billy Joe Shaver's songs fueled the early outlaw movement, shocking country music in the Seventies with a hardscrabble Texas authenticity on Waylon Jennings' ground-zero release Honky Tonk Heroes. Only proper, then, that the Waco songwriter, who passed away last month, gets a proper Lone Star send-off from Willie Nelson's Luck Presents crew. Charlie Sexton plays bandleader to Shaver's indomitable songbook and influence among the participants: Ray Benson, Dale Watson, Shakey Graves, and Bruce Robison and Kelly Willis. Keep an eye on the Luck roster of special guests, too. "I'm gonna live forever," the born-again balladeer famously sang with his characteristic mix of no-nonsense bravado and eternal humility, though just as important to heed is Shaver's frequent call from the stage: "God loves ya when you dance!" – Doug Freeman 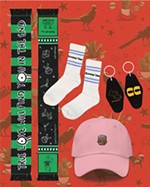