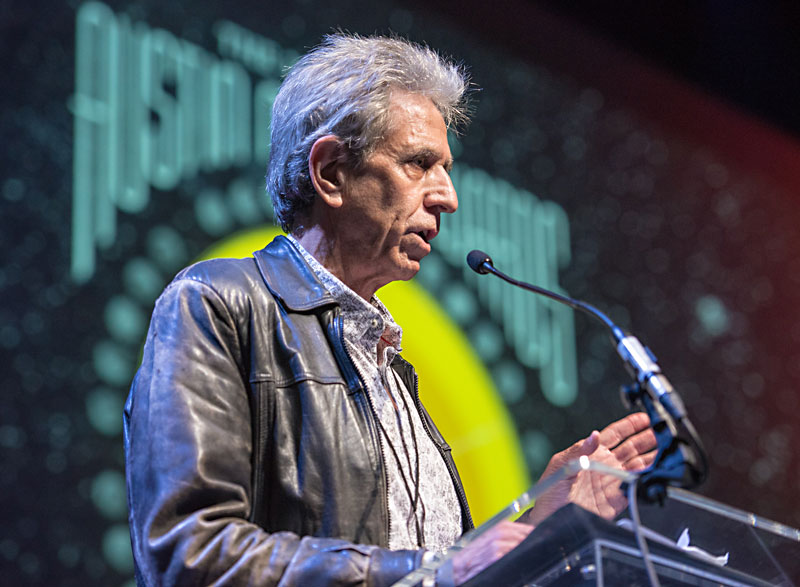 In 1998, "The Men of KUT" – Jay Trachtenberg, John Aielli, Larry Monroe, and Paul Ray – graced the cover of the Chronicle after having been professionally groomed and outfitted. Sly smiles reveal the glee of deejays who did not actually wear suits and ties to their day job. The cover package called them pillars of the University of Texas frequency, which had just begun internet broadcasts and spun off music frequency KUTX in 2013.

The retirement of Trachtenberg, announced last week, marks the end of a foundational era at the proudly noncommercial station. Aielli stepped down earlier this year after suffering a stroke (the Eklektikos eclectic is doing just fine at home), Blue Monday voice Monroe passed in 2014, and Austin lost Twine Time standard Ray in 2016. 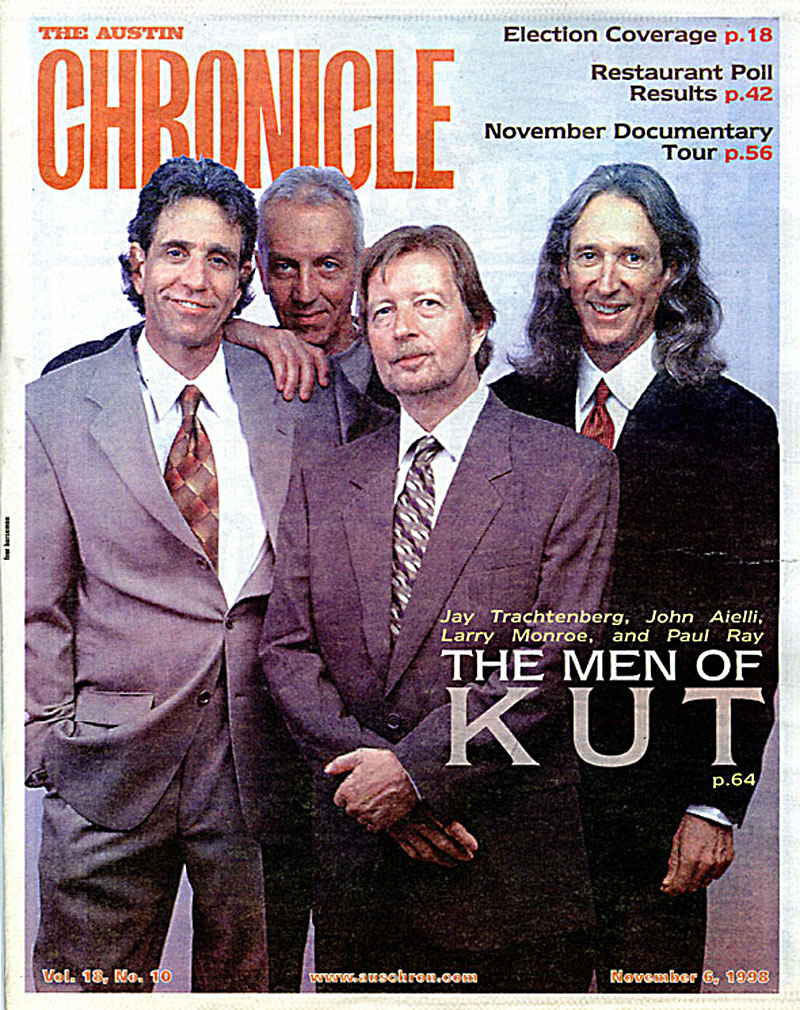 Trachtenberg still hosts Sunday Morning Jazz on the station, 7-10am, but now "The Women of KUTX" dominate most days. Taylor Wallace-Riegel took over for Aielli, while Susan Castle and Laurie Gallardo fill out weekdays before Jody Denberg mans rush hour. Also 21st century, Andrew Brown's electronic spotlight on Soundfounder promotes to Wednesdays at 8pm, while Aaron "Fresh" Knight of hip-hop show The Breaks gains his own hours, Mondays at 8pm and Saturday mornings.

Arriving in Austin for graduate school in 1978, Trachtenberg dropped off a demo tape at KUT the very next day. With no space at the campus station, he instead launched his trademark Jazz Etc. on KAZI. In the meantime, he connected with Chronicle founders at The Daily Texan and has written here since our first year, 1981.

KUT didn't come calling until 1985, when he hauled two armfuls of Miles Davis LPs through the snow to air from midnight to 5am, a slot he sustained for the next decade. He eventually landed on the noon-2pm spot Mon.-Thu. as the calming voice of musical wisdom. Fellow on-air KUTX host Jeff McCord, who wrote a moving tribute to his friend on the station's website, prompted Trachtenberg to recall one particular studio interview with Jesse Colin Young, who strummed his song "Get Together," as in, "Come on, people now/ Smile on your brother."

"And all of a sudden I flashback to 1969," recalled Trachtenberg. "A huge Vietnam War march in San Francisco ... [with] a half a million people in the park and the Youngbloods come on and they sing that song. And here I am, 35 years later, and he's singing it to me. Sitting 10 feet away from me. It was surreal. 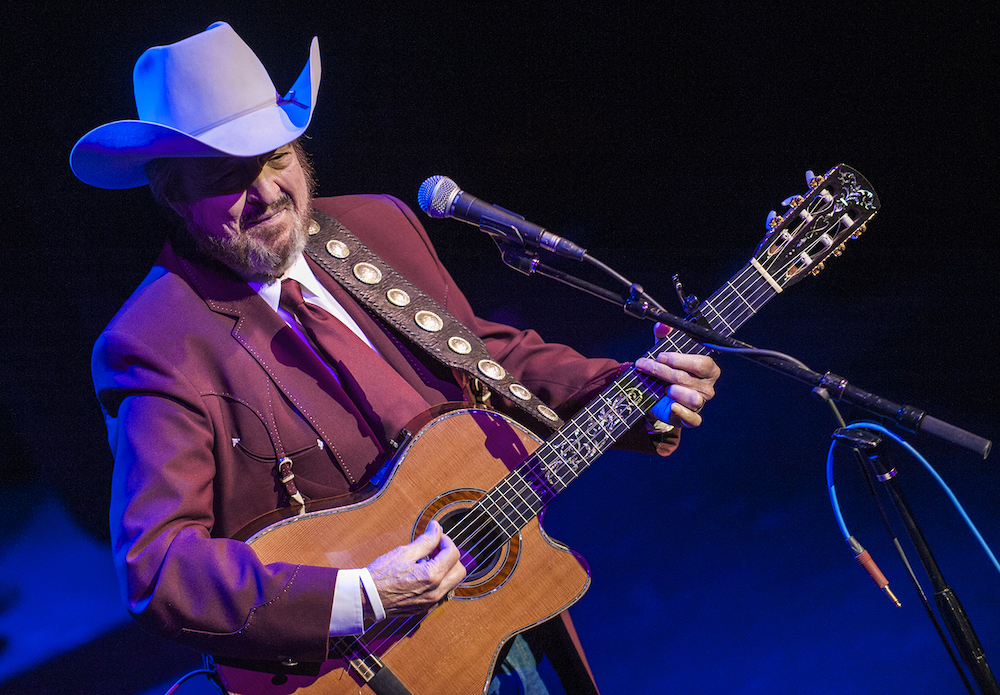 Those words, which kick off every Willie Nelson show, originated with heartache aficionado Johnny Bush. The Texas Country Music Hall of Famer, 85, died Oct. 16 in San Antonio. Born John Bush Shinn III in Houston, the aspiring artist moved to the Alamo City as a teen, where an announcer at the Texas Star Inn dubbed him Johnny Bush.

Before launching solo, Bush drummed with the Mission City Playboys and played with lifelong friend Nelson in Ray Price's band, the Cherokee Cowboys. He charted with renditions of Nelson's "What a Way to Live" and Marty Robbins' "You Gave Me a Mountain" before the 1972 success of his "Whiskey River." Chronicle writer Jim Caligiuri profiled the singer for the release of his 2007 autobiography:

"Lyrically, he perfected blending the here and now of everyday occurrences with fiddle, pedal steel, and that shuffle beat at the heart of Texas honky-tonk. Glimpsed through the prism of his songs, Bush lived what he wrote (which may explain his current fourth marriage), so the emotions were plain and to the bone. The cherry on top was his remarkable voice."

In the Seventies, the "Country Caruso" developed vocal problems, limiting his famed range. Eventually, doctors diagnosed the rare disorder spasmodic dysphonia, and after treatment, he continued to perform. Bush crooned on "Say It Simply" by locals Mike & the Moonpies earlier this year.

"Johnny has been a huge influence on us and the music we make," wrote the group on social media. "He is a legend."

The Nov. 2 meeting of the Austin Music Commission, sparsely attended due to the election, proved Chair Rick Carney's last. The group will vote on a new chair next month. In 2016, the punk rock singer/guitarist with no previous civic experience joined the AMC when a rep seat opened up in District 2.

Carney steps down due to responsibilities at School of Rock. As national manager of music education with the nationwide franchise, he's scrambled to get lessons rolling virtually for students across the country. No longer the even-keeled meeting moderator, Carney responded to a poll about the many efforts lodged at local music in four years.

Carney mentions creation of the $12 million Creative Space Bond and Live Music Fund, both in the works for distribution. For pandemic response, he cites the Austin Music Disaster Relief Fund.

"That was unprecedented. The city never had a program that gave money directly to musicians. We're very proud of that, even though we know that it was just a drop in the bucket."

The long-sought Agent of Change principle, which would protect music venues from noise disputes with developers.

"It has to be codified to have some teeth. CodeNEXT was the point where it fell off the table. That's always been a frustration of mine. We've talked about it from the first day I came on the commission, not long after the Mayor's omnibus study. Now, it's even more important."

"As the clock ticks, the need is greater and greater. We have to start moving to try to keep as many venues afloat as possible. The thought of an Austin with half as many venues is just not acceptable to me, having lived and played music here since the mid-Eighties. There's a huge responsibility to repair and restore the musical culture the city has." 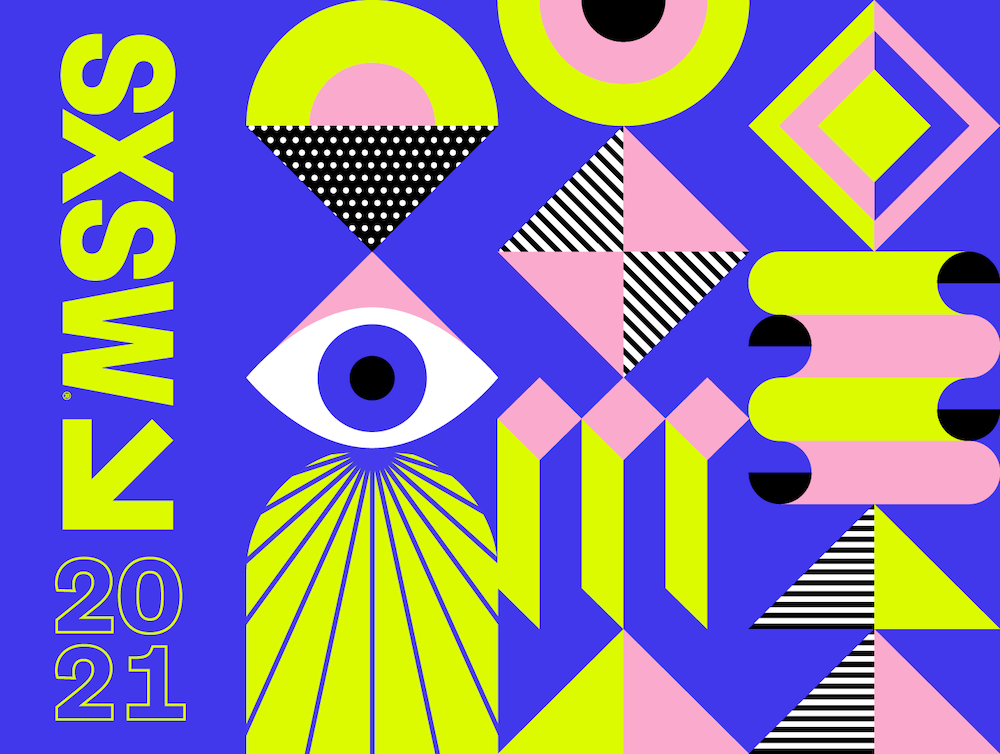 SXSW Online opened registration for the 2021 event, promising virtual music showcases and more for March 16-20. Last month, musicians booked for this year's canceled fest received invitations to apply. Applications aren't open to the public. The email clarified: "It is simply not possible to showcase the 1,800-2,000 artists we typically have ... With that in mind, we will be looking for especially compelling stories and reasons for an artist to command one of these limited opportunities." www.sxsw.com.

Tax incentives for commercial landlords could help the vulnerable sectors of Austin music venues, restaurants, bars, and child care centers as targeted last month in the SAVES Resolution. Under the proposal, land owners renegotiating leases and reducing rent for small-business tenants would receive property tax reimbursements. New leases must extend for at least a year. Despite plans to vote last week, city staff requested more time to refine the program, pushing a vote to Dec. 3. 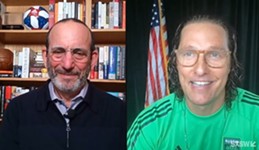 MLS Boss to Matthew McConaughey: We Want Austin FC at the “Front Porch” for the League
Commissioner, ATXFC co-owner outline the future of soccer 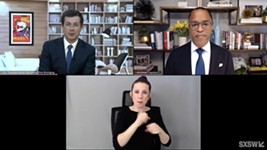