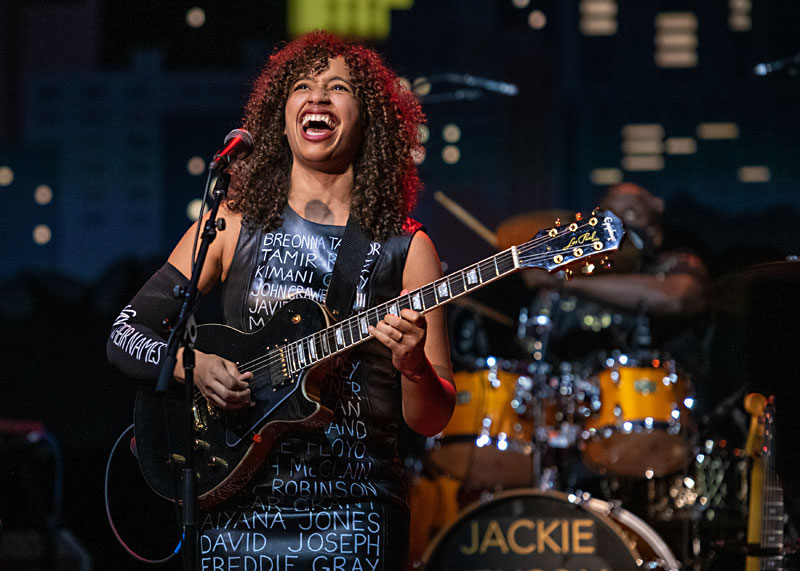 Austin Chronicle: Your album last month, Vintage Machine, feels distinctly autobiographical in spots. "Awake" touches on your musician father's sacrifices, and "Home" is an ode to growing up in Austin.

Jackie Venson: Vintage Machine is my manifestation of what I wish pop music could be – full of thought and four-minute songs – so it's produced like a pop record: crisp, clean. Lyrically, it's my feelings on pop and how I formed those feelings, because of what my dad went through and because this is where I grew up. I think of pop not as a genre but as a phenomenon, and this is me trying to affect the phenomenon.

AC: On "Lofi," you tell yourself to never lose focus and remember where you come from.

JV: I'm meta calling myself out: "Bitch, I thought you loved music! At 8 years old, you could have been riding a bike, but you were practicing piano because you love it. That's why you're doing this, not because you want to be some pop star!" Then I capture that in a high quality product, so it's almost a middle finger to all the people out there making shallow shitty pop music.

AC: You released two volumes of "Jackie the Robot" recordings that are beat-oriented, heavily electronic, and sampling yourself. Was that to prime your audience for the expansive sound of Vintage Machine?

JV: No it wasn't, but it actually ended up doing that. I've always wanted to be a DJ doing mashups like Girl Talk. I finally had the time to develop that side project. I got all my stems from my producers and started remixing it using a DJ table and a sampler. It's an amalgam of reject songs, stems of already recorded new music, and beats that I made on a drum machine or found on GarageBand loops.

JV: Mixed emotions. The reason I went into overdrive was to stop myself from bombing my whole life and having a meltdown. It wasn't like I had a New Year's resolution: "Okay, there's gonna be a pandemic, I'm gonna almost lose my mind, and instead I'm going to release four albums and get an Austin City Limits TV taping." The work I've done has been in response to how hard the year's been. – Kevin Curtin

If cover art evocative of Nirvana's Nevermind fails to pique interest, Tyler Murray's opener on Pollution will. Following up February EP The Art of Ugly, the concept of using soundbites from boxers like Muhammad Ali isn't new to hip-hop, but as Jedi512, the Austin rhymer sizzles on the "Mike Tyson Intro," originally released as "Iron Mike": "We ain't lookin' for no friends 'round here/ Y'all gentrified and took it all, we ain't got shit 'round here/ Y'all killed my friends and locked us up 'round here." Dark, synthy ambience coupled with a drawled-out intro establishes the mood for an establishing 21-minute tape. Proud cook, the MC chops and screws while repeatedly disclosing a never-back-down attitude. "Personal" implements a more normal flow while featuring flavorful lines like, "I'd rather see my momma than ever meet Michael Jordan." – Derek Udensi

No need for a catchphrase and fancy cover art when plainspoken words paint a powerful image. Jay Greene's latest single flashes back to potent, classic-styled hip-hop rich with thoughtful lyricism. The Austinite of Ghanaian descent lets a plush beat build before he unwinds, "My content ain't about the streets/ I didn't grow up pushing keys." The MC asserts his desire to reign as "kingpin of the ink pen." The four-minute onslaught minces no words when taking aim at current MCs he brands as wave-riding junkies, and the day Greene uses Auto-Tune will mark his fall off, according to him. Grunts similar to Marcy projects messiah Shawn Carter help mesh together the 35-year-old's declaration of his uniqueness and spirit. – Derek Udensi

Straight from the honeycomb, Daniel Sahad's timbre pours smooth, slow, and sweet as juxtaposed to the six-string metallic shuffle and outburst of percussion on opener "This I Know." Study in contrasts, "Always on My Mind" and single "Clementine Tree" reveal the Dominican Republic native's humble falsetto that alternatively soars to a holler with unbridled abandon. Nané is an ecstatic, expansive debut flowing in multiple directions. Producer John Speice IV (Grupo Fantasma, Brownout) gives the Austin quintet ample breathing room from guitarist Ian Green's rhythmic strut in "Wolverine" and JaRon Marshall's psychedelic keys in "Pink Jag." Grounding all, Sahad's expressive voice demonstrates impressive vocal range and power. In a stilling, late-LP twofer, "Ladybird" drifts weightlessly, like a flitting candle wick supplicating the stinging ache of R&B burner "Something's Got to Give" as his voice opens the sky and scorches the Earth all the same. Experience it live at Empire Garage on Saturday in two release shows.– Alejandra Ramirez

"We're kinda bored," Matt King told Decibel magazine this month. "We live five minutes away from our practice space, and I'm just sitting here working on music basically all the time." That yielded the Austin blackened screamo trio's second full-length, We Are Always Alone, due January 29. Exponentially more assured and powerful than on 2018 LP Let Pain Be Your Guide, King's rabid black dog of depression further obliterates the lines between hardcore, death metal, powerviolence, noise, etc. Advancing the album is a new eight-minute video for "It's Already Over" and "Masochistic Oath," a grim and all-too-2020-appropriate mini-film set in a European auto shop wherein man himself once again becomes the greatest game. King, drummer James Beveridge, and bassist Alex Stanfield cut We Are Always Alone earlier this year in East Austin at Cacophony Recorders, an e-blast for the disc glowering, "Portrayal of Guilt have written the soundtrack and gospel to a world on fire and set the standard for 2021!" – Raoul Hernandez

"I'm moving to Austin for an adventure," John Doe told the Chronicle in 2017. Having become a fixture on the local scene, the punk pioneer serves up a three-show run of virtual sets from local institutions C-Boy's, Arlyn Studios, and the Cactus Cafe. The first indulges in "fan favorites," digging into his legendary work with L.A. icons X and cowpunks the Knitters, while the second works up new material from an upcoming album and likely X's Alphabetland, the quartet's April LP and first studio album in almost 30 years. – Doug Freeman

Title taken from a 1934 Fredric March film about the Grim Reaper falling in love in Italy, Death Takes a Holiday masks its dark subject matter. Six songs into the second solo album by ATX New Wave pillar Larry Seaman of the Standing Waves, "A Lighthouse in Your Eyes" has a sunny Seventies, Laurel Canyon, country-rock feel as it rides on a cushion of massed acoustic guitars and harmonized slide guitar hooks from Jon Sanchez. Then you hear the lyrics: "Longing and despair, I pretend that I don't care/ Dot my I's and keep the chaos all at bay." He warbles with enough pathos and ennui to make Morrissey sound like he fronted the Archies. It's merely the tip of a bright, shiny, yet ultimately mordant LP, which of course fits 2020 like narrowly cut silk trousers. Features sympathetic backing from other Austin A-listers like Jon Dee Graham. – Tim Stegall

Will & the Wilderness: Tall Tales From Texas

Will Dupuy's been writing the songs on Tall Tales From Texas for the past 20 years, working the pen when he wasn't holding down upright bass for everyone from the South Austin Jug Band to Robert Earl Keen and Jason Boland. Those influences play heavy on the debut, easy back porch Hill Country tunes raised to exception with all-star backing like Noah Jeffries' fiddle and Geoff Queen's pedal steel. The burly Waylon Jennings bass lope that sets opener "Devils River" and the boogie through "Sanderson" tips off against the string breakdowns of "Feelin' Easy" and dancefloor swing of "City of Blue Lights." Dupuy and company then let it all hang out on eight-minute frolick "Summer Sunset." – Doug Freeman

Somebody Has to Sing It: Townes Van Zandt Album Release

Recorded, in part, locally at Terra Nova Mastering in the decade Townes Van Zandt (1944-1997) passed, Somebody Had to Write It amalgamates posthumous Austin releases Documentary and Last Rights for the first time on vinyl. Homegrown imprint Chicken Ranch Records worked with TVZ archivist Harold Eggers Jr. for a 12-song live cull, an intimate in-ear audience with the Lone Star storytelling martyr levitating through his holy songbook, moments including a rippling "Tecumseh Valley" and lucid "Cowboy Junkie's Lament," not to mention the title track and an almost late-life Billie Holiday time-stopper in "Brand New Companion." Fêting the occasion is an online Chicken coop hootenanny: Colin & Tammy Gilmore, Graham Weber, JM Stevens, Ian MacDougall, the Waymores, and more. "Somebody had to write it, you know," says the legendary song rambler to his equally late great friend, show host and documentarian Larry Monroe. "And it just happened to be me. I happened to be sitting in the right place at the right time." – Raoul Hernandez