Faster Than Sound: The Musicians at the Center of UT's "Eyes of Texas" Debacle 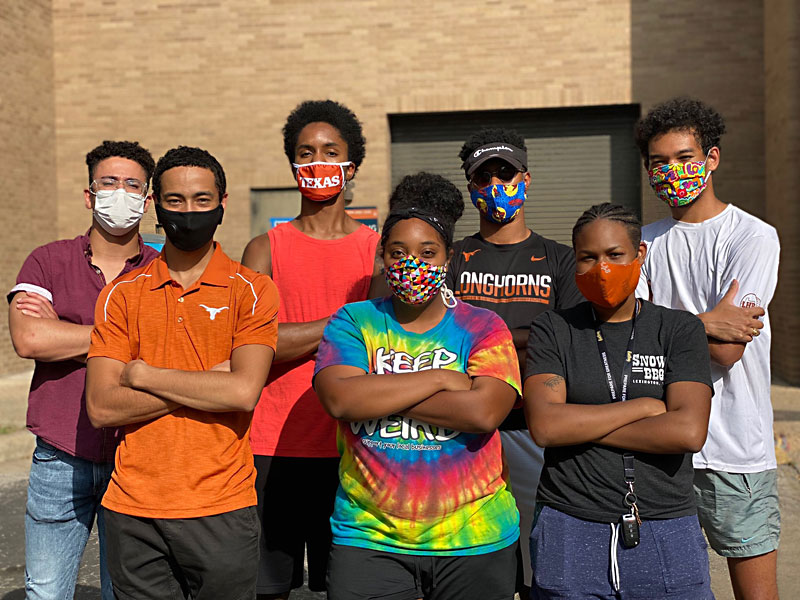 Musicians in the University of Texas Longhorn Band refer to the group internally as LHB. Rather than a burnt orange brass army seen from the stands, to them, it's a beloved musical and social student group. So when the Black members formed a group text earlier this year, they named it LHBlacks.

A running joke in the conversation rested on the tiny number of Black players: only 10 in the nearly 400-person band. They've since added three more from the freshman class, still falling below the overall university makeup of 5.2% Black students. Upon joining, junior Imani Taylor remembers an older peer informing her she was the first Black color guard member in at least five years – a fact she now proudly displays on her Twitter bio.

"I couldn't believe I'm the only one who's Black in my section," says Taylor, who studies sociology. "I don't want to say I was intimidated, but it was something I had to get accustomed to. My high school was predominantly Black and Hispanic. I would have felt more comfortable if I knew the other [Black members] back then." 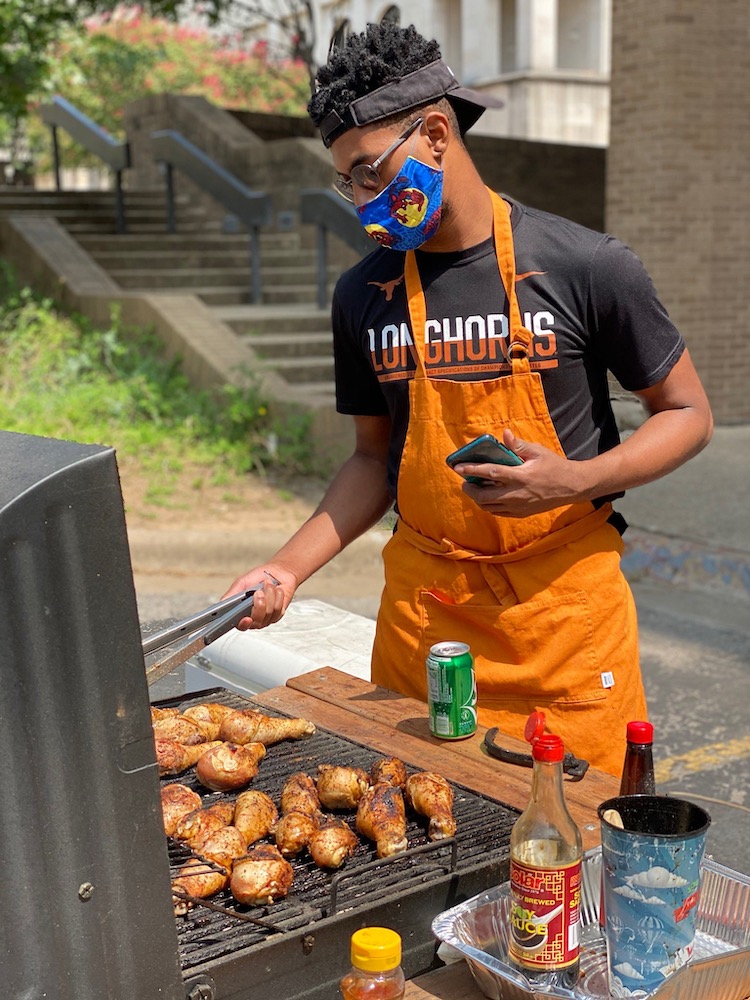 Saxophonist Devin Williams grills drumsticks at a past fundraiser.

Mercy Ogunlade, a clarinet section leader, says the LHBlacks group chat also became a natural forum for what she calls "band tea," including dialoguing about instances of white band members using a racial epithet. Over the summer, they organized rides to protests Downtown over the police killing of George Floyd. Saxophonist Devin Williams dropped off food at his bandmates' homes.

"Some of us weren't sleeping or eating, some of us were crying every day," he recalls. "We were just checking in on each other like, 'Hey are you good?' With COVID, we all just felt really alone. It was really emotionally vulnerable, and that kind of rallied all of us."

LHBlacks filed to become an official UT student organization on Juneteenth, with the goal of providing community for Black band members and helping recruit more. During regular Zoom meetings, many said they wanted to participate in a Black student org but were limited by a rigorous practice schedule. They've connected with Black alumni who wish they'd had the same thing.

"It's given me that community that I've always wanted at UT, but I couldn't always have because of band," explains Ogunlade, who manages group outreach and social media.

While LHBlacks built community, a debate raged over a standard of their catalog, "The Eyes of Texas." In the summer, dozens of UT athletes signed a letter requesting reckoning with details of UT's racist history, including replacement of the song. Despite the tune's origins in minstrel shows, with opening lines pulled from Confederate hero Robert E. Lee, incoming UT President Jay Hartzell announced "The Eyes" would remain.

In an unprecedented swing of power to band nerds, the musicians came to a different conclusion. LHBlacks debuted to the larger public in August, when all of the members, along with drum major Ally Morales, announced they would not play the song during the upcoming football season. A recording of the absent performers blares on the loudspeakers instead.

Sports coverage blamed the protesters for the lack of live music at reduced-capacity games, but it's unclear whether they would have returned under COVID-19 restrictions. The Longhorn Band continued sparsely attended optional rehearsals in the stadium until College of Fine Arts Dean Doug Dempster recently issued a statement deciding the band won't play the final home game. LHBlacks President Judson Hayden appreciates all the questions raised about who oversees the voluntary mass of students. 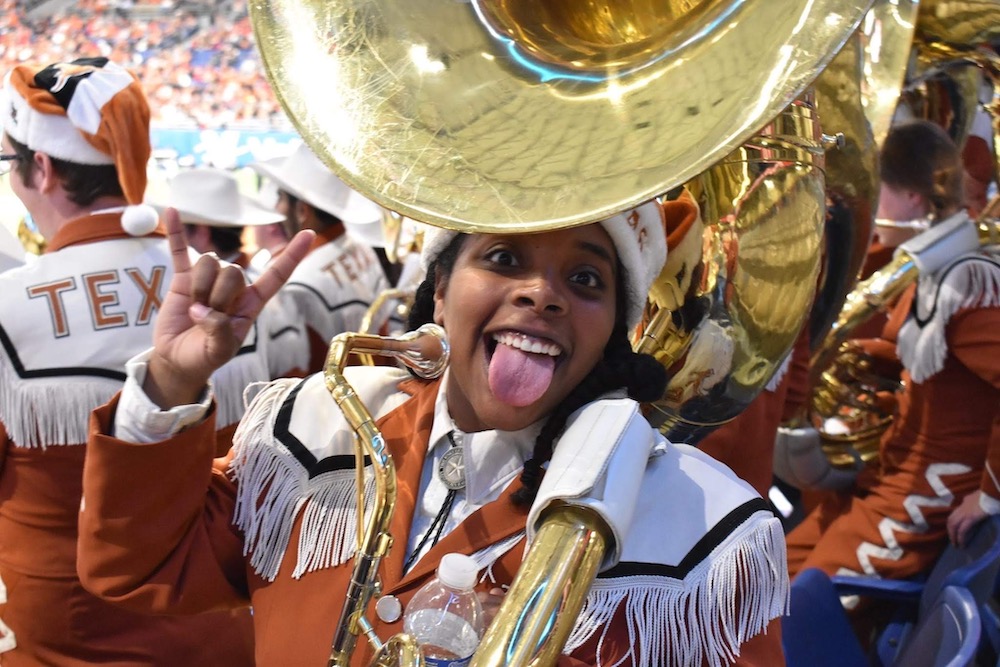 Tuba player Kyanna Richard at a past UT football game

"At any [predominantly white institution], the band's job is to contribute to the culture of the school, but to do it in a way that they don't get noticed," he says. "They're just always there, and then when they're not there, everybody raises all hell. That's what's happening now, and it's kind of cool, because in what other world does the band get this much attention?

"And what would the university do should the Longhorn Band decide not to [play the song]? That's a really interesting conversation."

Comments on the Longhorn Band's latest Facebook post drum up tired backlash lodged at Colin Kaepernick and other athletic activists – basically, respect the traditions or get off the field. Yet no one in LHBlacks considers leaving. They really, genuinely like it.

Some are bummed about missing senior year traditions and reminisce about seven-hour drives to Oklahoma State. Taylor still practices tossing her color guard flags at home. She's sad to only have a 6-foot pole, not her preferred 8-foot "Big Flag."

Because of the blowback, LHBlacks members are reluctant to talk about the school song. And because they're band kids, they're really polite about it. After their hardline launch, they've learned to be diplomatic going into meetings with President Hartzell and directors.

Asked his current stance, Hayden takes a while to consider his words.

"In the future, I think that everything the university can do to better the experience of Black students, it should do," he says finally.

When asked if he personally would play "The Eyes" again, the answer is easy: no, never. Ogunlade already told her fellow clarinet section leaders she will neither teach nor perform the song. She's done her best to push her strong opinions aside and host group discussions.

"When I got to orientation, hearing 'the eyes of Texas are upon you,' it really freaked me out," she says. "I know where it comes from, and I think it's really disrespectful. But we know the president and the band director are in a position where they need to please not only us, but also the alumni that want to play the song. So, let's compromise."

Last week, UT announced a committee to document the history of "The Eyes" "as part of [the university's] commitment to fully own, acknowledge, and teach about its school song." The statement said the piece will remain the official alma mater. The committee, including LHBlacks Secretary and tuba player Kyanna Richard alongside faculty, students, athletes, and alumni, plans to wrap research by the end of January.

For now, LHBlacks focuses on fundraising to connect low-income high school band students with private lessons through UT. They accept donations at monthly barbecues outside the music building, the next happening this Saturday, Nov. 14, 11am-4pm. Past plates sold out quickly with campus-area deliveries.

Hayden prepares sides of collard greens and mac & cheese, while Williams grills chicken drumsticks that pull from the soul food recipes he grew up with outside Lubbock. As a senior navigating medical school applications, he considers helping build LHBlacks one of his proudest achievements over four years at UT. A junior in communication and leadership, Hayden aims for graduate studies in education policy.

"That's one thing I keep reminding myself to thank LHBlacks for: Never in a million years, when I came to college, did I think I was going to be in a meeting in the president's office talking about ways to improve campus culture for Black people," he says. "I'm really grateful." 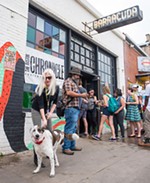