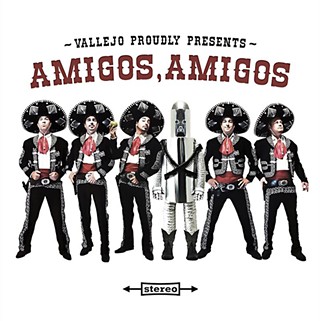 2020 marks 25 years blowing up Austin rock for brothers AJ, Alex, and Omar Vallejo. Decades of shows, albums, artist development, label management, and every other facet of music industry begin to look dynastic when stacking an ecstatic catalog that kicked into this millennium on Sony with Into the New. What followed, in part – Stereo (2002), Thicker Than Water (2008), Acousta (2010), Brothers Brew (2012), and 2016's über ambitious dual language twofer Unified/Unificados – carves a savvy, ever-modernizing brand deep into the local limestone.

"We want to take the Latin sound of Tito Puente and Santana and push it an extra step," Alejandro told the Chronicle in 2000.

Given Grupo Fantasma vehicle "On Fire" lilting a Rob Thomas tempo and Carlos Santana guitar, Vallejo continues to do so with its own Supernatural moment, Amigos, Amigos. Sandwiched between opener "Drive Me Crazy" alongside David Garza – slinky, lithe, and layering a percussive acoustic spine atop a viscous layer of batería – and Del Castillo's fiery "Widow's Kiss," the second track proves at a glance that the Austin fivepiece, which includes high school mate Bruce Castleberry on second axe and percussionist Alex Geismar, couldn't have picked a better pandemic to materialize the group's grand collaborative mash-up of 12 distinct duets. Distanced being the era, Amigos, Amigos commingles hard and loose.

Mexi-rap (Suede Austin's "Otra Vez"), OG R&B (Candi Sanders' "Crawlin'"), Tex-Mex (Ray Benson's "Eyes of Texas"), and country gospel (Dale Watson closer "You Are My Friend") all party down in a manner reminiscent of our once and future music capital. Yet look out for the ladies, Gina Chavez playfully teasing AJ on Texas Tornados cover "Who Were You Thinking Of," and a tremulous indie rock contribution from Nina Diaz, "Coming Home Today," echoing Linda Perry, Amy Winehouse, and Nina Diaz. The former tune receives an encore of sorts when the Texas twister himself, Flaco Jimenez, lends cantina squeezebox to Lone Star campfire frolic "El Campo."

Positioned dead center, "It's Goin' On" from MC Overlord & DJ Crash is, in fact, the LP's central highlight and most stunning cut. Tight verses over taut Vallejo bass and guitar and a limber Miami Vice rhythm, Donnell Robinson (1969-2018), aka MC Overlord and Big Don, suddenly rings into your auditory canal like Biggie Smalls booming back from beyond, or a slab of vintage Chuck D and LL Cool J, bumping a synth line that plucks strings enough for some Curtis Mayfield-esque urbanity. That's all before an otherworldly editorial breakdown from Overlord folds Amigos, Amigos tightly to his big, broad chest:

"See, the problem is some of y'all out there have to look in the mirror. You have to understand what the world is really about. It's not about all this nonsense that's going on. It's about what you want to make it. You can be your own leaders. Stop being followers. You dig what I'm saying? You don't have to be followers. You can be yourself and still be leaders. Understand what the future is all about."

Robinson punctuates the take with a deeply human laugh, as real a musical moment in ATX 2020 as any. – Raoul Hernandez

Transformative covers change how you hear a song, and by that metric, Willie Nelson and Karen O's take on Queen classic "Under Pressure" is a revelation. The Yeah Yeah Yeahs' siren reached out to the country legend to sign a petition in support of shuttered venues, which led to the duet. The New Yorker thus strips the song of its Freddie Mercury and David Bowie grandiosity, exposing the raw realism and brutal plea of lyrics without losing the call to action, hope, and love. Nelson's weathered vocals ring with a weary experience to O's searching ache, resetting the original as a song of determined endurance. – Doug Freeman


Music For the Mind

"When venues close, the numbers coming to us increase exponentially," SIMS Foundation Executive Director Patsy Dolan Bouressa acknowledged at a Sept. rally for city music funding. As such, the nonprofit providing mental health and addiction recovery services to Austin musicians remains critical in 2020. They fundraise on Thursday with a virtual event hosted by Joe Barksdale, a former offensive linemen who left the NFL to work on his mental health and is now a singer and guitarist based in Austin. The $10 concert, broadcasting from Arlyn Studios, features performances from 5D, Blackillac, ... And You Will Know Us By the Trail of Dead, Bright Light Social Hour, Brownout, Gina Chavez, La Energia Norteña, Ley Line, Mélat, Riders Against the Storm, and the Wind & the Wave. – Kevin Curtin

Last year's eponymous LP delivered a statement from Patty Griffin: reclamation of identity and purpose after recovering from cancer. Personal, poignant, and wise, the album meditates with a powerful auger of mortality and determination of life, a high mark on an already transcendent songwriting career. The veteran local rolls back through that exceptional catalog with a livestream residency from Continental Club to help support independent venues. The first of three unique live shows broadcasts Saturday through the new Mandolin platform, which has become a virtual home for a number of Americana artists. Subsequent shows stream Nov. 21 and Dec. 5. – Doug Freeman

The Sour Notes: More Is the Pity

Few Austin groups are as prolific with new needle drops as the Sour Notes. Already a grip of wax in their oeuvre dating back to 2009, Jared Boulanger's ever-evolving troupe dished out five limited-edition 7-inch singles between June 2019 and July 2020, the end result compiled into this new 11-track LP. Self-recorded in part at Barracuda, much of the current trio's material lends itself to an alternative crunch-pop identity, reaffirming an affinity for the Beatles and Ken Stringfellow's Nineties power-pop stronghold. Moonlighting as a duo, Jared and Sour Notes bassist/spouse Amarah Boulanger embrace synth-pop on the side as Memory Keepers. Third single released in June, Primal Scream cover in tow, they unveil a new single on Friday the 13th. – Greg Stitt

After years performing with locals including Wild Child, Ley Line, and the Bishops, Daniel Fears debuted his own elegant, expansive take on contemporary R&B with "No Substitutions" in April. The classically trained saxophonist broadens out further on new EP Canopy, running rich, longing vocals over intense piano and electronic soundscapes. "Heard and Misunderstood" sets the course for slow-rolling introspection by requesting, "Let me say what I'm thinking." Smooth, old-school harmonies soften "Everything Changes," shifting into pensive, Frank Ocean-inspired modernity with ATX collective Soul Food Horns. Even-handed in emotional intensity, six songs introduce a soloist adept at when to go bold and when to hold back. – Rachel Rascoe

Taking a freight train southbound, Mistaken Identity sits at the crossroads between Louisiana and Texas. Opener "She Stole My Mojo" serves up blues chock full of baritone growls and howling harmonica, which leads into chicken pickin' twofer "Mule and the Devil" and "Spark to a Flame." Whereas the former serpentines down the deep bayou via lurching clavinet and slinky slide guitar, the latter wafts Southern prairie on jangled acoustics and percussive rollicks. The Greek-blooded guitarist and longtime local dips into country behind the stinging ache of Stephen Brunson's "River Runs Deep." Ripping through juke joints ("Tight Pants"), honky-tonks ("Wanna Be Your Baby"), and down to the border ("She Didn't Think of Me That Way"), Nicholas' eighth studio album tips its hat to the bottomless expanse of American roots music. – Alejandra Ramirez

"'Clarity' is an ode to the truth," explains rapper/singer/songwriter Anastasia about the personification of the ballad's title. Produced by regular collaborator Ty on da Track, the song leans heavily into the local's newer trap-based focus and live instrumentation. "I think women have a way of breaking things down or clearing things up authentically [within a relationship]," she furthers, "but of course, she [Clarity] won't appear if you don't ask nicely, if you don't flatter her a bit. So we tell her she's 'pretty like a flower' and ask her to 'come on, pull up, come on through.'" – Kahron Spearman

Ethereal and unnerving but always engrossing, Tommy Jammer's banner year of electronic avant-pop under the Saliyah alias crystallizes them as a talent bound for breakout. A short-order February cassette on the local Somatic imprint debuted six tracks "rewriting soul and R&B influences through a submerged, minimal industrial perspective," Rachel Rascoe asserted on the eve of September single "Sleep" and a Brown State of Mind stream. Friday sees the release of "Crush," lead-off from the upcoming Sanctification EP for homegrown tape label Growth in Decay and a fortification of style. Constructed around an oscillating synth rhythm framework, trip-hop beats skitter across slow-pulsing bass as Jammer's vocals add a measured warmth, silk-smooth but equipped with a knowing restraint. A preorder for the tape goes live with the single release. – Greg Stitt

C-Side Records ran prolific last decade, the area collective anchored by the anthemic swell of Golden Bear and quirky pop of the Channel. The core reconvenes for a triple drop of new albums proving there's still plenty of fuel in the tank. Chris Gregory's Golden Bear trades exuberant pop for twangier country road anthems on Dear Texas, Seventies folk-rock riding hard in the harmonies and Scott Akers' pedal steel. The LP revs a top-down tour of Texas, a love letter as hopeful as it is nostalgic, from the highway boogie of "Roadtrippin'" to the truckin' rumble of "CB Workin'," and Cub Country lilt of "Fort Davis Sky." Colby and Brent Pennington lean into the surreal with the Channel's Electronic Luck, delicious psych-pop hitting somewhere between the Byrds and Dr. Dog. A dreamy "Mello" sparkles and Daniel Johnston cover "Lord, Give Me Hope" hymns with tension and release. The gem of the collection falls to new collaborative Cosmic Convoy, with Brent recruiting Gregory and drummer Andy McAllister for an alt-country swerve. The EP leads Marty Robbins-esque with "Rosanna," but standouts prove the sad waltz "Anodyne" (not the Uncle Tupelo song) and the lonesome call of closer "Bound." – Doug Freeman