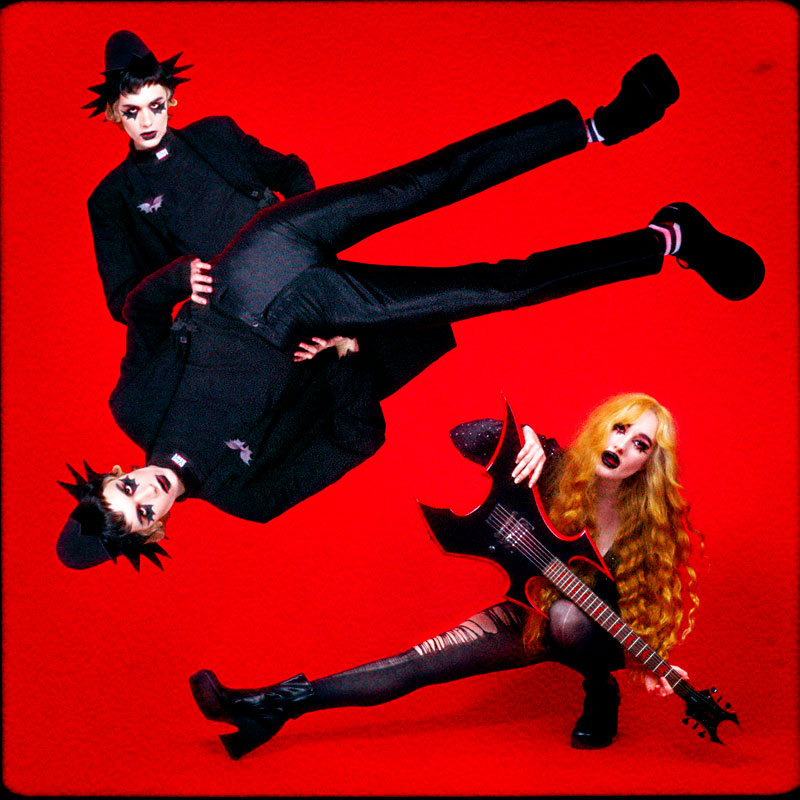 "Halloween's what I live for, so I'm very sad this year's going to be different," laments singer Felix Lenz of Lord Friday the 13th, who last Oct. 31 dressed as the Grim Reba, an amalgamation of Reba McEntire and the cloaked specter of Death.

"Usually, the day after Halloween we know what we're going to be next year, but this year we haven't landed on anything concrete," adds big sis Sloane Lenz, a fashion designer and guitarist. "One year, we were Mary-Kate and Ashley Olsen. Another time, I was Laura Palmer from Twin Peaks and Felix was Donna."

"I'm sorry, did I offend you? I certainly did intend to!" shouts Felix on potent new single "Bigots Beware." Over Sloane's slamming power chords, he continues: "Ignorance isn't bliss, when it's what you're up against!"

"We're from Athens, Texas, and it's a super conservative, Christian place," explains Felix. "I felt very 'other' there, but now Trump has made it a much more sinister division. I feel actively in danger ... just for existing! With 'Bigots Beware,' I don't want to annihilate those people, I want to wake them up."

It's the first fang bite off an upcoming 2020 full-length the Lenzes recorded with Pete O'Hanlon and Evan Walsh of the Strypes, plus Becky Walsh, in Ireland. Its working title, Murder Music, refers to their self-ascribed novice status wherein they actually murder music. The sibs also await Guinness World Records to accredit their recent 24-hour Zoom, a variety show/telethon/sleep deprivation challenge.

"My eyes were so sore from looking at tiny faces on the screen for so long," admits Sloane.

Akina Adderley wrote "Broke" before this summer's wave of social protest but the song finds its moment this election season. The anthem swaggers funk rhythm and scorching guitars as her powerhouse vocals demand, "There's a price you pay for freedom called responsibility," and calls to task a system of oppression: "Don't look away, you broke it, you bought it." The track delivers Adderley's first solo blast since 2013, stepping out from her jazz band Nori and numerous harmonizing roles. While uplift defines the tune's relentless momentum, it's a call that acknowledges the heavy work to be done in building equity. – Doug Freeman


Ali Ditto, "Better Than Me"

Band photographer for hire and an axe wielder in current or erstwhile locals Mean Jolene, Missing Pages, and Talkies, Alison Copeland released a one-two punch of solo singles spurred by a year with little chance of band practice. The first, "The Stranger Song," debuted on June's third installment of the Slack Capital series, a Phil Spector-esque lo-fi pop haunt squaring itself up as one of the compilation's standouts. October closes with "Better Than Me," a bittersweet hymn recalling Karen Carpenter. "Everybody knows that this song is about you," she aches in a darkened Carly Simon refraction as strings ebb and flow through a three-minute run hopefully setting the stage for a full-length. – Greg Stitt

Giulia Millanta: Tomorrow is A Bird

Unrushed acoustics stroll alongside Giula Millanta's airy timbre, "Today is a feather, tomorrow's a bird." Fitting lamentation to Tomorrow Is a Bird, the title song carves out delicate Americana burnished by the Austinite's voice taking flight. Following a similar thread to 2018's Conversations With a Ghost, the Italian native's seventh album weaves strummed ruminations and midnight melancholy into a satisfying, emotive whole heightened by a beautifully uncluttered arrangement highlighting Millanta's and David Pulkingham's tranquil guitars, Brian Standefer's ethereal cello, and Gabriel Rhodes' production. Earnest and baring, her songs glean a tactile intimacy that swell with heart. Her emotional awareness conveys these listless times on "Castle in the Clouds," and loving kindness yearns with a crying insistence in "Sugar Home," casting that same stirring spell for the stinging ache of "Kiss You Goodbye" and smoldering "Unconventional," the closer that burns bittersweet. – Alejandra Ramirez

Kalu James reflects the whole of humanity on this revelatory new single, inverting police violence, racism, religion, and wall-building into an inner unrest that's palpable. "Our savior lives in the mirror/ Looks like me, feels like you, lies like us," he sings over a heavy rhythm track that widens and redefines the musical structure he's built in Austin over the last decade. It's both the finest lyrical work from the Nigerian American, who just proudly voted in his first presidential election, and the unit's best moment. JT Holt's slippery multi-tracked guitar sounds like Egyptian LSD. – Kevin Curtin

Tyrus Kendrick shares an undeniable synergy with fellow Austin crooner Ghostboy Jaysee (Jean Meama). The latter features on both singles released by Austyn Armand in October. "By My Lonely" finds the MCs turning a potentially throwaway track into a relaxed vibe about maintaining a go-getting mindset. Solid singing from Armand on the hook impresses especially. "Say My Name" contains a sing-rap style geared more toward Jaysee's discography, but also suited for Armand as evidenced by this lane switch. Producers Frosty and Dee3x lace a beat bristling sharp acoustic riffs and incisive drums, while both rappers beg women not to tarnish their names. Austyn Armand sure sounds motivated. – Derek Udensi

Jalen Howard ushered in his 28th birthday with a celebratory bash for This Ain't Shxt. The East Austin rapper's sixth studio release follows May long-player From the Soul, its five tracks concocting Soulja's usual "512 wrist work shit." A heavy dose of bars feature on the 15-minute regular edition, while the deluxe version – currently an exclusive given out to release party attendees – adds four more joints highlighted by a Teeta guest appearance. Creator of the Smoke Out ATX hip-hop series gives gratitude for God helping him find his way and the inability of snakes to rattle his drive. – Derek Udensi

"Golden Age of Outrage" / "Terry, What Are You Thinking Of?"

Kevin Russell locates the groove in anything, including our current social (dis)order. Shinyribs' latest offering reports from his darkly lit bunker ahead of Election Day, cycling through all-too-familiar internet footage of mask meltdowns, squad cars burning, and power fist rallies. Never shy on speaking up, the group leader aims his wit in meta-commentary on "outrage as the new religion," with the Tijuana Trainwreck Horns providing a backbone of punching riffs to the Shiny Soul Sisters' (Kelley Mickwee and Alice Spencer) kickboxing backup vocals. The Ribs rhythm section, bassist Jeff Brown and drummer Keith Langford, unspools their own quarantine project, teasing an album with a string of singles and latest video "Terry, What Are Thinking Of?" The easy croon and strum hearken Brown's band the Savage Poor with a touch of Paul Westerberg as the local trio dance around their basement bar. – Doug Freeman

Choctaw Wildfire desecrates the white man's pantry, bathroom, and presidency! A New Orleans brass promenade, "Dingleberry Pie" teases the locals' first album since 2015 mad dogs and Englishmen roundhouse Nowhere by blowing through 80 pie types in 3:35. Landing on the flavor of the times, ringmaster Charlie Pierce clears a throat full of Leon Russell, Dr. John, Tom Waits. Synced to the election, Nashville's Shaye Smith whammies up a scatalogically profane video decrying Hamp (what my 6-year-old calls our current president). "I wrote the tune years ago when I lived in Michigan and taught in Benton Harbor as the school district was crumbling," emails Pierce. "It was a miserable situation and writing about that reality as being a piece of dingleberry pie helped me laugh about it. I never intended the song to be about IMPOTUS, but felt it an appropriate description of his presidency." Catch the tribe live in person on Election Night at Guero's, 7-8pm, then performing a midnight set at Sagebrush. – Raoul Hernandez


Sideshow Tragedy: After the Fall

Something happened on the way to recording this Austin garage-blues duo's fifth full-length, After the Fall: Song-n-sound generator and National Reso-Phonic guitarist Nathan Singleton's 16-year marriage crumbled. So he, articulate caveman drummer Jeremy Harrell, and producer Kenny Siegal – who worked with inspiration Chris Whitley – decided this record required new colors: bass, keyboards, horns, choirs, even Tom Waits' avant-blues guitarist Marc Ribot ("Hold On It"). Singleton unleashes his inner Lou Reed on a clutch of glam Stones rockers, each one seemingly redolent of a crumbling personal life: "My teeth are loose in my head, my gums are bleeding, and my breath smells like death," he intones mordantly in "The Lonely One," "Won't take no medicine no doctor prescribes, but that's okay, 'cuz you know I ain't ever gonna die." Sideshow Tragedy livestreams a release party Friday via Bud's Recording Services. – Tim Stegall

Tele Novella explores the charm of Lockhart even in lockdown with a first taste of new album Merlynn Belle, expected in February on influential indie Kill Rock Stars. Whereas 2016 debut House of Souls swooned a psych-pop vibe, "Technicolor Town" lilts with a lo-fi grace and sense of magic. In the video, directed by Vanessa Pla, Natalie Ribbons and Jason Chronis offer a love story within and to their home, skipping through the quiet town square and emptied theatre in an anachronistic pantomime and silent movie, a wilting moment of beauty and wonder. – Doug Freeman