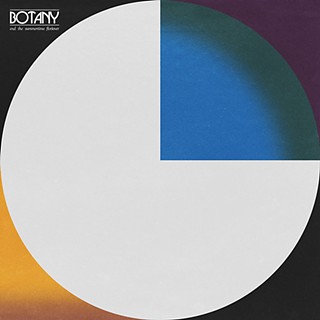 Bleak and feverish, End the Summertime F(or)ever aggregates into a harsh, revealing, socio-political/socioeconomic chemical peel for the world and Austin multi-instrumentalist Spencer Stephenson.

"I've noticed in my own emotional work as a person that a heavy sense of nostalgia always precedes my stormy phases," he emails. "If I start longing for some misremembered moment of my childhood, I know there's trouble ahead. I wish that the half of society which yearns to 'make America great again' possessed this same cautionary impulse toward longing for the past."

"The Way" starts as perhaps a false bottom, feigning a hopefulness that quickly fades. From there, the gorgeously topsy-turvy album swims in the sounds of bygone eras found, lost, and found again, not unlike similar collagists. Life quickly turns sour with the drone and vocal-washed, J-Dilla-esque "Your Whole Life" and "Quiet Down," a reflective acid dream bathed in dangerous nostalgia. "She Will Be" repurposes the oft-utilized classic sampling of Mountain's "Long Red" into a shimmering cosmic emulsion.

Anchoring the backend, along with the supernal "E.O.T.S." as album standouts, "Tele-vangelis" is a trap-based tidal wave of atmospheric synth and vocal emulsions. For Stephenson, America's warped concepts of the ephemeral American dream continue surging into realized nightmares.

"Unapologetic racism and violence, Christian fundamentalism, moral cherry-picking, corporate dominance, income inequality, science denial, historical revisionism, a withering biosphere, and trying to intellectually reconcile the very existence of all that bullshit every day makes me tired," he admits. "It's affecting my creativity negatively for the time being, but the pressure may form a diamond down the road for me. At what cost, though? I'd rather have a better world than a good record."

Stephenson is faulty on one account: End the Summertime F(or)ever is a fantastic record. – Kahron Spearman

There's a supreme stillness to "Karen O." A dozen lines of reflection, in which Laura Colwell passes through a sleeping city dreaming, longing, not answering her phone, resound like morning thoughts you jot down before they escape. The second pre-single from February 2021's Somewhere delivers one of the sparsest arrangements yet from Austin's notably gentle somber-pop group. Over serenely swept electric guitar and a slowly evolving beat, Colwell's voice imbues an honest vulnerability in every perfectly placed word. – Kevin Curtin

Beatboxer extraordinaire Ben Buck continues his foray proper into rapping with last month's Speaker Bump Deluxe. Not only rhyming on the 23-minute project, he produced all nine beats on his second rap release. Lo-fi and boom bap backdrop sinister lyrical venom as the ATX MC aggressively channels his love of old-school hip-hop on collaborative efforts such as "Yes Yes" and "Combos," which evoke Nineties posse cuts popularized by New York ensemble Wu Tang Clan. Consider, for starters, the human beatbox's growing list of co-signs from artists including Ghostface Killah and Freddie Gibbs. Buck reflects on 2020's pandemic-ravaged year and its effect on both him and his hometown's live music scene via album closer "Barfly," wherein he expresses grief regarding the closure of Barracuda, Plush, and Scratchouse. – Derek Udensi

A rare case of an album's track sequence providing humor in and of itself, Sex Pümp commences its pulsating laser disco playlist with uplifting party notification "Dancing Shoes," then transitions immediately into "Cry With Me," an invitation to weep in which Russell Porter warns, "If you don't cry with me tonight, I'll have to cry alone." In other words, the self-styled "most dangerous band" in Austin injects shared emotional pain into its decontextualization of disco lifestyles. The nine-track debut spins an aggressive pastiche of Seventies dance music, with Mark Rodgers' skilled guitar stylings ranging from rock to porno-funk and Porter – vocalist for notorious punk act Fuckemos – embracing a watery vocal effect complimenting the quartet's dance-floor-worthy synths and samples. Uptempo bubblegummer "Sea of Love" evidences the frontman's playful penchant for injecting suspiciously innocent lyrics into ultra-strange music, though he later goes full Terminator on "Rob This Party." Meanwhile, "New York '79," with its sweat-dripping saxophone leads, warps you back to seedy, sleazy times where Sex Pümp serves as a fitting soundtrack. – Kevin Curtin

Cameron Allen punches in swiftly with a scratchy, rabid flow uttered through clenched teeth. The Dallas-native-turned-Austinite continues to amass buzz thanks to succinct, energetic rap singles demonstrating a no-nonsense, perpetually-ready-to-spark attitude. He currently sports nearly 50,000 monthly listeners on Spotify and nearly 200,000 streams on SoundCloud for the year. New single "Sparrow," produced by Triple 7, references everything from the NBA's Detroit Pistons to toaster treat Pop Tarts as bizarre metaphors for the indie rapper's willingness to get active. The ascending artist sold out his first headline event at Texas Music Ranch on Oct. 10, coronavirus and all. Two more singles produced by the Birdhouse (Zachary Ingraham, who doubles as Dubbo's manager) are scheduled to round out this month. – Derek Udensi

Austin shoegaze trio Ringo Deathstarr beams bright light into a murky musical world. Thank their willingness to inject punk aggression into ethereal gauze, indulging a fondness for the Stooges more than Cocteau Twins. For their eponymous sixth LP, the locals get more expansive than usual. The cloudy "Lazy Lane" swirls, the lugubrious "In Your Arms" swoons, the beat-driven "Be Love" shimmies, and the screeching "Just Like You" slays. A gliding, guitar-driven "Once Upon a Freak" dives into My Bloody Valentine, while the cheeky "Gazin" fields a poptastic shimmer. For RD purists, "God Help the Ones You Love" and "Cotton Candy Clouds" stoke the group's O.G. m.o. when guitarist Elliott Frazier disrupts bassist Alex Gehring's cooing dream-pop with swathes of ugly beauty. The band sounds like it's having a blast being postmodern psychedelic magpies, and their ability to craft a good song keeps this from being merely a Ringo Deathstarr pupu platter. – Michael Toland

Jeremy Slemenda's often caught grinding guitar for rocking roots outfits Them Duqaines, White Ghost Shivers, the Saddle Sores, and the Jerrells, but he cut an off-the-radar gem during lockdown with Quarantine Sessions. The tireless local works a perfect honky-tonk yelp and twang on his cover of Jack Turner's 1958 B-side "Got a Heart (That Wants a Home)," but the guitarist really boogies when he amps his rockabilly instincts. Takes on "Rock 'n' Roll Honky Tonk Ramblin' Man" and Gene Terry's "Woman I Love" smoke as he recruits friends like Doug Strahan and Ethan Shaw into the mix, but the highlight is standard "Out of Nowhere" getting a surf rock makeover. – Doug Freeman

"Best of Austin" banner winner in 2014 as a local scene and sound producer/mentor, guitarist Jonas Wilson also sent his prodigious talents crackling through ATX acts including Lomita, White White Lights, and the Queen-like Midnight Stroll with Ghostland Observatory's Aaron Behrens. Currently heading the institutionalization of a satellite music capital in Bastrop where he lives, the sonic wiz now embarks on his own Science Fiction Post Blues, due Nov. 20. Second single off the silky, electro-radiated LP, harmonica-lined pulsator "Be Like the Water" lives up to its album title, sonorous industrial funk and ooze. Find the advance tune sandwiched between two additional new songs in Wilson and local director/musician Jonathan Horstmann's 20-minute video for the Live in Bastrop series sponsored by the Visit Bastrop tourism department. Stream it exclusively at austinchronicle.com/daily/music and read more on the collaborators' immersive film postcard. – Raoul Hernandez

Swan Songs remains the kind of organization that separates Austin from other so-called music capitals. Founded and run by songwriter Christine Albert, the nonprofit provides "musical last wishes" via requested private shows for fans with terminal illnesses or nearing the end of life. This year's 10th annual fundraising gala goes virtual with Hill Country balladeer Robert Earl Keen serenading the group and supporters into its 15th year with impeccable narratives rooted in wisdom. Judy Maggio hosts the event, which also includes a blockbuster silent auction. As Keen promises, "We're dancing together at the end of the song." – Doug Freeman