Alongside the photo-op installation, it all happened on YouTube and continued to fundraise for the Austin Parks Foundation, a longtime focus of local ACL Fest promoters C3 Presents. Over three nights of what would have been weekend two, organizers streamed hours of archival footage – the oldest preserving String Cheese Incident in 2003 – and newly generated sets from homegrown acts including Black Pumas and Jackie Venson. Free to stream, the show successfully placed Austin talent and organizations before worldwide fans pulled by nightly headliners like Paul McCartney, Radiohead, Coldplay, Billie Eilish, and Phish.

C3 executed similar concepts to supplement its other main annual festival, Lollapalooza, and joined a rising tide of virtual festivals. Key to success in the new format is getting the artists to push the event to fans. On Saturday, a peak of over 13,000 viewers commented "I lost myself" during "Karma Police" by Radiohead – who shared the event across platforms – while only 7,000 fans relived McCartney's epic 2018 "Hey Jude" sing-along Sunday night. Macca's accounts focused on John Lennon's 80th birthday last Friday.

The footage served as a history lesson on ACL Fest's sustaining cultural stature, and also prompted discussion over what got left out of the capsule. Following the lineup announcement, many locals noted that no hip-hop acts were included among the new or old content, despite C3's all-star track record including Jay-Z, Kanye West, Cardi B, Kendrick Lamar, and Lizzo. Daily schedules unfurled additional content, such as portions of Khalid, Run the Jewels, and Rosalía's taping at the Moody Theater for PBS show Austin City Limits, which licenses its moniker to the annual convergence.

The high-energy, but awkwardly censored 2017 RTJ show began with "Talk to Me" off Run the Jewels 3. Available online, the clip finds Killer Mike extolling, "Born Black, that's dead on arrival/ My job is to fight for survival/ In spite of these All Lives Matter-ass white folk."

On the Zilker grounds, the best reruns caught artists in their prime: Alabama Shakes slaying "Don't Wanna Fight" after expansive 2015 sophomore LP Sound & Color, St. Vincent's band in flesh-colored masks on the pink-latex-wrapped 2018 Masseduction tour, and Spoon focal point Britt Daniel lying down onstage for "I Ain't the One" off 2017 hit Hot Thoughts. Last year, Billie Eilish commanding hordes of teens to "open up some pits, please" certainly proved a sign of the times. Ephemeral Twenty One Pilots and Zhu proved less iconic.

Best pile-ons go to Willie Nelson's 2016 gospel finale, inviting Margo Price, Mumford & Sons, Local Natives, and near everyone else on the lineup before a huge Texas flag. On last year's capture, hometown hero Gary Clark Jr. added the Petersen Brothers and Blackillac to an already expanded live band for a searing claim to the Beatles' "Come Together."

Alongside endearing promos for fundraising efforts at piano bar Donn's Depot and McConaughey-introduced interviews with local nonprofits, the APF pressed the severely underfunded state of local parks due to COVID-19. They entered into a partnership with C3 in 2005. Last year, the fest contributed more than $6 million to APF through a percentage of ticket sales that accounted for over half of the foundation's annual budget.

Rock quartet Otis the Destroyer made best use of the open-air concept, shredding behind aerial skateboarders at the Heath Eiland & Morgan Moss Skatepark (aka House Park) in a Nineties-styled clip.

With shiny production courtesy of Tito's Vodka, locals Paul Cauthen, Black Pumas, and Mobley performed among vegetable garden boxes at the Tito's distillery farm. The brand matched APF donations up to $10,000 during the livestream. A spooky version of the Pumas' "Oct 33" fit the mood, instrumentals dropping out for moving band vocalists Angela Miller and Lauren Cervantes.

Mobley's seamless, one-man mastery of drums, vocals, guitar, and backing visuals on the mirrored stage delivered one standout set. A strobe-lit preview of new synth-powered track "Mate" bodes well for his upcoming EP, Young & Dying in the Occidental Supreme. The promise of new Austin music, patchworked with nostalgic sunset performances of yesteryear, provided a happy face for ACL Fest amid a painful shutdown of the events business. 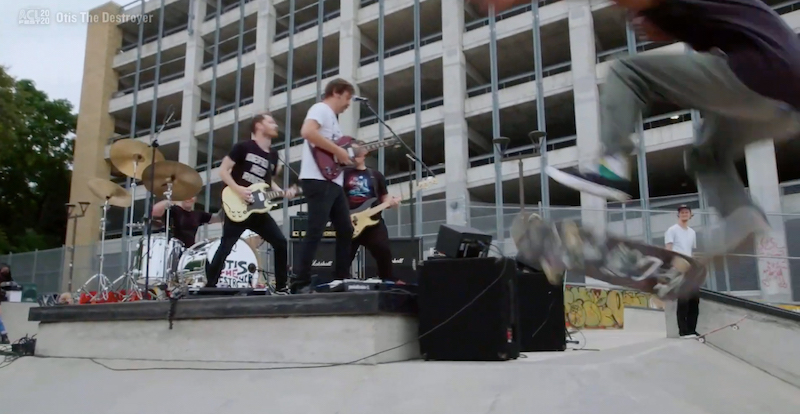