After a drastic career change, Barksdale looks for understanding and self-reflection 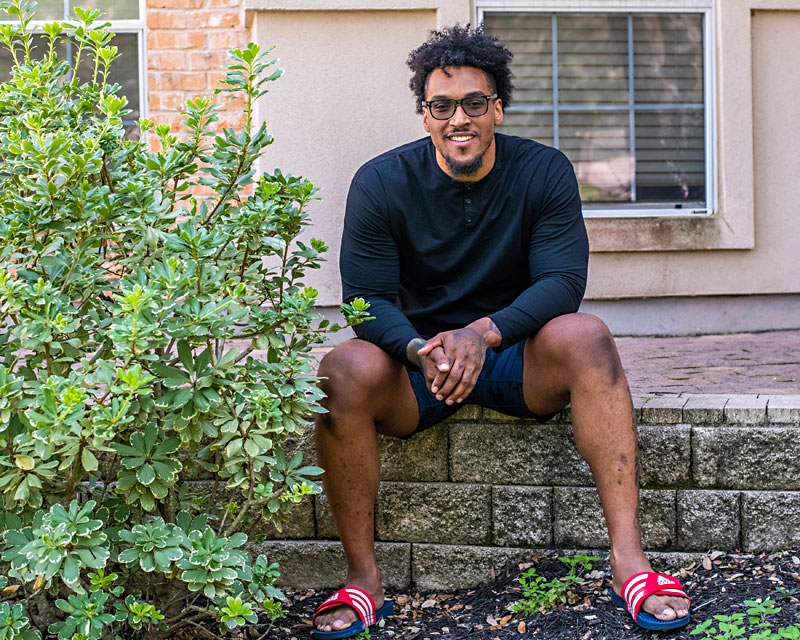 When we walk into the performance room of Austin's Orb Studios, Joseph Barksdale sits on a couch as his band Yours Truly readies a show for a benefit stream in his hometown of Detroit five days later. Group members come and go during the almost 90-minute in-person rendezvous. He stands up and introduces himself with, "Hi, my name is Joe Barksdale."

Maskless, he extends a firm handshake. The former NFL player sports a casual outfit. He grabs a guitar and clutches it during the entire interview.

AC: Did your size impact your ability to learn guitar?

JB: The hardest part is just having big hands and trying to figure out how to navigate an instrument with that. Between a lot of practice and some custom guitars, I got it together.

AC: What type of guitar are you holding right now?

JB: It's a Fender Custom Shop '69 Strat. John Cruz made it. It's a one-off. I call it my Green Ranger Strat [picks at strings slightly]. It's a chambered mahogany body, green and yellow with the Tommy Oliver sticker on it.

"I would consider my music like if Marvin Gaye and Jimi Hendrix and Sly Stone were writing music together and Kanye West produced it," ventures the 31-year-old before adding Stevie Wonder, Drake, and Teddy Pendergrass to a wide-ranging list of inspirations.

Abuse helped foster a tough childhood, but he credits his city for teaching hard lessons about managing rejection and neglect, and for instilling in him resilience.

A four-star prospect coming out of Cass Technical High School, Barksdale chose to attend Louisiana State University. Not the University of Michigan or Michigan State, but LSU, thus becoming the first state of Michigan signee in program history. Why LSU?

"'Cause people told me I couldn't play there," states the former offensive lineman sternly with direct eye contact. "'Cause I started when I was 16. There's been kids playing since they were 4, so they said that I would never get on the field [at LSU]."

The experience didn't go smoothly despite netting him a 2008 BCS National Championship. Racial tension, along with an apparent lack of institutional concern for the discomfort he felt with his school selection, settled in. His lack of love for sports as a whole consequently worsened.

A third round selection in the 2011 NFL Draft followed.

Barksdale played in 106 games for four different teams during his eight-year NFL career, with 78 of those appearances coming as starts. According to ESPN, he parlayed an impressive 2015-16 campaign with the San Diego Chargers into a four-year, $22 million contract. The deal contained over $10 million in guaranteed money.

The smoke and mirrors of the league, however, troubled him mightily.

"I heard the words 'nigger 72' [Barksdale's jersey number] from the stands in my eight years about 100 times, at least," he says calmly, describing the toxic bravado of sports fans.

“There were so many double standards in sports that I had to leave when I started feeling like a slave.”

Barksdale describes an environment in which people care little about what's underneath the pads. He recalls coming out about his mental illness one offseason, yet no one in the building said a word. The unhappy lineman retired from football in June 2019.

"There were so many double standards in sports that I had to leave when I started feeling like a slave," he says. "[The league] lost the collusion lawsuit to Colin Kaepernick and I was coming off a suicide attempt, so I was like, 'What am I doing?' I just couldn't continue to do it.

"I never fit in with my teammates. I mean I hated most of them and I feel like they hated me," he says with a chuckle. "But that could be the mental illness, I don't know."

The former right tackle asserts no bitterness toward the NFL.

In 2013, then playing for the St. Louis Rams, he found himself grieving. Charleston Fobbs had been killed that September in an automobile accident at the age of 47. The former assistant football coach at Cass Technical High (1994-2008) transformed an unsure teen fresh off getting kicked out of an engineering camp into an elite prospect in less than two years.

"He mentored me, helped me out," says Barksdale. "The only car I drove in college he got it for me. When I got drafted, he helped me with agents – all that kind of stuff. When he died, that was the first time I really felt like the NFL does not care about you."

He lowers his voice.

"Pretty much like if your dad died: 'Hey, that sucks, are you gonna come to work today?'"

St. Louis coach Jeff Fisher not only cared, he treated him "like a human." When a still-hurting Barksdale mentioned his intent to play video games and "do his thing" during an offseason meeting with Fisher, the coach offered a life-altering suggestion.

"You need something that you can focus on to help you process, maybe even a creative outlet," he remembers Fisher advising him. "You remind me a lot of my son in terms of your love of music. Have you ever thought of playing the guitar? He loves playing guitar."

Names like Jimi Hendrix and Freddie Mercury meant little to Barksdale at the time.

"I started playing guitar and I immediately fell in love with it in terms of the things you can do with the strings, the sounds you can make," he enthuses. "It was the voice that I never had. If it wasn't for Jeff Fisher making that suggestion, I don't know if I'd ever had it."

He whips out a small, navy blue notebook full of tidal tidbits and charts. He explains his training regimen on a typical day: 30 minutes of vocal exercises, an hour on guitar technique, and an hour creating beats plus guitar rhythm exercises. Nearly three hours a day go into perfecting his new craft.

"My first guitar teacher told me I would probably need someone to sing my songs," he recalls about his initial guitar classes. "In 2015, he was right."

In fact, there's noticeable improvement all-around on the singer-guitarist's discography.

Vocally, he sounds more confident and tuned with each release. He unleashes his Green Ranger Strat with conviction during the taping after the interview. An aspiring beatmaker, he claims to have amassed over 400 demo tracks since March.

That's How the Light Gets In

Barksdale makes no excuses when pertaining to his career transition.

"I'm very hard on myself," he admits. "Constantly, there's this voice in my head telling me I'm nothing. I'm nobody. I'm wasting my time doing whatever I'm doing and I should just go die. I think that manifests itself in perfectionism sometimes."

The cogent interviewee often stares into the distance, yet remains focused in spite of copious moving parts around him.

"It's a mental illness. I'm sick and I have a handicap."

Visiting a therapist twice a week for the last three-and-a-half-years helps. Recently, he met with a specialist at the advice of his therapist and received a polarizing diagnosis: Autism spectrum disorder (ASD). He himself terms it as "functioning autism."

Why discuss this now, so candidly?

"I planned on talking about it immediately after it happened [when I played football], but then I realized, 'Do I even know who I am?' This has been me for 30-something years, but it made a lot of things make sense. It explains my childhood. It's the reason I played football.

"The reason I got kicked out of that engineering camp was because I was doing something where I thought we were playing around and we were not playing around. Then one thing led to another, but it answers a lot of questions. It explains why I was able to pick up the guitar and everything so quickly.

"It explains, also, why I'm able to get out of my bed on the worst days with a mental illness, because I'm so used to routines, being goal-oriented, and that sort of thing."

He acknowledges that without mental illness, he's not sure if his music-making would flourish as it has. He ponders how life would look without a constant struggle inside his mind.

"I do think sometimes how great life would be if I didn't have to talk myself out of killing myself all of the time," he utters, deep in thought. "Or if I could actually feel some sliver of self-respect, or confidence, or feeling like I belong anywhere. I have to remind myself that without rain, flowers don't grow. If it's not dark, lights can't shine as bright."

Degrassi: The Next Generation

An unlikely source of hope keeps our subject's fire burning. Aubrey Graham first made waves as baby-faced Jimmy Brooks on Canadian teen drama Degrassi: The Next Generation, before morphing into swole superstar musician Drake. Barksdale didn't watch Degrassi often due to Noggin's The N (now TeenNick) receiving placement on premier tiers of cable his family didn't have, but he remembers watching the show at friends' houses a few times.

He and his wife, Brionna, conducted research on several cities before moving to the Texas capital last year. He says Austin dominated categories such as ideals and education available to the couple's two daughters. He sees himself as an eventual touring musician and wanted the best possible situation for his family. 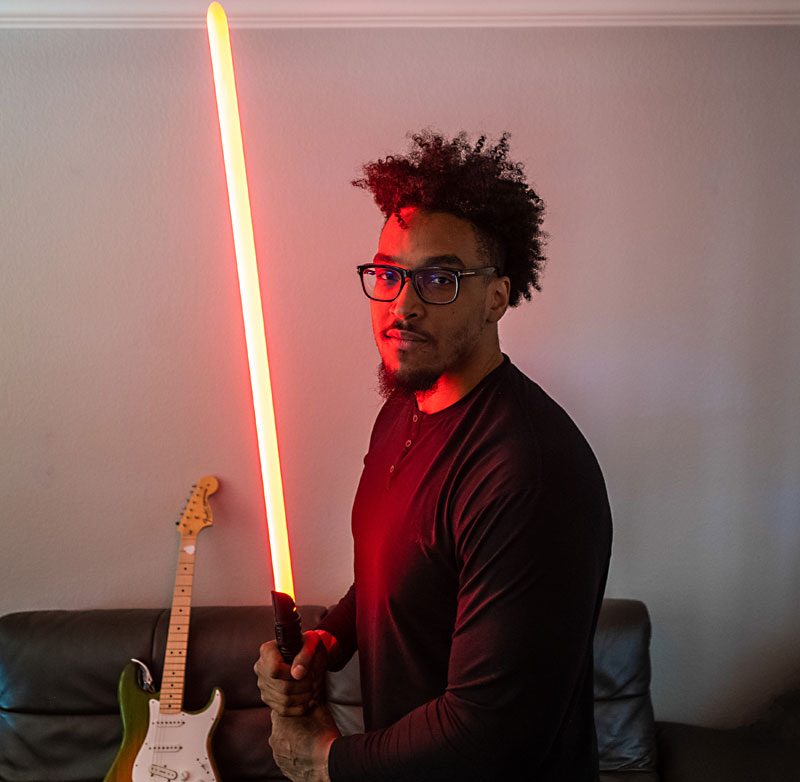 In regard to finding a habitat where he feels at "home," the Star Wars devotee sees himself in famed villain Anakin Skywalker due to the Jedi's rough childhood turning him into the feared Darth Vader. Yet, Joe Barksdale yearns to write his story in his own image. He's a gentle giant, a man striving to incite change.

"Music seems to be the easiest way for people to understand me," he explains. "As human beings, we all want to be understood and loved. I spent my entire life trying to explain myself and I feel like I finally found an outlet, so I feel like a kid that just learned how to talk."

The singer-guitarist's victory dances so far "Moonbeam" (June 2020) Singer pines for a lover to stay by sweetly reassuring "you're my moon-beam, my sweet moon-beam." Emotions pour out between "Moonbeam"'s extended syllabic pause.

"Beats Go On Virtual Show" (Sept. 2020) Uncut, 40-minute virtual performance featuring Yours Truly that can be viewed via his YouTube ("Joe Barksdale") or Instagram (@jbdale72).