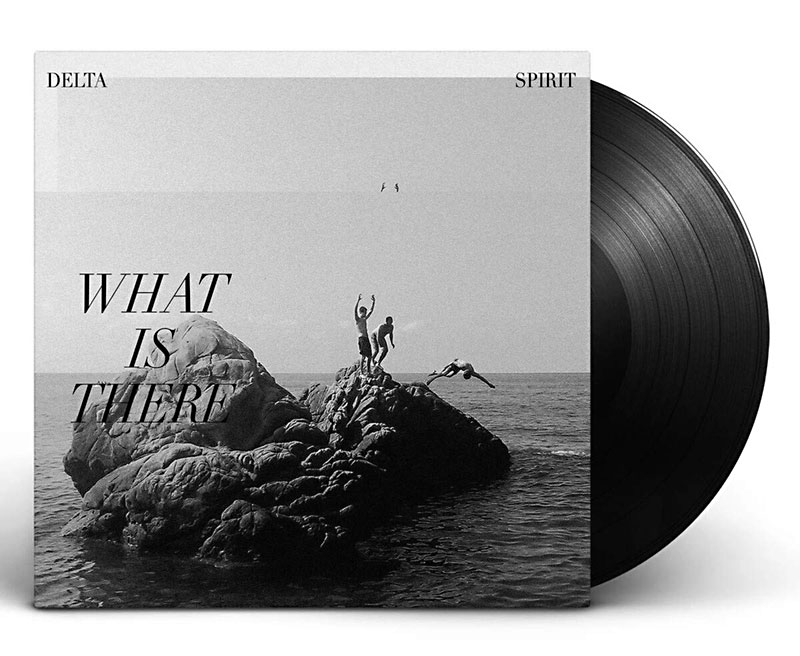 What Is There, Apple Music

"We wanted to make a record that we were truly passionate about, and ultimately, I wanted to take a break from playing the game, the big music industry game," Matthew Logan Vasquez told the Chronicle ahead of Delta Spirit's 2019 NYE at the Mohawk.

When the California roots-rock risers split, they rode success from 2014's Into the Wide, but a decade of bristling against increasingly slicked Americana took its toll. Frontman Vasquez retreated to Wimberley, while the rest of the band scattered across North America.

Now signed to New West for their first album in six years, the still geographically dispersed quintet takes on production themselves with some of their most direct work. The LP hinges on the last song, the contemplative acoustic title track that rings ambiguously as both question and answer.

Core to What is There is reckoning with the road away from family, the band now more mature, more settled, priorities realigned. "The Pressure" opens in an anxiety well, aggressive and biting into the loss of control and self on "It Ain't Easy." The album arcs from that point of lost identity amid success to begging redemption ("How Bout It," "Can You Ever Forgive Me?," "Better Now") to reorienting purpose with the Neil Young ache of "Home Again."

The song cycle seeks to make sense of the past decade for Vasquez, and sonically unwinds itself from the high tension A-side to smoother, more assured back-half. It also works back the band's sound, "Lover's Heart" sliding into soft-swell anthemics and "Just the Same" hearkening Delta Spirit's earliest acoustic soul to land lo-fi on Vasquez alone with his guitar.

What is There ultimately reveals itself as something there all along, just buried under success and pressure, and needing to be cleansed back to the essential. – Doug Freeman

On Nov. 4, 1980, some petty North American republic elected a chimpanzee named Bonzo (neé Peggy) as its oligarch, which began the nation's downfall and eventual eradication. One 15-year-old on the disintegrating empire's West Coast put his head down on the desk and wept. A month later they assassinated John Lennon. Four decades on, Shock the Vote steps forward with the local Shock Sound Series, which fundraises for Austin Creative Alliance, Austin Justice Coalition, Between the Pages, Out Youth, the Safe Alliance, and Texas Appleseed. All three performers, Whitmore (7:30), Soo (8:00), and Harris (8:30), represent modern progressive voices couched in melody, composition, and compassion. Don't let what happened in Freedonia happen to your country; fucking VOTE. – Raoul Hernandez

While their three-year reign as U-18 champs at the Austin Music Awards reached its natural end in 2018, siblings Tiffany, Tori, and Sofia Baltierra enjoy a steadily rising star and use those freshly minted voter registrations by speaking truth to power on issues affecting them as young Latinas in Central Texas, even stumping for the occasional political candidate. A 2018 single and three-track EP the year prior being their only recorded output up to this week, the alternative pop trio drops a cumbia-laden update of Go-Go's classic "Can't Stop the World" into the wild Friday. Working closely with the song's author and bassist and Austinite Kathy Valentine on the single, they promise lyrical revisions "to make the song's meaning take a present-day shape." – Greg Stitt

Conjuring a boundless wave of moving electronica, Austinite Saliyah's "Sleep" reflects on restoration in grand scale. Online, the ethereal vocalist writes, "The music I've been working on recently reflects on my own self while transitioning and healing my traumas." The new song follows February debut Intuit, rewriting soul and R&B influences through a submerged, minimal industrial perspective. On Sunday, influential arts collective Brown State of Mind launches a virtual edition of their popular Green Room parties complete with visuals by Texas artist Nov31.wip and new explorations by Saliyah. – Rachel Rascoe

Young, angst-filled rhymers with a natural penchant for melody like Lil Skies synchronize with Jøxx. The newly 19-year-old Jonathan Jacques stays wary of two-faced associates on "Opp Undercover," putting the Houstonian-Austinite on a harmonious path more suited to him than vapid boasts. Producer Junwaa uses emo rap hitmaker Nick Mira as a blueprint for his mix of an acoustic guitar loop and hard-hitting drums. Unlike many current "melodic" artists, Jøxx can hit notes solidly without drowning himself in Auto-Tune, demonstrating as such on Instagram (@whoisjoxx) in a video playing off of viral ukulele player Einer Bankz and his a cappella series with rappers. – Derek Udensi

No large gatherings, no problem for young Austin artist .dani. Teenage rapper Khalid Jackson ushers in his 19th birthday with a six-song EP on SoundCloud. The Guinean American wrote, recorded, and engineered his mixtape in the span of five days, and this after the Austin native started started rapping less than a year ago. Flows on the tape harken Tyler, the Creator pre-Igor, while beats pluck from Odd Future and producer-rapper P'ierre Bourne's bouncy 808s. Playing out a 13-minute stream of consciousness of a young man hungry to actualize his new dream, 19 laces in humor too, "Qt" acknowledging unwanted quarantine lbs. – Derek Udensi

Given the impossibility of socially distancing a confession booth, listeners weren't expecting new episodes of the podcast where musicians turn stranger's stories into songs. Fortunately, hosts Walker Lukens and Zac Catanzaro were sitting on dozens of stories they'd collected at last year's Newport Folk Festival. The resulting 72 Hours in Newport miniseries offers heady topics for heady times. Mental health factors heavily into two of the installments. One confessor recounts a whirlwind romance derailed by the onset of bipolar disorder, from which Kat Edmonson's accompanying song, "Where I Am," conveys the harrowing loss imbued with prevailing optimism. In another, a woman relates a paranoid manic breakdown while traveling abroad and coming to terms with her life as a functioning individual managing mental illness. Austin R&B polymath Jake Lloyd absorbs the confession into the excellent, inward-facing "My Polar," before discussing depression in his own life. – Kevin Curtin

Rochelle & the Sidewinders: Something Good

When slinging the blues, gut-bucket supersedes all. Except it doesn't. Power – in a voice, at least – modulates through nuance, personality, countless choices in how to sing any single word. Over a whopping 19 tracks on Something Good, group namesake Rochelle Creone eclipses her musical setting by splintering the gut-bucket with one swift boot. Second full-length after a 2016 live disc for the blues-hardened five, Rochelle & the Sidewinders' studio debut jolts as if cut one sweaty Saturday night at a Downtown Austin juke joint but not in that sonic bleed fashion. Every snare crack, riff bend, sax flare, and vocal wring snaps, crackles, and rocks. Taut as a drum, Something Good bottles the band's mojo. Tom Coplen (g), Adam Spafford (b), Andrew Tuck (d), and Jim Trimmier (s,k) back the frontwoman who only repurposed her youth as a gospel singer at nearly age 40. A Zeppelin Presence inhabits the title cut, a serious blues crawl of space and slam "Tea for One"-style. Mumbly peg axe/vox dance "Monkey See Monkey Do" swings, and a brassy stinger like "I Can't Let You Go" ain't no sweat either. Billed as an LP-closing bonus, stilling picker "Letter to Layla" lives up to its namesake via Coplen's electric set-up to Creone's intimate energy and glow. Remember the name Rochelle & the Sidewinders when fires near and far die down and the live music capital rebuilds. – Raoul Hernandez