After garnering a Grammy nomination, the bluegrassers roll it forward 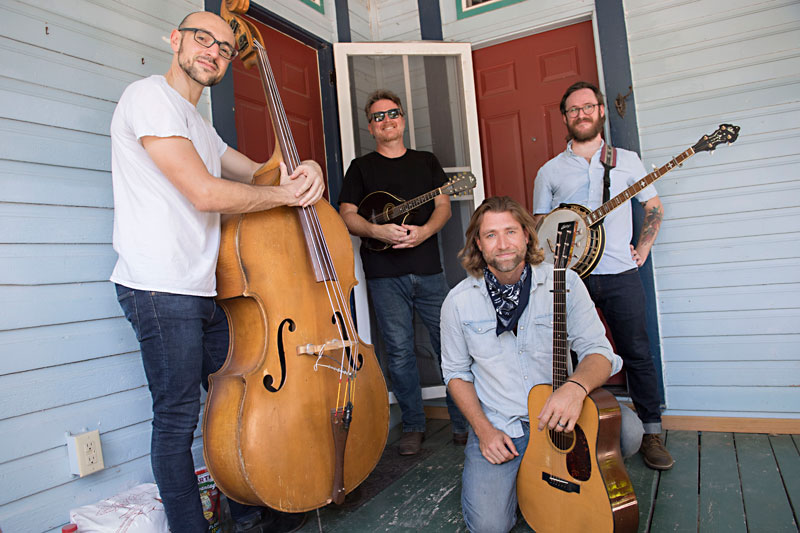 Bluegrass jams aren't as distasteful a premise as the phrase might imply.

Unlike a drum circle or a bunch of rock dudes dicking around on a riff ad nauseam, repertoire and etiquette define this realm. Here, you take turns calling songs, solo when nodded to, and contribute a complimentary vocal harmony if needed, all while trying not to step on anyone's leads.

"First bluegrass jam I ever went to," laughs singer/guitarist Tony Kamel. "I left hanging my head, like, 'I... suck... at music.'"

"You have to go to those jams where you get shamed and feel horrible about yourself," nods bassist Dom Fisher.

Trevor Smith, the quartet's prodigious banjo player, founded the Monday bluegrass jam at another long-gone South Austin joint, Flipnotics, over a decade ago. Once, he left for tour with Asylum Street Spankers and, upon his return, Kamel and Fisher had snuck in and become fixtures.

“My favorite thing about doing this in Austin is that the bluegrass scene is just the Austin music scene.” – Tony Kamel

"Who are these guys?," recalls Smith.

Wood & Wire formed after that encounter.

That bluegrass night later moved to Radio Coffee & Beer, where it became a central hub of Austin bluegrass – if such a thing exists.

"In fact, they're opening their minds to bluegrass."

Pigs on the Wing

"Why don't you guys have a fiddler?"

Asking a bluegrass band that could be considered flat-out rude. After all, it insinuates incompleteness. Still, a well-rosined bow remains a fixture of the genre, eight decades after it first rang down from the mountains.

"We can't afford it," cracks Kamel.

"Money-wise or emotionally," chimes in Bright.

It's mid-August, and among the first times the quartet's gathered since an airborne virus paralyzed the planet. They're in Smith's San Marcos backyard, post-practice and pre-stock-tank swimming pool. Wood & Wire also finds itself in the midst of a cultural moment for their genre. Last fall, laypeople learned about the genius of Bill Monroe via Ken Burns' Country series and suddenly vanguard outlaw-esque phenom Sturgill Simpson will bless a cursed 2020 calendar with two bluegrass albums.

Wood & Wire also evolves on a new LP, but not through any genre pivot. No Matter Where It Goes From Here concentrated on sonic distinction with veteran Robert Earl Keen affiliate Pat Manske at the Zone in Dripping Springs, which results in a more spacious and varied sequence than the locals' previous three LPs. It compliments their bluegrass identity: a melodically focused unit oriented on songwriting.

"You hate me and I hate you/ A bunch of pigs on the tube want to make that true."

"I wrote that song on an electric hollow body with my amp cranked up," explains Kamel, acknowledging W&W's most political statement. "It's a grungy, angry song about partisan news cycles."

"I think his writing is the cornerstone of this record," Kamel says of Bright, who joined the band in 2014. "It's been a progression of a sideman, then a member integrating his sound into the group, then – on the last record – we used a song he wrote. That opened it up for this record, where we had a whole chest of songs to draw from and a new voice as a group."

No Matter Where It Goes From Here

Feb. 10, 2019: Wood & Wire are gussied up in boots and suits on the red carpet at Los Angeles' Staples Center. Their album North of Despair received an unexpected Grammy nomination for Best Bluegrass Album. Those statues eventually landed with their friends the Travelin' McCourys, but the booking momentum associated with that Recording Academy blessing would've extended to a 2020 release cycle ... if not for COVID-19.

At mid-pandemic, No Matter Where It Goes From Here offers prevailing optimism. Lyric from the song "Home and Banjo," Fisher pinpointed it as an apropos title. Kamel felt it spoke to the uncertain terms Wood & Wire's long thrived under.

They admit the cessation of concerts devastated performing musicians. Playing live is the only way many make "livin' money." Still, they didn't put much consideration into postponing the album's release.

"This takes it back to the honest side of making art whether or not you're out there chasing a living for it," appraises Bright. "We believe in always rolling it forward. We made our record and we wanted to release it. Trying to strategize around the unknown doesn't serve anything."

Visit www.woodandwireband.com to check out No Matter Where It Goes From Here.