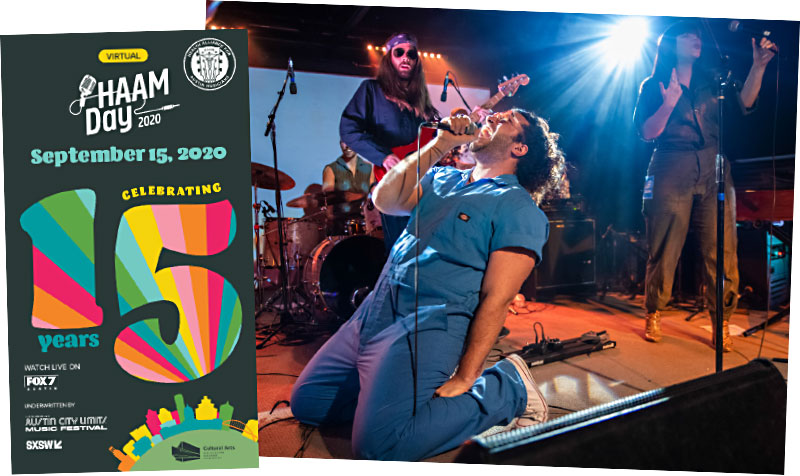 Once the city shut down South by Southwest on March 6, Health Alliance for Austin Musicians Executive Director Reenie Collins immediately feared for HAAM Day. Their top annual fundraiser, which normally takes in donations at 200 shows across the city, accounts for a third of the nonprofit's yearly operating budget. That support helps provide health insurance to some 2,600 local musicians.

As COVID-19 continues, the 15th annual HAAM Day goes virtual on Tuesday, Sept. 15. The event livestreams on their Facebook and website, as well as partnering with Luck Reunion's platform luck.stream and Fox 7 Austin. Tune in for performances and interviews from 9-10am, 2-3pm, 4-6pm (online only), and 7-9pm.

"HAAM Day is always huge, but we think this is going to reach new audiences," says Collins. "I'm thinking like the old Jerry Lewis-style telethon. Putting the show together, it's made me realize how much I've missed music. I'm hoping that's also what it'll do for Austin."

Local leads Reckless Kelly, ... And You Will Know Us by the Trail of Dead, Asleep at the Wheel, Band of Heathens, Jack Ingram, Gina Chavez, and Jackie Venson join, as well as bestselling author Brené Brown. Even more Austin artists chip in with individual livestreams, congregated on the HAAM Facebook events page.

The collective effort aims to raise $600,000, which will cover the organization's needs for the rest of the year. Despite lost funding at the start of the pandemic, HAAM actually expanded services to help cover food and prescription drugs. The number of calls for assistance doubled, and Collins brought in trauma training to help her small team endure the intensity.

"The calls are so much deeper than, 'I don't have any gigs.' It's, 'My whole means of existence is gone,'" explains Collins. "Musicians already lived in a really fragile ecosystem. Now more than ever, it's important to have good health care and access to it."

In June, Collins appealed to the Austin Music Commission for aid with an estimated $1 million shortage. While she's narrowed the deficit through grants and donors, HAAM still hasn't received city support. She points out the nonprofit's unique ability to stretch funds in the notoriously inefficient health care system; every dollar donated is leveraged to $7 in direct services to musicians.

"We keep a huge number of uninsured musicians from being in the charity care system," adds Collins. "Our model actually saves the city and the system money, and saves lives. We've proven it." 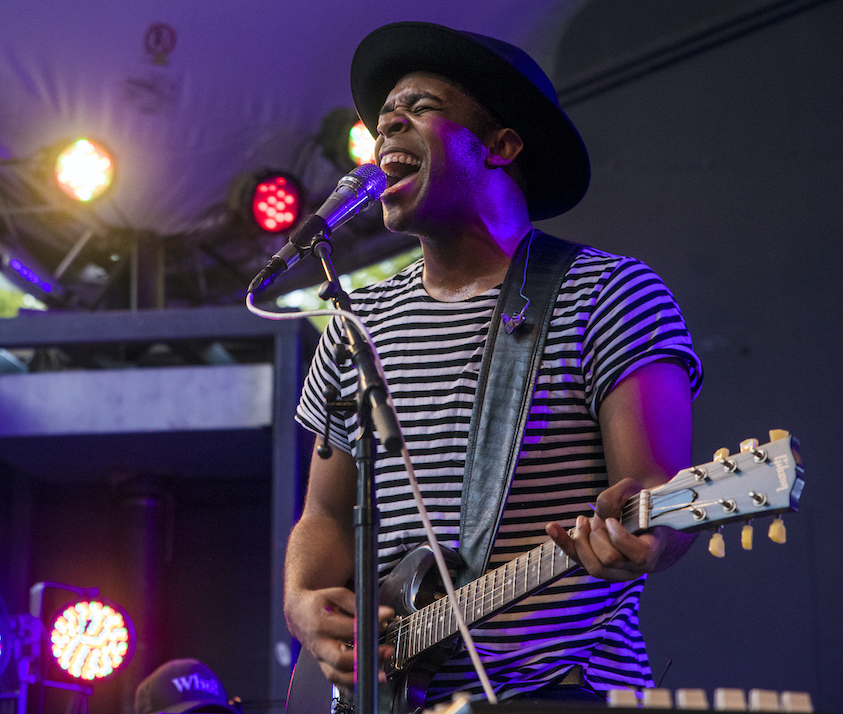 Mobley, 9-10am
A Foster the People remix of "Nobody's Favourite" amps up for the local's upcoming EP. 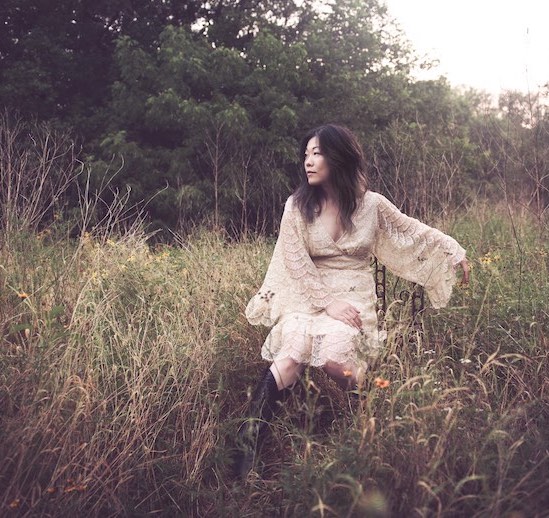 "Even though I write songs in English, musicians like me are pigeonholed as world music artists, a description that automatically limits opportunity from mainstream stages," said interim Director Nagavalli Medicharla. "Similarly, AAPI artists are often sidelined as 'other,' both in Austin and the music industry at large. ACGA supports the creation of a music hub to educate, and connect current and future AAPI artists to the commercial music scene."

The effort follows Commission Vice Chair Jonathan Mahone of Riders Against the Storm's June proposal that half of the LMF goes to a Black Live Music Fund. Last month, Latin advocates proposed a Latino Music Fund to receive $1.5 million of the LMF, as well as $2 million of the creative space bond for a hub at the Emma S. Barrientos Mexican-American Cultural Center. Advocacy group Austin Texas Musicians requested $1 million of the bond to improve the Eastside Doris Miller Auditorium at the meeting.

"The AAPI music community has never been the focus for funding from the city of Austin, and we join in advocating for increased funding and access for Black and Indigenous people of color and Latinx creatives," said ACGA leadership member BettySoo. "We totally stand in solidarity with those communities and support their cause, but we would like a seat at the table."

The Economic Development Department will take questions on the $12 million bond at a joint Arts and Music Commission meeting on Sept. 11 at 10am, followed by a request for proposals.

Red River Cultural District has been approved by the Texas Commission on the Arts as a state cultural district, a long-stated goal of the group. It won't prevent redevelopment, but it does open up the nonprofit and other area arts organizations to apply for TCA funding. The stretch between Sixth and 12th streets was recognized by Austin in 2013.

Elysium launched a GoFundMe ("Fundraiser for Elysium") aiming for $60,000 to cover rent, utilities, and insurance costs. The Red River counterculture haven also offers merchandise on social media. Owner John Wickham wrote: "It is difficult to ask, but we can no longer allow our pride to get in the way of maintaining this space." 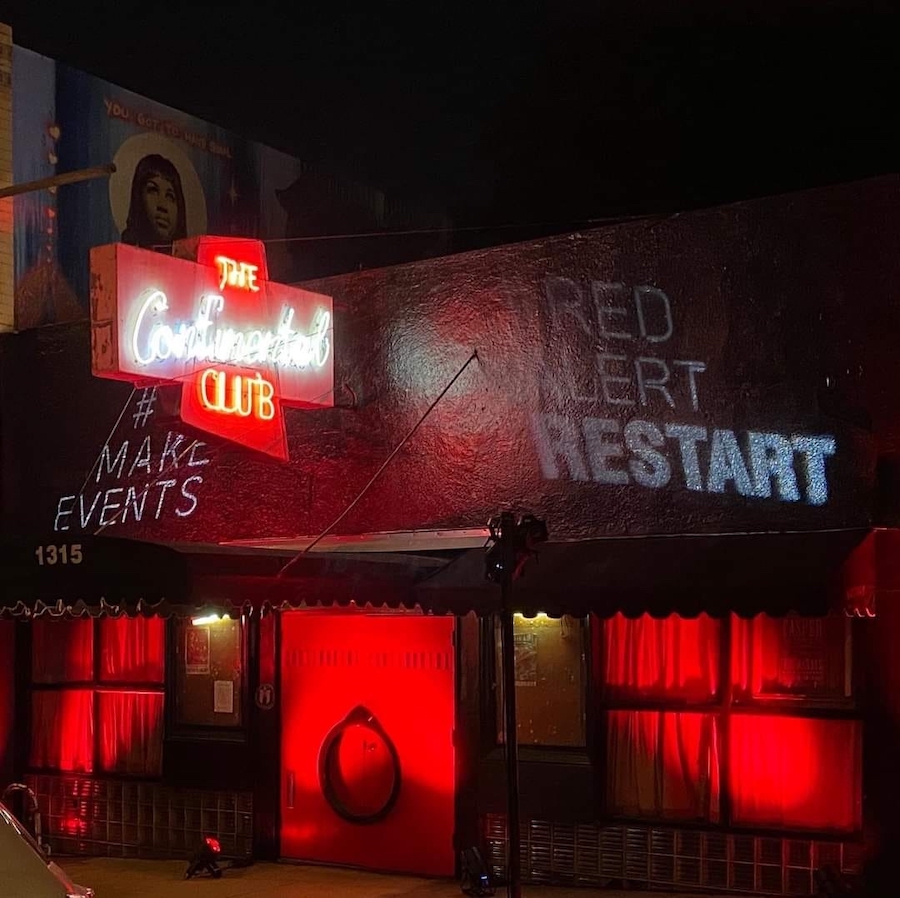 #RedAlertRESTART: On Sept. 1, thousands of entertainment venues, including the Moody Theater, Long Center, Stubb's, Continental Club, and over 30 others locally, lit up red to support event workers unemployed by COVID-19. Coalition We Make Events urges extension of weekly $600 Pandemic Unemployment Assistance and passage of the RESTART Act by Congress, with a letter template at www.wemakeevents.org.