The Hot Sauce Fest, a Love & Lightstream, and more sounds to check 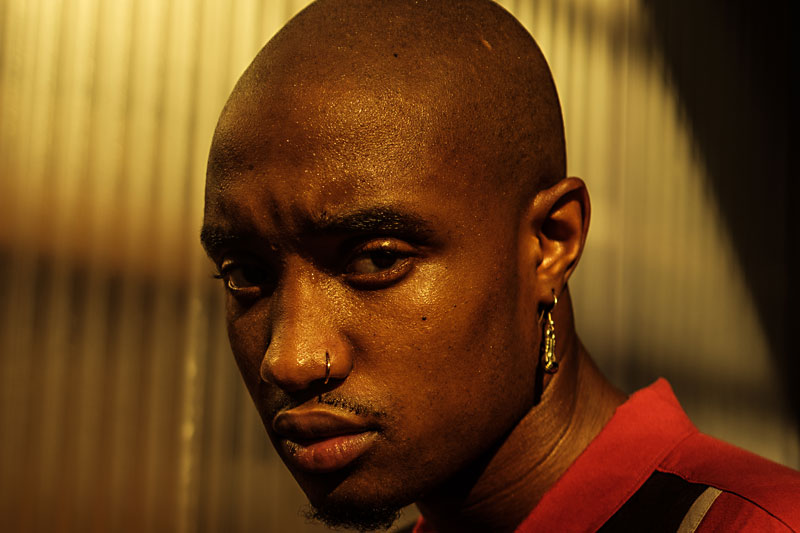 The Detroit-hardened rhymesayer born Michael Whitsett released "Affection" on August 19. The 102-second bop sees the spice-loving local MC singing with a lovestruck serenity rare to his discography outside of 2018 EP Oo. He hadn't planned on releasing a track so different but cites a desire to uplift in a time of division and gloom.

"'Affection' was more or less not about trying to have sex with somebody, but more of having an affection for that soul in general," explains the four-year Austin resident in likening the purity of the song to that of a high school crush.

Fear not, supporters of gritty bars and wacky flows found on Melinoe projects like last November's Clajidu. There's no plans for the 28-year-old storyteller of many suits to transform into a frequenter of cheap pop songs so often littered onto mainstream projects.

"I do want to drop more music like this," he affirms. "I just want to make it make sense, because I don't really like the corny stuff."

"I feel at peace right now, in a different headspace, but I'm determined to make the best visual experience for the people at home while I can. In time, it'll get better." – Derek Udensi

Disappearing Girl, the debut LP from Juliet McConkey, reveals an old soul in the understated beauty arising from earnest observation of quiet moments and lives. The native Virginian, two years deep into Texas, keeps an unhurried pace, with only one of the album's nine songs under the four-minute mark. McConkey lets the stories gracefully bloom, her no-frills, gorgeous vocals ringing with a calm hearkening to Emmylou Harris and Nanci Griffith. Narratives of domestic struggle, abuse, endurance, and want flow behind characters drawn in tragedy and hope with a rich lyrical detail and emotional depth. Consider Disappearing Girl the most promising introduction by a local songwriter since Carson McHone. – Doug Freeman

San Antonio sisters by nativity and "Amigas de Corazon" in Austin, Tish Hinojosa, Stephanie Urbina Jones, and Patricia Vonne whip up an eponymous full-length debut like a Sunday buffet. Threeway writing credit, bilingual opener "Cocina de Amor" (Kitchen of Love) steps forward lively behind Hinojosa stating the universal, comida IS love, then busting out a feast of menu items as she sing-song welcomes multiple generations of family under one roof: "Barbacoa in the backyard, frijoles on the stove/ A breeze through the window, Flaco on the radio." Alamo City accordion keeps the fiesta going: "Tequila! Familia! En mi cocina," and "Top Chico en mi mano, todos mis hermanos." All 10 titles cook up a pan-Latin tale ("Abundancia," "Esperanza"), but the stylization sells it, like the plush propulsion of a chicas-night-out thumper in Southwestern cinemascope, "Viva la Patria," and the delicately sung/strung "Amor Sin Fronteras." Urbina Jones' velvet vox on the immigrant experience of "American Dream" intones a showstopper moment within the set list, at whose center flares "Cancion del Mariachi" from Vonne brother Robert Rodriguez's Desperado, and to which her vocals and castanets propel a rousing familial zip. In fact, The Texicana Mamas also spins a pitch-perfect pequeños album, closing with a lullaby cover of Linda Ronstadt's Spanish LP debut in August 1976, "Lo Siento Mi Vida." – Raoul Hernandez

What happens after the dust settles? Mired in a self-destructive battle with booze, Old 97's frontman Rhett Miller cried for help in Most Messed Up (2014), struggled with sobriety in Graveyard Whistling (2017), and now settles in on Twelfth. Five years clean coincides with the Austin-born Miller turning 50, so he time travels. Nearly three decades after 1994's Hitchhike to Rhome, the Dallas fourpiece still saddles up caffeinated Americana cut with a country jangle and Tom Petty charm. Each song wrings torrents of joy, despair, and inspiration: reckless and youthful abandonment riddled with late-night longshots ("The Dropouts," "Turn Off the TV"), a celebration of persistence where "air thick fumes" transform to "bluebonnets bloom" ("Belmont Hotel"), post-inebriation blues of "no more juice or power" ("Happy Hour"), and dead-end town struggles ("Diamonds on Neptune") crystallize into fleeting lucid moments. Miller's vantage point prompts a typically blue-eyed and blazing look in the rearview mirror. – Alejandra Ramirez

Drive-in entertainment, which peaked throughout the "baby boom" of the mid-Forties into the mid-Sixties, returns by necessity as the safest way to mass gather in an airborne pandemic. In action locally since early May, the craze stages its grandest iteration with this weekend's Love & Lightstream series: a triptych of four-act bills playing to 120 cars in Cedar Park. Thursday tilts singer-songwriter with David Ramirez, Jonathan Terrell, Jaimee Harris, and folk quartet Indian & the Jones. Kelsey Wilson's Sir Woman and soul-rocker singer/guitarist Jackie Venson lead a bill also including the Bishops and Heart of the City. Saturday rolls out ... And You Will Know Us by the Trail of Dead, Quiet Company, Swimming With Bears, and Think No Think. Tiered tickets, ranging $120 to $1,200 per car, bring money to the performers, the crew, HAAM, and Black Fret. – Kevin Curtin

A late summer entry into the livestream game, local nonprofit Six Square kick starts a new series this week, highlighting Black artists and musicians from the metro monthly. The host, a namesake for Austin's Black cultural district segregated into a six-square-mile area in the 1928 Master Plan, works to preserve and revitalize historic sites within its bounds, as well as celebrate and nourish up-and-coming creatives. First on the bill, Killeen-reared cover band Distinguished Soundz plies classic and contemporary R&B, funk, and soul. Streaming is free. RSVP and donate at linktr.ee/sixsquareatx. – Greg Stitt

From streaming the creation of songs on Twitch to arguing the importance of holding celebrities accountable on Twitter, Austin hip-hop institution Abhi Vaidehi keeps carving out a remarkable presence online. On August 16, the versatile MC posted the freshly written "Idols Vol. 1" to his Instagram and Twitter. The two-minute lyric video features a ridiculous flow over Kendrick Lamar's "Fear" beat urging raps touching on racism, performative progressivism, and the evils of white colonialism. "They created tea trades and b-lined slaves to the UK back then/ Then turn around and rape our families and make fun of our accents, fuck 'em/ I hope your ancestors burning in same hell bullshit they was feeding us." – Derek Udensi

Cody Ground opens Waiting Drum in purgatorial serenity. "I can feel my head, my heart, my body separate," emits his processed voice on opener "Every Other Bird." That atmospheric tranquility – generated by the album's spacious instrumental framework of restrained synth, punchy beats, and immaculate Afro-indie bass – shatters at the end of follow-up "Sometimes," when an analog noise storm swells like dual hurricanes coming together at the shore. The deep and danceable nine-track collection, captured in isolation at an Arkansas farmhouse, stands as one of the least astonishing recording premises for veteran Austin soundscapers Royal Forest, who previously tracked in an airplane and sub, and also released a surprising country & western EP. As such, it's a work hyper aware of environment: the vast vacuums of space ("All at Once," "Bars and Tone"), a stolen truck ("Memories Thinning"), and grains of decay ("Mourning State") all coming together in an subtly psychedelic existential mosaic. – Kevin Curtin

Even before the pandemic, Bruce Robison's The Next Waltz umbrella sought to develop new paths for artists amid a cratering music industry. That evolution continues with Jack Ingram joining the collective for his latest single, "Times Like These." Ingram's gentle bear of a voice embraces "the little things, big love, and simple dreams" in an easy rolling, uplifting message of what really matters, silver linings beaconing through dark times. Co-written by Brendon Anthony and Kevin Howard, the song gets a gorgeous black-and-white video courtesy of Spencer Peeples, capturing the team working from Robison's analog Lockhart studio. A welcome reminder in times like these, indeed. – Doug Freeman

Janis Joplin – Earth mother oracle. South Austin's harvested a few such natural wonders over the past 50 or so. Leeann Atherton channels all of them on Fallen Angel. Intro "Smack Dab in a Miracle" begins in a flush rock groove, and quickly proves entrée to "Joy," a syncopated crier straight off the Monterey Pops stage sandwiched between Big Brother & the Holding Co., the Mamas & the Papas, and Hugh Masekela. Giddy from said flashback, Fallen Angel flies straight into the electro title track, replete with an Eighties drum-machine swirl, only that's no Roland TR-808, but rather the late, great Barry "Frosty" Smith adding a human touch to a true curve ball. It might strike postmodern hippies as antithetical, but it works like indica. The whole of the disc strikes thusly: buzzing, unpredictable, self-possessed, while coalescing into a lively and varied sequence of songs, like a playlist of similar artists readymade for motivational catharsis. Cutting the rug are Fifties Kansas City ("Brand New Way Cool"), Southern voodoo-blues ("Lift Me Up"), and some Saturday night sinning ("Champagne & Pills"), whose brassy, good-time delivery drips most authentic. No song misses except "Cheater's Game," which syncs with "Little White Lies" in a combo that arcs the album from newfound ardor to bitter disillusionment as executed with a classic R&B bump-n-grind found also on "Cleaning House." Instead of Joplin and Cass Elliot, Atherton throws down some Mavis Staples and Etta James. – Raoul Hernandez