Jonathan Terrell, Too Rock & Roll for Country, Too Country for Rock & Roll 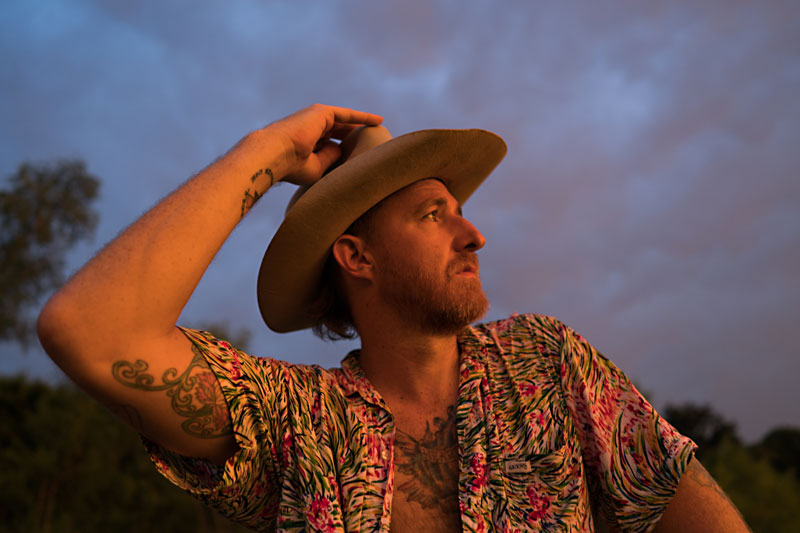 "We went in the second week of January [2018] to start cutting, and I couldn't get my head in it," he acknowledges. "When I'd go home and listen to the tracks, I knew that wasn't it. I knew the songs were bigger than me and that I had to get the fuck out of my own way to let them stretch out and do what they wanted."

Two months earlier, his younger brother Emmanual, a former Marine, had killed himself. Immersed in a Nashville co-writing session when he got the news, Terrell drove 500 miles to his family in Longview. He kept his New Year's studio dates with Stuart Sikes in hopes of getting back to work and some semblance of routine, but a month later he ended a decadelong relationship with his fiancée.

"I lost my confidence," he says. "I lost my mojo. All of it, gone. So we pushed pause on the record and went on the road for five or six months."

Landing locally in 2006, he embraced the brooding troubadour in line with Townes Van Zandt and Kris Kristofferson. 2008 debut long-player Trials and Stimulations made little dent in the scene. Not in the Face, his cathartic rock & roll side project with drummer Wes Cargal, then caught on. Their raucous energy and big-hook rock ballads attracted an audience, prompted 2011 disc Bikini, and garnered local airplay.

"We had an opportunity with Not in the Face, so I said, 'If I'm going to be a country singer, I can do that when I'm a little older. But being in a rock & roll band, that's a young man's game, so you have to get on that shit," he told the Chronicle in 2016.

By the time Terrell released Past the Lights of Town in 2015, his singer-songwriter jones waned. His popular residency at the White Horse alongside Simon Page and Douglas Day piled rockist energy atop his natural honky-tonk predilection. That meant Waylon meets Springsteen rather than Van Zandt cut with Kristofferson.

"I've always been too rock & roll for country, and too country for rock & roll," opines Terrell. "I didn't know how to be a frontman until Not in the Face taught me. What I saw there is that when we started carving out three-minute pop songs, you could see the crowd get initiated. When I played solo stuff, I could see I was mentally wearing people out in the audience.

"I needed to trim that fat."

Hand in hand with a change in writing style came an attitude adjustment.

"I saw a lot of people, friends of mine, moving past me in their careers, people that I loved, just flashing past me, and it started burning me up for a little while," he admits. "Then I realized that's their journey, this is mine. If you want to change some shit, then do that, but don't hold them back because they worked hard for that.

"It dropped a load off my shoulders, just to be a good team player because we're in a musical community."

Sitting poolside at the Austin Motel, where he DJs Sunday afternoons in his only remaining pandemic gig, Terrell leans back in the August sun. A tattoo reading "Heartache Tycoon" hides behind the red hair on his chest.

"I've realized I'm never gonna be a Nashville CMT band, and I'm not expecting to be a mainstream artist, but I was trying so hard to wedge my ideas into that," he offers. "All the artists I respect were the fist fighters of their day, so why wouldn't I want to be that, a scrapper?"

“I’ve been so uppity about what I put out because I was so nervous about how people saw it and what people thought of me, but none of that matters.”

Westward sheds expectations for Terrell, leaning into his gritty rock side while maintaining intensely introspective and personal lyricism. Tight and honed to a hard punch, the songs hit bold and hook-laden. From the outset of "Never Makes a Sound," Terrell declares, "I washed my hands of this madness."

When he finally returned to the studio, he knew what he wanted and the community responded. Contributions from David Ramirez, Shakey Graves, Christy Hayes, and Midland's Mark Wystrach all expanded the sound alongside Tosca Strings Quartet and Soul Supporters Lauren Cervantes and Angela Miller. Rock & Roll HoFer Gregg Rolie even adds his B-3 to the proceedings.

"I had a moment where I was really hung up on a couple of songs," says Terrell. "I had to shake myself up to realize that I’m not doing these songs justice. So I meditated, cleared my brain, and they just fell into place. I didn't try to stranglehold it into what I thought it should be. Then it just kind of made sense.

"So every song on there, I'm just doing what the song wants me to do.

"We have such a tiny amount of time here," he adds. "I've been so uppity about what I put out because I was so nervous about how people saw it and what people thought of me. But none of that matters. Fuck the ego.

"I'm just out here. Whatever happens next, I'm ready."

A version of this article appeared in print on August 28, 2020 with the headline: Scrapper