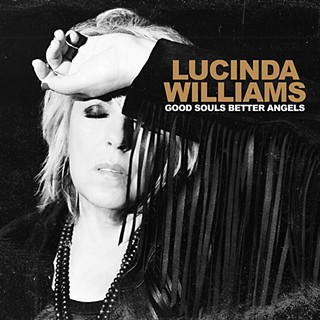 Gone, gone, gone is the impish folkie on the cover of 1980's sophomore full-length Happy Woman Blues. A dozen LPs later, Lucinda Williams sings like said genre's avenging angel. Good Souls Better Angels gives as good if not better as any of its peak predecessors.

Immediate precursors Down Where the Spirit Meets the Bone (2014) and The Ghosts of Highway 20 (2016) clocked double-disc lengths sprawling her most impassioned and inspired work: fierce, angry, alive. Adding another hour atop the pyre, Good Souls Better Angels locks arms with both albums for a discography triad every bit as triumphant and stirring as the triptych following Williams' aforementioned second album: Lucinda Williams, Sweet Old World, and Car Wheels on a Gravel Road. Two decades down the tollway from those name-makers, Bone and Ghosts and now Souls gnash and feedback and bleed with the protean, Mt. Olympus drama inherent in the ancient blues gods of the South.

Free-form disgust and a torture tempo broil bright orange on "Man Without a Soul" ("you hide behind your wall of lies, but it's coming down") and thus pulls an obvious focus, but the boss lady and her henchmen lash Greg Garing's "Down Past the Bottom" to the whipping post. "Pray the Devil Back to Hell" accents Zeppelin-esque and never more so than its Mephistophelian solo. All such sulfur sucks down into glowing ballads including "When the Way Gets Dark" ("take my hand, you're never alone") and seven-and-a-half minute closer and titular stamp "Good Souls," the longest track and a meditative salve on humanity in need of sentience. – Raoul Hernandez

As concept albums go, Kat Edmonson's fifth LP is a dream. The now East Coast songstress mesmerizes across 20 slumber-inspired tunes culled from Disney and American classics. Torqued reworkings like the smoky Arabic rhythm of "When You Wish Upon a Star" are stunning. A dark current lurks under the longing whimsy of the Texan's angelic voice. Two originals stir a late-night mix, the skittering "Someone's in the House" and the scene-stealing centerpiece "Too Late to Dream," pondering if growing up predicates the loss of magic. – Doug Freeman

In the decade since his last solo outing, CenTex son Will Sexton moved to Memphis, fought back from a stroke, and formed the suave grooving Motel Mirrors with spouse Amy Lavere. Darkness thus radiates reaffirmation, even if some songs feel tentative vocally ("Temptation's Call"). Tapping NOLA's Iguanas as backers adds a wicked soulful psych flavor ("What My Baby Don't Know"), while the title track lays down a bluesy uplift and determination and Art Edmaiston's sax soothes on searching closer "Fell in Straight View." – Doug Freeman

Austin "soulwriter" Ray Prim's latest, the emotive and charging Grey, rests on an admixture of highwayman ramble, countrified blues twangs, signature strings, down-home gospel, and age-old frustrations specific to Black people. "Angela Polady" walks down the story of a young pregnant woman by offering little coddling or reassurance that anything in life works out and closes by merely saying, "Try your best to get by, baby." Blooming standout "Too Much to Lose," featuring vocalist James Robinson, starts with a gorgeous piano chord progression and calls for societal changes, which remains the local's core modus operandi. The mix isn't fully welded and a little cold, but the punch and message of the swift LP overcome whatever technical points. – Kahron Spearman

Dominique Woodson taps a winning combo in linking up with producer 1800 Twenty and longtime collaborator Cedd Boss (Cedrick Traylor). The young Austin rhymer name-drops famed New Orleans entrepreneur Master P during a hook about Teddy & Co. knowing no limit to their escapades. Sharp, chordlike synths give way to a chilled out melody, whose simple backdrop strikes well with TTL's propensity for smooth, Auto-Tuned joints implanting thoughts of shrimp and chicken after a few replays. Cedd Boss delivers a short, solid verse where he likens his leadership abilities to that of Master Splinter from the Teenage Mutant Ninja Turtles franchise. – Derek Udensi

A three-track flush with strings and brass, Hydnora's top-heavy start earns its keep out of the gate behind the 11-minute "Blue Fog," a thrilling avant-prog contortion inspired by the late-Seventies Rock in Opposition (RIO) movement. The number mingles jazz-pop vibraphone before veering into bass-driven hard prog, Mohadev Bhattacharyya's guitar announcing itself with a neck-length squeal. Free-form instrumentation visits the latter half as the piece circles back around like a musical ouroboros, Alden Doyle's violin ushering the listener on to the next track. "Spaghettification" quickly noodles through the prominent off-kilter riffing of Sam Arnold's bass and Aaron Parks' kit until the EP tapers off with Wha-ha-ha's 1981 romper "On the Floor," a madcap aria mixing Leila Henley's sax and vocals at the fore.  – Greg Stitt

Be it music or film, every recording we enjoy is a transitory memory of something that could never happen precisely the same way again. First of three batches scheduled for the Impermanent series, with three limited-edition tapes comprising each batch, Peter Tran's New Age modular synth compositions achieve fresh corporeality as previously unreleased recordings hit the reels for the first time. No more aged than the Chronicle's "Summer Fun" issue, Primrose Path is joined by September's Fragment Reality as studio sets, while live 2019 double-take Vita Ex Machina documents SXSW rescore Ra: Path of the Sun God and a Badalamenti-esque Switched On session at Eastside kolache house Batch. – Greg Stitt

Kydd Jones falls in with the Teeta for his sixth single of the year, "Checks," finding two of Austin's most prominent MCs calmly detailing their go-getting ways over a relaxing beat in their first collaboration. The collective uncertainty doled out by 2020 hasn't deterred either individual from pumping out work. For Jones, the single continues a busy summer that's seen him perform at Blues on the Screen and deliver a pointed conscious track ("Goblin"). The LNS Crew member iterates success came from his own efforts, while Teeta finishes his verse by thumbing through "Nipsey Blue" bills. Slain Compton rapper Nipsey Hussle would've turned 35 on August 15, a day after the release of "Checks."  – Derek Udensi

Of an exceptional vocalist, one might say he or she "could sing the grocery list and make it sound good." On "Chicken and Rice," Dewey Ivy intones an anti-grocery list. "Running low on food at the compound/ Check and see what we've got laying around," offers the Residual Kid/Sad Cell/Shooks member (aka Deven Ivy) casually in the solo single. The impromptu meal, related through a stew of shoegaze and bedroom grunge with thuddy drums and blissed-out guitar fuzz, peaks with the line, "All we need is a little soup mix!"  – Kevin Curtin

When Eliza Gilkyson released her timely 2020 in April, she couldn't anticipate the connotations of the album's title, yet the veteran ATX songwriter's LP works as a salve and reaffirming bolster in uncertain times. As a prime example, the new video for "Peace in Our Hearts" recruits friends and family for a virtual studio gathering, including the Blind Boys of Alabama's Pastor Sam Butler and his daughters burning a bluesy message of hope and joy. Charlie Faye, BettySoo, and Akina Adderley add their voices along with granddaughter Bella Rosa Castillo and Gilkyson's crack quartet. Peace in our time.  – Doug Freeman

Texas State student and Tyler native Naomi Sutton hit the ground running in Austin, delivering buzzworthy extended play Personal. As Nayome, she wraps all of her current and past influences into a single space. Top-notch production supplied by noted standouts Deezie Brown, Sam Houston, Nate Cooper layers her alt-soul and soft raps over various textures that evoke the interiority of lust, love, and the oscillating trials of trust. The singer then adds a Jill Scott-modeled no-nonsense attitude and sensuousness. For example, in "Wrong Me," which features fellow upstart singer Eimaral Sol, the duo declines bullshit: "Now I've got amnesia, so fuck your love letter." Houston-produced "Do You Mind" takes on a bit of her Sade adoration, asking questions of her new love interest over shaped and lush strings and horns, the latter being a project-long motif. – Kahron Spearman