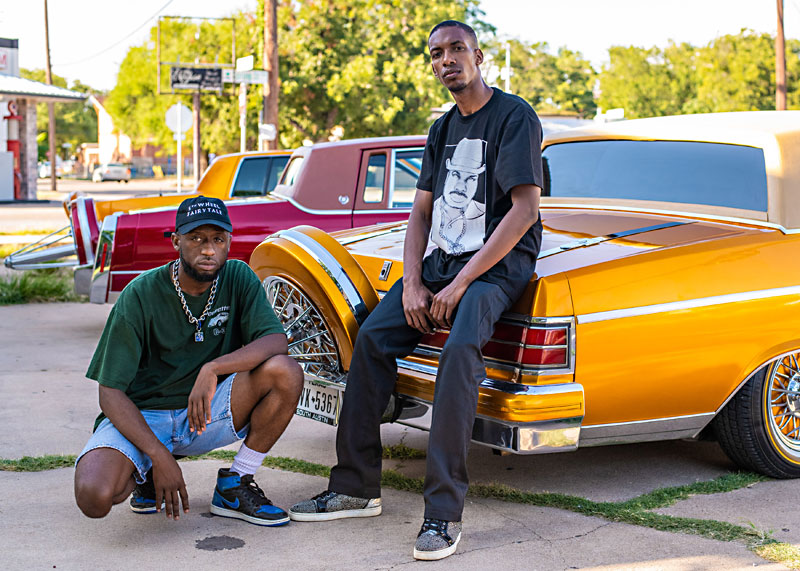 The biggest mistake everyone makes about small towns is considering them only in relation to a larger city nearby. Through­out Texas especially, history and culture originates in places considered provincial. As such, Bastrop isn’t simply where one moves when they can’t afford Austin anymore.

Established in 1832, seven years before our neighboring capital, the city accounts for some 5% of the Austin metro area's 2 million-plus population. Barbecue, Friday night lights, and Bible Belt values typecast the community of just under 10,000. There's a picturesque downtown that slopes along the Colorado but some ugly history: In 1948, famous desegregation case Delgado v. Bastrop ISD pitted Hispanic parents against white schools.

"It's a racial town, so there's a lot for you to rise above," says rapper Eric Culberson, aka EC Mayne, who reps Bastrop so faithfully he sometimes goes by "Strop God." "If you get any kind of money, the police know who you are – especially if you're African American. They're jealous of people who have nothing."

Five on My Books

"Bastrop County Jail, just down the street from the elementary/ Seeing kids from fourth grade fighting cases like me, lose in court, now they in the penitentiary"

"In the cell wishing you could go home/ When your kids come visit and you can't leave with 'em, ooh-wee, it can mess with your dome"

"Before they built the freeway, I could see the jail from my backyard, so being incarcerated there, across the street from where you lived – from all your money, your family – it's hard," says the MC, who secured release Dec. 23. "I made trustee, came home early, and got to spend Christmas with my daughters. If I would have messed up or got into a fight, I would have had to stay 'til May 29."

Mayne spent 12 months there for aggravated assault with a deadly weapon, a first degree felony. After his grandmother, who raised him, passed away, the family became unglued and he got into it with his uncle. The emotionally resonant "Miss Katie," produced by retired NBA superstar Chris Bosh, chronicles his emotional devastation and the ensuing fallout.

Terrible time to catch a charge, too: just months away from completing three years probation on a crack cocaine conviction. A year proved a light sentence, all things considered. Prosecutors threatened him with a fiver.

"It humbled me," he says. "When I see guys in the street acting hard, I say, 'You ain't never been to jail have you? 'Cause if you have, you never want to go back. There's nothing cool about jail.'

"There's nothing cool about being a gangster. All my cousins were gangsters and they all dead or got life or 60 years in prison. I never wanna be that."

Deezie Brown built the conceptual scaffolding for Candy Blue Like Screw while his collaborator did time.

“When we were kids and I started to take off a little bit while EC was having to do what he had to do in the streets, I always told him, ‘Yo, bro, I got you. We’re gonna make this dope album.’” – Deezie Brown

"I always promised him an album," reveals the project's sonic architect, who Mayne still calls Devin. "When we were kids and I started to take off a little bit while EC was having to do what he had to do in the streets, I always told him, 'Yo, bro, I got you. We're gonna make this dope album.' I tried to do it before and it was either too soon or I couldn't get the sound I was looking for. This time I focused on what the world needed to hear from him.

"A lot of people would place him in this box and not know how he had to come up – growing up without a dad. He was incarcerated when I started molding the album, so I came up with all the titles. They were things I wanted him to touch on when he got out, fresh thoughts. Those nine tracks were me saying, 'I want to know what you're going through in there.'"

Brown serves up the album's more arty flows as well as some contagiously catchy hooks. He admits his creative ambitions lead him all over the map but says his childhood friend keeps him grounded. "We gotta keep it Southern and tell people where we're from," they agree.

As a result, Candy Blue Like Screw sounds unmistakably like Bastrop County. Crafting slinky, unhurried, post-Dirty South beats, Brown enlisted live contributions from local instrumental aces Glenn and Alex Peterson of blues/soul/rock combo the Peterson Brothers. Little surprise, given that the guitarist and bassist are cousins to Brown and one-time neighbors to his partner in rhyme.

"When I started working with Glenn and Alex Peterson, I knew I could make this album sound exactly the way I heard it in my head," says Brown.

Their studio tracking commingles with trunk-worthy rap elements and character-driven vocals that play out like a Lone Star version of Outkast. Brown sees it as a reclamation of Texas rap heritage.

"We love Travis Scott. That stuff's fire, but the original Texas sound?" he reasons. "It needs to come back. With this album, you're gonna get super close to an authentic Texas sound, something [DJ] Screw would've put out with a Fat Pat or one of those guys, but from a Smithville/Bastrop standpoint.

"There's different stories in the country," he adds. "We're trying to tell the country side."

"My music is my life," promises EC Mayne. "I never rapped about Lambos."

True enough, but on Candy Blue Like Screw, much of the artistic imagery revolves around a heavier auto body type: slabs. For the unfamiliar, here's a rundown of the anatomy: a big-bodied sedan – like a Crown Vic or a Cadillac – outfitted with chrome spoke rims jutting out prominently sideways called "swangers," a stylishly mounted ornamental spare tire known as a "fifth wheel," neon lights in the trunk, and loud, bass-heavy speakers.

"When you listen to Lil' Keke and all them back in the day, they rap about 'coming down the slab,' and the slab was the road, the slab of concrete," explains the pairing's primary lyricist, Mayne. "Later, it turned into a slab being a vehicle. It means you're riding slow, your music is loud, and it's banging.

The MC goes on breathlessly, breaking down the regional color associations of cars in vivid detail. It's a topic he speaks on passionately, the same way some obsessives talk about baseball or World War II. He understands the car's value as an art movement of Texas rap.

Being DJ Screw’s cousin is akin to saying you’re a descendant of Billy the Kid. It connects you to something, someone, mythic.

"It's a big part of the imagery of the Texas culture, period," he affirms.

Visions of autos connect the dots through various topics on Candy Blue Like Screw. Tricking out one's vehicle becomes the litmus test for a trusting relationship on "Worth It Forever My Chrome Lady." "Big Bass 2000" endorses making your presence known with the kickers in your trunk. "South Side" celebrates central Texas as "home of Relays, swangin' in three lanes." "Robert Earl With the Swirl" is a vibey history lesson on DJ Screw's car (and haircut).

Being Screw's cousin is akin to saying you're a descendant of Billy the Kid. It connects you to something, someone, mythic. In this case, it's a musician whose slo-mo style alchemized a regional subgenre that continues to influence modern music two decades after his death in 2000 from an overdose.

At 8, having moved from the roughly 4,500-population Smithville to the county seat, the rapper remembers hearing people playing Screw tapes, and telling them, "That's my cousin." They didn't believe him. "I'd cry and call the Screw Shop, 'Tell them I'm really y'all cousin,'" he recounts. "They'd be like, 'Yeah, you our cousin. Who need to know?'"

Being born into such a singular musical orbit remains significant to a blood relation. Soaking in DJ Screw tapes is how he learned to rap. Every Nov. 16, the day the producer died from a codeine-related heart attack in Houston, Mayne visits him at Smithville's Cunningham Cemetery.

"I grew up two houses away from the house he grew up in," he states. "Screw was a relative, a tangible person. I was around Shorty Mac and AI-D. I remember Screw having concerts at [Smithville's] Riverbend Park with Big Moe and Trae and all them."

That clique remains forever linked to Houston, aka Screwston, where its adopted namesake relocated as a high schooler and built his cassette empire. To his younger family member and fellow Smithvillians, their town is more than just the DJ's place of birth and burial. The community raised an acknowledged innovator and that's a history Deezie Brown and EC Mayne seek to both spotlight and grow off of with their partnership.

"In my heart, I feel like the people from Smithville and the other side of the family [relatives of DJ Screw's mother Ida Mae Davis] deserved a voice as well," says Brown. "We love Houston and we were raised on Lil' Keke, Fat Pat, Big Moe, and those guys, but at the same time, there's stories to be told from back home and a lot of people who've just wanted a voice."

Another facet about small towns: Friends become family. Bonds fuse. People stay in your life because there's nowhere to hide.

Deezie Brown and EC Mayne's grandmothers lived next door to one another. As grade-schoolers, Devin would spot Eric playing basketball in the driveway and come hoop. Afterward, they'd go inside where the latter would show off his Screw tape collection.

These became formative sounds for the boys. EC released his first raps at age 12. Deezie, meanwhile, impressed older cats with sample-based beats he'd made before he was old enough to drive.

"We were just kids, going off what we were seeing," Brown reflects. "When Screw passed away, all the guys back home were mad, so we started rapping aggressively. Now, putting this record out, we're grown up and have perspective."

For Mayne, as much as Candy Blue Like Screw raps a declaration of Bastrop County artistry, the LP plays back his and Brown's long friendship, thriving off contrasting voices sharing a sense of home.

"There's nothing wrong with being different," he states. "Back in the day, we didn't know that. Our neighborhood taught us that if you're different, you weren't down. Deezie's always been smart and I had to dumb myself down, because in the hood it isn't cool to be smart.

"We come from different backgrounds, but we have the same creativity," he adds. "And we've always pushed each other to do better."