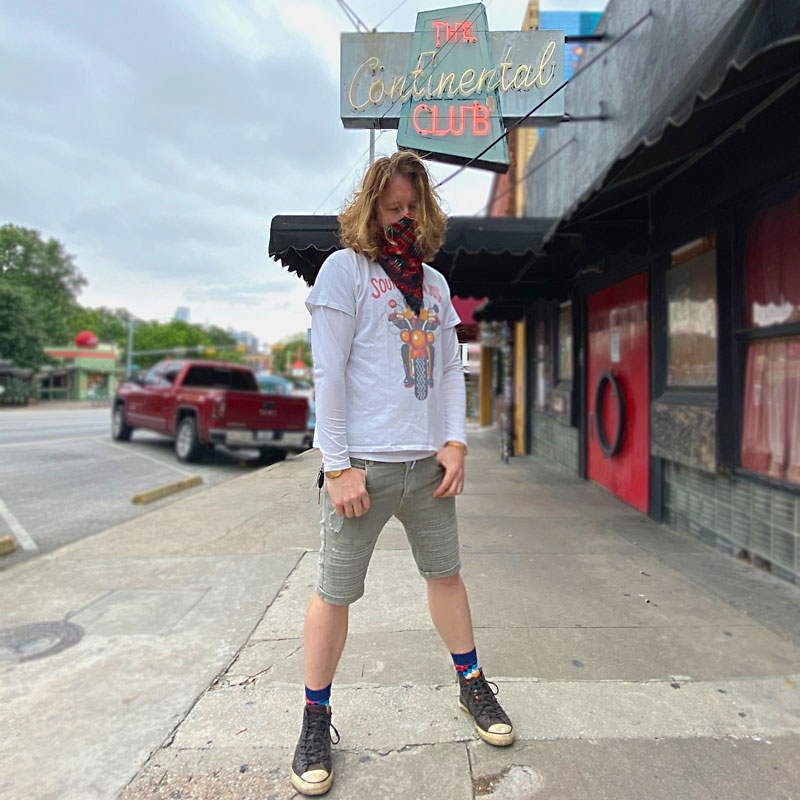 "There's always a silver lining to everything – or at least the way I live," offers Ben Kweller with characteristic charm. "I've always been really optimistic, always have to find the good in everything."

Holed up on his Dripping Springs ranch, the 39-year-old rocker leans on his well-cultivated fanbase, launching the "Bright and Early" fanclub and prepping the October release of new album Circuit Boredom, his first LP since 2012's Go Fly a Kite. Friday marks the hard-touring songwriter's first public livestream.

"Where I live, the internet is so horrible that I can barely do anything more than a Zoom or FaceTime, so I couldn't really participate in the whole livestreaming thing," he admits. "At the same time, I'm talking to friends in the music business, especially club owners, and they're just like, 'Man, we're dead.'

"So I was looking at solutions for streaming and seeing what other people are doing. I'm happy to stream and talk to fans, but it's not really adding to the whole ecosystem of musicians, clubs, crews, sound guys. So the conversations were how can we get back to some kind of normalcy and income that we can share?"

Kweller's solution shifts his label, The Noise Co., into production mode. Teaming with currently shuttered venues, the crew looks to re-create the live concert experience for fans with multiple cameras and an aftershow chat, while reconstructing ticketing, promotions, merch, and other industry functions for the online reality. Kweller plays guinea pig for the new series behind a solo set at the Continental Club, with Briston Maroney opening from Nashville.

"We realized that to do it the right way, we'd have to build our own way," he says. "We've got to pull together for all the crew guys and venues and staff. There's so many dominoes that people don't think about the music industry and what makes this machine run properly. We've got to do what we can." – Doug Freeman

ShaunSolo unloads napalm for nearly three minutes on new track "Be Aight." Dechaun Grice attempts to reassure himself and his people that "everything gon' be aight" in spite of a world bloodied by nonsensical atrocities. Kendrick Lamar and Pharrell Williams sang a similar tune in 2015, so the lack of progress toward racial equality since Grammy-winning rallying cry "Alright" justly infuriates humans globally. "Really ain't hearing our version/ In this life that we livin', trying to figure our purpose/ And they accidentally kill us on purpose," spews the young Austin MC before pointing out, "You can still die with your knees on the ground." The single art for "Be Aight" features slain victims of racial injustice such as Ahmaud Arbery, George Floyd, and Breonna Taylor.  – Derek Udensi

Bursting like fireworks, the powerhouse vibrato emanating from Gina Chavez carves through a flurry of Afro-Cuban rhythms on the title track to her new EP La Que Manda, which translates to "The Woman in Charge." While the Austinite's 12 Austin Music Awards attest to her musical mainstreaming, that voice – grounded, corporeal, yet soaring, otherworldly – chronicles the story of a woman reasserting her power. Aided by industry vets including Grammy-winning producer Thom Russo (Juanes, Enrique Iglesias), La Que Manda results in the singer's most pop-savvy "mezcla of organic and digital sounds." Jazzy ballad "Caigo" scintillates, but synths and vocoders in the bold triumvirate of "Ella," "Quita La Cadena," and "Bienamada" allude to reggaeton's dance floor pulse and flamenco's dramatic flair. Each track strikes adventurous forays within her South American and Mexican influences, a feat mastered through the ever electrifying confidence and accomplishment of Gina Chavez.  – Alejandra Ramirez

In the four fleeting months between his mid-2018 cancer diagnosis and subsequent death at 36, Austin's Seth Gibbs penned a truly heroic suite of songs. Should-be pop smash "Days Gone By," featuring his Bobby Jealousy co-lead Sabrina Ellis, diagnoses, "The future is one pill I won't take." In the George Harrison-like "The Way You Made Me" he promises, "I will fight to remember each line on your face/ I will fight as my mind is erased." Imagine such subject matter in the hands of a brilliant songwriter and producer such as Gibbs. His essential posthumous LP, We're All Connected, streams now on Bandcamp. Meanwhile, 20-track tribute He's Our Brother fundraises the vinyl issuance. – Kevin Curtin

Other than Linda Caldwell's self-reflexive harmonies on "Kiss of the Siren," The Shellers is a vocal-less affair, an instrumental outing polished and waxed for hygienic ears only. Music tech patent holder and longtime Austinite Jim Van Buskirk drums with guests to steer mood and speed-limit jazz chords toward universal sound. This analog restoration sequels Avant Garde's Hot August Rendezvous at the interval of almost 40 years between the two LPs. While cuts like "Leaving Paradise" and "The Tailwinds" matte paint skies, sunsets, and hint at a counterfeit coastline downward of Can's Flow Motion or Piper's Summer Breeze, there's less form to the fantasy, less pareidolia for the listener. Straining to find a face in the clouds, the retreat into pristine and precise nonconceptual instrumental music still provides respite enough to catch a breeze. – Rick Weaver

Time to cash the rain check for Eddie and Sandra Wilson's auction, originally slated for late June but thwarted by Texas' COVID-19 spike after the state's premature restart. The Threadgill's proprietors are selling off a clutch of artifacts and collectibles that quite simply can't be found anywhere else: vintage neons and ancient beer signs to make any entrepreneur or decorator drool, highly sought-after concert posters from the pens of the Armadillo art squad, historic framed photography, loads of Janis Joplin memorabilia, a Kenneth Threadgill gold record, and more. Online bidding has begun, while Saturday's motormouth sale will seek live bids and call-ins too. – Kevin Curtin

Slobberbone: Gimme Back My Band

Terry Humphries' Slobberbone documentary is made for a very particular kind of fan: Terry Humphries. The 15-year labor of love started with the Denton roots rockers' first breakup in 2005, and Humphries' current cut clocks in just under two hours. The editing is rough, but the bevy of full-song live performances compensates for a loose narrative arc. Humphries captures a particular point in underground alt.country that's cathartic, sweaty, and sloppy drunk, with the Brent Best-led quartet roaring Texas' best contribution to the raw energy of bands like Drive-By Truckers and Lucero. The film unspools a nostalgic love letter to an act that deserves revisiting. – Doug Freeman

What got left on the other side of the divide that is C-19? In a mail crate at the paper, orange vinyl of JM Stevens' Invisible Lines, solo debut from the Moonlight Towers frontman. Thick picking opens the record and so summons Springsteen but more a Midwestern earnestness: Ohio's Michael Stanley in the Eighties or perhaps the Twin Cities' Soul Asylum during the following decade. James' voice is sweeter, however – hard as that might be to recall through a hazy decade-and-a-half (and four full-lengths) of melodic bar sieges (and hangovers) from Moonlight Towers. Memphis horn accents on the succeeding "Maybe I Love You" mark the LP's second single drop last month. The plaintive "Nothing to See Here" rings Neil Young-ian, though again, intoned more honeycomb than Shakey's hornet delivery. In all instances, JMS remains unfailingly tuneful. "Old Camera" snaps the best moment here, maybe, the clearest, purest voicing of a nostalgia lined in acoustic guitar, piano, and Robert Earl Keen steelist Marty Muse. Closing lilt "Grows and Fades" ends with an orange-hued sunset. – Raoul Hernandez