Our favorite albums, videos, and performances 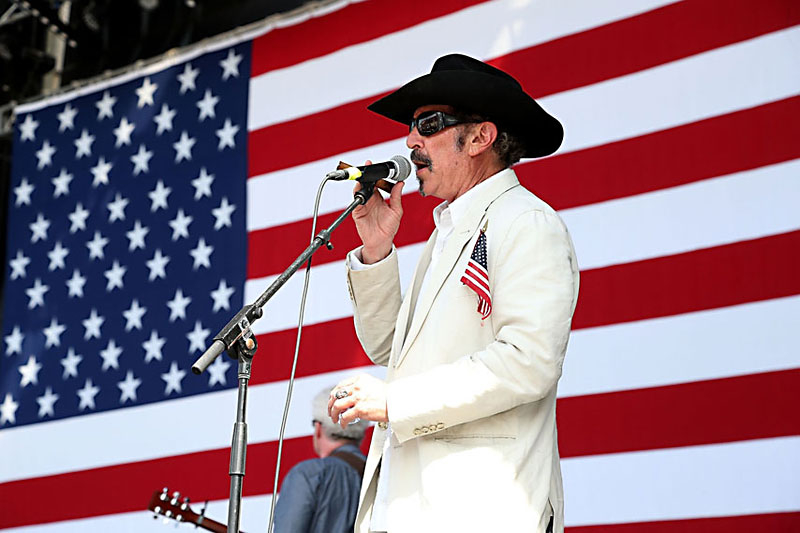 "I appear to be alive and well, quarantining more or less," offers Kinky Friedman from his sprawling Echo Hill Ranch just outside of Kerrville.

No fan of lockdown, the iconic and irascible Austin High graduate, 75, keeps busy by ruminating on life. He sets the phone down to play a new tune he's just written, "Buddy You're Living My Dream," a classic country turn given a modern flair. The song continues Friedman's streak of exceptional songwriting since returning to music with new material in 2015, most notably on last year's poignant Resurrection.

"You always feel you're writing for somebody," he says. "I personally always feel like I have a legion of detractors that never took me seriously, and I don't know why that is. Maybe it's because of the way the [Texas] Jewboys started out. We had some really great songs back then and we weren't dealing with light material, but people didn't take me seriously."

"There are some good stories," he recalls of that first appearance. "It was a wonderful time in a lot of ways that I don't think is coming around again." – Doug Freeman 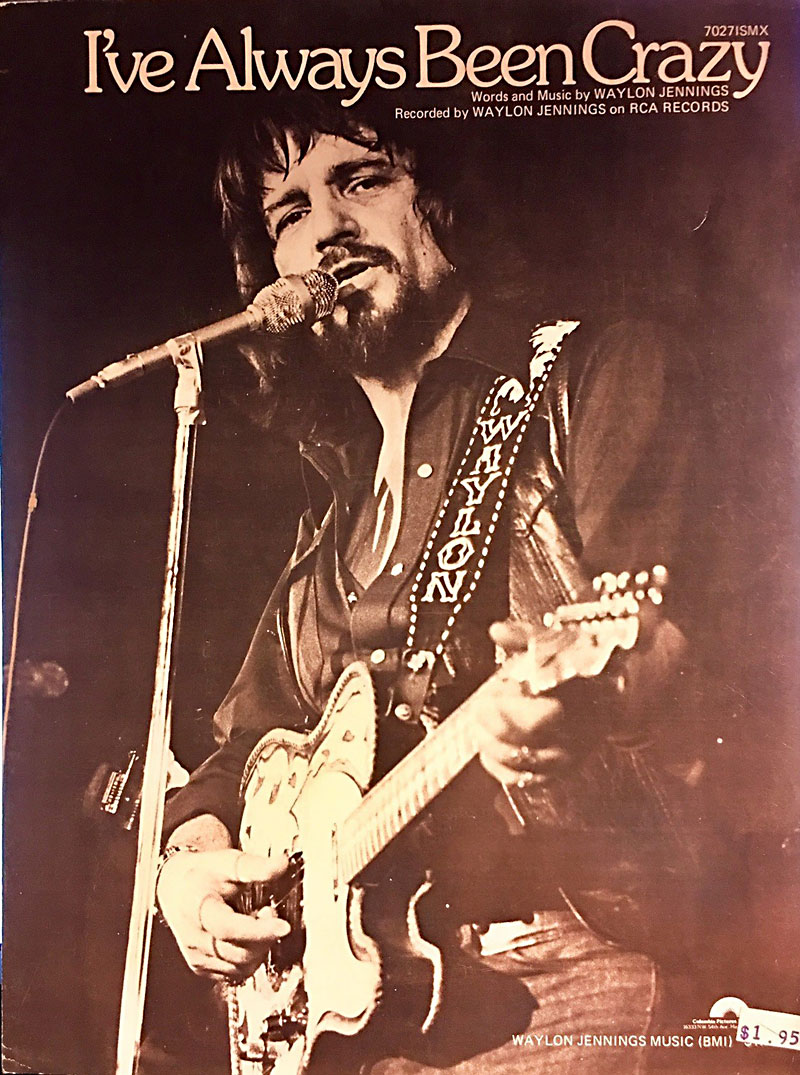 Sheet music for the title track to Waylon Jennings' album release of 1978, the year of The Outlaw Performance, which features songs from the LP.

"Don't ask me about the years I spent out in the rain/ About the ones I spent in love or the ones I spent insane/ Don't ask me who I gave my seat to on that plane." On that last line – remember Waylon Jennings famously ceded a spot on the flight that killed his pal Buddy Holly and Ritchie Valens – the camera's dead on the country music immortal's face as he looks into the sold-out Nashville auditorium. The flicker in his eyes is obvious enough, but the expression remains unreadable. Palpable emotion, casual music history, and larger-than-life songs relegate The Outlaw Performance to a 52-minute exercise in holding one's breath.

Scrubbed and sober for a presumed TV taping in 1978, the stentorian Texan plays it straight throughout, despite his titular repute still circling its peak. Hair styled under a trademark Lash Stetson, beard trimmed, starched white long sleeve shirt under his leather vest, clear-eyed and unsmiling, Jennings and seven or eight others open with Neil Young's Harvest yield "Are You Ready for the Country?" That'll curl your toes, but "Lonesome, On'ry & Mean" next makes the hair on your neck stand tall as the Littlefield native sings, "I'm going to Shreveport and down to New Orleans" with a throaty growl he modulates innately at the mic, rearing back for the more guttural phrases and leaning in for the low notes.

To witness that voice emanating from any man cannot be underestimated.

Waymore also takes plenty of leads and solos on his iconically embroidered Fender Telecaster. Finally cracking a smile on "You Asked Me To," he then breaks a sweat on "I've Always Been Crazy." Actually, the whole backend of this DVD elicits grins from the big man: "Don't You Think This Outlaw Bit's Done Got Out of Hand," "Mamas Don't Let Your Babies Grow Up to Be Cowboys." Meanwhile, "Luckenbach, Texas" drips with misty poignancy, silver-lined by pedal steelist Ralph Mooney and Billy Joe Shaver's "Honky Tonk Heroes" kicks and whips with head-back throatiness. That only leaves room for closer "Are You Sure Hank Done It This Way," on which Waylon saves his best solo for last – lonesome, on'ry, mean. – Raoul Hernandez

The Russell Westbrook of Austin hip-hop racks up another rapping-singing-producing triple double on latest single "Risky Business." Abhi Vaidehi's fearlessness with dabbling into new sounds results in this funk-inspired bop zealousness with saxophone. In the video, the self-proclaimed "rhythm romancer" joyfully dances while celebrating a fictional new year that's brought the overcoming of an Adderall addiction, screenwriting, and financial security. "Risky Business" follows lead single "Long Nights" in carrying on the video game theme prevalent in his current album Modern Trash. The clip closes with the star saying "defund the police." He held a Q&A session for his latest song on his Twitch page (twitch.tv/abhithenomad). – Derek Udensi

Njune's "One of These Days"

National strife prompts self-reflection in four standout talents of Austin's alternative hip-hop scene, offering equal parts poetic, tragic, funny, conversational, and solemn moments on "One of These Days." Rapper/producer Njune (Adrian Armstrong) layers in vinyl crackle and muffled, bass-heavy beats, easing in the intro by Ifé Neuro, last heard on May LP Cornel East. For his part, Ukeme continues the lo-fi serenity of solo songs like "Softie." Balancing the times, Chucky Blk urges introspection ("You gotta know yourself better before you project the bullshit"), while Njune validates dissent ("If you find my body dead in the streets, you better start a riot"). A James Brown interview circa 1983 winds down the panel of voices, fading to silence like a deep exhale. – Rachel Rascoe

Born and raised in Loreauville, La., producer/multi-instrumentalist JaRon Marshall makes hay as keyboardist for Grammy-nominated Black Pumas, but he's a proficient beatmaker who fuses funk, jazz, R&B, neo-soul, and hip-hop. The multihyphenate stays sonically diverse with The Gold Tapes Vol. 1-3, released by Paris-based Cascade Records and "born out of the respect of prior beatmakers, specifically Dilla, MF Doom, and Madlib." Adrian Quesada-assisted track "The Heist and the Getaway" captures Northwest African cosmo notes, and "Living in Vain" with rapper King Souul runs one of Marshall's best ideas in 52 seconds. – Kahron Spearman

Third Root: Passion of the Poets

Austin native CP Loony is all heart and guts on his latest EP, The Rebel Tape, an exceptional collection of inspirational bars. The baby-faced rapper wastes no time, no line, no space executing purpose throughout the entire 23 minutes. "Hunger Pains" lays out hood ills and consequences: "Niggas killing over jealousy, that shit lame (lame)/ Police killing niggas, now church choirs sing (sing)/ How many years are gone go through all this pain?" Besides Billboard-caliber songwriting talent, Loony sounds like an old soul, simultaneously all struggle and aspiration. "I could use those experiences to help others in similar situations," he says of the work. "Being a voice for the struggle is very important to me; showing the world that you can't put limits on what people can accomplish in life because of certain cultures, skin tones, and native backgrounds." – Kahron Spearman

"I was finishing this project the week COVID hit Austin in March," reveals Zach Youpa of his debut solo album. "Last winter, I'd spent a lot of time holed up with my collaborator/engineer, Jack Haley, recording all the parts to these songs, so I kind of felt prepared for the lockdown." The guitarist for Americana fusion outfit Light Horse Harry has produced an album of note in Guitar for Pandas, an effervescent listen stretching from rock and blues to reggae. "Where Are You Watching the Sunset?" jangles leisurely with a woozy lag. The tongue-in-cheek "Vodka Soda Double Lime" provides ample space for Youpa's guitar faculty. – Kahron Spearman

Maintaining a clockwork biennial release schedule for this July's fourth studio album, Austin psychedelicists Holy Wave saturate the 10 tracks of Interloper with the cozy summertime refraction of analog synth. Trending more paisley than rockist, the quintet boasts an ace rhythm section that underscores songwriting at times Floydian and Wilsonesque. Swaddled in reverb, the title track plays out like the former act's "Time" turned into a gentle lullaby, while command center electronics guide "Escapism" into the motorik beat of single "I'm Not Living in the Past Anymore," the titular refrain repeated over a lively, Krautrock-informed bounce. The latter half's "Hell Bastards" sends Holy Wave hurtling back toward the altar of Stereolab, with New Wave-y "Buddhist Pete" and ruminating "Redhead" nourishing high spirits until the very end. – Greg Stitt