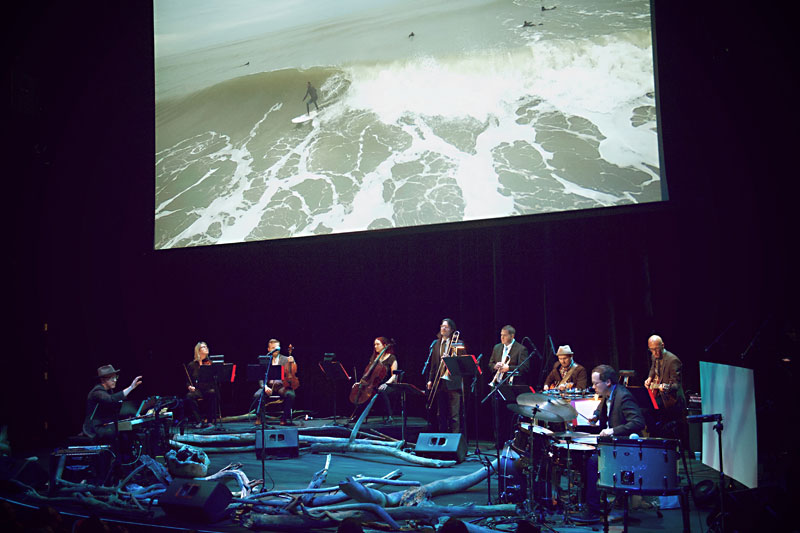 "You just try to adapt," sighs composer/pianist Justin Sherburn, artistic director behind local orchestral rock ensemble Montopolis. "I had all these shows throughout Texas cancel, so it then became:

"'How can I do something? How can I provide some service for the community?'"

The pianist and his troupe of strings, horns, guitar, bass, and drums ventures into the realm of drive-in performance with two presentations of the environmentally focused multimedia effort The Living Coast over the next seven nights. Sonically, Sherburn's excited about the natural chorus effect that'll come from having his epic compositions emanating from FM car stereos. Socially, he also anticipates unique experiences for attendees too.

"People can make out in their cars," he chuckles. "That's what people do at drive-ins, right?"

The Living Coast renders a full spectral representation of the Texas gulf, its majesty and malady, its past and present context. The show fuses arresting imagery by cinematographer Anlo Sepulveda with spoken word performance from environmental scientists and the agile music of Montopolis.

"We get people emotionally engaged in the environment and have scientists come in and say, 'Here are the facts about the coming world that you are going to live in,'" explains Sherburn. "There's tremendous conservation along the coast for the science community to deliver information about for the next 20 or 30 years."

Meanwhile, the bandleader contemplates taking Montopolis' rescoring of 1916 silent western The Return of Draw Egan on a national tour of drive-ins.

"What I love about the drive-in theatres is that they're absolutely American entrepreneurial mom-and-pop shops," he says. "There's no AMC drive-ins. They're all weird and curmudgeonly, and have their own culture." – Kevin Curtin

Already a Grammy-nominated producer for his recent work with Ariana Grande, Austin rapper/producer Brian Malik Baptiste is taking his turn in the bright lights with a blistering official, label-backed debut single, the self-produced "Red." The cut comes from an upcoming project on the ARTium/AWAL label of famed producer No I.D. (Common, Jay-Z). "Being hurt, disrespected, unaccounted for, or bluntly hated sparks anger, and 'Red' is the processing of those emotions," he says of the simmering midtempo track. "Anger is a valid and appropriate response." – Kahron Spearman

Devised as a companion piece to November's The Spiral Arm, Dallas Acid's fourth album of soaring synth-and-gong hypnosis, The Spiral Ambience finds the local trio stripping out and slowing down select works in an altered state rumination they compare to previous sessions creating music for float tanks. Leading with a three-part sequence of the title track, the five pieces run nearly an hour, with "The Enamel Sea" offering a phantasmal remix of "Emaljets Hav," which loses no intensity through its minimalism. An edition of 80 cloth-bound CDs are for sale from UK imprint All Saints Records in addition to an immediate download upon its June 12 release.  – Greg Stitt

Dayglow's "How I Made" Series

"It all began with a sample," grins Sloan Struble, aka viral ATX pop phenom Dayglow, queueing up audiovisual snippets of his mother playing pied piper during the Texan's childhood outside of Ft. Worth. In the "How I Made" clip for "Hot Rod," our one-man effervescence machine and host turns toward the camera, "I always wanted to use that, so I kinda just threw it in the song and it makes it really special." Exactly like the local's acclaimed 2019 debut Fuzzy Brain, now unpacked also by 8- to 15-minute videos for "Fair Game," "False Direction," "Can I Call You Tonight," and "Run the World." Long stretches of computer tracking screens would otherwise bore if not for the revelation of what any one track – anywhere – contains. Struble comes full circle in having his mom shoot the alien cheese visuals for the latter tune.  – Raoul Hernandez

Produced during sessions for sprightly indie folk LP Do No Harm, two new songs arise and rather than outtakes, they're a perfectly balanced set. The dynamic pair reach for both ends of the band's psychedelic swoon with continued support from homegrown outlet Keeled Scales. Balladic "Acid Wash" rides waves of lovesick yearning over wistful violin and layered vox. Find a live video on the group's Bandcamp, tracking Grace Rowland's effortless refrain of "always on my mind." Beyond the clouds, uplifting "Superstition Mountains" opts for mandolin and bright swells.  – Rachel Rascoe

Mike & the Moonpies, Touch of You: The Lost Songs of Gary Stewart

Much like recently decamped SpaceX astronauts, woozy ATX shoegaze trio Ringo Deathstarr launches the new Levitation Sessions series into orbit with a prerecorded 70-minute set. Edited and mixed by the band, with accompanying visuals helmed by Astral Visions light show artist Sydney Quezada, Shelter in Space provides the closest thing to a live performance of the eponymous May platter that we'll have anytime soon. Access to the stream and concurrent Q&A runs a meager $3.98, with $1 from each ticket going to NIVA. Additional add-ons and upgrades include a digital download and limited-edition cassette with two songs not included in the stream, as well as newly minted merch created by Levitation art alum CMRTYZ.  – Greg Stitt

Austin's prime comedic belligerence-core outfit got the shitty end of the COVID-19 stick. Now impossible to play seven nights per week, soiling their wrestling masks and feathered boas during a constant stream of whiskey shots from fans, they also dropped a new LP just as global lockdown occurred. That blows, because between opening/closing statement-of-purpose "We're Belligerent" – essayed both as banjo-laden bluegrass and high-speed aggro-punk – Blacking Out may be the best distillation of Worm Suicide's yuks-galore hatecore. Given lyrics like "Fuck all your charity/ And fuck all your crying eyes/ They won't change me," you gotta wonder whose backside they applied their stimulus checks to.  – Tim Stegall