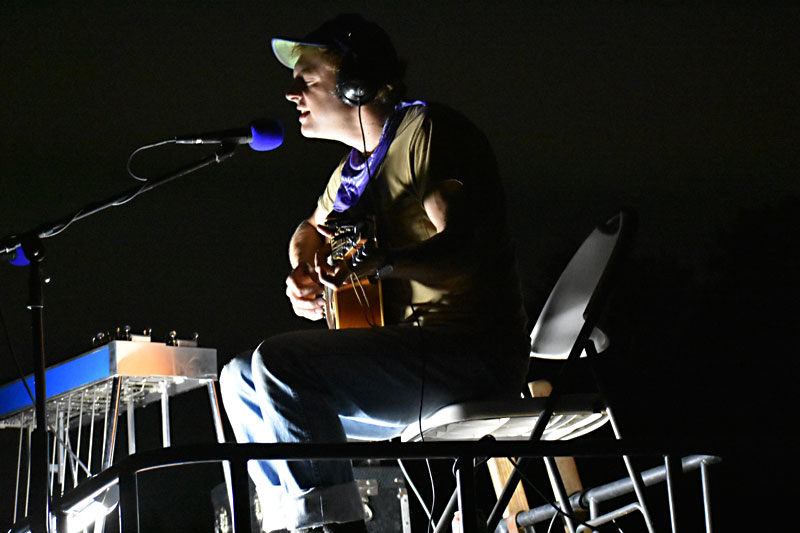 At last Thursday's sold-out debut, a pirate radio signal provided the event's only audio. Thus, with a car stereo, one could adjust the volume of David Ramirez's heart-piercing voice and Simon Page's plaintive pedal steel. Between sets, Orson Welles' chilling 1938 reading of War of the Worlds played on the appointed dial number.

The night thus played witness to a DIY version of what will no doubt become a wave of contactless drive-in concerts.

While large-scale iterations and $8 beers and sponsor logos are surely forthcoming, Ballinger's Drive-In Concerts ATX exist refreshingly scrappy: artists play atop his 1991 electric blue Suburban in an undeveloped South Austin field, with the electronics powered off a couple car batteries. Chronicle roots music expert Doug Freeman wrote of the experience, "It felt for a moment like Austin again: weird, makeshift, and communal."

Ballinger plans to host regular drive-ins, selling admissions at a flat rate per vehicle. Upcoming shows will drop at @DriveInConcertsATX on Instagram. The next concert, scheduling after current May showers subside, will feature a local Americana act that's no stranger to playing in fields, although those are usually at national music festivals rather than jury-rigged drive-ins.

As we adapt to find a live music fix that meets our personal standards of safety – Ballinger provides separate mics for performers and asks guests to follow city of Austin guidelines on masks and distancing – the drive-in scratches that itch. For proof, these proved the most uttered words at the pilot event: "I needed this." – Kevin Curtin

Netherfriends (Shawn Rosenblatt) encores last year's powerful 50 songs for 50 states project with monthly releases. COVID-19 foiled his mission to visit every geographical inspiration this year, but the quarantined one-man band tries his hand at high fashion with longtime collaborator the Teeta (Trenton Anthony). Netherfriends sticks to production on the nine-song, 16-minute tape, The Quarantine, and his beats bring an elegance to Teeta's "pretty boy trap" style missing from the prominent Austin rapper's Teeta World. A sharper sound on denser production, the tape proves topical and exotic thanks to lines like, "I got some Bathing Apes on my face mask." – Derek Udensi

Summarizing four decades of experimental Austin synthesist Rick Reed's career into an easily digestible audio tome is no easy task, resulting in only a cursory glimpse of constantly shifting techniques and technologies across a fraction of his discography. So Reed himself presents 20 Million Years to Earth, a hefty, 20-track comp balancing avant-garde, mystifying field recordings, and spaced-out improvisations from 1980 to today. At 150 minutes, a listen can seem daunting, but it's a worthwhile chance to throw on headphones and explore years of solo work and collaborations with fellow noiseniks Keith Rowe, Josh Ronsen, and nearly a dozen others. – Greg Stitt

After finding her voice as an enthralling folk presence in the Austin scene, Jess Williamson's third album Cosmic Wink chronicled a transformative move out of her home state. Penned in L.A., her newest LP on Mexican Summer, Sorceress, is thoroughly Texan, threading Nineties country and dusty psych with Williamson's commanding, crystalline tone. "Wind on Tin" whistles modern Marfa, hinging on the line, "Nothin'll get you like seeing a cowboy cry." Synth and pedal steel push a wider cinematic vision than past work, the songwriter acting as intermediary between modern malaise and magic in grand pop ballads. Recording wrapped at Dripping Springs studio Dandy Sounds. – Rachel Rascoe

BettySoo became a reluctant stream queen thanks to quarantine – much to the delight of fans. Her trio alongside Rebecca Loebe and Grace Pettis, Nobody's Girl, moves forward with the July release of a debut LP, but with tours grounded, Soo plots a path through her own home with her new weekly Rock the House Friday stream. Likewise, when shutdowns put her weekly residency on hold, the songwriter moved Nobody's Happy Hour online with special guests every Tuesday. The sessions prove delightfully informal and joyful despite the name, as Soo and her guests reconnect and commiserate together. – Doug Freeman

The pandemic forced even the grungiest of venues to diversify in order to stay alive during the shutdown. The Lost Well, a clubhouse for heavy underground music and motorcycle riders, not only has effectively become an apparel company – dishing fresh T-shirt and bandanna designs – but also home to consistent livestreaming fundraisers with its Rock for Rent studio series. They'll double sanitize the microphones after cowpunk veterados the Hickoids come out of their "corn-teen" to perform a mother lode of ne'er-do-well anthems they've amassed in 36 years of sleazin' and pleasing. – Kevin Curtin

James Steinle's Man From the Mountain

The early 2020 release of excellent sophomore album What I Came Here For serves as a springboard for young songwriter James Steinle, who keeps momentum with the digital release of a concept album conceived over the past year. The Man From the Mountain offers a short song cycle of a plagued small town, a mountain stranger in love with a Valley girl, and a tragic tale that plays out like a Cormac McCarthy short story. Juliet McConkey sweetly voices the centerpiece gems as the Valley girl, salve to Steinle's direly graveled narration. – Doug Freeman

Abiding by a "tune lower, play slower" mentality, high and mighty local doom trio Thunderkief oozes through its self-issued debut album like wax. Five dense tracks on Anatomy of Thunderkief top out near an hour and leave nothing but resinated low end and slow, grimacing head nods in its wake. A dab hand with rhythm, drummer Andy Traugott fills in the backline for the double, down-tuned axe assault of Johnny Glover and Dusty Brooks, the latter providing sparse vox with a glowering snarl. The locals built up to this release over a decade of scattered releases and blunted performances, the most recent of which took place at Jester King's Doom Forge Day in February. $4.20 to party, y'all. – Greg Stitt

Austinites of a certain age and local history will remember Little Richard, who died May 9 at the age of 87, for giving a South by Southwest keynote interview in 2004 – about which Managing Director Roland Swenson famously cited the incendiary, early rock & roll architect's advice to "always sign your own checks" – and an accompanying show that same night at the now bygone Austin Music Hall. Indeed, Mr. Penniman lit up both appearances – ribald, crazy, electric. Now who recalls his appearance at UT's Forty Acres Fest three years later, in front of the Tower, no less? YouTube, for one, complete with the howler's high falsetto and whoops still intact in front of a swinging brass fantasy. Who's got video of the entire set? – Raoul Hernandez