Excerpts From Texas Is the Reason, a Look Into Austin Music's DIY Age

Scenes from inside the weird gold mine 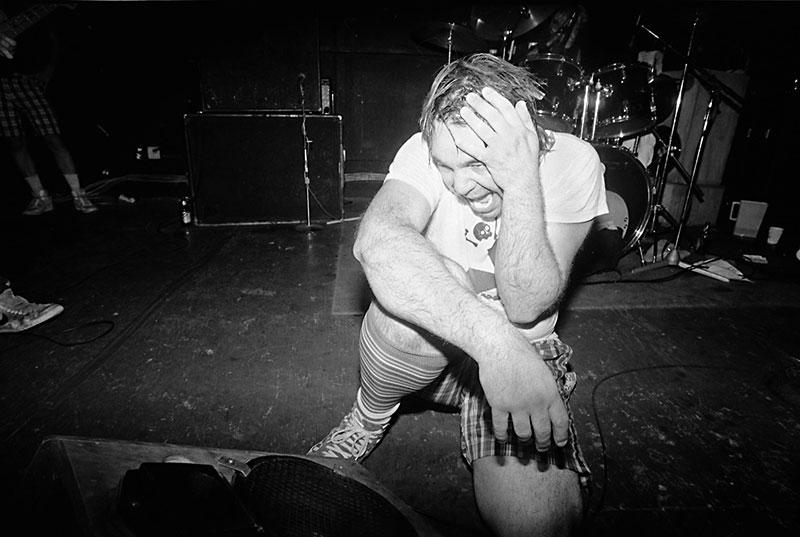 “When the world is blown away, and mutants are the thing,” he sang, “… Mutant rock will be the rage, and it will sweep the land.”

In the fall of 1979, Steve and I started classes at the University of Texas, but we were still working at the Village Cinema 4. One night, we were loitering outside of theater 3 when Steve mentioned a bar on the Drag. Then he said, “My band is playing this Tuesday night.”

“Yeah, you should come see us.”

Raul’s had once been a Mexican American music club, but now they booked different sorts of bands. The carpets were permanently sticky and one wall was covered with a giant mural of two rats perched at the edge of a sewer pipe. When I got there, the guy at the door looked like a biker, but he didn’t ask for ID – which was all I cared about since I was still 17.

The Big Boys were already playing, although they kept introducing themselves as Kaye Mart & the Shoppers. The singer, the bass player, and the guitarist actually were big boys. Wearing dresses. So was Steve, plus mascara.

The Big Boys made a jagged, primitive sound that had something funky underneath. The singer, who called himself Biscuit, introduced one song as “Mutant Rock.” “When the world is blown away, and mutants are the thing,” he sang, “… Mutant rock will be the rage, and it will sweep the land.”

Raul’s wasn’t crowded. Some of the girls were wearing sleeveless British flag T-shirts or spiky hair, and some of the guys were sporting sunglasses, but the scene was mostly dark and shabby. This didn’t look like the punk rock I had seen on TV, but everyone did seem really creative. I started taking pictures.

I had entered a complete, self-sustaining world. Every band was doing their own songs. The audience was full of characters – like Sarita and Clair LaVaye, who were said to be witches and supposedly slept in coffins. Over the next few months, I became a regular. I would stand up front, close to the band. When they finished playing, if I liked them, I’d lean in and say, “You guys were good!” And they would say, “Thanks.”

As a teenager, I had seen lots of touring bands in huge concert halls. At Raul’s, I discovered that transcendent music is sometimes made by actual humans. Humans you can speak to. After you understand that, you don’t need rock stars anymore. 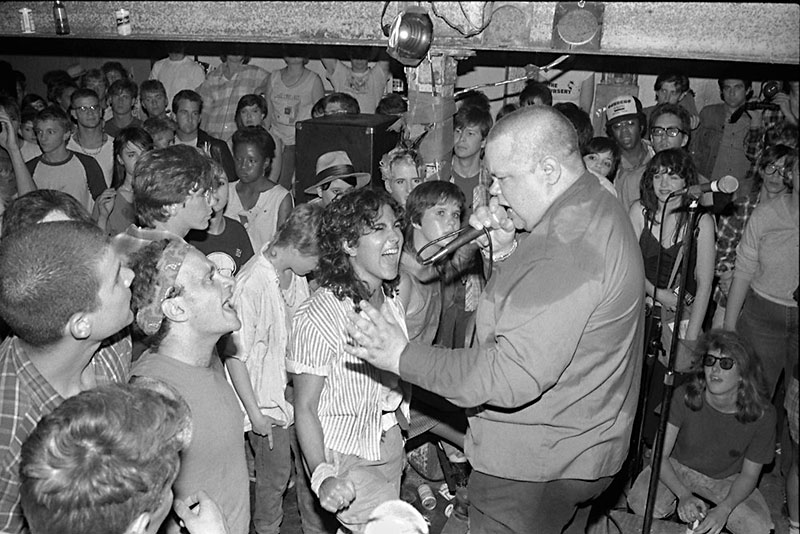 Gary Floyd leading the (new) Dicks and playing to number one fan Christi Delgado at Voltaire’s Basement, April 1984 (photo by Pat Blashill)
Diane loved this singer in a Mao tunic, and she loved the Dicks. She loved the audience. She thought, “These are my people …”

Diane was only 15 when she asked her father to drive her down the Drag as slowly as possible. She was glued to the window, staring at a couple of kids with Mohawks. She seemed to be taking notes, doing research.

She had never liked sunny pop music. She didn’t feel sunny. She loved David Bowie and Brian Eno, probably because the world they sang about was weird and fragile and beautiful. She loved Roxy Music. Roxy Music was like nothing she’d ever heard on the radio. They were very European, super sexy, and possibly insane.

They were everything that South Austin was not.

She thought punk was disgusting at first. Then she decided it was the best thing in the world. Punk told her darker stories. Her best friend Kathy bought her records at garage sales. When she went over to Kathy’s house, Kathy’s mom would answer the door, take one look at Diane, and say, “Oh, you girls. It’s Halloween every day with you two.”

Kathy started calling herself Ralph. She told Diane about the punk rock shows happening on the UT campus. One night, just after she turned 16, Diane climbed out of her bedroom window and went to her first punk show, at an off-campus dorm called New Guild. When she got there, Diane wandered around the scuffed up old mansion. Someone gave her vodka.

By the time the Dicks started playing, Diane was potted. They started with a broken glass riff that seemed slightly out of the band’s control. “Daddy, daddy, daddy/ Proud of his son!” howled singer Gary Floyd. “He’s got him a good job/ Kills n-----s and Mexicans!” This was “Hate the Police,” the band’s 1:59 magnum opus.

Diane loved this singer in a Mao tunic, and she loved the Dicks. She loved the audience. She thought, “These are people I want to get to know and spend time with. These are my people.”

A few weeks later, Diane saw a poster on a light pole on the Drag. The art was a cartoon of a frat boy and sorority girl, decorated with arrows and helpful captions like, “Too much makeup,” “Mexican peasant dress,” and “Straw bag full of credit cards.” At the top blared the words: How to Recognize the Enemy.

Diane went home and gathered all her preppy clothes. She tore them apart, then put them back together again. She found a Neiman Marcus purse she could swing. She had completed her research. She would be the purest white girl in Hell. She would call herself “Muffy.”

I met Muffy later, when my friend David Yow was sleeping on her couch. I dropped by her place one night. According to Muffy, I was instantly besotted with her pal, the infamous Becky Balboa. Muffy was in a feisty mood. She was pretty sure she was about to be fired from her job as a cook at a popular bakery. So she improvised a raiding party. I was roped into the scheme as a getaway driver.

Muffy, Yow, and the MacDonald brothers piled into my mom’s Cutlass Supreme, and I carted us all to the bakery. They told me they were picking up some “work clothes,” and that they would only need a second. They returned with several bottles of champagne and enough food for a week. I asked no questions and deposited them neatly back at Muffy’s place. I am told I was very jolly, which is strange, because I know I would have been unhappy breaking the law. 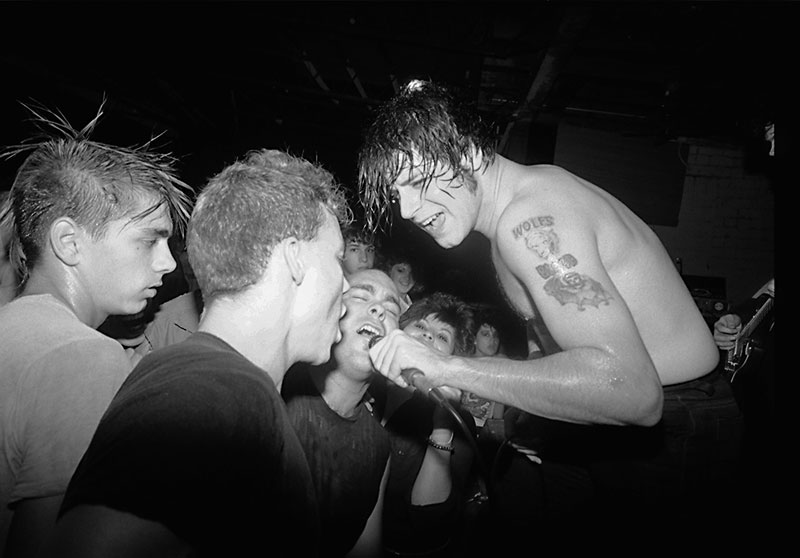 Glenn Danzig in Samhain guise at Liberty Lunch, September 1984 – same show as the Big Boys. (photo by Pat Blashill)
Danzig walked over to the mirror, grabbed a huge forelock of his blue-black hair, and pulled it down in front of his face. Then he began to empty one of the cans of Aqua Net into his hair until the forelock was a hardened, lethal point.

In the beginning – back in 1979 A.D. – two laws were immutable: Everything old was bad, and rock stars were worse. The Huns, possibly the most infamous Raul’s band, sang a song called “Glad He’s Dead.” It was about JFK.

The laws started changing a few years later, after Steve quit the Big Boys. It was no longer fatal to admit that you liked country and western music, Frank Sinatra, or Black Sabbath. David Yow’s band Scratch Acid even played a song from Jesus Christ Superstar.

In any case, everybody was psyched to see the Misfits play at the Ritz in 1982 – and not just because they played guitars made out of bones. Steve loved the Misfits, especially their song about 1960s horror movie host and Ed Wood starlet Vampira.

At the Ritz the night of the show, Steve climbed up to the balcony. He didn’t know that the balcony was also the backstage area. He saw the boys in Crotch Rot smoking pot with a couple of Misfits. He saw about eight cans of Aqua Net hairspray lined up in front of a mirror. Then Glenn Danzig walked in. He was such a short fellow!

Danzig walked over to the mirror, grabbed a huge forelock of his blue-black hair, and pulled it down in front of his face. Then he began to empty one of the cans of Aqua Net into his hair until the forelock was a hardened, lethal point. Steve was transfixed.

Three hours later, the show had already entered Austin legend as the loudest punk rock show ever. The Misfits were cranked up so high that they shook big chunks of plaster off the ceiling of the theatre. Muffy, who was a die-hard fan, escaped, and she spent most of the show out on Sixth Street, like everyone else.

I wasn’t there, and by the next morning, I knew I had fucked up. That week, I scrambled around asking everyone, “How were the Misfits?!” They all said the same thing: “They were horrible! They were just like Kiss!!” Finally I got to Steve.

“How were the Misfits?!”

Pat Blashill is a photographer, writer, and former Chronicle contributor. Born and raised in Austin, he now lives in Vienna, Austria. Available through publisher Bazillion Points (www.bazillionpoints.com/books/texas) as well as local record stores Waterloo, End of an Ear, and Antone’s, plus BookPeople, Texas Is the Reason boasts auxiliary and like materials at www.patblashill.com.