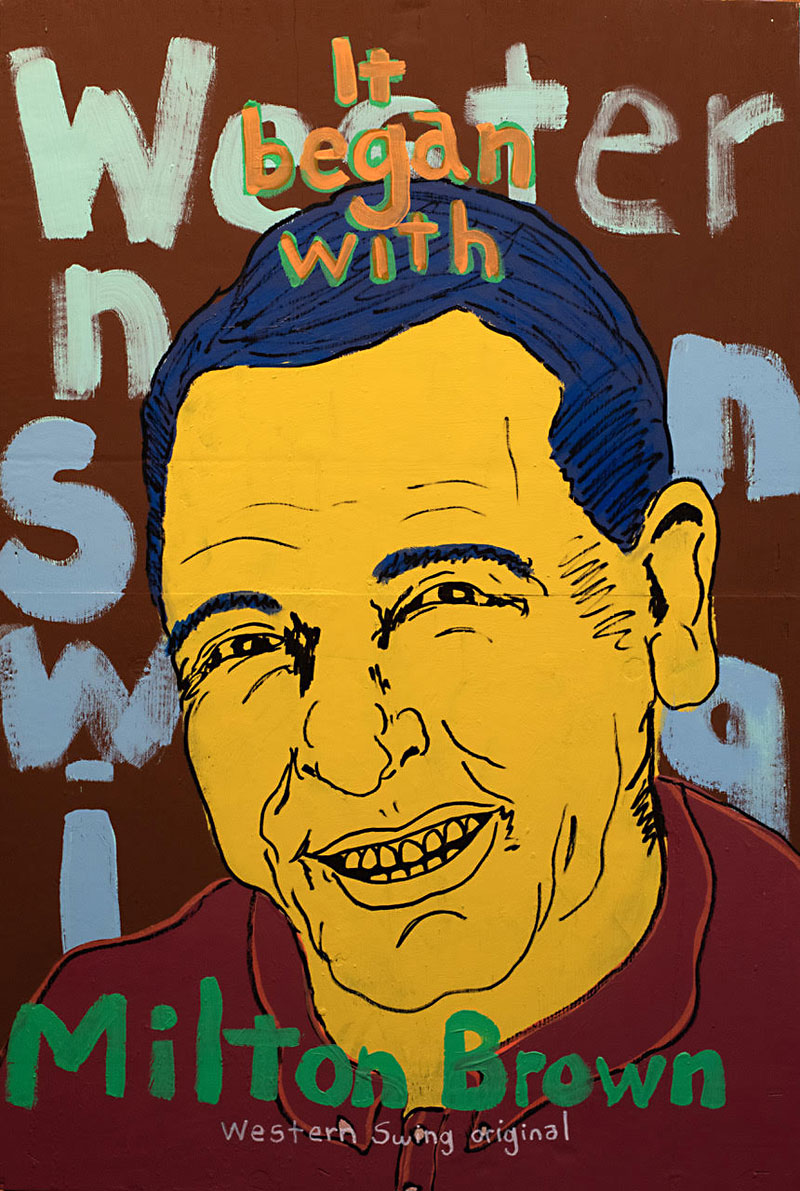 “It’s the same ol’ tune, fiddle and guitar, where do we take it from here?” sang an ol’ honky-tonk hero in the Seventies, but back in the early Thirties, Milton Brown and Bob Wills were thinking the same thing. The singer and the fiddler worked together less than two years in the Light Crust Doughboys, but what they started afterwards, when they kept adding instruments and improvisation, came to be called Western swing.

Although Wills earned the “King of Western Swing” tag with four decades of dance hall-filling dominance to make cowboy jazz a Texas tradition, the innovator was Brown, whose Musical Brownies were the prototype Western swing band in 1932. Four years later he’d be dead and his former partner would carry the torch with an “Ah-ha!” holler.

Brown’s smooth vocals brought the city to the country and, with the addition of pianist Fred “Papa” Calhoun, the Brownies converted the string band into a dance outfit, mixing the previously disparate styles of jazz, country, blues, and pop to fill the floors. The 2/4 “Milton Brown Beat” revolved around the mighty strike hand of tenor banjoist Ocie Stoddard, who was followed closely by standup bassist Wanna Coffman and Milton’s little brother Derwood Brown on heavy rhythm guitar. Fiddler Jesse Ashlock handled the melody, while Calhoun brought such an air of improvisation that he was nicknamed “Papa” by Brown in reference to legendary jazz pianist Earl “Fatha” Hines.

Brown’s smooth vocals brought the city to the country.

The Musical Brownies would first record in April 1934, a year and a half before Wills & the Texas Playboys. And yet Wills was called “the first great amalgamator of American music” when he and the Playboys were inducted into the Rock & Roll Hall of Fame in 1999. Milton Brown is not even in the Country Music Hall of Fame!

Milton led the band for only four years, during the Depression, but he knew how to get the people to come out. The Musical Brownies were easily the most popular dance band in Texas in the early Thirties. But they almost never played out of state, except to record in Chicago and New Orleans.

In Cary Ginelli’s oral history Milton Brown and the Founding of Western Swing (University of Illinois Press 1994), Calhoun recalls being dragged out to Crystal Springs Dance Pavilion, four miles northwest of Fort Worth, on a snowy Thursday night in late ’32 and being impressed by the turnout of hundreds for Milton and the boys. Billed as “the Colonel from Kentucky” (though he was from Chico, TX), Calhoun played solo jazz piano on KTAT, so he was known to the Brownies, but nobody played keyboards with a string band back then. Milton removed the cover of the house piano and called Calhoun up to sit in on “Nobody’s Sweetheart,” and the pianist jammed for the entire set. During intermission he was asked to join the Brownies.

They had found something special, but Brown was not done assembling his dream lineup. He hired classically trained Cecil Brower to play twin fiddle – a new concept – with Ashlock at first, then Cliff Bruner. In late ’34 came steel guitar genius Bob Dunn, who started off as a Hawaiian-style player, then found greater satisfaction emulating the sliding trombone of Vernon’s Jack Teagarden. But how could Dunn’s guitar, a Martin acoustic laid flat and played with a steel bar, be heard over this hot band? With “Taking Off,” recorded in Chicago in January 1935, Dunn had the distinction of being the first to record an electric guitar, played through a magnetic mic in the soundhole.

The Musical Brownies were easily the most popular dance band in Texas in the early Thirties.

Brown developed the idea to play a jazz/pop repertoire with country music instrumentation, but Wills went bigger, adding drummer Smokey Dacus in 1935, then a horn section soon after. Wills and his 13-piece orchestra, with Brown’s replacement Tommy Duncan on vocals, did not see themselves as competing with the Musical Brownies as much as with national swing orchestras on tour. Filling every square of air in the enormous dance halls and ballrooms of Texas and Oklahoma, the Texas Playboys eventually outdrew Tommy Dorsey and Harry James. Like Milton, Bob could always get the top players, including slidemaster Leon McCauliffe, whose 1936 recording of “Steel Guitar Rag” was every bit as influential as Dunn’s ground-breaking work.

Wills is still the king because in April 1936, Milton Brown crashed his new Pontiac Silver Streak into a telephone pole on the Jacksboro Highway and was dead at 33. Band members surmised, because they’d seen him do it before, that Brown fell asleep at the wheel (which would make a good name for a modern Western swing outfit.) His passenger, 16-year-old aspiring singer Katy Prehoditch, was killed instantly in the 3am crash. The recently divorced Brown died six days later of pneumonia while still in the hospital. His ex-wife Mary Helen married Bob Wills in 1938.

Milton and the Musical Brownies left a rich recorded legacy: 16 sides for Bluebird in 1934, and over 100 for Decca, recorded in the 15 months before Brown’s death. But live is where they really took off, with the dancers spurring them on. It’s lucky for fans of Texas string band dance music that Wills and the Playboys were there to “take it away.” There was an abundance of overshadowing, but if the Texas Playboys weren’t so thrilling for so long, Brown’s vision wouldn’t have gone as far.

Everybody wanted that swing, pioneered by the Fletcher Henderson Orchestra of the Twenties, with Louis Armstrong’s trumpet peppering the beat. In the Thirties, Georgia-born Henderson sold arrangements to Benny Goodman, who took swing to new heights of popularity. Jazz-minded rural musicians wanted to play “that hokum,” too, and the Musical Brownies showed that Texas audiences also wanted to dance to it, just like the Yankee swells did at Roseland Ballroom.

The old Texas dance halls, built by Czech and German immigrants in the years between the Civil War and World War I, were ready-made for this new exciting string band swing. The venues were so cavernous that bands had to use more instrumentation, because if there’s a word to describe what makes Texas music special, it’s “dancing.” The beat had to break through the chatter to give a template of movement to those out on the floor. It was a formula later followed by Cliff Bruner’s Texas Wanderers (featuring Moon Mullican on piano and Leo Raley on electric mandolin) and the Leon “Pappy” Selph’s Blue Ridge Playboys (Floyd Tillman, Ted Daffan), both from Houston, and San Antonio’s Adolph Hofner & the Pearl Wranglers. “Although I never had the pleasure of knowing Milton Brown, he and his band were my big inspiration,” Hofner told an interviewer. “They played jazz then, the same as New Orleans jazz, but without the horns. They did it with strings.” Even with his unfortunate first name, Hofner had the distinction of being the longest-tenured Western swing bandleader, mixing cowboy jazz with polka music from the late Thirties until the early Nineties.

Brown and Wills met at a house party in Fort Worth in 1930 and joined forces, each bringing their own guitar player (Herman Arnspiger and Derwood Brown) to play Eagles Hall in Fort Worth as the Wills Fiddle Band. The quartet added Sleepy Johnson on banjo, and became the Aladdin Laddies when the Aladdin Lamp Company sponsored their WBAP radio show in the summer of 1930. After that deal expired, they shilled for Burrus’ Light Crust Dough, first on KFJZ, then the more powerful WBAP. In the early years of radio, record labels thought airplay would actually hurt sales and forbade most of their ’78s to be played, so almost all of the music on radio was from live performances.

Brown and Wills recorded only one ’78 together, as the Fort Worth Doughboys, for Victor in Dallas on Feb. 9, 1932. But Brown original “Sunbonnet Sue” and a cover of “Nancy Jane” by the Famous Hokum Boys (featuring Big Bill Broonzy and Georgia Tom Dorsey) didn’t further their career. Seven months later, Milton was no longer working with Bob, who left the Doughboys 11 months after that. Wills initially moved to Waco, where he called his band the Playboys, but the jilted Burrus Mills general manager W. Lee “Pappy” O’Daniel, who would go on to become Texas governor in 1939 and U.S. Senator in 1941 (defeating Lyndon Baines Johnson), did everything in his power to drive Wills out of the state. O’Daniel sued Wills in Oct. 1933 for billing his band “formerly of the Light Crust Doughboys” and lost, but kept appealing the decision. While based first in Oklahoma City and then Tulsa, the Playboys added “Texas” to their name and became the swingingest country band in the land over the next 30 plus years.

Sometimes what you go out and accomplish on your own surpasses the benefits of collaboration. Even if everyone has forgotten. Milton Brown was the Edison of Western swing and yet, perhaps because he was a singer, not an instrumentalist, he’s not suitably honored today for his mammoth musical innovations. He fell asleep at the wheel and has been unjustifiably slept on ever since, rating just a passing mention in the Ken Burns Country doc on PBS. But Bob Wills went to his grave in 1975 knowing that, at least in the beginning, his Texas Playboys followed what the Musical Brownies were laying down.

Order Ghost Notes: Pioneering Spirits of Texas Music directly from the distributor by calling 1-800-826-8911 or from Amazon. 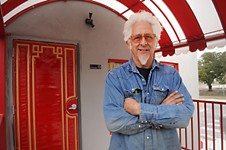