What we’re watching and listening to 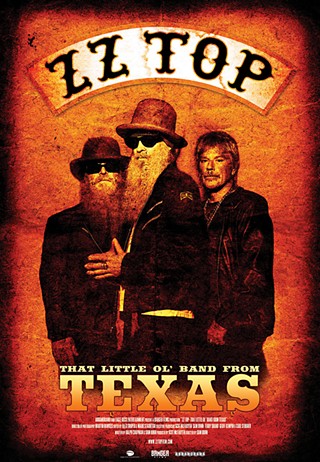 Netflix
Imagine seeing the most enduring of all power trios at Gruene Hall. ZZ Top: That Little Ol' Band From Texas employs the oldest li'l "continually run dance hall" an hour outside of town as a live rehearsal site for Messrs. Billy Gibbons, 70; Dusty Hill, 70; and Austinite Frank Beard, 70, who's outed as a local tax payer from his lakeside plot of Lake Travis in this new documentary.

Actually, "documentary" is too strong a term.

A couple suspect celebrities (Billy Bob Thornton, Josh Homme) find themselves halfheartedly edited together with vintage photos, a distinct lack of grainy live performances, and a couple music videos. A paucity of such materials necessitates animated narrative fills. Manager Bill Ham's mandate of no press to maintain the band's mystery means only his estate enjoys access to the real goods.

And yet because all of it draws power from ZZ Top, these 90 minutes glow latently radioactive.

From late Sixties video of seminal influence the 13th Floor Elevators to early Eighties MTV clips of the beards during the Eliminator era – and the film ultimately screeches to a halt there – this scrapbook delivers. All three band members crackle and cackle independent of each other, but in those deliriously brief Gruene Hall segments, ZZ Top's alchemical music miracle endures. The Blu-ray/DVD combo contains the 18-minute Gruene segment gloriously uncut.

At the point that Gibbons' Moving Sidewalks pull a New Yardbirds and morph into ZZ Top, Beard abducts him for a jam.

"It didn't take 30 minutes. It didn't take 30 seconds," recalls Gibbons. "I knew Frank Beard had the kind of chops I was looking for ... And at the conclusion, he said, 'Oh by the way, I know a bass player that would really round this out.'

"[Later], once Dusty took the stage, something magical occurred, and that first shuffle in C lasted for three solid, uninterrupted hours [laughs]. At the end, we pulled it to the curb and I said, 'You know what? I think this is going to work.'" – Raoul Hernandez

Loma: The Rind in Your Mind

Bandcamp
Released spring 2018, Dripping Springs' Sub Pop signees Loma recently made available as a free download The Rind in Your Mind, a 36-minute guided meditation gently coasting over a droning ambient sound collage. Frontwoman Emily Cross delivers a thoughtful spoken-word script encouraging the listener to get comfortable and relax their mind, softly engaging in a one-sided conversation, with vocal breaks to let the underlying tone develop its own kineticism. Bandmates Dan Duszynski and Jonathan Meiburg provide additional instrumentation, and the group offers an instrumental version of the same piece along with the download. – Greg Stitt

www.fb.com/events/2620663081395921
Songsmith, playwright, and social commentator Wild Bill Ogden put his money where his mustache is when he challenged Austin songwriters to write a tune about "coronavirus, social isolation, lost wages, closed clubs, and paranoia." His original cash prize of $100 quickly ballooned as fans chipped in. Entries – video or audio – can be posted or heard on the "Wild Bill's Online Songwriting Challenge (CV-19 Edition)" Facebook event page until Friday night. It's a novel concept for putting a little cash in a musician's pocket, because writing songs are how we process struggle and loneliness. – Kevin Curtin

www.luckreunion.com/tilfurthernotice, Thursday 19
Luck ran out last week on the annual Americana mini-fest at Willie Nelson's ranch, but the show goes on(line). The Family (Willie, Lukas, Micah) and Friends (Margo Price and Jeremy Ivey, Jewel, Nathaniel Rateliff) set up streams around the country for a virtual Luck Reunion, joined by Texas favorites like Paul Cauthen and David Ramirez, and emerging artists like Early James, Tre Burt, and Sunny War. Streams from Arlyn Studios capture the local cadre, and expect surprises in true Luck fashion. A good time to heed Lukas' advice to Turn Off the News (Build a Garden). – Doug Freeman

www.fb.com/events/1918930814905422, Thursday 19
Monte Warden was made just for these times. Unbridled energy often stems from an irrepressible spirit and an optimism to match, so it's no surprise this native Austinite drew early comparisons to a fellow Lone Star with an upward hair flip: Buddy Holly. How early? At 15, his Texan roots rockers Whoa, Trigger took home Best New Band at the 1983 Austin Music Awards. Warden returns to a Holly-esque Fifties crooning in his Dangerous Few guise, whose debut drops in June. They maintain their Continental Gallery residency, 8:30pm, on FB.– Raoul Hernandez

www.youtube.com/channel/UCpnjbHCefyMlab6lx__Lo5g, Friday 20, 8pm
No one this side of Alejandro Escovedo embodies Austin music better than Eric Hisaw, the self-described "roots rocker with punk leanings." His barking Telecaster and acoustic picking, torchy vocals, and songs about life lived hard and fast feel on point right about now. Friday, he performs his gritty twang-rock from his living room via YouTube. Whether his formidable band joins in is up in the air, so log in for now and let the hardscrabble begin. – Tim Stegall 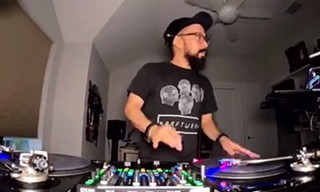 Local Podcasts: How Did I Get Here & Soundfounder

Tune in to Johnny Goudie and Andrew Brown
Musicians interviewing musicians can lead to unexpected, fascinating revelations in the camaraderie of struggle and technical knowledge. Johnny Goudie's informal chats with artists on longstanding ATX podcast How Did I Get Here continue without interruption, most recently digging into new work with Star Parks and Think No Think, while his archive of almost 900 shows provides weeks' worth of pretensions-dropped discussions both smart and charming. Likewise, Exploded Records owner Andrew Brown's interviews as part of his new weekly electronic Soundfounder show on KUTX dig deep with artists pushing envelopes like Flying Lotus and Kamasi Washington. Remarkably relaxed and insightful. – Doug Freeman

www.waterloorecords.com, www.endofanear.com
On Monday, End of an Ear and Waterloo Records both opted to end public store hours, instead offering curbside pickup alongside regular online offerings. Think of it as a drive-through, but for your much-needed analog quarantine materials. We've never had more time to go flip a record. Waterloo, open Mon.-Sat., 10am-7pm & Sun., 11am-7pm, instructs, "Simply call us at 512/474-2500 to place your order, and a staffer will bring your LP/CD/video out to your vehicle." End of an Ear is available noon-6pm daily and lists used records on the culty, highly educational @endofaneartoo Instagram account. Find both institutions online for shipped shopping. – Rachel Rascoe