Her first Austin album follows a character moving to L.A. 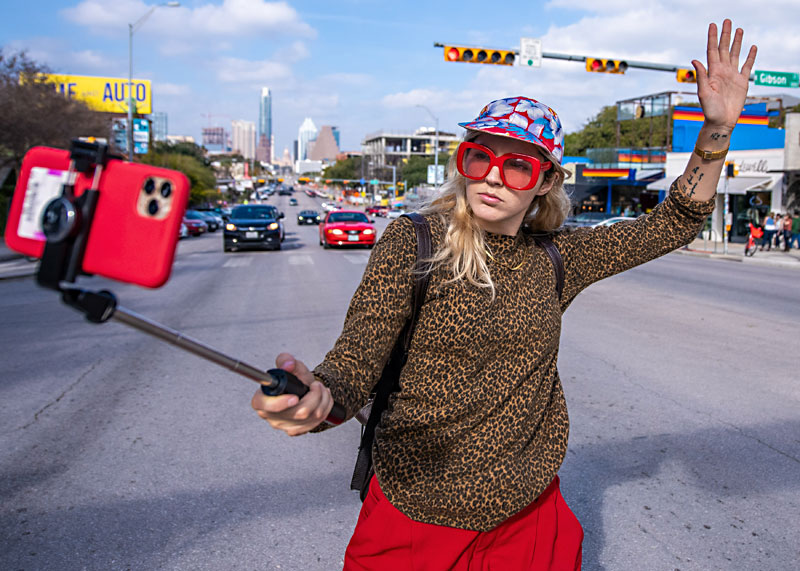 On Superstar, Caroline Rose follows a protagonist fueled by blind ambition en route to Los Angeles. Not coincidentally, after garnering acclaim for third album Loner in 2018, the singer planned her own California migration. Instead, she moved to Austin.

Here, drawn in by her girlfriend, Rose quietly crafted the bulk of Superstar.

"The stuff I'm talking about in the album was happening in real time when I was making it," the energetic 30-year-old explains. "As funny as it is – because it's about this character moving to L.A. – it's such an Austin record."

Due March 6, Superstar continues work with Nashville's New West Records, which at one point boasted an Austin office in its role as past and current arbiter of local talent spanning Alejandro Escovedo to Los Coast. Setting up the concept on opener "Nothing's Impossible," the LP's semiautobiographical lead receives a call to stardom from the Chateau Marmont hotel lobby. That begins an odyssey of inspirational choruses and bouyant synth-pop.

"The character in the album is a person that you can't tell if you love or hate," explains Rose. "I like that about them, because I waver between extremes."

Under Rose's celebrity scheme, lyrics tease at paranoia and fame's fleeting nature, but outside its thematic binding, the new material sounds like real-life documentation of moving cross-country and converting a long-distance relationship into cohabitation. In fact, its author now counts herself a resident of Austin's Bouldin Creek neighborhood – in a home shared by a veterinary technician and her two pit bulls. True to her monochromatic reputation, Rose pulls up to Elizabeth Street Cafe on a red bike, her face framed by chunky red glasses and a novelty red chili pepper necklace.

The staff knows her well enough to bring over pro bono macarons.

"The other day I was here, and my song came on," she laughs, "It's still really exciting to hear when you're not expecting it. Like, 'Whoa, this is so cool.'" Buzzing with thoughts on how to configure her expanded fivepiece band for upcoming tours, she's spent the last few days cooped up figuring out a midi guitar to trigger sleek studio sounds onstage. Rose would like to scale herself back to just one instrument for more active frontwoman theatrics. In past iterations, she dutifully slung her guitar diagonally over her back while playing keys.

Superstar marks her first largely self-recorded effort, helmed by Rose with a small cast of players in her 10-by-12-foot home studio. A friend of the Shakey Graves crew, the project manager at one point tasked engineer/Graves player Chris Boosahda with capturing drums in his Buda studio. The resulting instrumentals at times reach the dramatic heights of Tame Impala or St. Vincent.

"If I'm not steering the ship, I feel like it's being taken out of my hands," declares Rose. "Every time I've tried to do that, it hasn't worked out. On my own, I've walked around this entire city listening to mixes and editing work."

Walking, meaning multihour journeys around Austin, is a big thing for Rose. She strolls and dances across the country in her video for "Feel the Way I Want," filmed on a 13-day road trip from California to Florida. Locally, the clip includes Rose spinning along South Congress in front of Güero's Taco Bar.

A breakup anthem with a former self, the song rings with smooth defiance amid waves of keys as its author intones, "I took a pill and I hopped on a plane/ And I'm never ever looking back again." On visits to L.A., Rose says her strolls have revealed a much-loved "seedy underbelly," not to mention Scientology and alien conspiracists in tin foil hats. These lengthy foot travels also prompted the album's cheeky exploration of pill-popping, Paris weekends, and extreme luxuriance.

"I'm poking fun at things about my personality I find to be really embarrassing and shameful," reveals Rose. "It's about ambition and wanting to build something big. On paper, that sounds great, but in practice, you have to be a dick a lot.

"You have to leave people who love you and make sacrifices that can look really ugly."

“I’m poking fun at things about my personality I find to be really embarrassing and shameful,” reveals Rose. “It’s about ambition and wanting to build something big.”

She recounts being largely depressed during high school on Long Island, viewing her intense work ethic as a way out. After studying architecture at Wellesley College, the musician in her launched a career of twangy Americana while based in Burlington, Vt. Her more forthright, but still spunky, former self is preserved in a 2015 NPR Tiny Desk concert.

"Wherever the weirdos go is where I'll probably always feel most comfortable," she says. "There's something special about art scenes that aren't about just getting rich and famous. People need to stay connected to why we make art in the first place."

Under its outlandish Hollywood concept, Rose's new album levies a genuine argument for artistic expression. Littered with funny turns of phrase, it's not as outwardly kooky as synth-pop lead-up Loner, widely regarded for clever satire woven into cinematic pop. For Rose, Superstar presents another grand experiment.

"I'm on this weird journey with the character in the album, which is 100 percent based on my life," she decides. "It ends, and you don't really know if this person has gone crazy or had some kind of realization. I still don't know how it's going to turn out."

A version of this article appeared in print on February 21, 2020 with the headline: Walking in L.A. 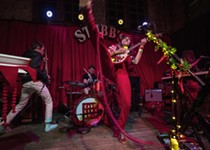