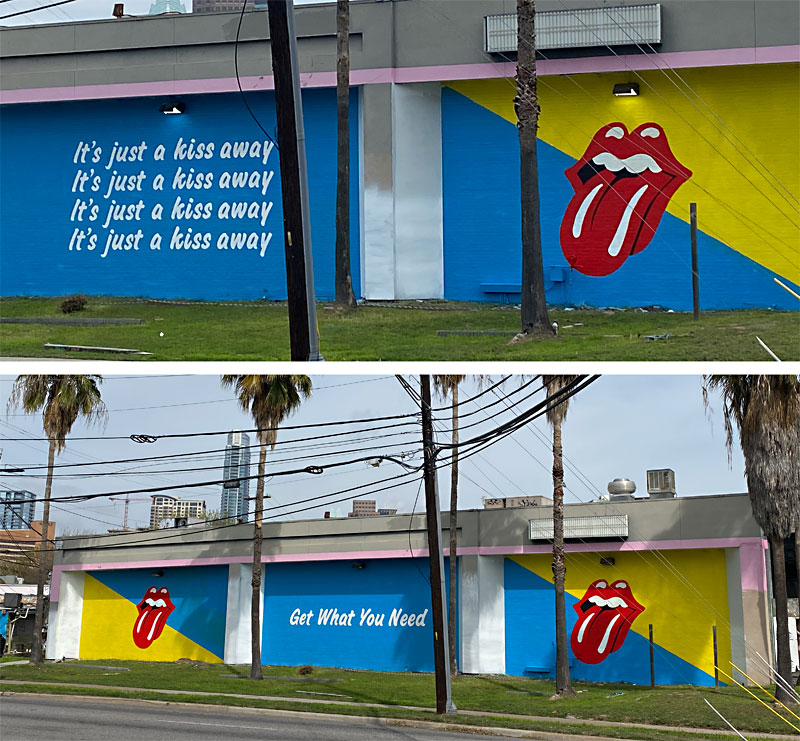 Can’t You Hear Me Knocking: The Rolling Stones mural on Monday (top) and again on Tuesday (bottom) (Photos by Gary Miller)

This morning at 6am, the Rolling Stones, Circuit of the Americas, and promoter AEG Presents’ Concerts West confirmed what the Chronicle learned last week and reported on Monday: Jagger, Richards, Watts, and Wood will perform on the local racetrack’s grounds on Sunday, May 24 – the day before Memorial Day. The English rock & roll icons announced a continuation of their No Filter tour, which began in 2017. Fifteen shows between San Diego on May 8 and Atlanta on July 9 include two Texas dates: Austin, fifth concert in the lineup, and Dallas on May 29. Tickets for the local spectacle go onsale Friday, Feb. 14, 10am.

Last week, the Chronicle learned the Rolling Stones have scheduled a concert at Circuit of the Americas for Sunday, May 24 – Memorial Day weekend. On Monday morning, that still-unpublicized news seemingly confirmed itself with a Downtown art tag. The mural at 110 E. Riverside – onetime site of "ultimate ladies club" La Bare (male dancers for women) and, briefly, Sixth Street live music venue Steamboat – then changed again on Tuesday. Whereas "It's just a kiss away," a lyric from "Gimme Shelter" repeated four times, adorned the thoroughfare to start the workweek, 24 hours later a snippet of "You Can't Always Get What You Want" complemented the graphic with "Get what you need." 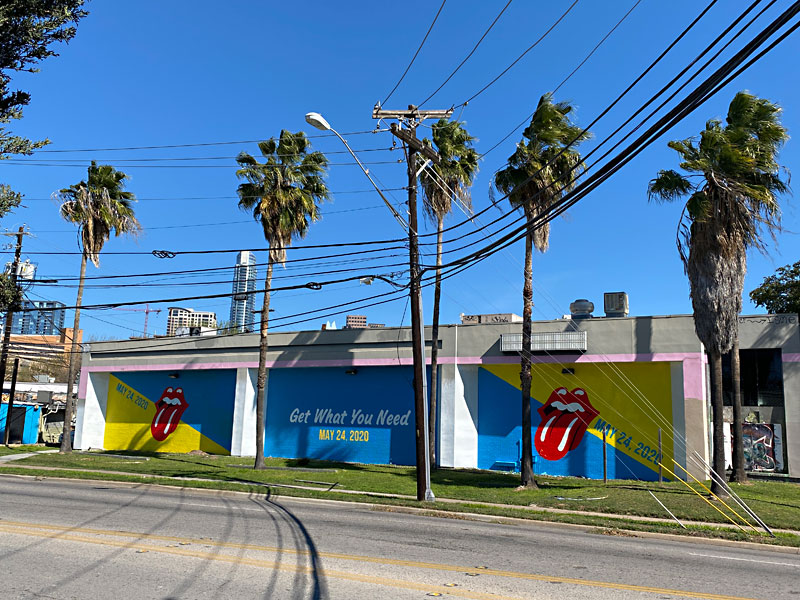 On the UK quartet's 2017-19 No Filter tour, which docked in only one Texas locale last year (revisit "The Rolling Stones Storm Houston in Only Texas Date," July 29, 2019), the group's advance team planted a pair of Warholian lips in the cities hosting the 58-year-old British Invasion survivors. Neither the legendary band nor its PR team, pioneers in rock & roll publicity since day one, have announced a spring jaunt, but the venue – configuring the show around the racetrack as they do for F1 events rather than SRO'd into the amphitheatre – and personal accommodations for band members themselves are already on the local books, according to industry sources across multiple Central Texas cities.

The Stones – Sir Mick Jagger, 76; Keith Richards, 76; Charlie Watts, 78; and Ronnie Wood, 72 – last performed in Austin on Sunday, Oct. 22, 2006, during the A Bigger Bang Tour. The show appeared on DVD the following year in a box set commemorating the promotional trek. What many believed a once-in-a-lifetime event, the Rolling Stones in Austin's Zilker Park (see review, "TCB Music News: You Got Me Rocking," Oct. 27, 2006), now hopefully prompts lightning to strike twice in the live music capital.

A version of this article appeared in print on February 7, 2020 with the headline: Rolling Stones Headed for COTA